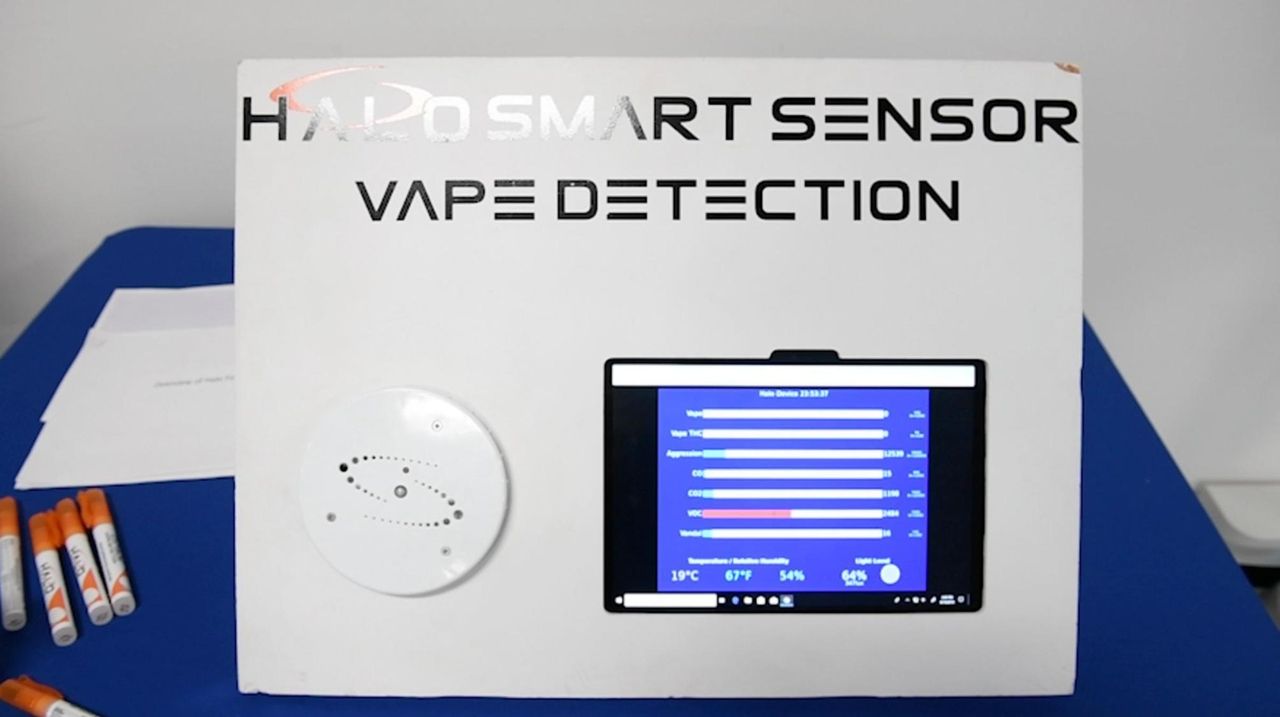 As a new academic year opens, schools on Long Island and elsewhere are installing the sensors amid warnings of an "epidemic" among U.S. youth using vape pens, also known as e-cigarettes, which can deliver nicotine or THC, the psychoactive ingredient in marijuana.

Adam Wandt, a professor at John Jay College of Criminal Justice in Manhattan, said most e-cigarettes do not set off smoke detectors and their stealth tempts users to vape in places "where they would never have lit a cigarette" — including in schools, movie theaters and airplane bathrooms.

"It's becoming way too easy to use nicotine and drugs without leaving trace evidence," he said.

The sensor devices from Hauppauge-based Soter Technologies LLC and holding company Advance Convergence Group of Bay Shore can detect vaping in general, but also can specify when THC is being used.

The devices — the FlySense from Soter Technologies and the Halo Smart Sensor produced by Advance Convergence Group and affiliates IPVideo Corp. and A+ Technology & Security Solutions Inc. — can be installed in high school bathrooms.

The units also provide alerts related to temperature, humidity and loud noises that could suggest bullying or other problems.

The Halo and FlySense make no video or audio recordings because of privacy concerns, but they can detect spikes in sound that can be reported to authorities.

Derek Peterson, founder and chief executive of Soter Technologies, said FlySense installations have grown from 100 in 2017 to more than 6,000 currently in 46 states and 12 countries.

As of late August, more than 30,000 vaping incidents   had been detected by FlySense devices globally  since January, according to the Soter website.

Peterson, a 16-year veteran of Holtsville barcode pioneer Symbol Technologies, said closely held Soter, with 30 employees, is moving to a new facility in Ronkonkoma this month.

"We believe we could become the next Symbol," he said, referring to the Holtsville company that notched more than a billion dollars in annual revenue until an accounting scandal led to its sale.

David Antar, chief executive and majority shareholder of Advance Convergence Group,  with annual revenue of about $35 million, said demand for the Halo has been accelerating.

"We started designing a sensor for areas ... in which you cannot place a camera over four years ago, and once vaping hit epidemic levels in the schools, we realized we were able to solve a major problem for school administrators," he said. "It's really taking off."

Bernadette Burns, superintendent of the West Islip school district and president of the Suffolk County School Superintendents Association, said the district installed a Halo device in a  high school bathroom in 2018 and has purchased six more for the upcoming school year.

Burns declined to specify how many vaping incidents have been detected since installation but said it's an ongoing problem.

"More students seem to have vaping devices, but whether it is due to increased use or increased vigilance on the part of the staff would be difficult to determine," she said in an emailed statement.

In July 2017, New York State banned e-cigarettes on school grounds and in November of that year extended the ban to all places where cigarettes are prohibited, such as restaurants, bars and workplaces.

Advance Convergence, with 85 employees, also has an office at Stony Brook University's Center of Excellence in Wireless and Information Technology, where researchers are working on a software update that would allow the Halo to tell the difference between sounds like breaking glass, gunshots and threatening words, and issue appropriate alerts.

The company also is running a pilot project with a unit of Marriott International Inc., the Bethesda, Maryland, lodging giant, and is in talks with marijuana growers, who see potential in the device's humidity and light-measuring functions, Antar said.

"We look at the Halo as the poster child of enterprise IoT [internet of things] devices," Antar said.  "This device is all about air quality and tying into building management."

The Internet of Things refers to networks of devices, software and sensors that can interact and exchange data.

In December 2018, U.S. Surgeon General Jerome M. Adams issued an advisory, warning of an "epidemic" in e-cigarette use by the country's middle and high school students.

More than 3.6 million middle and high school students nationwide had used e-cigarettes within the past 30 days, according to a 2018 survey conducted by the Food and Drug Administration and the Centers for Disease Control and Prevention. That marked a 1.5 million increase compared with 2017.

Nicotine exposure during adolescence can impact "learning, memory and attention," according to the surgeon general.

A study by researchers from the University of Pennsylvania School of Medicine published in August by the journal Radiology found that inhaling e-cigarette aerosol, even without nicotine, impaired blood flow in healthy, nonsmoking adults.