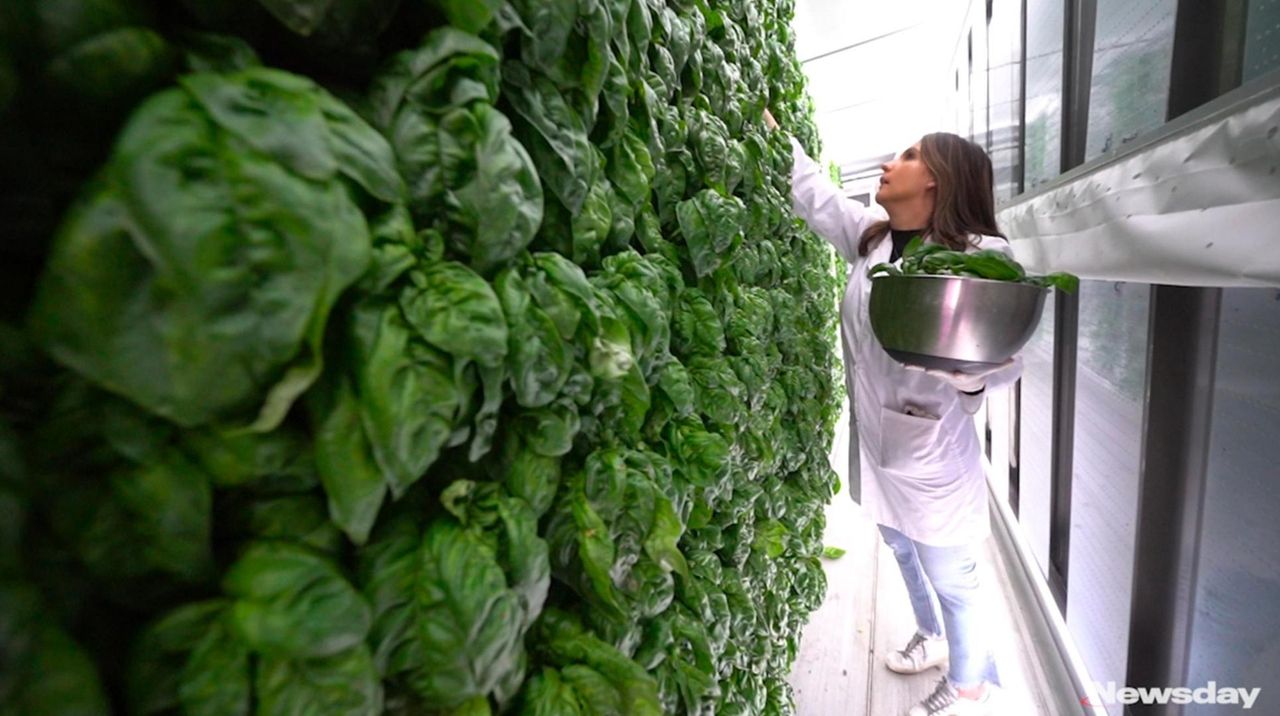 A Long Island vertical farm that stacks lettuce and herbs inside climate-controlled shipping containers is reinventing how to grow sustainable fresh produce. Co-founder and CEO of HydrOrganic Farms, Ryan McGann, explains why he thinks this is the future of farming.  Credit: Randee Daddona

A startup tucked into a Long Island backyard is planting the seeds of an agricultural revolution that a co-founder calls "Farming 4.0."

The agriculture of tomorrow will take place in automated vertical farms that move production almost to the edge of the consumer's plate, according to Ryan McGann, who founded HydrOrganic Farms LLC with his wife, Aneta.

The family farmers are working to prove that concept inside three 40-by-8-foot shipping containers behind their East Setauket home.

There herbs and greens are bathed in nutrient solutions and blue and red LED light. The plants — kale, cilantro, rosemary, thyme, basil and romaine and Bibb lettuce — grow sideways out of foam and wicking strips on walls that move on tracks.

Unlike a greenhouse, the container admits no sunlight.

"This is definitely the future of agriculture," said McGann.

How soon that future arrives will depend on economic factors, particularly the cost of energy, said Neil S. Mattson, a professor in Cornell University's College of Agriculture and Life Sciences.

Vertical farms use roughly twice the energy of conventional farms even when long-distance transportation from conventional growers is included in the calculation, he said.

But Cory Mahony, owner of Urban Fields Agriculture, a vertical farm in Patchogue, said that in most months his power bills are higher than the rent he pays on his 1,000-square-foot facility.

For now, he said, vertical farms will have to focus on high-value perishable crops with short growing cycles, such as herbs, leafy greens and edible flowers.

High-volume row crops such as corn may remain out of reach, but vertical farms do enjoy a distinct technological edge.

By tuning the nutrient mix, lighting and climate, vertical farmers can replicate growing conditions a world away.

One vertical farm, Oishii in Kearny, New Jersey, sells exotic Omakase strawberries, originally from the mountains of Japan, to high-end restaurants and markets. The cost at Eli's Grand Central Market in Manhattan: eight for $50.

In East Setauket, McGann is growing Genovese basil by sprouting seeds from Italy and replicating the climate and nutrients of the Italian original.

"You have the ability to dial in the environment very specifically," he said. "If a chef wants Genovese basil, we import the data and grow it locally."

McGann said he also is experimenting with strawberries, radishes, beets, vanilla and saffron.

Another potential high-value crop is cannabis, whose properties could be tailored to the market, he said. In March, HydrOrganics was approved to produce hemp and CBD for a New York State pilot project.

These days he and Aneta, who grew up on a farm in Poland, transplant seedlings into the walls, adjust the light and nutrient mix and harvest the mature plants.

As with a traditional family farm, their children — Mia, 2 months, Kai, 2, and Finn, 5 — also visit the operation.

After harvest, McGann loads the produce into a van, delivering it to direct to restaurants, including Ella's in Huntington and Old Fields restaurants in Setauket and Port Jefferson.

"We're working out the kinks, coming up with processes and increasing the automation," said McGann, who got the specially outfitted containers in September. "Since we harvest and deliver within 24 hours, [the produce is] way more nutrient dense then what you'd get from a farm in California."

Each container has four grow walls and produces about 4,000 heads of lettuce a month, equivalent to about one acre of traditional farmland, he said.

The containers also have an area for seeding trays.

But McGann, who has a master's degree in mechanical engineering from Stony Brook University and is a veteran of several technology startups, sees the family farm as just the beginning.

"This is a more distributed model of agriculture," he said. "Agriculture has been relatively unchanged for a long time."

The big idea: Increase the automation and decentralize agriculture, bringing it out of the field by installing highly autonomous containers near customers and managing those containers from anywhere via an internet connection.

Mahony, a former bartender, started growing greens as a hobby, giving them away to friends, but turned it into a business when demand was brisk.

He opened Urban Fields in September 2019, shortly before the COVID-19 pandemic, growing basil and other microgreens.

Unlike McGann's operation, Urban Fields grows its crops in horizontal layers. Plants in floating rafts grow up toward the LED lights while their roots stretch down into a nutrient bath.

Mahony, who plans to move to larger quarters, recently cut a deal to supply all nine Long Island locations of Giuntas Meat Farms with his packaged basil, microgreens and pesto sauce.

Long Island had 567 farms (including seven in Nassau County) as of 2017, according to the U.S. Department of Agriculture.

Vertical farms remain scarce on Long Island and around the country. Still, they are gaining the notice of venture capitalists and other investors.

In March, 17-year-old AeroFarms, based in Newark, New Jersey, announced that it had agreed to a transaction to go public through a special-purpose acquisition company.

AeroFarms, which markets its products under the Dream Greens brand, said that it would trade on the Nasdaq under the ticker "ARFM."

Two other vertical farms, San Francisco-based Plenty and Manhattan-based Bowery, together have raised hundreds of millions of dollars in venture funding.

Another startup funded by venture capital, Seattle-based iUNU, is developing artificial intelligence and computer vision systems to help growers create the ideal mix of nutrients and climate for indoor farms.

"The COVID-19 pandemic showed how broken the centralized model is," he said.

We're growing the future "one seed at a time," he said.

Pros and cons of vertical farms

•An enclosed environment shields crops from insect pests and contaminants like listeria and salmonella, meaning pesticides and fungicides are not required;

•Climate and hours of daylight are untethered from geography and the growing season is continuous;

•Crop yield per square foot is higher than conventional agriculture;

•Units can be located close to the consumer, reducing transportation costs;

•Water can be efficiently recycled, reducing consumption to a fraction of a traditional farm.

•Sunlight is free and bountiful for traditional farms, while vertical farms must bear electricity costs for sensors, automation, climate and lighting;

•Higher costs and limited space force vertical farms to focus on high-revenue crops such as herbs and leafy greens rather than row crops such as wheat and corn that require a lot of space.