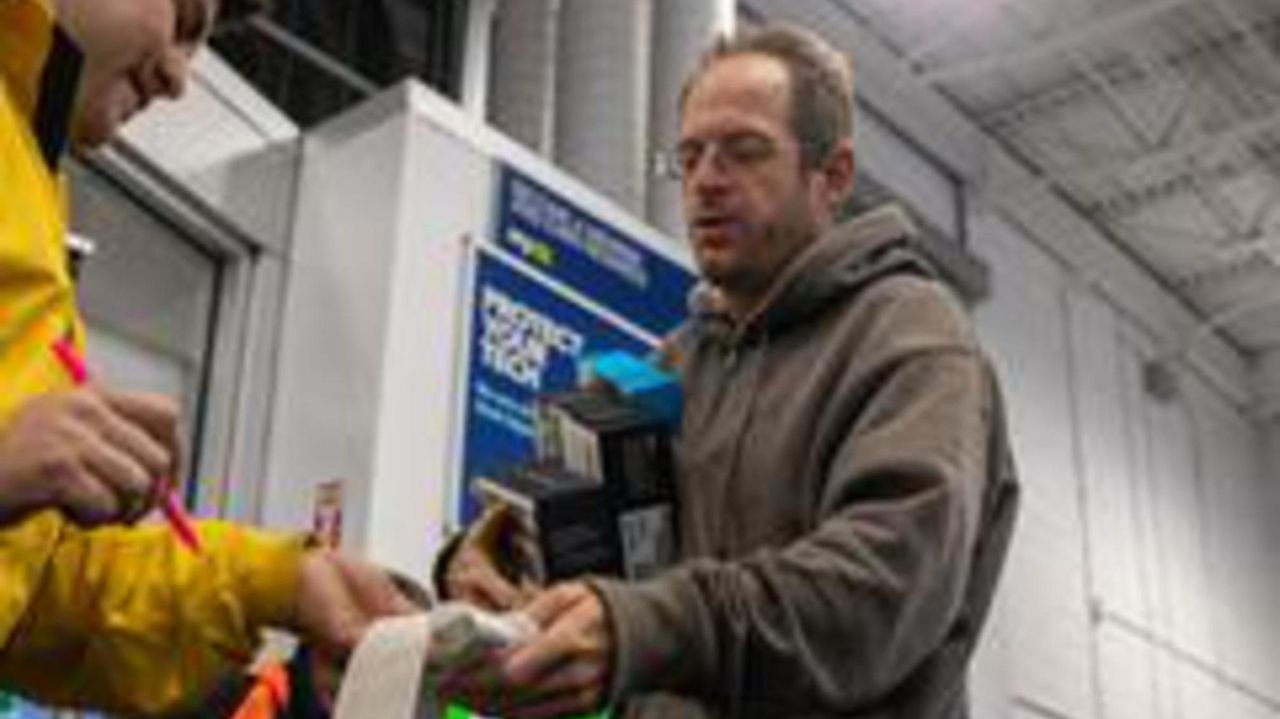 Shortly after giving thanks for all they had and feasting with loved ones, thousands of Long Islanders headed to stores Thanksgiving Day searching for deals on everything from candles to can openers.

Most large-chain department and discount stores were open Thursday night, the result of a decadelong trend that has seen Black Friday lose some of its luster as retailers compete with online shopping and spread discounts over the entire holiday season.

Stores open Thursday included Kmart, which started the day at 6 a.m.; JCPenney, 2 p.m.; Best Buy, Kohl’s and Target, all at 5 p.m.; and Walmart, which had normal Thursday hours although holiday sales didn't start until 6 p.m.

Around 4:30 p.m., about 30 people were lined up in the cold outside the Best Buy in Riverhead waiting for the 5 p.m. opening.

They came for the doorbusters, which are items on sale for a only limited amount of time. The bargains included a 58-inch Insignia TV for $199.99 versus the regular price of $479.99 and a Samsung Chromebook for $89 instead of $189.

"Once they get inside, they're guaranteed to be able to buy it within three hours," said Andrew Mercado, a computing supervisor who was handing out doorbuster tickets to people lined up outside.

Shirley resident Tierra Lewis, 35, arrived about 3:20 p.m. and was the first in line, there to buy a 70-inch Samsung TV for herself and gifts for her siblings.

She defended her annual tradition of shopping on Thanksgiving.

"Well, I believe that Thanksgiving is a time to gather with family. But it shouldn't be the only reason … You should spend time with family regardless, not just on the holiday," said Lewis, who said she spends time with her family throughout the year.

Outside a Kohl’s in Massapequa it was cold and windy but a small group of people, undeterred by the weather, huddled together as they waited for the store to open at 5 p.m.

Kelly Dipretoro, 37, of Merrick, said she was not a big fan of Thanksgiving Day shopping, but some of the deals were so great she couldn’t stay home.

“My six-year-old son Tony said he really wanted a Nintendo Switch but didn’t put it on his Christmas list because he said he didn’t think Santa could afford it,” said Dipretoro, who teaches first grade at Abbey Lane Elementary School in Levittown.

“I didn’t think so either at first but I’m saving so much money by buying the Switch here today.”

At Kohl’s, the price for the Nintendo Switch Console with carrying case and controller charging dock was discounted from $349 to $319 and customers who purchased it were automatic recipients of $90 Kohl’s Cash dollars.

“I’m going to use it to buy items I plan to donate to a child I adopt for Christmas at my church and for a family I sponsor at my school,” Dipretoro said. “The Kohl’s Cash is really helpful because money is tight.”

Nearby Philip Cantelmi, 46, of Lindenhurst, said he didn’t mind waiting in line to shop.

“The deals are just too good,” he said. “You can’t beat the prices and at Kohl’s it’s so much cheaper than at other stores because they give you Kohl’s dollars.”

Cantelmi and his wife were interested in buying a Nintendo Switch and a Shark vacuum cleaner. The Shark vacuum was advertised by Kohl’s at $84.99 with a 15% coupon. Its regular price: $299.99

Massapequa Park resident Jay Saltzman, 77, joked he may have to plead for his wife to let him back into the house.

She wasn’t a big proponent of him leaving the home on Thanksgiving Day to go shopping, he said.

“Everyone’s at home waiting for me to get back so we can all eat together,” he said. “But I do get some points because I cooked it all.”

Saltzman — with the booklet advertising the store’s doorbuster items in hand — however, made the trek to a Kohl’s in Massapequa in search of a variety of novelty items.

“We celebrate Hanukkah so I’m looking for some jelly beans, some candles, and a few other surprise gifts … I don’t want to give it all away,” he laughed.

Tiger Zou, 25, who lives in Flushing, Queens, was at the store “just to look.”

“There are great deals,” he said. “It’s definitely worth it and much cheaper so I’m sure I”ll find something.”

Zou said he was looking to buy “some Christmas presents” and “something for myself.”

Earlier there were a few shoppers at the Kmart in Bohemia on Thanksgiving morning. The store will close permanently in February after 29 years in business. Large signs in the windows and hanging from the ceilings said that “Everything Must Go” and “Huge Inventory Blowout.”

"We’re upset this store will close,” said Centereach resident Phyllis Knowles, 64, who was shopping with her husband.

In their shopping cart were clothes, a mixer and a can opener. The sale prices were good, Knowles said. The couple typically shop on Thanksgiving every year.

Susan Champlin, 56, and her mother, Agnes White, 80, both of Lake Grove, each had a shopping cart in Kmart. “I come here for all my goodies for my grandchildren and great-grandchildren,” White said. “I don’t count them. I just enjoy them.” The two often shop on Thanksgiving but not at night because they want to avoid the crowds, Champlin said. She likely would shop online Thursday night at Amazon, Macy’s, Walmart and Sears, she said.

An estimated 165.3 million people will shop in stores and online between Thanksgiving and Cyber Monday, according to a survey of 7,917 adult consumers by the National Retail Federation, a Washington, D.C.-based trade group.

Although data on in-store Thanksgiving spending was not yet available, online spending broke records — exceeding $4 billion, according to Adobe Analytics, which projected a total of $4.4 billion in online spending Thanksgiving Day. By 5 p.m., $2.1 billion had been spent online, which was a 20.2% increase compared to the same period last year.

Thanksgiving is not among the Top 10 days for foot traffic or sales revenue in stores during the season. Black Friday will likely still reign as the busiest shopping day this year in terms of customers in stores, but the top day for spending is projected to be Dec. 21, the Saturday before Christmas, according to RetailNext, a San Jose, California-based retail analytics company.

“The only reason they’re really open on Thanksgiving is they’re afraid that competitors may be open when they’re not,” he said.

And one retail expert says even that may be changing.

“We expect that in the future more retailers will choose to stay closed because their growing e-commerce capabilities will enable them to compete on that day anyway,” said Joel Rampoldt, a managing director in the retail practice at AlixPartners, a Manhattan-based consulting firm.

1:33
Issuance of minor summons turns into dangerous struggle
Bridge in Lawrence to be renamed for civic leader
Report: Thousands of MTA employees don't use time clocks designed to prevent fraud
Ever wanted to own a fire truck? You can bid on this 20-year-old pumper.
Proposed downtown development on tap at public hearing Tuesday
LI daily COVID-19 case total tops 400, state data shows
Didn’t find what you were looking for?