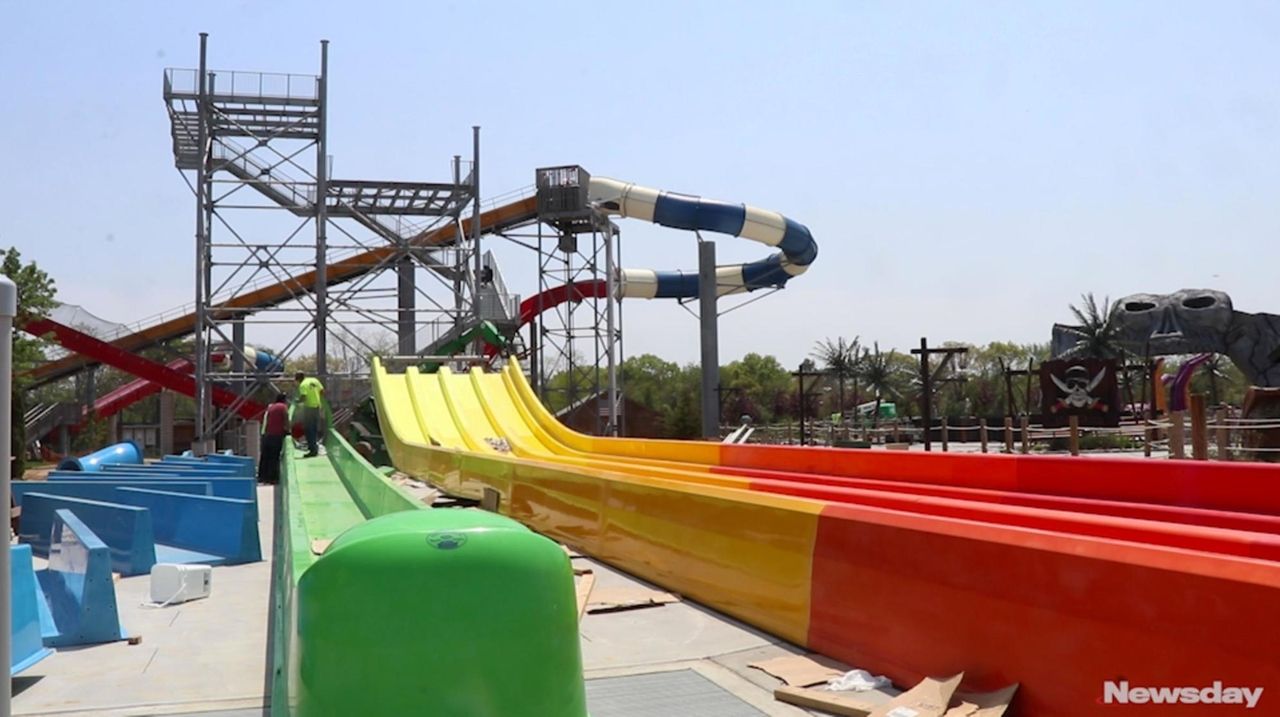 Splish Splash in Calverton has been preparing for the summer season and will have two new rides.  Credit: Jessica Rotkiewicz

The weather has been cool and rainy, gas prices are rising and political turmoil is ever present. But Long Island's tourism industry expects these storm clouds to dissipate as a strong economy keeps travel and leisure spending robust.

With the summer vacation season set to begin Friday leading into Memorial Day weekend, local tourism promotion officials say they expect the industry to grow beyond the last estimate they have from a consultant: $5.6 billion in total spending in 2016.

"I see a slight uptick," said Kristen Jarnagin, president and chief executive of Discover Long Island. the region's chief travel promoter. The group has no estimate yet for 2017's total revenue, but it believes there was some growth.

The totals include revenues from hotel stays, restaurant meals, visits to beaches, parks, wineries, resorts, amusement parks, museums and other attractions, and related retail purchases such as gasoline.

The figures compare to a recent low of $4.4 billion in 2009, the year the last recession ended. And 2016's $5.6 billion represents a 3 percent increase from 2015, according to the consultant to Discover Long Island, Tourism Economics, a unit of the English forecasting firm Oxford Economics. Statewide, tourists spent about $65 billion in 2016, according to Tourism Economics. New York City accounts for about 65 percent of total revenues. Leisure and hospitality employed 119,200 people on Long Island in March, the last month for which data are available, according to the state Labor Department. That figure was up 3 percent from a year earlier.

Last summer, employment in the sector peaked for the season in July at 144,000. The labor department said that was a record high for any month in its archives, which go back to 1990.

Martin Melkonian, a Hofstra University associate professor of economics, says that, overall, signs point to another strong year for travel and leisure, but he added: "I don't think there's going to be much of a change from last year. The economy is OK, but I wouldn't describe it as full employment because of the fact that we have so many part-timers and low-wage workers in the economy."

Boding well for a strong tourism season this year are relatively low unemployment rates — 4.6 percent on Long Island in March, according to the state Department of Labor.

Meanwhile, President Donald Trump's tax overhaul has increased take-home pay for many Americans, as well as improved many corporate bottom lines and increased the values of stocks in 401(k) retirement accounts and other investment vehicles.

Balanced against those positives are a slight dip in consumer confidence in the metropolitan area in March from a month earlier over the recent trade dispute between the United States and China over imports, and on the volatile ups and downs of Wall Street, said pollster Doug Lonnstro of The Siena College Research Institute. Still, the number of residents who are optimistic about their immediate financial future is larger than the number who are pessimistic.

A potential negative for travel, by car at least, is gasoline prices, which have been on the rise this spring to levels not seen since 2014, mostly from increasing crude oil costs.

Regular gas averaged $3.075 a gallon in Nassau and Suffolk on Friday morning, according to AAA, up 54.9 cents from a year ago when the average was $2.526.

In a survey in March for the AAA, 40 percent of respondents said a rise in price to $3 a gallon would affect their driving habits, said Robert Sinclair, spokesman in the AAA's Garden City office. But "if people already have their plans in place, they're probably not going to cancel," he said. "For spur-of-the-moment trips, gasoline prices might weigh into the game."

Executives at Jake's 58 Hotel and Casino, which opened in Islandia last year and already draws 85 percent of its business from a 30-mile radius, think high gas prices might lead some gamblers to pass on trips to Atlantic City and other distant points to try their luck closer to home on the casino's 1,000 machines. "We're looking forward to the summer," said manager Chuck Kilroy. Jake's is Long Island's first video lottery casino.

Weekly attendance averages about 50,000 at Jake's 58, a spokesman said.

The gains in occupancy came despite a harsh winter, including four nor'easters in March.

Hotels are major revenue generators, along with restaurants, said Jarnagin, whose organization has stepped up its marketing efforts for the offseason and, starting last year, forged closer ties with tourism promotion officials in New York City.

At Long Island's largest hotel, the 615-room Long Island Marriott in Uniondale, general manager Paul Evasick predicts a strong year. The facility had a relatively weak 2017, Evasick said, when it was undergoing an extensive renovation, including a new lobby and restaurant, new windows, and new heater/air conditioning units in every room. Occupancy was off by 10-15 percent last year, he said, but now it's back in the 80 percent range.

"I expect a very strong summer," he said.

About 40 percent of his guests are business travelers on weekdays, but the proportion of leisure travelers rises on the weekends, he said, with guests drawn by events such as those at the NYCB Live’s Nassau Coliseum nearby.

Hotels have growing competition to contend with; websites like San Francisco-based Airbnb, founded in 2008, matches travelers with owners of private houses, apartments, single rooms or operators of bed-and-breakfasts, all for relatively short terms and usually for vacations.

But some local parks bucked the trend last year, thanks to improvements made as part of a 10-year, $900 million upgrade to state parks, Gorman said.

Attendance at Heckscher State Park in East Islip was up 6 percent last year, to 1,068,060 people. "We've made a number of improvements there, including reconstruction of the bathhouse," Gorman said.

Sunken Meadow had the largest increase, almost 23 percent to 3,535,216. Gorman credits improvements that included a reconstructed bathhouse, habitat restoration and upgraded utilities, along with events at the park's restaurant and catering hall, The Pavilion at Sunken Meadow. "July Fourth was very nice, and Sunken Meadow filled to capacity that day," Gorman said. "We had to divert traffic from the entrance, for the first time in three years."

The 96-acre Splish Splash in Calverton, Long Island's largest amusement park, has added two new rides for its 2018 season, which begins Saturday. They're called Riptide Race and Bombs Away. Attendance at the park is estimated at about 500,000 people per season by the Themed Entertainment Association of Burbank, California. The park doesn’t disclose attendance figures, but Splish Splash sales and marketing director Gamini Perera said rainy, overcast, weather cut into business last year. For 2018, he said, "We're hoping for a dry and happy and hot summer."

Attendance and revenue are up so far this year. "If there was any break in the weather, if it wasn't icy or just ridiculous, people just had to get out, and they came to the wineries," she said.

This year, she said, the vineyard has created new indoor and outdoor spaces for tastings and has expanded its winery tours to allow guests to stroll the fields. The family-owned business does not report revenues, but "we were up for last year and for the first quarter of this year," Martin said.

At the Long Island Wine Council, a trade group based in Riverhead, acting executive director Steven Bate said the industry consists of about 60 companies, ranging from grape growers to grape-growing farm operations that also make wine and have tasting rooms. The Long Island companies produce about 500,000 cases of wine a year, the group says. Roughly 1.2 million people visit the tasting rooms and fields, Bate said, but the season probably got a late start this year because of cold in March and April: "Generally, when the first warm weather comes, we do get a surge of people coming out."

For the Island's 5,500 to 6,000 restaurants, 2018 is likely to be another year of minimal gains and a struggle against rising costs, including gradual increases in the state's minimum wage, and competition from large chains, said Mario Saccente, executive vice president of the New York State Restaurant Association’s 500-member Long Island chapter. "I would expect very moderate growth this year," he said of his members, who tend to be smaller operations.

In Montauk, co-owner George Filopoulos of Gurney's Montauk Resort & Seawater Spa forecast occupancy of about 85 percent for this month and in the low 90s for June. With 146 rooms and 20 single family residences, Gurney's is the largest hotel on the East End.

Filopoulos and a partner purchased the 107-room Montauk Yacht Club Resort & Marina this month. The partners plan a $13 million winter renovation of the yacht club with its 232-slip marina. Work is to include refurbishment of all three of its restaurants, along with moving the main lobby and making extensive exterior changes to the 35-acre site.

It will be renamed Gurney’s Montauk Yacht Club & Resort.

Filopoulos said the original Gurney's had a strong year in 2017, with weekends sold out and overall occupancy in July and August ranging from 95 percent to 99 percent. He was expecting about 85 percent for this month and occupancy in the low 90s for June.