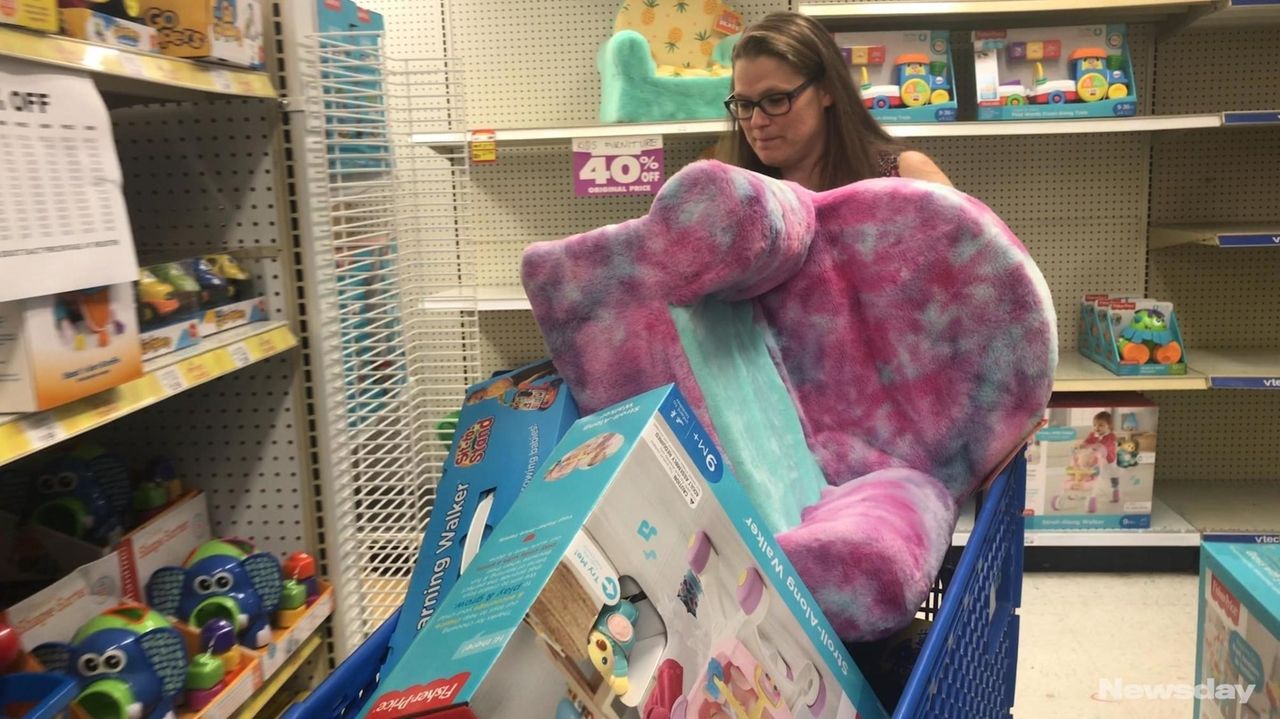 As Toys R Us winds down its U.S. operations, Long Island parents are taking advantage of deep liquidation discounts to stock up on toys for holidays and birthdays.

In March, shortly after the bankrupt chain announced it would close all of its stores, including 12 Toys R Us and four Babies R Us locations on Long Island, some shoppers grumbled about discounts that were often only 10 percent.

But the discounts have grown, as some LI stores have closed and others get closer to their final days.

The sales are now “better than on Black Friday,” parents said last week. Some have scoured the remaining stores in search of specific toys wanted by their children.

Others, like Emily Ciancarelli of Port Jefferson, are simply seeking the latest markdowns.

In March, she shopped at a Babies R Us in Massapequa the last week it was open. “That final week, items were 70 to 90 percent off,” she said. “I bought a brand-name jogging stroller for $225 which originally sold for $450.”

Ciancarelli, whose son Jameson is 18 months old, said she’s going to keep a close eye on liquidation sales and plans to visit different locations to see what she can find.

Allison Lemaire Koutsis of Merrick said Christmas gifts for her daughter are now crossed off her holiday to-do list. She stocked up on toys for the toddler at a Toys R Us in Massapequa.

“I bought so many things … a Little People bus, plane, and doll house; a Fisher Price tea set; and a baby walker,” she said.

Lemaire Koutsis said she didn’t buy many toys for her 5-year-old because she was unsure what he’d “be into by Christmas.”

But she did take him to the Carle Place Toys R Us store and let him pick out a toy in celebration of his preschool graduation: an Imaginext Batman bat cave marked down to $17 from $35.

Amy Von Walter, Toys R Us executive vice president of communications, said store closing dates will vary, depending on how quickly each location sells out of inventory.

At least two Long Island stores, in Valley Stream and Carle Place, will close by Wednesday, according to Worker Adjustment and Retraining Notification, or WARN, filings that Toys R Us submitted to the state Department of Labor.

Tara Howe of Merrick said that although she stocked up on Hanukkah, Christmas and birthday gifts for her two sons, Jakob, 5, and Dylan, 2, whose birthdays are two days apart in October, she has other plans for the rest of the discounted items she snagged.

She said she bought “Barbie dolls, craft kits, cars, just random and inexpensive small items” to donate to children who will spend their holidays in the hospital.

Howe said she’s personally “witnessed the fear kids can experience when in the hospital,” and she knows “it can be especially sad around Christmas, if kids [who are hospitalized] feel that Santa isn’t coming.”

She said she hopes the toys put a smile on the faces of the children who receive them and can help them forget about where they are.

Howe said she hopes others in the community, who may not otherwise have an opportunity to be generous, can take advantage of the Toys R Us liquidation sales and follow suit.

She said, “My family is by no means wealthy, but this is a great chance in which I can, and I’m sure others could, afford to be generous.”