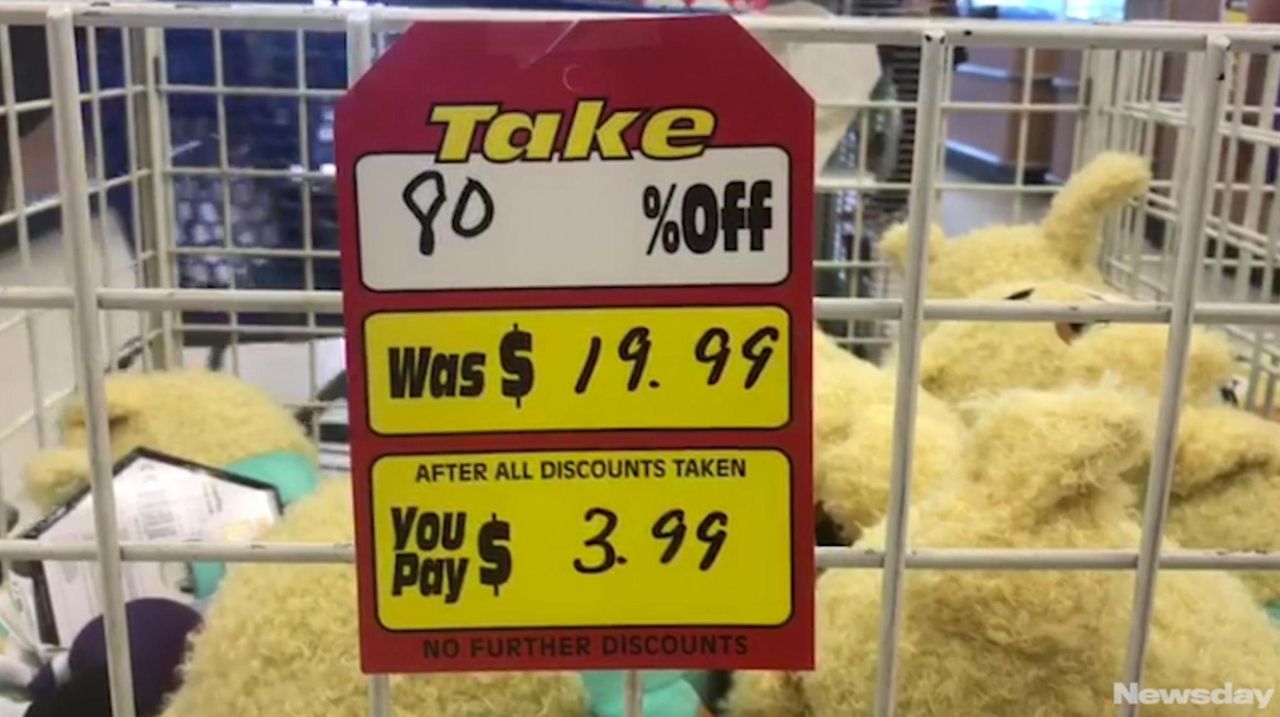 Friday marks the last day of business for bankrupt toy retailer Toys R Us, and Long Islanders turned out on Thursday to bid the retailer farewell.  Credit: Newsday / Daysi Calavia-Robertson

Long Islanders turned out Thursday to say goodbye to Toys R Us stores, the last of which will close by Friday.

It's the end of a chain known to generations of children and parents for its sprawling stores, brightly colored logo and Geoffrey the giraffe mascot. The company filed for bankruptcy last fall.

Catherine Tarko, 66, of Roslyn, visited a Toys R Us store in Carle Place with her 11-year-old niece Isabella.

"I just felt like we had to come and visit the store one last time," she said.

"We made so many memories here. I remember bringing my daughter Nicole, who is now 26, and how happy she would get every time I said 'Come on, let's go to Toys R Us.'"

Tarko's niece Isabella Soto, of North Bellmore, said though she had "gotten too old" for some toys, she was sad the chain was closing.

Tarko and her niece took selfies together both inside and outside the store; a common sight among the wave of customers coming in and out of the store.

Toys R Us, which also owned the Babies R Us chain, was hobbled by $5 billion in debt after a leveraged buyout that left it unable to invest and keep up. As the last of the U.S. stores close, more than 30,000 workers will be looking for work. Toys R Us' troubles have also shaken some big toy makers such as Mattel and Hasbro.

Some shoppers at the Carle Place store Thursday complained that merchandise was scarce, but others said they were not visiting the store in search of bargains but instead wanted to say farewell to the once bustling toy store.

Children lined up to pose for photos in front of a poster of Geoffrey the Giraffe that read, "I'll always be a Toys R Us Kid."

Other customers snapped photos of themselves in front of empty shelves.

"His birthday is coming up so I told him we could come and he could pick out a toy but there's almost nothing left," Lee said. "He's so angry. He doesn't want the stores to close and doesn't understand why" they're closing.

Lee herself said having seen the store fully stocked and "full of life" made it hard for her to imagine what she now saw.

"Just empty shelves. It's so sad," she said. "There is no other store like Toys R Us."

Toys R Us pledged to stay open after filing for bankruptcy, but it had poor sales during the critical holiday season as customers and vendors shied away. In March it said it would liquidate the rest of the 700-plus stores.

At the time, the company had 12 Toys R Us and four Babies R Us locations on Long Island. Some of those have already closed.

It's not clear whether the Toys R Us name and mascot will disappear forever. An auction for the company's name, baby shower registry and various trademarks is set for late July.

The 16-foot tall statue of Geoffrey the Giraffe that greeted visitors at Toys R Us headquarters in Wayne, New Jersey, will be moved to a children's hospital in the state.