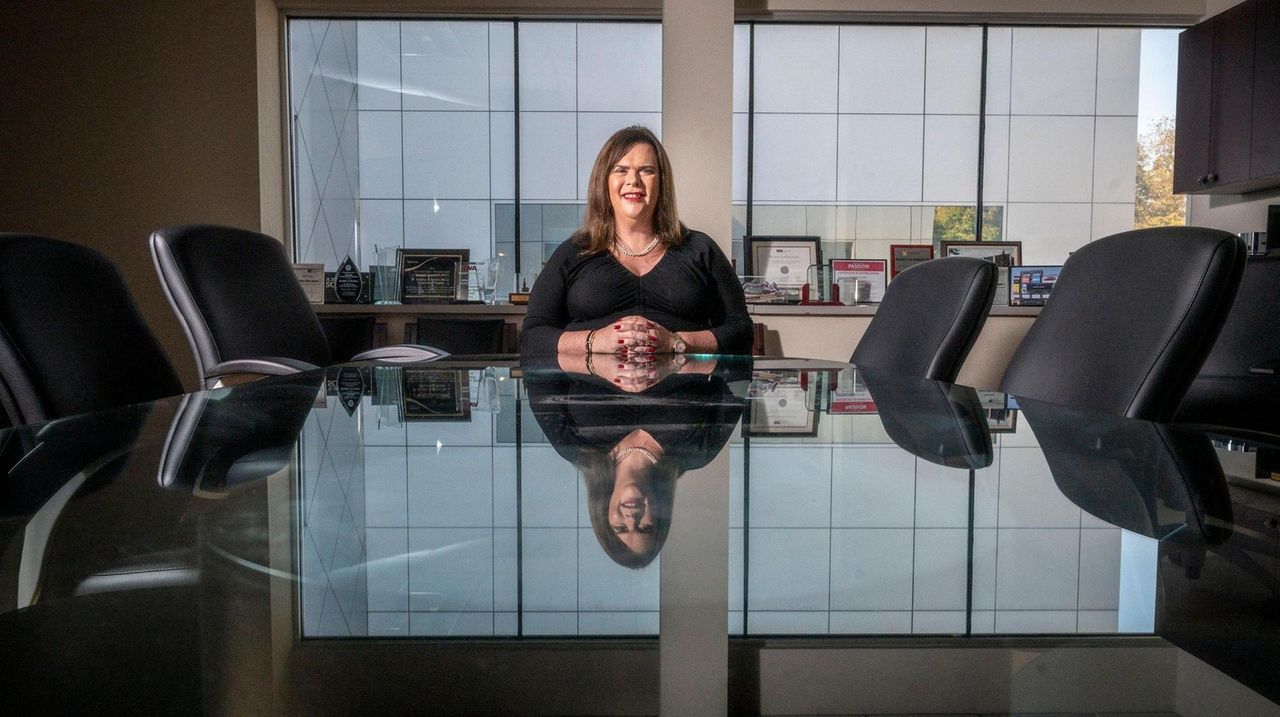 Wynne Nowland of Bradley & Parker transitioned her gender a few months after becoming CEO. She explained to Newsday why she transitioned later in life and how she let her employees know.  Credit: Newsday / Alejandra Villa Loarca

Wearing a baby blue blouse, heels and a pair of Tiffany earrings that had once belonged to her mother, Bradley & Parker chief executive Wynne Nowland pulled her car into the parking lot of the company she had helped build, turned off the engine and took a deep breath.

An hour earlier on that May morning in 2017, Nowland had sent a bombshell of an email to the 70 employees of the Melville-based insurance broker. "I am writing to tell you about a matter that is essentially personal but will result in some changes at work," it began. She then informed her employees that after 56 years of living uncomfortably as a man named Wayne, she had made the decision to transition her gender.

The email explained that her name and gender had been legally changed on her driver’s license, passport and other documents. "I plan to begin working as Wynne starting this morning," she said, adding that she had every intention of continuing to lead the firm where she had worked for 30 years.

Yet, once she pulled into the parking lot, Nowland realized it was one thing to send an email. And quite another to walk into her workplace "looking very different" from the last time her employees had seen her.

"I sat in the car a couple of minutes before I got out," Nowland recalled in an interview in her office. "For me, it was the toughest moment."

An estimated 0.6% of adults in the United States identify as transgender, according to a 2016 study by the Williams Institute, a think tank at UCLA Law School. That translates into 1.3 million adults, more than double the number that had identified as transgender five years earlier.

Many of those transgender adults are coming out on the job, and more are expected to do so in the future, given the recent Supreme Court ruling that the language of the Civil Rights Act of 1964 applies to discrimination based on sexual orientation and gender orientation at work.

Yet only a handful of people have come out as transgender while leading a company, especially a company in an industry like insurance that is often considered staid and traditional. Nowland was entering uncharted territory, as she had to both make her own transition plus guide her board members, employees, vendors and thousands of corporate clients through it.

Through some careful planning, Nowland has been able to do it without negatively impacting her company. Since 2017, Nowland said, Bradley & Parker’s revenues have climbed by 20%. The company is unaware of any clients they have lost because of her transition.

That doesn’t mean there haven’t been plenty of new challenges, surprises and questions, some of them coming from those to whom she was closest.

T.J. McDonough, a board member and the company’s senior vice president, had hired Nowland as an insurance agent in 1983 when they were both working at another company. The two formed a close friendship over the years and have worked together at Bradley & Parker since 1995.

Still, it took more than a few conversations for McDonough to understand what was going on with his friend.

"I was shocked to put it mildly," said McDonough, whom Nowland confided in the week before sending the email. "But that was almost four years ago. I was concerned for the agency Bradley & Parker and how it would affect our relationships with the insurance companies we represent and our clients. I was also very concerned about my friend Wynne. It takes more than a little bravery to make a transition like this when you are in your mid-50s, you know."

Yes it does, but Nowland said she had eventually come to the conclusion that it would be easier to do this than continue to live as a person she was not.

The only child of Irish-Catholic parents she described as conservative, Nowland attended Catholic schools on Long Island and went on to Iona College. From an early age, Nowland said, she felt like she was different. But she couldn’t figure out why. This was the 1960s and 1970s. There was no internet, no transgender celebrities.

"It was another time. You are like left on an island where you know something is wrong, but you can’t put your finger on it or do anything about it," Nowland said. "I just did the best I could to fit in and went along that way a very long time."

Nowland threw herself into her work and distinguished herself early in her career at Bradley & Parker when a cold call to a local Dunkin’ Donuts franchise led to her landing the national account. She also became heavily involved in charity work, eventually becoming the chairman of the board of the Long Island chapter of the American Heart Association in 2016.

Her personal life, however, was complicated.

"I did the typical things that males do. I dated and got married a couple times, and those things didn’t work out," she said. "This was certainly a reason for that."

Nowland said with the advent of the internet, there was a "gradual awakening," and she was able to "identify what was going on." Still, she said she didn’t believe she could do anything about it "without blowing up my life" until 2015 when the very public transition of Caitlyn Jenner brought new public attention to transgender people. Nowland also said she was inspired by the success of a handful of transgender CEOs, including Martine Rothblatt, the founder of Sirius Radio, and Christine Hallquist, the CEO of a Vermont electric company who ran for governor of Vermont in 2016.

By the time she made her decision, Nowland was the COO of Bradley & Parker and was scheduled to take over as CEO in January of 2017. A meticulous planner, Nowland began her private transition and began planning for her public one.

Nowland emphasized that she is aware that her privilege — her position and affluence — made her transition easier. One of the first calls she made was to a lawyer to lay the groundwork for changing her name and other logistics. She then scheduled several surgeries and reached out to a well-known stylist in the corporate and entertainment world.

Nowland came to the conclusion that rather than go through a slow transition that left everyone confused and guessing, she needed "to rip the Band-Aid" off. She targeted the Tuesday after Memorial Day weekend for the first day she would be presenting herself as Wynne to her employees. And then she took two weeks off to make her final preparations.

She sent personal notes to everyone from her favorite butcher to the owners of a handful of restaurants she frequented, explaining her transition so they wouldn't be surprised the next time she visited. She contacted the American Heart Association of Long Island and offered to resign so her story didn’t get in the way of their fundraising efforts. (The board refused her resignation.)

She also put some thought into what she would wear the first day she presented as Wynne at the office.

"I didn't want to wear a dress for about a month or so," she said. "It was just my own judgment that I thought I should ease people into things. For the first day, I picked a business pantsuit, pearls and heels. The earrings were my mom's. I wanted to wear something of hers."

Her biggest concern was what her transition would mean for the firm where she had worked for three decades. She reached out to her board and select executives to inform them of her transition and tell them about the email she planned to send that Tuesday morning. She also reached out to some of the firm’s bigger clients that she personally serviced to make sure they were on board.

Charles Gamarekian, founder and CEO of New Jersey-based paving stone manufacturer Cambridge Pavers, took all of seven minutes to reply to her email. Gamarekian said he had come to rely on Nowland’s business advice over the years, crediting her with his decision to expand during the last recession.

"I felt nothing but joy for Wynne," Gamarekian said. "I wrote her back, ordered the Champagne and sent it. And then it was business as usual." Gamarekian added that it couldn’t have been easy to do what Nowland did. "Evidently, it was a struggle. It might have been for years. I’m just happy that she was able to make that decision and went right out there as CEO of the company."

For the most part, employees were accepting. A handful of women approached human resources concerned about what bathroom Nowland would use; she is 6 foot 1 and some employees worried that she could look over the stalls. That, however, faded as employees just got used to her using the ladies’ room.

There also was one employee whom Nowland said "was kind of nasty" and sent out an email to the rest of the insurance community, including competitors. The board had initially wanted to fire the employee, but Nowland decided to keep him. She said he has since retired.

More recently, there was a negative experience after Nowland went public with her story in the Wall Street Journal and appeared on Fox News’ "Mornings With Maria." Company employees received some hateful emails and anonymous calls, including one to Nowland that suggested she needed to "jump off a bridge."

"There’s still haters out there," Nowland said. "That kind of stuff just makes me want to double down. ... If you say 'I’m going to stop telling my story because I’m going to get hate,' they are going to say mission accomplished."

Nowland thinks it is important to share her experience, both to inspire younger transgender people and to help expand and normalize the public's perception of transgender individuals.

"I want people who are in the same position I was 10, 15, 20 years ago to realize that there is a happy ending here," she said. "I also think it’s important that the general public becomes more accustomed to people in various roles in society. Not every trans person is an actress."

Bruce Kersten, Bradley & Parker’s director of marketing and advertising, said Nowland has dealt with many of the challenges of shepherding her staff through the transition by having an open-door policy. In fact, outside her office is a bakery counter ticket dispenser that he bought her as a gift. Inside, the office is large but homey. Record albums and personal photos decorate the walls, and a plaque, given to her by a staff member, engraved "BOSS LADY" is centered on her desk.

"I’ve never seen her door shut," Kersten said. "If anyone had any questions, as long as someone wasn’t rude, she hasn’t minded sharing."

McDonough, despite his initial concerns, has become one of her biggest supporters. He said not only has he seen the company continue to grow, he feels he has grown from the experience.

"You can have all the preconceived ideas in the world. And then when one of your buddies goes through this, you change," he said. "You have to open up your mind."

"Fast forward to today and those of us who consider ourselves Wynne’s friends think she seems much happier and more at peace with herself than she ever did as Wayne. ... And the agency has done quite well after her transition. We haven’t skipped a beat business-wise."