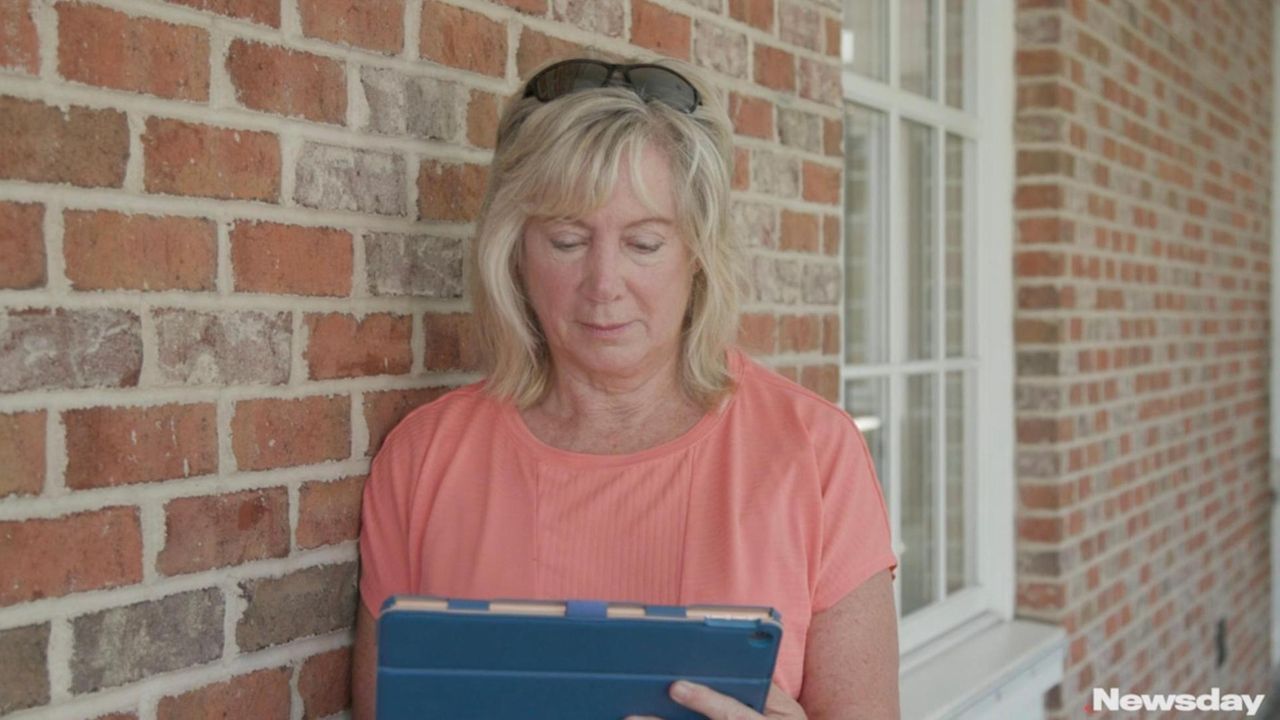 Some business owners on Long Island have gotten creative with how they find an internet connection, after losing service due to Tropical Storm Isaias. On Monday, Barb Herd of Brightwaters told Newsday she sits in the parking lot of her local library to get internet service. Credit: Kendall Rodriguez

As local residents and business owners who lost internet service due to Tropical Storm Isaias scrambled to function without online access, internet service providers said they were working hard to bring back service but could not say when the restoration would be complete.

A spokesman for Altice USA said Monday that fewer than 3% of its Optimum customers in the tristate area still lacked internet service as a result of the storm. The spokesman, Ashwin Bhandari, said, “we are working as quickly as possible to restore service as power is restored by the power companies.”

A Verizon spokesman, David Weissman, said Monday that less than 1% of its Fios customers had been affected by the storm. He said that full restoration of service would depend in part on when customers regain power.

Verizon’s consumer segment provided 6 million broadband connections in the Northeast and mid-Atlantic region last year, according to its most recent annual report.

Altice said in its most recent annual report that last year it provided internet, video and telephone service to 4.9 million homes and businesses in 21 states, including New York.

The state Department of Public Service is including the two companies, which are among “the major wired Internet service providers” on Long Island, in its investigation into outages caused by Isaias, a spokesman, James Denn, said Monday.

Some Long Islanders who still lack internet access resorted to sitting in their cars outside libraries to use spotty Wi-Fi connections while outside temperatures climbed into the 90s.

Barb Herd parked outside the Bay Shore-Brightwaters library Monday, where she could use the building's internet to connect with people for her marketing job. Herd said the internet outage has slowed down her pace of work.

The previous night, she had tried to use her cellular data for a work-related video call but “it just kept disconnecting," said Herd, a Brightwaters resident who lost power for about four hours during the storm and has not had Optimum service since last Tuesday.

Herd said she has tried calling Optimum about eight times, but has not been able to get through. "It's very exasperating,” Herd said. "First you have the pandemic, where you can't go out and be with people, and then you have this thing, where you can't connect with them online either."

Chris Capobianco, 58, who lives with his wife and son in Bay Shore, said the family lost their Verizon internet connection on Tuesday. After power was restored on Saturday, a Verizon representative told Capobianco that the next available service appointment was on Aug. 17. “There’s a lot of damage, I get that,” said Capobianco, co-owner of Yaphank-based Precision Microproducts, which sells and services office equipment. “But don’t you bring on extra crews?”

Weissman, the Verizon spokesman, said on Monday afternoon that Capobianco’s service date had been changed to Tuesday.

Executive recruiter Jack Young, 64, said his Plainview executive recruiting business remained hamstrung by the continued outage of his Altice phone and internet service. “It’s a real problem,” he said. “I have tens of thousands of files stored in the cloud and because there’s no internet service, I can’t get at them."

Ron Troy never lost power, but his internet went down about six hours after the storm swept through his East Northport neighborhood.

Troy, 64, spent hours texting and calling Optimum, which he said has not told him when service may be restored.

He has used cellular data to attend a Zoom meeting for professionals in the financial market data industry, where he is seeking employment.

Without internet service, he said, "you can't do business. You can't live. You have too many people with medical problems to have a system that's this easy to break.”

What to do to when you regain power

Once power has been restored, Optimum services should be back up and running, an Altice spokesman said. Sometimes, you may need to restart your equipment:

• Unplug your equipment from its power source.

• Plug your equipment back in.

If you still lack service, it could be due to damage to the network such as a downed utility pole, a broken wire or loss of the power that feeds the network — which in some cases can come from a different source than the customers’ power, the company said.