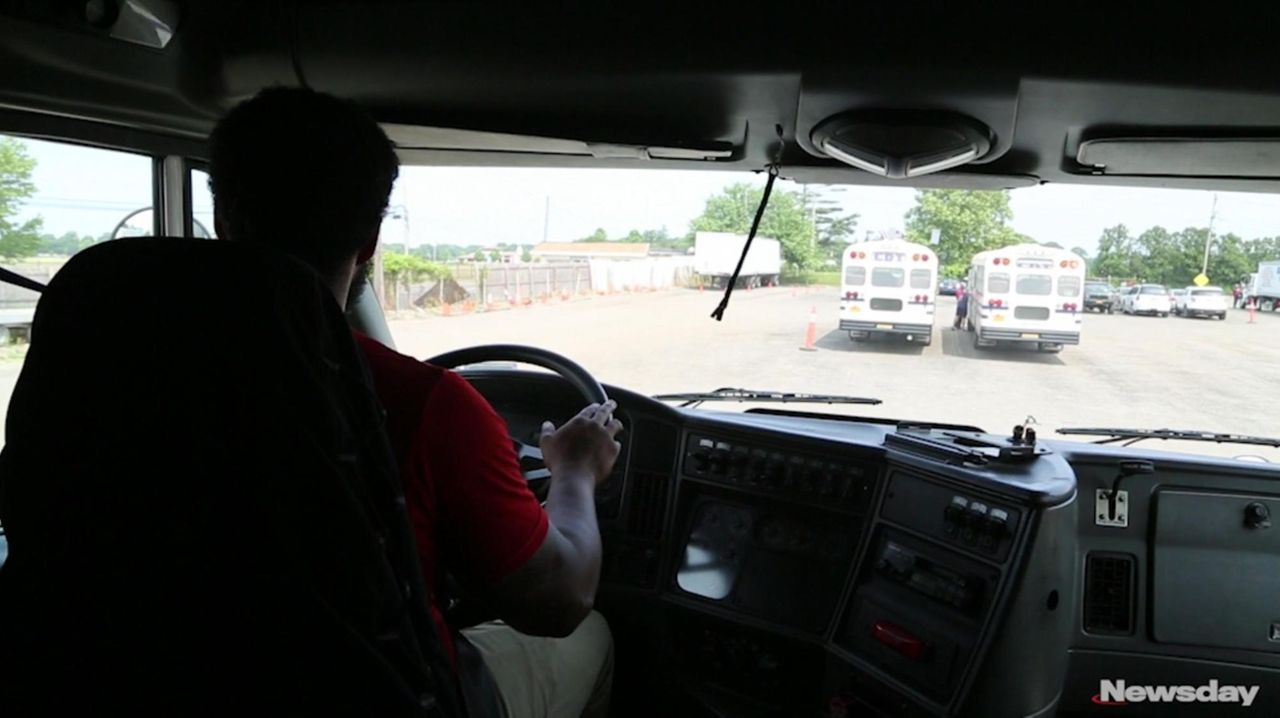 A national shortage of truck drivers because of factors such as a competitive job market is making an impact on Long Island, forcing businesses to adapt, and driving up the pay of workers seeking to drive a big rig.

Long Island companies that depend on trucks to ship their products to stores and warehouses, bring in raw materials for production and other tasks have struggled to contend with the shortage of truckers.

Grocery chain Best Market and gift company 1-800-Flowers.com are among the local businesses that say they have been affected.

Bethpage-based Best Market, whose 29 stores in New York State, New Jersey and Connecticut include 24 on Long Island, has seen an uptick in the last two years of instances when its main grocery wholesaler, C&S Wholesale Grocers, doesn’t have enough drivers to transport products to the grocery chain’s warehouse in Bay Shore during high-volume periods, such as holiday weekends or after storms, said Or Raitses, Best Market’s vice president.

“Our deliveries will come in late or they’ll come the next day, and it could impact our operations in some cases,” he said.

Best Market works to offset this by shifting resources between stores or having employees work later shifts to receive shipments, he said.

Before last fall, 1-800-Flowers.com had been using the spot market, in which shippers use brokers to find freight carriers at competitive rates, to transport products in its food lines, such as Harry & David, The Popcorn Factory and Cheryl’s Cookies, to the Midwest.

That practice changed after the Federal Emergency Management Agency tripled the normal pay rate for truckers to aid in recovery efforts after storms in Houston and Florida last fall. The pay raise reduced the number of truckers available during a busy season for retailers, said Joe Pititto, senior vice president of the Carle Place-based flower and food gift company.

“It most definitely has had an impact on us,” he said, calling it “the perfect storm.”

Now the company has contracts with carriers that won’t be affected by swings in the market. It is also using more rail to transport goods to its facilities earlier, and shipping to cold storage sites sooner, he said.

The cost of shipping freight has gone up 15 percent to 20 percent in the last six months because of the driver shortage, said Tony Nuzio, founder and president of ICC Logistics Service Inc., a Hicksville-based consultancy that helps its companies control their shipping costs.

At this point, the costs are not being passed on to customers in stores, but that is expected to change soon, he said.

Nationally the amount of freight being delivered is growing, and the number of trucking jobs can’t keep up. The U.S. shortage of truck drivers last year hit a record, 50,700, and it is expected to grow to 63,000 this year, according to American Trucking Associations, an Arlington, Virginia-based trade group. Most of the shortage is for drivers of tractor-trailers that can carry more than 33,000 pounds.

The amount of freight originating in New York State alone rose 6.7 percent to 405 million tons between 2012 and 2016, according to the most recent data available from the U.S. Bureau of Transportation Statistics.

Rising pay for truckers is a plus for Corey Anderson, 30, of Central Islip. When he was laid off from his $35,000-a-year warehouse job in March, he set his sights on his long-deferred goal of driving a truck.

He expects to earn a starting salary of at least $70,000 after he completes an eight-week class and earns a commercial driver’s license (CDL).

Driving a truck would offer him more financial stability and the ability to support his family — two sons, ages 3 and 8, and his girlfriend, Anderson said.

“I really wanted to do it. It’s better money. Just to see the road, I guess,” said Anderson, who began taking a class at Commercial Driver Training in West Babylon in June.

Anderson is among six people in the class who plan to earn their CDLs to drive trucks. School enrollment has been shrinking in recent years, following a national trend, said Kim Carsten, director of the 57-year-old driving school.

“I used to have tractor-trailers running around the country, and I just sold all my tractor-trailers because of the shortage of drivers,” said Ousey. His company, which moves safes, ATMs, bank vaults and safe deposit boxes, has seven 18- and 24-foot box trucks but is using only two of them now.

The company also is using common carriers, which take partial loads, such as YRC Freight or FedEx, and using subcontractors in other cities for installations, he said.

Since trucks account for about 70 percent of all goods shipped in the United States, the shortage is creating what some are calling a “drivers’ market,” where companies are offering higher wages and shorter trips to make the jobs more attractive to workers, experts said.

Nestlé Waters, the water division of the Switzerland-based food and drink company Nestlé Group, in Syosset is offering $56,000 to new drivers to start a sales/commission and driving job. For new short-haul drivers the average driver is making $25 an hour, up from $18 last year, Carsten said.

Some companies are offering tuition reimbursement for commercial driving schools — which can cost $4,000 to $12,000 — and shortening the time away from home on trips from 10 to 14 days to seven days, Carsten said.

“They’re trying to make it where they consider regional driving where maybe they are out Monday through Friday and home on the weekends,” she said.

“The Long Island region right now, we have companies walking in the door every day asking us to send them students . . . and I only have so many to send them because the classes are so small,” Carsten said.

Freeport resident Lindalou Uher, 47, who earned her class A commercial driver’s license in March, drives an 18-wheeler all over the Northeast for Nashville-based Western Express, transporting merchandise for Amazon, Walmart, Poland Spring water, Pepsi and other companies.

The job has its challenges, she said.

“Sometimes it’s peaceful and serene . . . and then other times its rough when things don’t work, big trucks break down, get a flat, waiting for someone to come fix it. Other than that, I love it,” she said.

The money has allowed her to have savings for the first time in her life — she makes $1,200 to $1,400 a week — and she’s defying gender stereotypes, she said.

“People shouldn’t judge a book by its cover. Women can drive,” she said.

Some of the trucking industry’s labor woes are simply a result of the low unemployment rate. When there is strong competition from other industries, interest wanes in a job that requires long hours on the road and travel out of state, experts said.

Also, since 2004 federal law has prohibited truckers from driving more than 11 hours a day in a 14-hour period, and they must have a break of at least 10 hours each workday.

A federal electronic logging law, which went into effect in April, now requires drivers to log their driving hours electronically instead of on paper,  making it easier for law enforcement, during inspections, to identify drivers who are not complying with the work-hour limits. So some drivers are taking longer to complete trips — and accept new ones — under the new system.

“From a dollars and cents standpoint, the issue really comes down to that in a non-electronic environment it is easier to fudge or you could say cheat,” said Avery Vise, vice president of trucking research at FTR Transportation Intelligence, a Bloomington, Indiana-based market analysis firm.

The legalization of marijuana also is having an impact on hiring drivers, who must undergo random drug tests, industry experts said.

“We hear anecdotally that the drivers, those in a lot of those Western states in particular, it’s getting harder and harder to get drivers because they’re not passing their drug tests,” Vise said.

The cost of commercial driving school can be prohibitive. But “most reputable motor carriers have a monthly tuition reimbursement program as a benefit for their new drivers,” said Don Lefeve, president and chief executive officer of the Commercial Vehicle Training Association, a trade association group based in Alexandria, Virginia.

Lucero left the Navy in 2004 and since June 2017 has worked various jobs in data entry.

The divorced father of a 7-year-old daughter drives for Uber at night and on weekends while taking the CDL class this summer.

“My vision is to have the financial stability that I once had. Be a good father to my daughter. Be able to provide her with the full benefits and just give her whatever is necessary to be a good father,” he said.

More clients are hiring inexperienced drivers, such as those working in warehouses, to also drive trucks, Tirone said.

“Now they don’t have the experience, so they’re taking a smaller truck that is a lot easier to maneuver,” he said.

In New York State a Class D driver’s license, which is the noncommercial license used to operate a car, can be used to drive a truck with a gross vehicle weight rating of 26,000 pounds, such as a UPS or FedEx truck.

“We have to try to help our customer base stay in business,” he said.