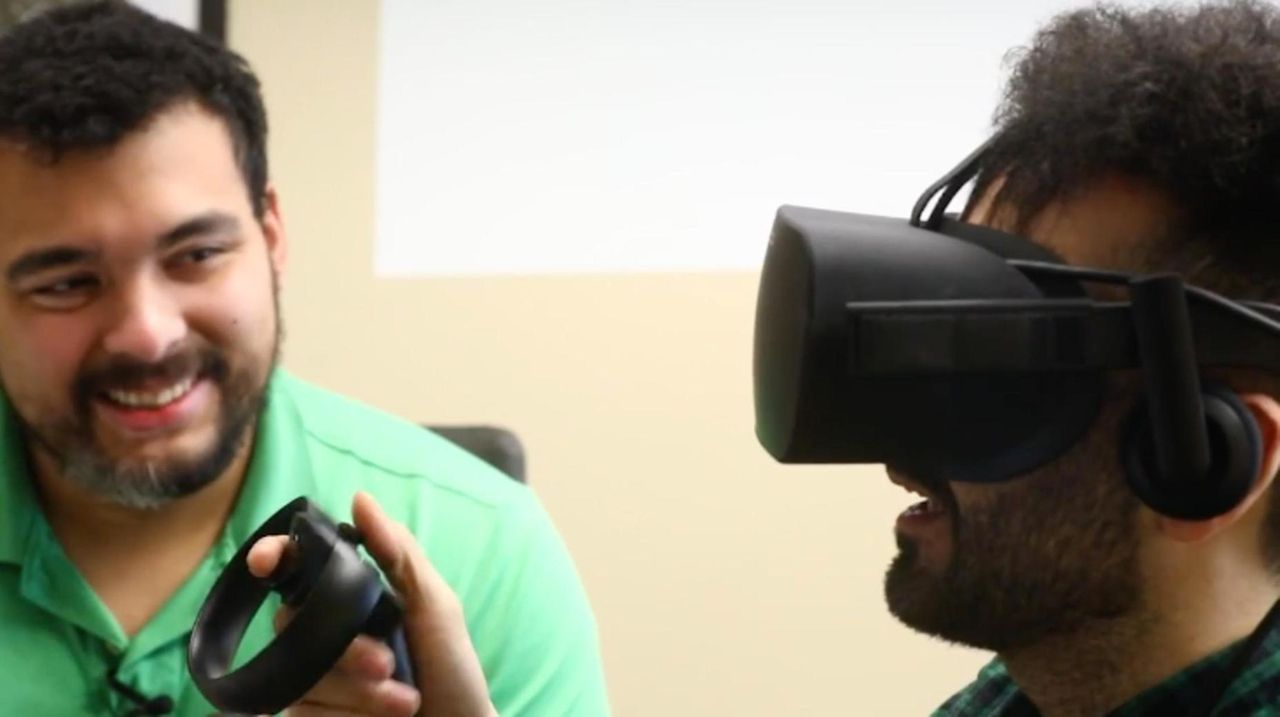 Labrodex Studios in Jericho created a virtual reality game called Scraper: First Strike due out later this year.  Newsday reporter Victor Ocasio got an opportunity to test out the game on March 15. Credit: Newsday / Chris Ware

A Long Island startup is counting down to the release of a virtual reality video game that gives users the feeling that they are inside the digital action.

The launch, by Jericho-based Labrodex Inc., would mark the region’s return as a producer of “studio” video games for the first time since Acclaim Entertainment Inc. filed for bankruptcy in 2004.

Software coders, artists, writers, designers and animators at Labrodex — a closely held company that employs 20 full-time workers, including some as far away as Singapore — are creating Scraper: First Strike. In the combat game, the humans of fictional New Austin take up arms against sentient robots who have their own agenda, which the game eventually reveals. The title is expected to be released in the fall.

Unlike traditional video games, which are viewed on a personal computer monitor or television screen, players of virtual reality games don headsets that block the view of their surroundings. The images they see inside the headset shift as the player moves his or her head, providing an otherworldly experience so realistic that players can freeze with fear when faced with a leap across a virtual abyss.

Ivon and his team work in a building off Exit 41 of the Long Island Expressway. Their mission: transport gamers into a digital world where physical reality melts away — and, in the process, build a real-world franchise.

Video games are big business. A report by the Entertainment Software Association trade group and Port Washington-based NPD Group, a market researcher, found that consumers in the United States alone spent $36 billion on video game hardware and software in 2017, an 18 percent increase over the prior year. That’s just a shade under the $39.9 billion moviegoers worldwide spent in 2017, according to industry tracker comScore.

Virtual reality, however, accounts for just a sliver of the video game pie. U.S. sales of virtual reality hardware accounted for only $400 million in 2017, according to NPD estimates. That’s only 6 percent of all video game hardware sales.

Virtual reality and its sister technology, augmented reality — whose headsets let users see the world around them but overlay computerized images — have been ballyhooed for years. A Time magazine story from 2015 — a year before Labrodex was incorporated — proclaimed: “Why Virtual Reality is About to Change the World.”

Eric Abbruzzese, principal analyst at Oyster Bay-based ABI Research, calls it a “chicken and egg situation,” where the paucity of virtual reality hardware has made the market less attractive to top studios like Activision Blizzard and Electronic Arts. The lack of blockbuster games like Call of Duty and Assassin’s Creed on VR platforms makes gamers less likely to buy costly VR hardware.

But prices on virtual reality hardware are coming down, which is bringing broader usage. Facebook Inc.’s Oculus Rift, the first platform on which Scraper will be launched, charges $399 for a Rift headset and controllers — down from nearly $800 in 2016. And more gamers are taking the plunge.

In 2017, 13.1 million consumers worldwide had virtual reality hardware (excluding headset devices like Google Cardboard that just hold a smartphone in place), an 82 percent increase compared with the prior year, according to International Data Corp., a Framingham, Massachusetts advisory company.

A 2017 study by market researcher The Nielsen Company found that 57 percent of the owners of VR hardware were men and 37 percent were aged 18-34. Potential players are being exposed to the experience through a revival of video arcades specializing in virtual reality. Virtual Realms in Hicksville bills itself as Long Island’s “first virtual reality entertainment facility.”

And a Hollywood movie centered on a virtual world also could push broader use. Director Steven Spielberg’s “Ready Player One,” in which teenager Wade Watts races to unravel the secrets of the real and virtual worlds, was released on Thursday.

The biggest-budget video games can cost more than $200 million to produce, market and distribute.

Ivon said such a budget is out of the question for VR games due to the relatively small size of the VR game market.

“If you spend over $2 million [to develop] a VR game, you’ll have a tougher time recouping your investment until the installed base grows,” Ivon said. “We’re well under that now,” he said of the Scraper project.

To keep costs in check, Ivon runs a lean operation, opting not to buy costly motion-capture suits like those worn by actors to create the computer-generated animation in the “Planet of the Apes” movies. Instead, Ivon’s software wizards patched together a system using cameras scavenged from Microsoft’s discontinued motion-sensing Kinect system for the Xbox. Rough edges are smoothed out by animators.

Ivon said finding top talent is “super competitive,” but the VR project can be a big draw. Some prospective employees “will do anything to work” on Scraper, he said.

Labrodex is a newcomer, but Long Island has a past in digital design and video games that stretches back decades.

In the 1970s the Computer Graphics Lab at Old Westbury-based NYIT was staffed by digital animation pioneers such as Alvy Ray Smith and Ed Catmull. Those two eventually built Pixar, whose pioneering animations sent Buzz Lightyear “to infinity . . . and beyond” in “Toy Story.”

Glen Cove-based Acclaim Entertainment Inc. grew into one of the nation’s largest video game developers, with revenue that hit $566.7 million in fiscal 1995 on the strength of games such as NBA Jam and Mortal Kombat. The company, which featured extreme violence and nudity in some games, came under fire from some social critics. It ultimately fell victim to a drought of hit titles and liquidated in Chapter 7 bankruptcy in 2004.

At least one other Long Island company is working on a video game. A newly formed virtual reality unit of Farmingdale-based Cemtrex Inc., a provider of electronics manufacturing services and environmental control equipment, is working on the first “chapter” of “Ultra 85,” a game featuring sword combat. The beta release of an abbreviated free version is expected in May or June. The company plans to extend the storyline and produce a polished, paid product in future iterations, said Ashwin Gobindram, chief design officer and director of operations for recently formed CemtrexLabs and CemtrexVR. Cemtrex also is working on augmented-reality software that could be used to aid industrial workers.

Labrodex and Cemtrex hope to parlay their VR game expertise into services that can be sold to business clients.

Labrodex already has created an augmented-reality app, sold in the Android and Apple iOS app stores, that lets users play with a virtual dog companion, Dex.

Ivon hopes Scraper will become a series of games. To that end, he hired Ryder Windham, a prolific author of dozens of novels based on the enduring “Star Wars” and “Indiana Jones” franchises, to write a book, “Scraper: The Rise of Cifer,” which went on sale March 1. The book is a prequel to the video game. Windham fleshed out a basic plotline created by Ivon, with the goal of creating the potential for sequels and prequels and related VR games.

Ivon also hired Winifred Phillips to compose Scraper’s music. Phillips, whose credits include scores for hit video games like Assassin’s Creed, The Sims and God of War, said Ivon’s vision for a broader story cycle could pay off.

“There’s something very smart in the way that Jim is building this,” she said. “He’s thinking of it as an intellectual property with a future.”

As for now, she said, virtual reality remains a world that has yet to be fully explored.