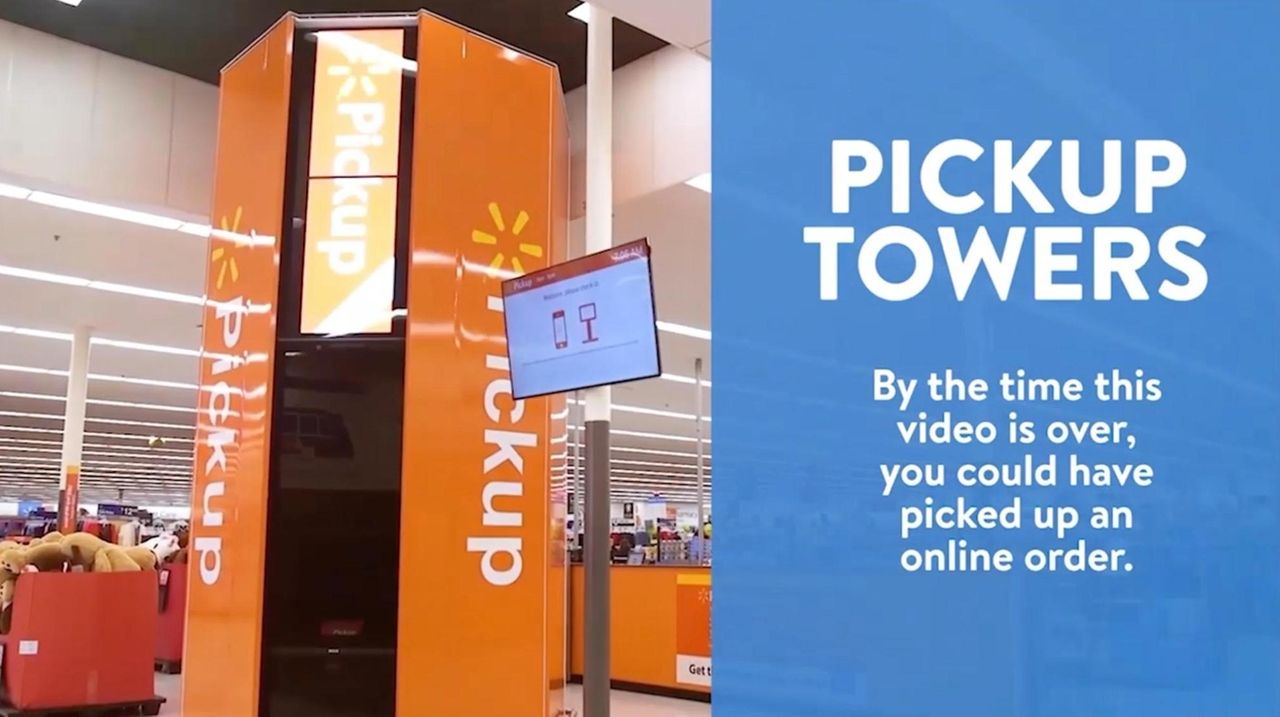 Walmart, the world’s largest retailer, is rolling out 500 more of its automated pickup towers, described as “high-tech vending machines,” to stores across the country this year. The locations will include two in the fall at its Valley Stream and Islandia stores, which are being renovated. Credit: Walmart

One of Walmart’s weapons in its stepped-up fight against Amazon.com is coming to Long Island, as the discount retailer makes more of a grab for smartphone shoppers.

Walmart, the world’s largest retailer, is rolling out 500 more of its automated pickup towers, described as “high-tech vending machines,” to stores across the country this year, including locations in Valley Stream and Islandia. The Long Island stores, which will receive the towers this fall, are among 15 in New York state being renovated this year.

The additions will bring the number of pickup towers inside Walmart’s stores to 700 by the end of the year.

“It’s one of the long list of innovations that we’re expanding in stores or testing in stores to try to save customers time,” said Phil Keene, spokesman for Bentonville, Arkansas-based Walmart Stores Inc.

The 16-foot towers will be used by customers who opt to have items they purchase from Walmart.com delivered to stores. Customers can retrieve their purchases at the towers by scanning the bar codes sent to their smartphones.

The towers then will slide the purchases out on trays to customers, who don’t have to interact with store employees. The entire process should take less than a minute, Walmart said.

While the chain offers free two-day shipping to customers' homes with a minumum purchase, shipping to stores is always free and many items can be picked up the same day.

But convenience isn’t everything, one Long Island retailer said.

“I think the whole idea is atrocious,” said Carlow, chief financial officer and former co-owner of Trio Hardware, a 55-year-old business in Plainview that offers online buying and has orders shipped to the store twice a week for customer pickup.

But stores are exploring different delivery methods in a scramble to compete with online retailers, and especially with Amazon’s growing delivery options.

The biggest online retailer, Amazon has pickup lockers and same-day delivery in select markets for a fee. The Seattle-based company also recently announced that it will start delivering purchases to customers’ cars without requiring them to be in their vehicles.

Walmart’s towers are another option in “buy online, pick up in store,” or BOPUS, a big factor in expanding customer convenience, said Bill Dreher, research analyst at Susquehanna Financial Group in Manhattan.

“The pickup towers are an attempt to get customers into the store and offer them the convenience of BOPUS with the same price,” Dreher said.

Retail services tied to smartphones are going to become more crucial to competition, he said.

During the same period, visits from desktop computers fell from 67.2 percent to 47 percent.

And though the internet accounts for only 15 percent of retail sales, it’s still big money — an estimated $500 billion in sales, said Charlie O’Shea, retail analyst with Moody’s.

For independent brick-and-mortar stores trying to remain relevant, some customer amenities, like 16-foot automated towers, might remain out of their reach.

Walmart declined to say how much it pays for the towers, which are made by Cleveron, a technology company in Estonia, in northern Europe.

However, the towers’ exclusive distributor in North America, Bell and Howell, a Durham, North Carolina-based company, prices them at $100,000 to $130,000 each, depending on volume and configuration, spokesman Brian Irish said.

Aside from the two stores on Long Island, four other Walmart stores in New York state will get pickup towers this year and four locations already have them, the company said.