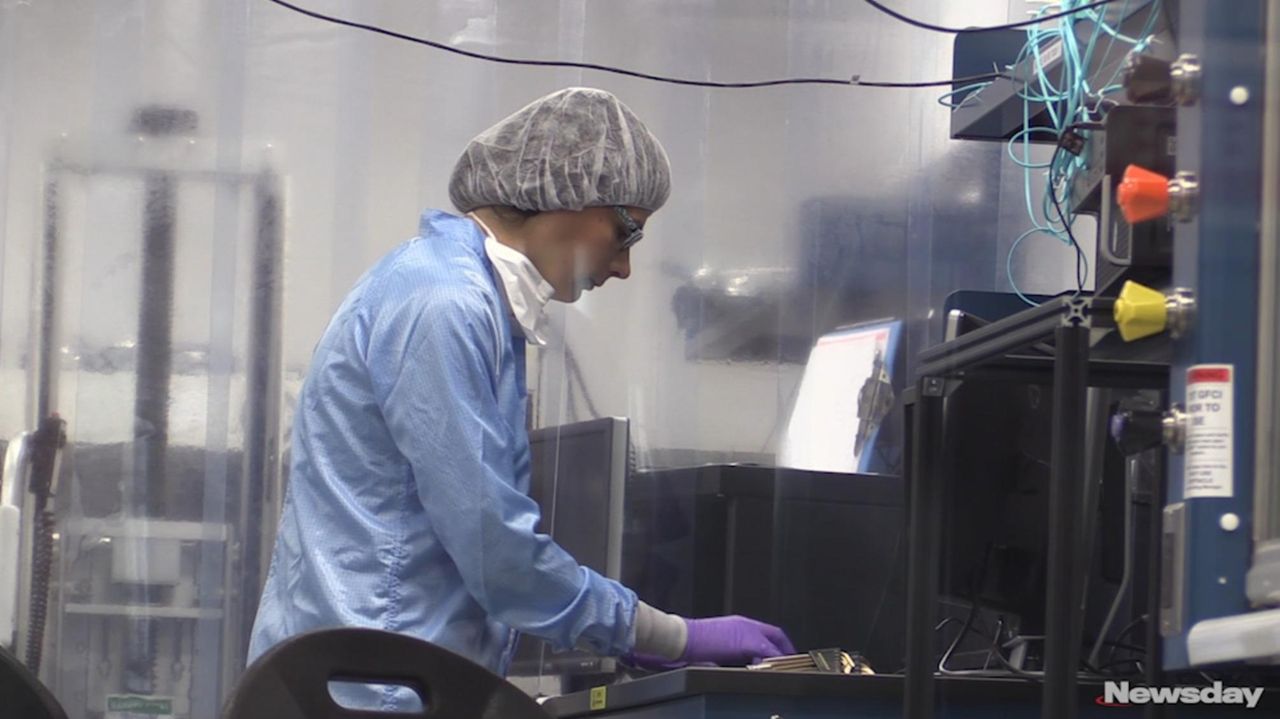 On Friday Oct. 6 2017, the Women in Manufacturing/STEM Summit at Suffolk County Community College was held as part of a local celebration of National Manufacturing Day. It is designed to encourage young women to pursue careers in the areas of Science, Technology, Engineering and Mathematics. The nonprofit Workforce Development Institute showed a 12-minute video it produced, featuring some of the panelists, highlighting women in manufacturing. Credit: Workforce Development Institute

Women can build fulfilling careers at local factories because of the wide range of available jobs, many of them requiring technical skills.

That was the message recently from a panel of female executives, who said they found success in manufacturing despite the sector’s reputation for being a “man’s world.”

The women are involved in producing everything from wine and shampoo to skin creams and a high-technology microscope.

“We have all kinds of jobs: human resources, finance, customer service, sales, research and development, quality control, engineering, technicians,” said Evelyn Marchany, head of drugmaker Novartis/Fougera Pharmaceuticals Inc.’s two local plants, which together employ about 350 people in the production of skin creams, lotions and ointments. “There are a lot of job opportunities in manufacturing.”

Marchany was among nine speakers on the panel held this month at Suffolk County Community College. Many also are featured in a new 12-minute video produced by the Workforce Development Institute, a nonprofit group based in Albany, to encourage women to pursue careers in manufacturing.

Marchany said women shouldn’t hesitate to speak up in meetings even if most of the people in the room are men.

“Persistence and believing in yourself; you have to be confident,” she said. “You also need to aspire to be the best in everything you do.”

Winemaker Alie Shaper agreed, saying, “Don’t do yourself differently. Be who it is you want to see in that workplace . . . Go forth with a behavior that says, ‘I belong here.’ ”

Shaper, who started the wine company Brooklyn Oenology, known as BOE, and the Peconic Cellar Door tasting room in Peconic, said there are job openings at local plants at many levels.

She has an engineering degree but said effective manufacturing executives value equally work done in an office, on the factory floor and in a warehouse. She makes her As If label wines on Long Island’s North Fork.

“If you want to understand manufacturing, you have to do it yourself; you have to try all of the jobs,” she said.

Plants in Nassau and Suffolk counties were looking to fill 8,372 jobs between August 2016 and July, according to the workforce institute. The most openings were for forklift operator, sales associate, quality assurance manager, mechanical engineer and software development manager.

Women make up about 35 percent of local manufacturing payrolls, which averaged 86,800 between 2011 and 2015, according to Census Bureau estimates.

“Don’t listen to anyone who tells you manufacturing is dead; it is far from that,” said Rosalie Drago, the institute’s Long Island director.

She and others said the sector offers employment to people with and without college degrees.

Success comes to those willing to work hard, said Doreen Guarneri, a hairdresser who started her first business after high school with her husband, Louis. “We never said, ‘that’s beneath me,’ ” she said.

The couple now runs American Culture Brands, a manufacturer of shampoo, conditioner and other hair care products in Huntington Station. The products have won favor with celebrities such as singer Jewel and actors Mark Wahlberg and Will Ferrell.

“What happens at a manufacturing company if you step in and just say at a very young age, ‘I’m looking for work’? Oh, hold on for the ride because there is anything and everything that you could possibly do at that place of business,” Guarneri told the SCCC audience of about 160, which included high school students from Central Islip.

The event and video release were part of local celebrations of National Manufacturing Day, which was Oct. 6.

Several speakers said the best way to pursue a career is to do an internship or secure an entry-level position.

“Take a job; take an internship,” Farmingdale State College professor Marjaneh Issapour said. “Find out what your passion is. Manufacturing has room for everyone.”

Felicia Fleitman, owner of the human resources firm Savvy Hires in Westbury, agreed, saying young women should start by researching local companies to identify a handful that interest them. They then should contact the companies to arrange an in-person interview to learn more.

“When you go in for that internship . . . Don’t show up and say, ‘Teach me,’ ” said Fleitman, co-founder of the nonprofit RecruitLI.org.“Think about what you want to get from the internship and what you are giving to the business. When you walk out, you want them to say, ‘Wow, that was the best intern that we’ve ever had and we want to hire her.’ ”

Long Island factories had 8,372 job openings between August 2016 and July. Here are the most in-demand positions:

About 35 percent of manufacturing employees on Long Island are female.