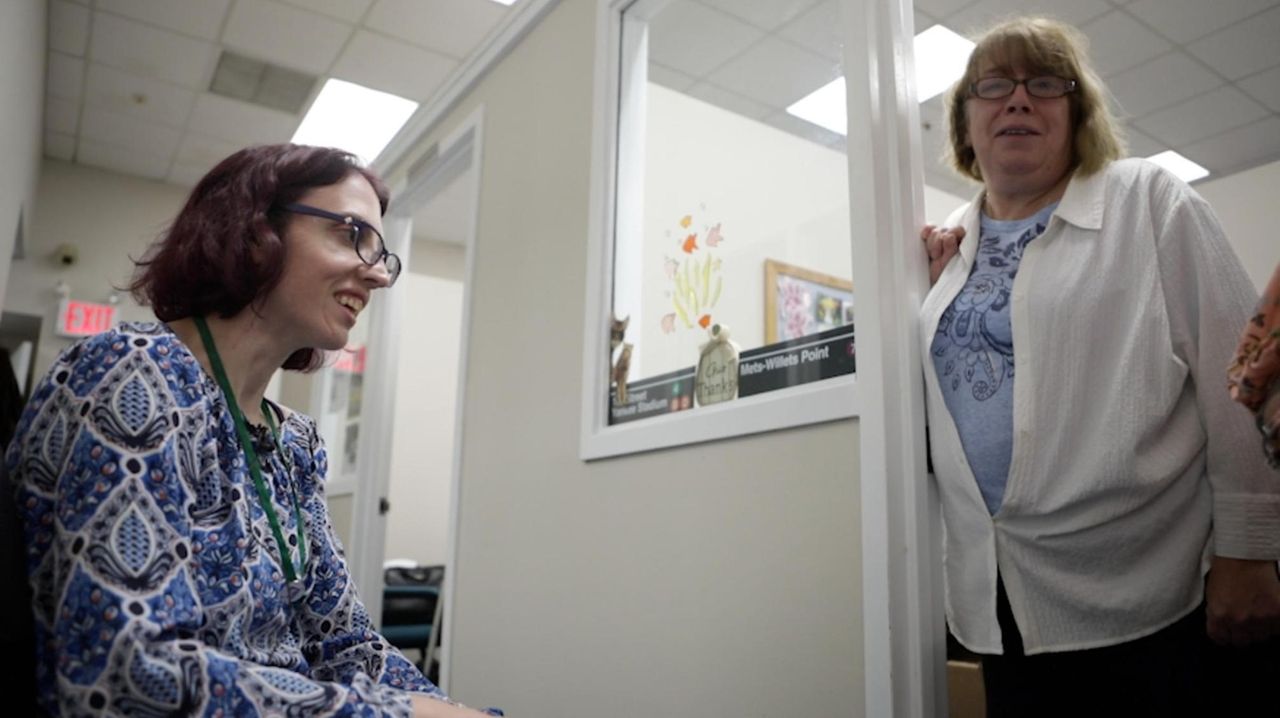 Heidi Hacsi works at the Albertson-based Viscardi Center, a network of nonprofits that provides services to children and adults with disabilities.  Credit: Newsday / Shelby Knowles

Job opportunities for LIers with disabilities have improved only marginally, despite economic conditions that have rebounded since the recession of 2008-2009 and near record low unemployment rates, advocates say.

“Although there’s been a significant economic expansion and unemployment is the lowest it’s been in decades in New York State, that hasn’t translated into opportunities for those with disabilities that one would expect,” said Maureen O’Brien, president and chief executive of New York State Industries for the Disabled (NYSID), a nonprofit representing more than 100 companies and organizations that employ mostly workers with disabilities and contract their services to government agencies.

Unemployment rates have remained far higher for job seekers with disabilities than their counterparts without disabilities.

On the Island in 2017, the latest year for which such data are available, people with disabilities had an unemployment rate of 10%, nearly three times the 3.5% rate for the general population, according to the state Labor Department. The unemployment rate was even higher — 16.3% — for individuals with cognitive disabilities.

Nine percent of Long Island residents ages 18 to 64 — 115,655 people — had a disability in 2017, according to Census figures compiled by the state comptroller’s office. About 40,500 people with disabilities were employed, while more than 4,500 were counted as unemployed.

Overall, New Yorkers with disabilities are 2.6 times more likely to live in poverty than residents without disabilities, according to NYSID. Only two other states, Kentucky and Maine, have a larger disparity between the poverty rates of their disabled and nondisabled populations, the group said.

“Individuals with disabilities are still striving for that level of equality that’s on a piece of paper to be a reality,” O’Brien said. “Simply because you’re disabled shouldn’t preclude you from being fully integrated within a workplace.”

One key factor: unwarranted snap judgments and stereotypes about potential employees’ abilities to meet tasks, said John D. Kemp, president and chief executive of the Albertson-based Viscardi Center, a network of nonprofits that provides services to children and adults with disabilities.

“They start making prejudgments for you or about you,” said Kemp, whose organization provides skills assessments and job placement services.

Kemp, who was born without arms and legs and uses prosthetic limbs, said employers often come to the interview table with a sense of unease, worried they might one day have to fire an employee with a disability, and would rather avoid the situation altogether.

Additionally, concerns that workers with disabilities will drive up health care costs or increase workers comp claims can subtly bias an employer against giving applicants a fair shake. Kemp said evaluating job seekers with disabilities can require a greater degree of consideration, but “that doesn’t mean there aren’t arbitrary decisions being made.”

“There’s got to be a major shift in some way in the thinking about individuals with disabilities,” he said.

One of those shifts is understanding the bottom line value that employees can bring to an organization and the economy at large.

Instead, some employers see job offers to candidates with disabilities as a form of “charity,” said Donte Blades, assistant director of vocational services at the Developmental Disabilities Institute (DDI), a Smithtown-based nonprofit.

“Some people just really want to help, and that can turn accidentally into a charity job,” Blades said. “And then they’re in over their head, saying, ‘I don’t have enough work for them to do, but I don’t want to let them go.’ ”

Ultimately, Blades said, hiring individuals with disabilities is just like hiring any other employee, and doing so should be done with the same motive of increasing productivity and profitability.

Many employers are getting better at understanding the assets employees with disabilities bring to the table, he said.

“We would go to places and they would say ‘I hired one of those kind of guys before and it didn’t work out,’” he said. Now, “the more our guys are being integrated into the community, I think we’re hearing less of that. That stigma is changing a little bit.”

Ian Balter, 34, who works four hours each Monday at Trader Joe’s in Lake Grove arranging products in the store, doing maintenance work and helping customers find items, wants nothing more than to secure more hours on the job.

Balter, who has autism, Tourette’s and dyslexia, landed the job through vocational training and placement services at DDI.

His co-workers and management are “extremely supportive,” he said, but Balter is still working to overcome some of his personal challenges, such as stuttering, controlling the volume of his voice and the occasional broken jar due to his “clumsiness.”

“It’s definitely a challenge for me, and I wish it wasn’t,” he said. “It’s just frustrating and I want it done right, so every time something falls, it’s frustrating.”

Balter, who also serves as president of DDI’s self-advocacy group, said that while his personal skills are more of a challenge for him than employer bias, society at large is not as educated on the issues facing people with disabilities as it should be.

“They should be aware,” he said. “I think we should be heard and less ignored. People with disabilities can do the same things normal people can do.”

To ensure that workers with disabilities achieve greater job security, employers should focus on an applicant’s strengths and be open to providing a supportive work environment, advocates said.

For more than a decade, Josh Berman, 48, who has Asperger’s syndrome, has been a mainstay at the IRS office in Bethpage. Berman, who works five hours a day, five days a week in the federal agency’s mailroom, bursts with enthusiasm when talking about his job.

“I love working my job,” said Berman, who lives in Oceanside. “I feel very independent when I do my job and I have a lot of confidence as well.”

While Berman reports to the IRS facility each day, he is an employee of The Corporate Source, a private nonprofit in Garden City that hires people with disabilities to work on contracts for other companies and government agencies, providing ancillary business services. As a result of the arrangement, Berman has the supervisory support of a trained Corporate Source staff member on the job.

Berman said not all of his past employers have been as supportive as The Corporate Source.

“I’ve had plenty of other jobs before, but this one is the best,” he said. Berman said his goal is to “keep on working at The Corporate Source until it really is time for me to retire.”

Jeanie Shelton, assistant director of vocational services at Adults and Children with Learning Disabilities, a Bethpage-based nonprofit, said lack of computer skills sometimes holds back individuals with disabilities, as does lack of transportation.

Services such as Able-Ride in Nassau County, or Suffolk County Accessible Transportation (SCAT), provide pickup and drop-off services for residents with disabilities.

Many in the community of people with disabilities say the services, while great to have, run during limited hours and don’t arrive at the same time each day, resulting in some riders arriving hours late, or early, to work.

For nearly four years, Hacsi, 37, has been assisting people with disabilities by evaluating their skill sets and helping them find employment as an evaluation assistant at the Viscardi Center.

Hacsi not only hears about how tough job hunts can be from her clients, she’s gone through the struggle herself.

“I kind of feel like I have two things against me in the sense that I’m an educated woman that happens to have a disability,” said Hacsi.

Throughout her time at Molloy College and after graduation, Hacsi said, she would go to many interviews where employers seemed receptive on the phone or through email communication, but the tone would change when she arrived in person or would call ahead to ask about wheelchair accessibility.

One interviewer greeted her with, “ ‘Oh ... you’re Heidi,’ “ she said. “I knew exactly what direction that was going in. I have gone on numerous interviews that have lasted five seconds.”

Interviewers’ subtle and not-so-subtle reactions come from a place of ignorance when it comes to interacting with people with disabilities, Hacsi said.

While disabilities often come with societal stigmas, some disabilities can be invisible. Bryant Pendergrass, 53, prefers it that way.

Pendergrass, a Corporate Source employee, has worked part-time at Harold Levinson Associates, a convenience store distributor in Farmingdale, for two years, but said he hasn’t told anyone he works with of the peripheral vascular disease that causes him pain when walking.

“I feel a little embarrassed to tell people,” he said. “People look at you a certain way when you say you’re disabled. I figure it’s best to keep it to myself.”

Keeping a disability a secret is all too common, said Michael Kramer, chief executive of The Corporate Source.

“People don’t like to disclose their disability in the workplace because they think they will be ostracized, they won’t be treated the same way, or it will eliminate future opportunities for them.”

While discrimination based on an individual’s disability is illegal, it happens every day, Kramer said. When that discrimination carries over into hiring or management practices, he said, the negative impacts are profound.

“Work is more than just a paycheck,” Kramer said. “It’s an opportunity for people with disabilities to demonstrate ... that they are as good as anybody else. When you take that opportunity away, you demean them.”

One organization dedicated to giving workers with disabilities the opportunity to demonstrate their skills is Spectrum Designs.

The Port Washington nonprofit was founded in 2011 to create jobs for Long Island residents on the autism spectrum.

Its 43 employees — 23 of whom have disabilities — produce custom screen-printed apparel and accessories at its 8,000-square-foot headquarters.

CEO Patrick Bardsley said Spectrum has taken steps to ensure its workplace meets the needs of its employees, including colorful labeling of machinery and simplification of otherwise excessive instructions.

“There’s a lot of complicated things you can do to be more inclusive, but a lot of it is very simple,” he said. “A lot of it is just training people.”

While the screen printer has been in expansion mode since 2013, racking up big-name customers including Google and Uber early on, there were concerns about how the business would be received by customers.

“One of the challenges [we] faced in the early days is the preconceived misconception of what our guys can do,” Bardsley said. Now on track to reach $3 million in sales this year, he said that misconception has been proven wrong.

Vocational Services at The Corporate Source

Vocational Services at The Viscardi Center