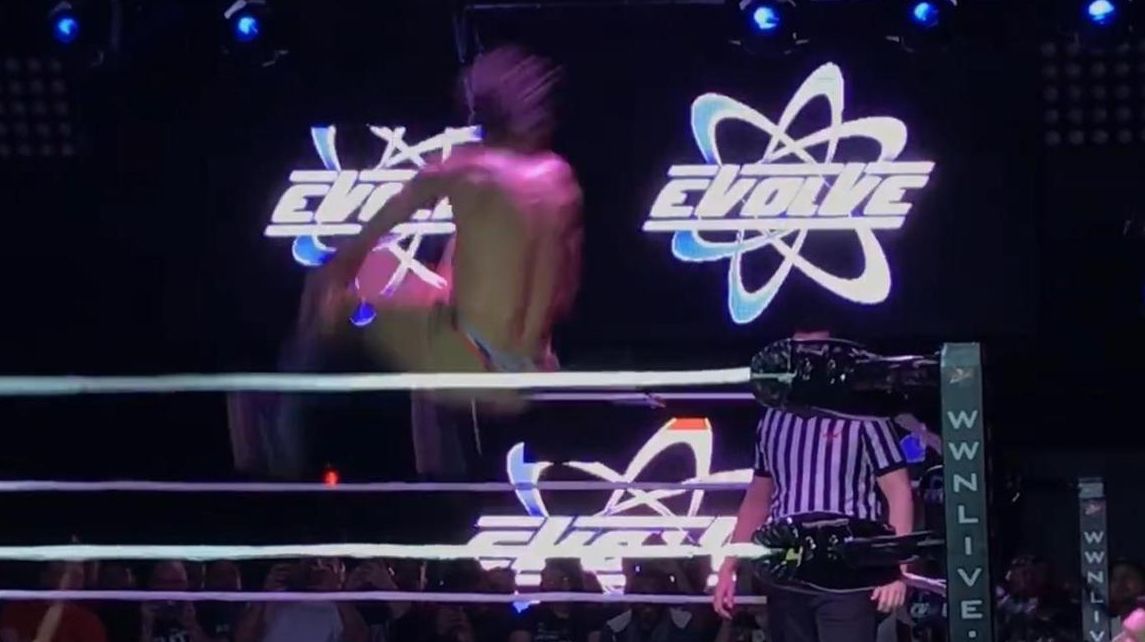 Independent pro wrestler Alex Reynolds, of Patchogue, discussed his match at the Evolve 125 in Woodside on Friday— one of several pro wrestling events happening in the area as part of WWE's WrestleMania.  Credit: Newsday / Alfonso Castillo

WrestleMania — pro wrestling’s annual version of the Super Bowl —  is making its return to the metropolitan area this week, bringing with it an “economic windfall” for the region and a unique opportunity for aspiring local wrestlers to get noticed.

More than 120,000 wrestling fans from all 50 states and more than 40 countries are expected to converge for WWE’s WrestleMania 35, which will take place at New Jersey’s MetLife Stadium on Sunday and feature such stars as "Rowdy" Ronda Rousey, Brock Lesnar and Kofi Kingston. This year’s festivities will include four live events at Brooklyn’s Barclays Center, and  five days  of the WWE’s annual “Fan Axxess” convention,  starting Thursday,  at Pier 12 of the Brooklyn Cruise Terminal.

But some of the biggest attractions of WrestleMania are not put on by WWE, but rather by independent wrestling promoters looking to take advantage of the annual gathering of wrestling fans from around the world.

Dozens of events are planned in the area, including a live podcast Thursday night at Hicksville’s Create a Pro Wrestling school hosted by WWE stars Curt Hawkins and Zack Ryder — both native Long Islanders.

Alex Reynolds of Patchogue, a trainer at the school who has been wrestling for independent promoters for a dozen years, plans to wrestle on at least three different shows,  starting with Thursday’s Evolve Wrestling event at the La Boom nightclub in Woodside, Queens.

“You’re going to get a lot of awareness of yourself out there, which is a plus and builds your name among the fan base,” said Reynolds, 32, who noted that wrestling promoters from as far away as England, Germany and Japan will all be in the area this week. “I feel like it’s one of the biggest networking weekends there is.”

As evidence of the career-making potential of WrestleMania events , Reynolds pointed to his longtime friend Tony Nese, of Ridge, who wrestled on four shows in three days when WrestleMania was last in town six years ago.

“That was kind of my breakout moment, when my name started to be noticed outside of the Northeast area,” Nese said.

The notoriety Nese gained that weekend eventually led him to try out for, and be hired by, WWE. On Sunday Nese will challenge for the WWE cruiserweight championship in front of more than 70,000 expected fans at WrestleMania 35.

The last WrestleMania to be held at MetLife Stadium, 2013’s WrestleMania 29, generated $101.2 million for the region, the WWE estimated. Last year’s WrestleMania created an estimated $175 million in new spending for its host city, New Orleans, contributing to Forbes' listing the event among its top 10 most valuable sporting event brands in the world.

The event has become such an “economic windfall” that cities engage in annual bidding wars for WrestleMania, said John Saboor, WWE’s executive vice president of special events, who noted that the company is already negotiating with potential hosts for WrestleMania through 2025.

Fans “have embraced every part of the weeklong celebration. They have also put great weight in experiencing all that our host region . . . has to offer,” said Saboor, who expects that support to be particularly strong as WWE holds the event in its longtime base market. The New York region has hosted multiple WrestleMania events over the last 34 years, including at the Nassau Coliseum in 1986.