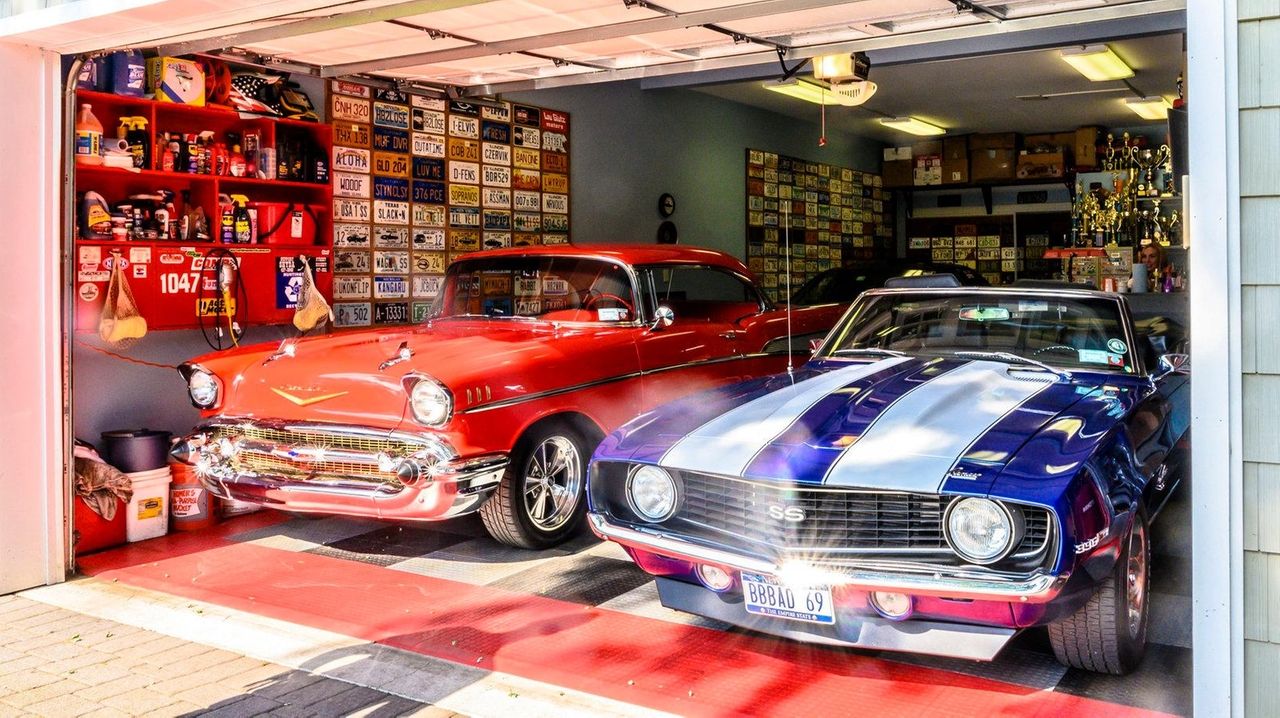 Bill DeBlasio of Huntington Station is just one of many Long Islanders who have invested time and money into one, unexpected part of the house: the garage.  Credit: Newsday / Alejandra Villa Loarca

For Long Islanders, a garage can be many different things — a place to park a car, store the lawn mower, hide away junk. And it can be a hangout spot, an art gallery . . . even a happy place.

When he expanded his Huntington Station home in 2005, Bill DeBlasio upgraded his single-car garage to fit four cars, two in the front and two in the back, he says. It took 10 years for him to then soup it up, starting with covering the 800 square feet of flooring with Racedeck gray and black checkerboard tiles. Not only does it look good, but the floor is very durable, says DeBlasio, 53, who works in cyber security. “It’s waterproof, oil-proof," he says. "You can spill anything on there and it wipes right off.“

In the back of the garage is an area where DeBlasio does auto detailing, thoroughly cleaning his cars from top to bottom with an assortment of waxes, polishes and sprays he stores in the area. This also is where he keeps his 1995 black Chevy Impala SS, which he races around the country. In the front are two older cars, a '69 blue Chevy Camaro SS 396 convertible, which he has had since high school, and a red '57 Chevy Bel Air.

DeBlasio has been collecting license plates since he found one serving as third base while playing baseball as a young boy. Others he has gotten through license plate trading pages on Facebook and other online sources. He now has about 500 of them. “Once people found out that I had a license plate collection, people started giving them to me,” many of them racing enthusiasts he meets, says DeBlasio. About half collection now hangs on two garage walls from 4-by-8-foot plywood boards. “That way if I ever move or if I ever want to take them down, there’s not millions of holes in my brand-new walls in the garage," he says.

In the space where a fourth car might go — he parks the car that he regularly drives outside — DeBlasio keeps a refrigerator stocked with beer, soda and other cold drinks for him and his pals as well as a 42-inch TV that swivels and stools. “We call it Garage Mahal," he says.

Cynthia Raven says she always wanted a classic truck and knew that it would rust like her previous truck did if she kept it outside in the winter. Since her Levittown home didn’t come with a garage, Raven, 55, had one built with two garage doors so that she could potentially, if she needed to, park a third car behind the garage.

Now, her garage houses her 1957 black Chevy pickup 3500 stepside truck, which she brings to car shows. She also has an everyday Ford truck that braves the elements outside.

“Once I got into pickup trucks, I just kind of liked them," says Raven, an executive assistant for an investment banking firm who bought her ‘57 Chevy from someone who kept it, for the most part, garaged in California. “So it’s never been in the snow. It’s hardly ever been in the rain. I was like, ‘I’m never going to get another that’s in as good shape as this one.’ ”

Raven’s garage is also a repository for her memorabilia and artwork, which includes framed photos she took at Las Vegas car shows, posters from car shows, framed magazine covers, signed posters of motorcycles, a poster of her friend on a motorcycle and Alberto Vargas-inspired pinup girl prints.

“A lot of times I’ll get stuff for my house. I’m big into having different artwork,” she says, noting that every few years, she updates her collection, so posters from car shows and other artifacts are now decorating the garage.

"It is a place where I could have all the stuff I've collected for 15 or 20 years related to cars and motorcycles," Raven says. "I'll go out there and hang out with my dog. It's a good hangout spot."

Soon after Raj Bhasin bought his Oakdale home last year, he knew he wanted to fix up the garage, he says. So he contacted Symmetry Closets, a Holbrook-based custom closet and storage company. “He really wanted it to look great,” says owner Bonnie Reich. “He was having a big birthday party, a lot of guests from out of town and he wanted a really nice space that would impress people, look great and serve him beyond that.”

Before her company got to work, items were placed randomly throughout the garage, says Reich. “There was no system there, so it just became a big pileup mess,” Reich says, adding, “He wanted to be able to bring his car in there, store his motorcycle and enjoy it. And it also doubles as a man cave.”

Fixing up the two-car garage was the first project in his new home, says Bhasin, 50, who owns a nutrition distribution business.

“I just didn’t like the way it looked every time I used to enter the garage, so I said, ‘Let me fix it.’ ”

Bhasin hired Creative Flooring Finishes of Stony Brook to transform the floors, which were originally concrete, to its current blue and black epoxy.

Now he parks his car in the garage, a supercharged 2014 white and black Range Rover, as well as his 2016 1802 cc Harley Davidson Fatboy Screaming Eagle motorcycle.

“I’m on the water, so I hang out in the garage when it’s raining or in the evening when we have barbecues, and guys smoke cigars and have some wine,” says Bhasin, whose home is on Great River.

Now that his garage is fixed up, Bhasin says he can’t imagine not having it.

“I just want to be happy. That’s why I bought this house. Water makes me happy. And when I go into the garage, I wanted to be happy,” Bhasin says, adding, “And that gives me happiness. Looking at a garage. It’s beautiful.”

How to get your dream garage

-Plan out the space in advance and make sure you can accommodate everything you'll want to put in the garage, says Huntington Station's Bill DeBlasio

-Try to keep the space for yourself and allocate other areas (shed, basement, etc.) for other family members' things. "When more than one person is using the space, junk accumulates there." DeBlasio says.

-Put up shelves and then you'll find a place where everything goes, says Cynthia Raven of Levittown.

-Follow up your passion. "If you see something and you're passionate about collecting, buy it," says Raven. "It's not the price that matter, but the value of things that speak to you."

-"If you desire beauty and order, get rid of the clutter and organize the things in your garage," says Oakdale resident Raj Bhasin.

-To preserve space, use flat panels and hooks, says Bonnie Reich, who owns Symmetry Closets, a Holbrook custom closet and storage company. Place deeper cabinets strategically so that they won't get in the way of your car, she adds.