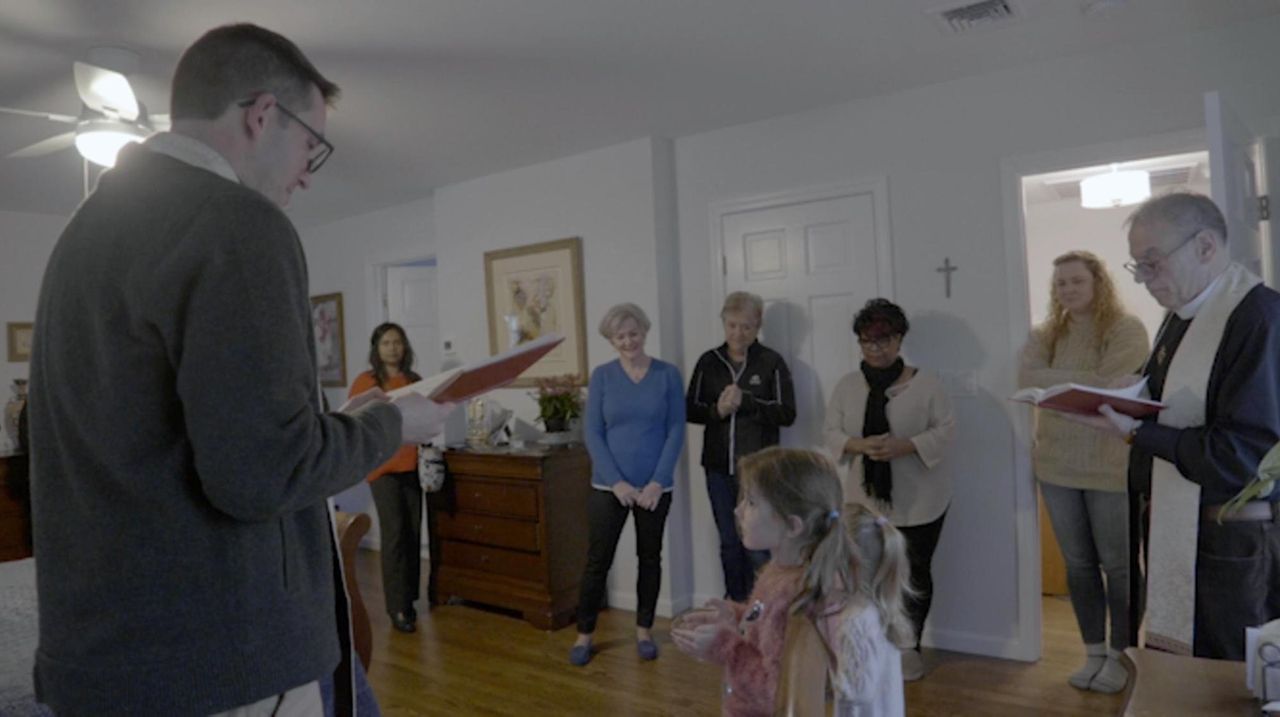 When a fire damaged Pam and George Tietjen’s Floral Park house — where six generations of the family had lived — they were devastated.

“Suffering through a house fire is a nightmare for anyone, but for my family it was very emotional,” Pam said of the blaze in the winter of 2018 that her son, daughter-in-law and their two children had escaped. “The house has always been in the Tietjen family for all its 83 years, and to see the devastation was heartbreaking.”

The family lived in rented quarters for nearly a year while the house was renovated. Relatives, friends and their church helped them endure a difficult period. When the Tietjens were ready to move back in, Pam said she was “very touched” that priests at the Cathedral of the Incarnation in Garden City, where she worships, suggested a house blessing. “The church blessing was a beautiful way to celebrate being home again,” Pam said.

The Tietjens are among several Long Islanders who have drawn on an ancient tradition of ritually “cleansing” their homes and ushering in good fortune to mark a new beginning.

The house blessing is “a really common ceremony in a number of religious traditions,” said Julie Byrne, professor of religion and Hartman chair in Catholic Studies at Hofstra University. “In some of the traditions, it goes back quite far to the millennia or centuries, and that reflects the fact that it’s a very common human impulse to want the space of your domicile to be safe and feel like a haven and feel like it’s blessed.”

“The idea of a home blessing was very comforting” for Pam, 61, an Episcopalian active in her church.

As priests from the Cathedral of the Incarnation in Garden City blessed the renovated three-bedroom, two-bath Cape on Jan. 28, Pam felt right at home. George was traveling and couldn’t attend the ceremony.

The blessing was held during the Feast of Epiphany, a traditional time for Christians to bless their homes. The Feast of Epiphany also celebrates “the arrival of the Magi to worship Jesus and offer their gifts to God,” Sniffen said. The initials refer to the three wise men, Caspar, Melchior and Balthazar, and the year 2020.

After the chalking, Sniffen and the Rev. Michael F. Delaney, a vicar at the cathedral, blessed the rooms as Pam’s granddaughters sprinkled “home holy water,” a mixture of water and salt in a bowl.

“A home blessing can be a powerful moment to celebrate the sacredness of life and sense of safety and home, which all human beings long for,” Sniffen said. “It is a wonderful way to connect faith to the environments which sustain us.”

Families with roots in the Indian subcontinent often mark their “griha pravesh” or home entry with rituals such as boiling milk, prayers or pujas, worshipping gods and goddesses, to invoke peace and prosperity.

Some Hindus set foot in their new home only on “auspicious” days, determined by the religious calendar. By sheer luck the Patels of Holbrook did just that, during the Diwali season last fall.

After closing on their four-bedroom, 1½-bath home, on Nov. 1, 2019, Vivek and wife Pinal Patel performed pujas in the kitchen.

For the “kalash” or metal pot puja, Vivek, 50, filled a copper pot with holy water from India’s Ganges River, coconut and rose petals, and placing the pot on the kitchen counter, said mantras to bless the house. As part of the stove puja, he drew a tilak, a religious marking, on the stove, with sandalwood paste, daughter Gayatri, 19, said.

Later, Pinal, 49, made sooji prasad, a sweet religious offering. More pujas followed when they moved in.

The griha pravesh, for Hindus, is also done to purify the space and cleanse it of negative forces, said priest Pipalmani Sigdel, 40, of the Asa’Mai Hindu Temple in Hicksville. Sigdel, from Nepal, performed similar pujas at his Hicksville house two years ago.

Hymns and prayers for protection

For Sonam Bhatia and Ricky Singh, buying their first home was a happy milestone but they were happier for their two kids excited about the pool in their four-bedroom, three-bathroom ranch in Dix Hills.

Because of the coronavirus pandemic, Sonam skipped a large party but she wouldn’t spend a night in the house without a blessing. So, on March 12, she had a small gathering asking “God to bless us and our home and to cleanse the home of any negative energy and evil eye,” Sonam, 34, said.

She, husband Ricky, 38, their children and an aunt also sang Chaupai Sahib Path, a hymn for protection and security. “Protect me, O Lord with your Hands; may all my heart’s desires be fulfilled,” says the opening verse.

After prayers, they made halwa prasad, a sweet religious offering, “because I wanted the first thing to ever cook in the new house to be a food offering for God,” Sonam said.

“The first thing we did was #sage #cleanse every nook and cranny as we walked around each room, visualizing our family living in this house,” she wrote in a post on Facebook, after she closed on the four-bedroom, 2½-bath Colonial in late February.

Lockel, who is the chief executive officer of American Red Cross on Long Island, her husband and children moved into the home and for several days repeated the sage cleansing, which has its roots in Native American tradition and is used to remove negative energy.

She also took an image of the Adya Ma, an incarnation of the Hindu goddess Kali, around her house and sought her blessings.

“I do Hindu prayers every day,” Lockel said. “My husband was raised Catholic... So those rituals and things we do is how we have adapted as a family.”

Verses from the Quran

Before Farida and Adnan Rangwala and their son moved into their Garden City home in June 2019, they consulted a head cleric at their community center for an auspicious time.

At 2:52 p.m. on Eid, the end of the month of fasting, they performed the “ghari mukwanu” or placing of the pot, a ritual practiced by the Dawoodi Bohra community, a Shia sect in India.

Entering through the front door, they “walked inside with our right foot first, and placed a pot filled with water in one corner of the house,” Farida said. “On top of the lid, we placed a red cloth and the Quran” and then recited a few verses from the Quran.

House blessings are not unique to homeowners or the religious, Byrne said: People moving into apartments want their spaces “cleansed” too.

People who are not necessarily in any particular religious tradition may “gather some friends in, burn some incense, light a candle, say some prayers ... to clear their spaces or initially bless their home,” she said. “English speakers might just have a plaque that as you walk in that says: ‘Bless this home.' That also, short of a ceremony, is something that’s expressing the same wish.”

It’s all about “a feeling that you want your home to be that safe space,” Byrne said.

Home blessings in other traditions

In Judaism, the home blessing ritual can be elaborate or simple, but at the heart of it is affixing or nailing the mezuzah to the right side of the front door.

The mezuzah is a scroll on which words from the Torah are written and enclosed in a case, said Judith Cohen-Rosenberg, rabbi of Temple Or Elohim, A Community Reform Congregation in Jericho. “We have them on all of the doors to all of the rooms except bathrooms or closets,” Cohen-Rosenberg said.

Biblical verses from Deuteronomy, which include the Shema, the central affirmation of Judaism, and begins: “Hear, O Israel, the Lord is our God; the Lord is One” are inscribed on the scroll. The case is often given as a housewarming or as a wedding gift, the rabbi said.

For Muslims, the Quran doesn’t prescribe a house blessing ritual and moving-in customs can vary, said Sadri Altinok, a native of Turkey and president of the Turkish Cultural Center Long Island in Ronkonkoma.

Customs also vary across the Middle East and other countries. In Turkey, he said, “when you buy a house, you call someone who can recite the Quran, you invite friends and family over to say prayers and pray for bounties for residents of the house, followed by dinner,” Altinok, 59, of Miller Place, said.

Another thing short of a home blessing but super common across Middle Eastern cultures — Muslim, Jewish and Christian — is a hamsa. “In Islam, there’s also something called a bonballoon, a sword-shaped plaque that has the shahada on it, which is also a blessing for the home,” Byrne said.

Shahada is the Islamic profession of faith, “There is no god but Allah, and Muhammad is his messenger”: the first of the Pillars of Islam.

The bonballoon and the hamsa, and the evil eye, are all in the category of apotropaia, used to keep harm from entering, Byrne said. In New Mexico, windowsills and doors are painted in bright colors for the same reason, to keep mischievous spirits away.