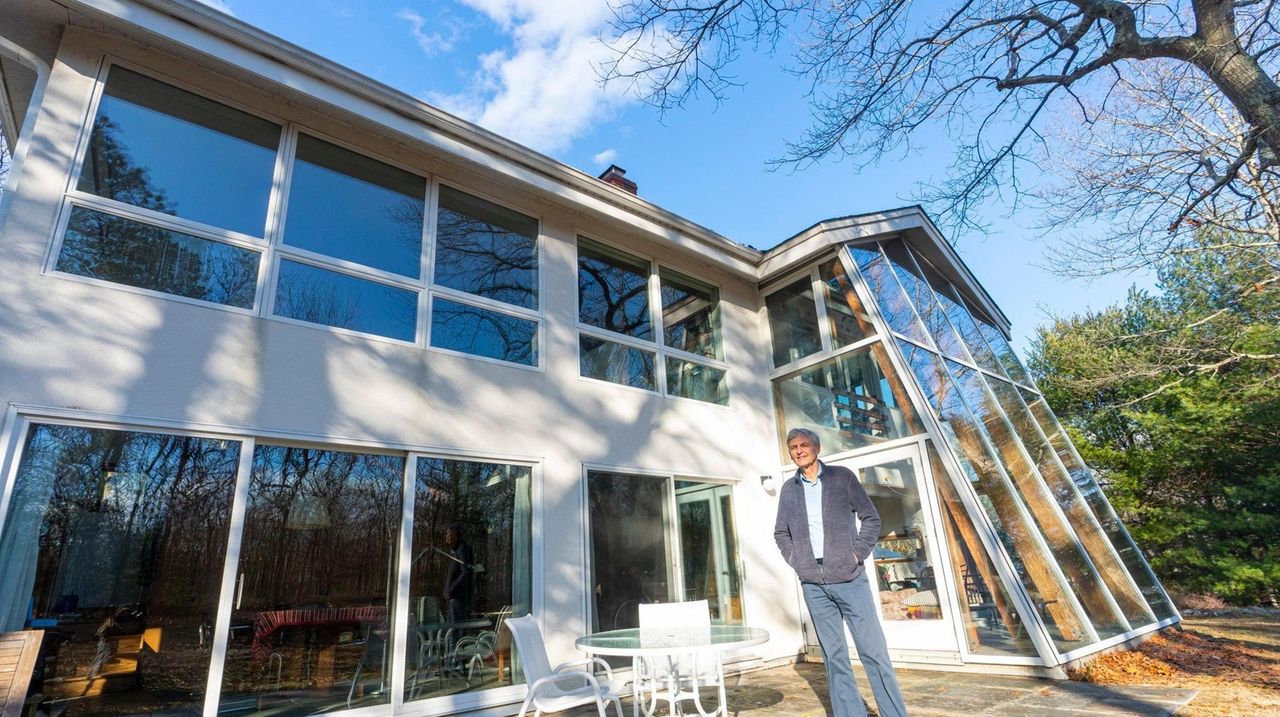 Gordian Raacke, executive director of Renewable Energy Long Island, speaks about how his energy efficient home is not only helping him save on his electric and heating bills, but also helping save the environment.    Credit: Randee Daddona

When Gordian Raacke, of East Hampton, checked his phone recently, he found out it was time to change the filter for his gas-fueled heating system.

While it’s hard to think of a more humble piece of equipment, Raacke’s is high-tech, measuring residue and letting him know when it should be replaced.

"It has a chip in it that measures the air flow going through the filter. If more particles get caught, it’s harder to blow air through," Raacke said of his Filtrete smart air filter, which costs about $21 each. "Once it has a certain amount of particles, it tells you to replace it."

With winter temperatures plummeting on Long Island, it’s time for homeowners to consider ways to stay warm without running up utility bills. Many residences leak air and shutting down those leaks and insulating can help make heating more efficient.

Home energy assessments, or energy audits, free through contractors approved by PSEG Long Island, can be a first step toward increasing efficiency and cutting energy bills. But what are some options to turn up the heat?

Here are eight ways that technology, and even habits, can help make your home more energy efficient.

1. Get smart about your thermostat

A smart thermostat, such as a Nest, typically costing $130, can save money, improve heating and increase ease, calibrating temperature based on your habits.

"It can automatically turn down the heat, when nobody’s home and turn it back on when you’re back home," said Raacke, also executive director of Renewable Energy Long Island. "It picks up on your patterns, when you turn it up and down."

You can schedule the thermostat remotely on your phone and override settings. "You turn it on an hour before you get home," Raacke said. "I find it very effective."

PSEG Long Island offers an $85 rebate for qualifying smart thermostats if you also have central air conditioning and enroll in a program to let the utility adjust your settings for peak summer days. "That helps them reduce peak demand on the system during critical peak days," Raacke said.

Darryl Dowers, of Syosset, loves what his smart thermostat does for his wallet.

"The heat comes on at certain times of the day and goes off at other times," he said. "You’re not running a constant temperature, 70 degrees when you’re sleeping. It saves a lot of money."

He said he doesn't know how much he saves with his Honeywell but that this thermostat has an energy usage function with data.

"It’s a really good feature," Dowers said of the way the thermostat adjusts temperature. "I don’t change it. I don’t really modify it. Other than if you’re on vacation."

2. Switch to a high-efficiency rating

If you’re replacing your heating system, you want to do it with an efficient unit that doesn’t shed too much heat.

"Most people can get a more efficient system that will cause their home to need less fuel and save money," Best said.

Raacke said modern oil or gas burners or furnaces are "more efficient in converting that fuel to heat."

Ratings help you compare products, to find out which works best and most efficiently. "Generally, if you’re replacing oil or gas, you want to look for the energy efficiency rating," said Mike Voltz, PSEG Long Island’s director of energy efficiency and renewables.

Voltz added that an 85 Annual Fuel Efficiency Utilization of AFUE rating or above is good. "More than that is great," Voltz added. "You want to look for the most efficient unit."

Heat pumps use compressors to provide central air-conditioning in the summer and heat in the winter.

"They’ve been around for over 30 years," Voltz said. "Why are they becoming more popular now? The efficiency is better."

Systems typically cost $7,000 and up with rebates from PSEG Long Island covering up to $1,000 a ton, depending on the fuel, he said.

"In the long term, it will be more economical," said Lena Tabori, an East Hampton resident who recently installed a heat pump.

Manufacturers developed cold climate heat pumps that work better in climates like Long Island. And heat pumps work best with houses that aren’t leaking hot and cold air. "You want to make sure, if you purchase and install a heat pump, that you have a well-insulated home," Voltz said.

About 300 heat pumps installed on Long Island over the past year were geothermal, often saving $1,000 a year, Voltz added.

If you have an old water heater, there’s a good chance it’s not well insulated, Raacke said.

You can buy an insulating jacket or water heater blanket insulation, typically costing around $40, he added.

If you have a newer water heater, Raacke said, it probably has good insulation. But there’s a way to tell whether the water heater is likely losing heat.

"Touch the outside of the water heater," Raacke said. "If it’s not very warm, then you have decent insulation. If you can feel the warmth, your insulation’s not good. You want to put extra insulation on top of it."

While most people think of photovoltaic panels when they think of solar, passive solar heat can help, too.

Large glass surfaces and stone floors help keep a house warm, and are typically part of the original construction.

A stone floor and more windows and sliding doors will add to the cost of construction but the resulting savings on heating cost will far outweigh the initial capital cost, Raacke said.

"You have to design the house for that," Raacke said. "It lets the sunshine in, collects the warmth from the sun coming into a stone floor."

Large glass surfaces on a house’s southern face pour light onto a stone floor that collects the heat.

"It helps to heat the house," Raacke said. "On a nice and sunny day, we don’t have the heat running. On a cloudy day, we need some backup heat from the gas boiler."

Solar isn’t for everyone, but it can be a sustainable and money-saving energy source.

"The economics of solar depend on the orientation. If your home faces south, it’s better," Voltz said. "If there’s no shade from trees shading the roof, it’s better."

If you’re considering solar, Raacke said you should give a solar contractor your address, so they can evaluate suitability. Get two to three estimates from reputable local installers.

"The benefit of going solar is you can significantly reduce your electric bill," Raacke, who also has solar panels, said. "And it’s the right thing to do for the environment."

Energy savings should defray some or all additional costs in payments done by installment, he said.

The installed price depends on a number of factors, including the type of roof, whether it is a one- or two-story house, the type of solar panels, etc., Raacke said.

Curtains can block, or let in the light — which means blocking or absorbing heat. Both can be good at different times of year or day. Open the curtains when the sun is out for a simple type of solar power.

"That helps to heat the house," Raacke said. "When the sun comes in, it gets warmer inside."

And drawing curtains at night can help retain heat, Raacke said. "It helps insulate from the cold outside," he added.