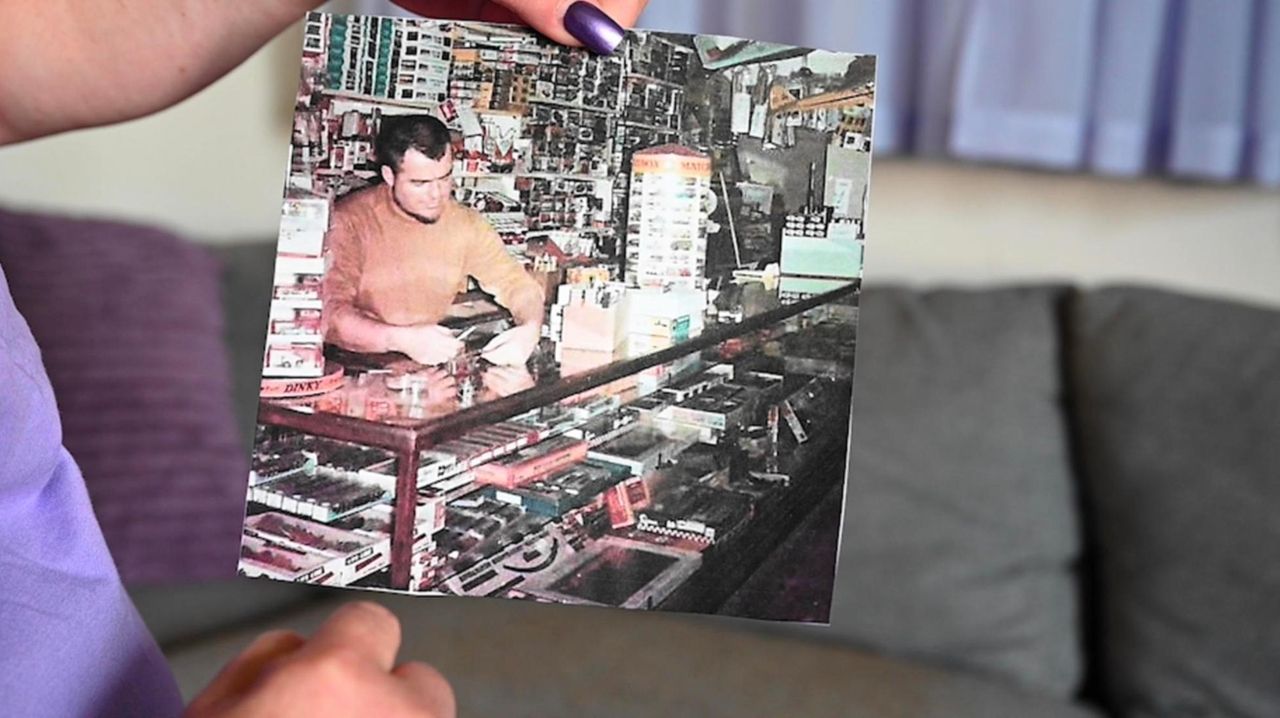 Maralin Merklin-Gray of North Bellmore reminisced about the hobby shop in Freeport that her father ran for decades. Credit: Newsday / Steve Pfost

In the 1960s when Maralin Merklin-Gray was growing up on Atlantic Avenue in Freeport, she stood in her front yard one day with her father, Dave Merklin, and watched a relic of a bygone era disappear.

The tracks of a trolley line from Brooklyn to Freeport were being torn up to turn Atlantic Avenue from a two-lane to a four-lane street — an improvement that also took part of the Merklins’ driveway, she recalled.

"I remember my father holding my hand and saying, ‘Take a good look — you’re never going to see trolley tracks here again,' " Merklin-Gray, now 57 and living in North Bellmore, recalled recently. Thoughts of her old neighborhood have been returning as Merklin-Gray helps organize the 40th reunion of the Class of 1982 at her alma mater, Freeport High School.

They are memories of a charmed life as one of three children of Betty and Dave Merklin, the owners and operators of Dave’s Hobby Shop, which opened in 1968, a few doors from their two-family house. The cluttered shop, which sold plastic model cars and airplanes, was a magnet for Long Island’s baby boomer hobbyists.

"We knew everybody and everybody knew me because they all came into the hobby shop," said Merklin-Gray. A self-described tomboy, she said, "I had a dollhouse and loved my dolls," but also played with model cars and rockets from her father’s shop.

She canoed on Freeport’s canals, clammed on its shores, and ate fried flounder dinners caught in the bay by her grandfather, an avid fisherman.

Much has changed about Atlantic Avenue — and Freeport itself — since the mid-20th century of Merklin-Gray’s childhood. The A&P supermarket building where the Merklins shopped for groceries is now a CVS, and the local farmstand where little Maralin crossed the street regularly to buy cider is a deli now, she said.

That diversity is reflected in local businesses, said Jorge Martinez, 59, who immigrated with his family from Cuba in 1968 and 12 years ago was elected as the village board’s first Hispanic member. "When I first came to Freeport in 1976, one of my grandmother’s favorite things was to walk with us to the Woolworth on Main Street for a 5-cent ice cream," said Martinez, Deputy Commissioner of Nassau County's Department of Human Services, Office for the Aging.

"Those days are gone, and now we have a very vibrant multicultural business community where on any given day you can have Italian food, Jamaican jerk chicken and pupusas all on the same block."

Throughout the decades, Atlantic Avenue has served as a sort of second downtown after the village’s Main Street. Denise Rushton, a trustee of the Freeport Historical Society, said that the street has "historically been part of the backbone of the village," as a commercial strip and an entryway to the Nautical Mile’s "large fishing industry" and waterfront restaurant scene.

Freeport resident Paula Corazza Werner, 56, also grew up on Atlantic Avenue in the 1960s and ’70s. She was the youngest of four sisters living in the house next door to Merklin-Gray, who remains a friend. "It was a really good town to grow up in," Werner recalled. "Everybody knew everybody, and families were a lot bigger then."

The kids on the block played "I Spy Wolf" (a hide-and-seek game) and Red Light, Green Light, 1-2-3 in vacant lots and backyards with few fences, Werner said. Atlantic Avenue even had a pharmacy with an old-fashioned soda fountain.

"It was a treat when I was a kid to be able to go there and get hamburgers and a soda, or even get an ice cream," Werner said.

Dave Merklin, whose parents had moved to Freeport from Middle Village, Queens, was born in 1935. His father, an engineer, was disappointed that the boy didn’t follow in his professional footsteps, Merklin-Gray said. "My father said, No, I want to own a hobby shop." At age 12 Dave Merklin got a job repairing model trains for the Nassau Hobby Center, which is still in business after 75 years at its second location in Freeport.

Chris Hirschberg, 38, of Lindenhurst, is the third generation to run Nassau Hobby Center, after his grandfather, Ralph Hirschberg, and his father, Charles, now 66 and retired and living out west. The shop, which specializes in model trains, cars, puzzles and Lego kits, has kept busy.

"If anything, we were busier than ever during the pandemic," Chris Hirschberg said.

Dave Merklin worked for the Hirschbergs until his 20s, when he decided to reach for his childhood dream. "He went to the owner [Ralph Hirschberg] and said, ‘I want to open my own hobby shop, but I’m not looking to compete with you,’ " Merklin-Gray recalled. It was an amicable separation, Chris Hirschberg said. "Dave used to come into the store to look at models all the time."

Dave’s Hobby Shop was a bit of a Dickensian curiosity, say onetime patrons. A review in Newsday from the store's early days called it a place of "magnificent clutter" specializing in "anything in plastic," with an "abundance of dollhouses and related paraphernalia and railroading items, plus a smattering of wooden ship models."

Gary Lewi, 68, of Syosset, a public relations executive in Manhattan, remembers it as a "magic" place that sparked his imagination on regular visits while growing up in North Merrick.

"The first place I drove to when I got my driver’s license was his hobby shop," Lewi said. He described Dave Merklin as looking like a cross between "a grizzled sea captain and a hobby gnome." Lewi, a collector more than an assembler, said that some of the "model kits that I bought 20, 25, 30 years ago are sitting on my shelf in my garage."

As a young teen, Merklin-Gray worked at her dad’s side. "He was a tough boss," she recalled. "You had to keep going whether you were taking care of customers or cleaning shelves." (Nowadays she understands that his toughness came from wanting his children "to build a work ethic.") She helped judge the shop’s model-car contest, which awarded a prize to all participants, and was delighted one year when a girlfriend of hers won top prize in a competition dominated by boys.

At age 14, however, Merklin-Gray quit her job at the hobby shop to pursue extracurricular activities at school. She studied art and business at Nassau Community College and founded a graphic design business that she closed in 1999 because, she said, "the industry had changed."

Dave’s Hobby Shop survived into the 20th century despite changing tastes in toys, and even a car crash. Early one morning in 1994, the driver of a vehicle going east on Atlantic Avenue fell asleep at the wheel, and the vehicle crashed through a shop wall, landing on and destroying antique wooden ship models.

Dave Merklin closed his shop doors for the last time in 2011. "He had dementia, and it was becoming increasingly difficult to manage the store," Merklin-Gray said. He died four years later. Merklin-Gray’s mom, Betty, retired to her native West Virginia.

Said Merklin-Gray: "I could never get him interested in hobbies."

Trolleys are most often associated with San Francisco, but they were also a public transportation option on Atlantic Avenue in Freeport during the early 20th century, according to Denise Rushton of the Freeport Historical Society.

As early as 1906, the New York and Long Island Transit Co. was running a trolley from Brooklyn to Freeport, a route that included Atlantic Avenue, according to historical society records. A 1906 photo in the society’s collection depicts a trolley with a passenger catcher. The scoop-like device was mounted on the front of the trolley car "to make collisions with pedestrians more survivable by capturing them rather than having them get slammed by the body of the car or wind underneath it," according to historical society research.

Visitors can see an exhibition, including trolley photos and maps, by appointment on Sundays at society headquarters, 350 S. Main St., 516-623-9632, freeporthistorymuseum.org