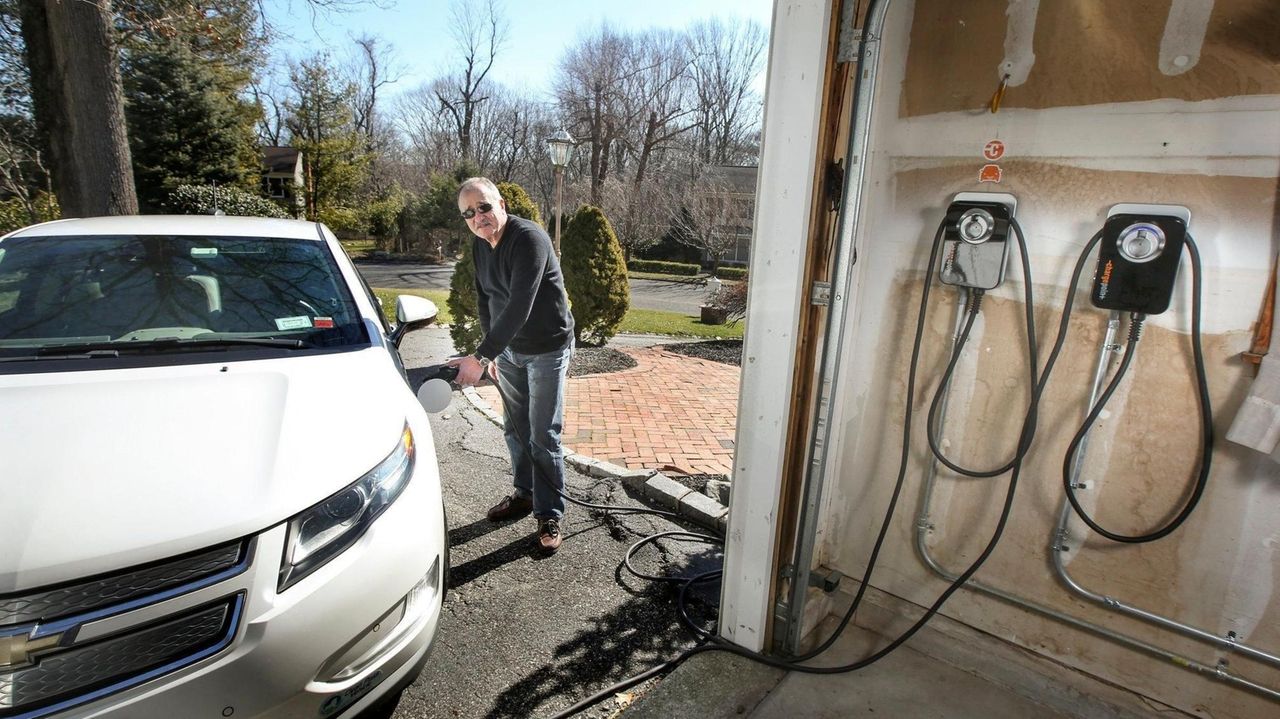 “Going green!” It’s a catch phrase that’s long been inspirational but now seems both urgent and trendy as well. With a constant barrage of disconcerting environmental news these days ranging from climate change to threatened aquifers, there’s never been a better time to reduce your carbon footprint.

One of the consequences of the coronavirus pandemic, catastrophic as it is, has been a dramatic reduction in the level of automobile emissions worldwide because of the decline in traffic. Activists hope this leads to greater environmental consciousness, and a willingness to take on climate change, which, like the virus, is a global threat.

Many Long Islanders are doing their bit — and some are saving big money in the process. Indeed, 50 years after the first Earth Day celebration on April 22, 1970, it’s never been easier to go green. With the aid of several local homeowners who are already committed to the cause, we’ve assembled a blueprint to help get you started. Follow their examples and help lead the way to a greener future that starts right at home.

“Big trash bags filled with garbage put stress on the environment,” says Heather Lanza of Southold. “They all have to go somewhere, and their contents need time to break down. Composting is a natural way to reduce our overall trash volume.”

Lanza says fruits, vegetables, flour and bread-based waste can all be added to compost. Toss these in an inexpensive metal compost canister with a carbon filter that you keep in the kitchen and empty it into a compost pile or compost bin when it fills up. Avoid adding meat scraps, fish or fowl as those items can attract unwanted pests.

“I have two rotating plastic compost bins in my yard,” Lanza explains. “They look like 55-gallon drums. I just fill them up and flip them over every now and then. Adding dead leaves or other organic material dilutes scents and helps the contents break down quickly. Toss in a shovelful of soil to provide microbes that speed up the degrading process and, in a few months, you’ll be left with beautiful compost you can add to your native gardens.”

Replacing incandescent light bulbs with LEDs is an easy way to lean green, suggests Tony Palumbo of East Islip. “LEDs use a fraction of the electricity traditional light bulbs consume and are available in a wide variety of shapes, sizes and light tones,” he says. “Swap them all out — even in your high hats, chandeliers and appliances — and you’ll see immediate savings. As a rule, the whitest and brightest are best for indoor use because they look the most like true sunlight.”

Switching high-powered cleaning products for environmentally friendly choices can start you down a greener trail, according to Tara McDermott of East Islip. “Make the switch to replace staples as they run out,” she advises. “There are also plenty of recipes for homemade cleaners and laundry detergents on the internet. Most take just minutes to create and, better still, require no plastic packaging.”

A Free Energy Efficiency Home Assessment is super helpful if you are serious about greening your home, says Gordian Raacke of East Hampton. “A certified professional comes to your house and uses high-tech tools to test for air leakage, determine how much insulation is in the walls, and how much carbon monoxide your stove, boiler and heating equipment emit. A computer-generated report then pinpoints where your home is wasting energy daily and offers suggestions to fix each problem.”

Solutions typically start with weatherization: sealing windows, doorways and rim joints in the basement, or adding insulation, for example. Follow the recommendations and your home will be warmer in winter, cooler in summer and less drafty overall. You’ll save money and help the environment by burning less heating fuel and using less electricity. Free audits are available through PSEG-LI (nwsdy.li/energy) and New York State (nwsdy.li/nyclean).

The gold standard for going green, solar panels have come down significantly in price over the past few years while electric bills continue to rise.  Sized properly, they can reduce electric costs to net zero while also increasing home value. A 2019 Zillow survey (nwsdy.li/PSEG) found metropolitan area homes with solar panels sold at 5.4% more than those without. That’s an extra $23,989 for a typical New York home.

The total cost for a typical solar installation (roughly 30 solar panels) on Long Island runs between $30,000 and $40,000 before any federal, state or local incentives are applied. After incentives, the net cost should be between $15,000 and $25,000 with an estimated six-year breakeven point.

McDermott financed a 32-panel, 10.6-megawatt system on her roof that meets 100% of her electric needs. “Our solar system generates more electricity than we consume so we get a credit with PSEG each month and put that toward charging our hybrid-electric Mitsubishi Outlander,” she reveals.

Palumbo has a 39-panel array with a battery backup that covers all his electric usage, including 220v charging stations for his two Chevy Bolt hybrid electric vehicles. “I love it,” he says of the solar option. “If the local power grid goes down, your system keeps running. Because you’re not using electricity from the power grid no fossil fuels are being burned —  and you save a ton of money. My electric bill is less than $200 per year!”

Solar is the dream, reminds Raacke, but not every home is suitable. South-facing roofs are preferable, although installations can be done on some east- and west-facing roofs.

Note there are significant federal and state income tax credits for solar installation, but they are stepping down at the federal level. Last year’s credit was 30%, this year it is 26%, so sooner is better if you go this route.

Plug in and go

With solar panels installed, a plug-in hybrid-electric vehicle (PHEV) makes a lot of sense. These have dropped in price in recent years while their electric-only range has increased, and a federal Qualified Plug-In Electric Drive Motor Vehicle Credit (nwsdy.li/taxcredit) could give you back up to $7,500 on your purchase.

With a PHEV, the gas engine kicks in when electric battery power drains below approximately 20%. Unlike traditional hybrids, their larger batteries can be plugged in for recharge. PHEV models generally improve both fuel economy and acceleration when compared with gas-only vehicles. McDermott has a Mitsubishi Outlander with an electric range of 33 miles before it switches to gas power for a total range exceeding 300 miles. That’s roughly 75 mpg for a fully charged battery and tank of gas.

“My first Chevy Bolt cost $47,500 and had an electric range of 35 miles,” says Palumbo, who drives about 40,000 miles a year. “My newest cost $36,000 and has an electric range of 53 miles. It was really the cars that got me going green. In 2008 I had back-to-back months with a $1,500 gas bill for my family’s three cars. Now, for two plug-in hybrid electric vehicles we pay less than $200 per month — and far less in maintenance costs — while significantly reducing our emissions.”

As the world struggles with the explosive spread of the fearsome coronavirus, people are working from home, traveling less, going to the store only when necessary, and prohibited from dining out or gathering together. While the near total lockdown has resulted in a drastic change of lifestyle across the country, these measures are also incidentally reducing pollution and shrinking our combined carbon footprint.

Satellite imaging designed to detect emissions in the atmosphere linked to cars and trucks shows huge declines compared with the same March dates in 2019 in the air over New York and other large metropolitan areas. In nearby New York City, researchers at Columbia University’s Earth Institute have stated that monitoring of pollutant levels from instruments attached to a building on the City College of New York campus in Harlem have shown 10% drops in carbon dioxide and methane gas, and an astounding 50% drop in carbon monoxide, beginning March 13. While scientists caution this is likely a temporary effect, and pollution levels can change based on various factors including weather patterns and wind direction, it does suggest that reducing our carbon footprint can have a nearly instantaneous positive impact on the surrounding environment.

“Sometimes it takes more than one crisis to wake us up,'' says Raacke. “Scientists are telling us there is no time left to put off making changes that can green our world. The time to act is now.”

•    A planner for the Town of Southold, Heather Lanza has long been involved in solving environmental issues and is an expert on home composting, recycling, organic gardening and reducing the waste stream.

•    Tara McDermott is director of stakeholder relations for EmPower Solar and a board member for the Long Island Solar & Storage Alliance (LISSA; nwsdy.li/solar). Since buying her East Islip home two years ago, she has steadily upgraded with green improvements including a 32-panel solar system that meets all her electricity needs and a plug-in hybrid electric vehicle with charging station (PHEV).

•    Anthony Palumbo of East Setauket is a recruiting consultant. He owns two PHEVs with 220v charging stations and a 39-panel solar system with battery backup.

The following additional tips from Renewable Energy Long Island can help homeowners save energy and money while reducing their carbon footprint and making their homes more comfortable.

1. Upgrade to smart thermostats to save money on heating and cooling costs year-round.

3. Consider heat pump technology to replace existing A/C or heating equipment, including water heaters and clothes dryers. Heat pumps are more efficient and can be powered by renewable energy sources.

4. Pool owners should get an energy-efficient variable speed pool pump and consider a solar and heat pump pool heater: nwsdy.li/rebates