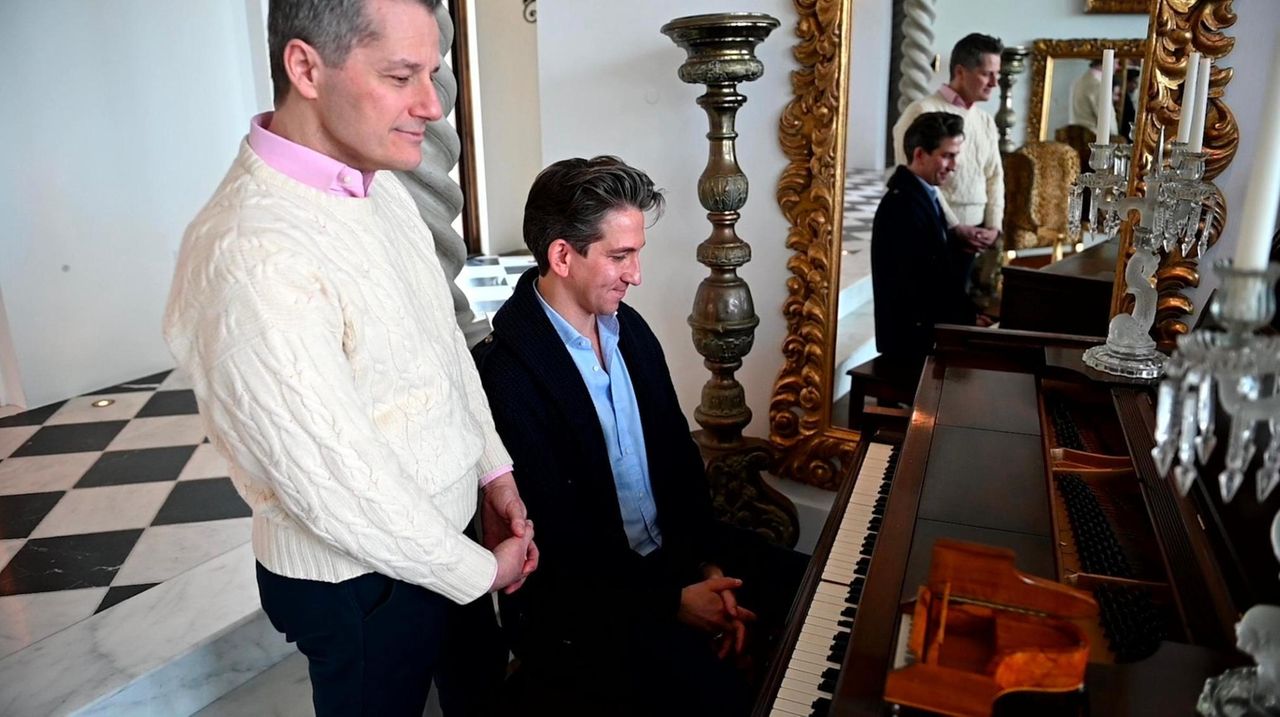 Tom Postilio and his partner Mickey Conlon were the stars of a hit HGTV real estate show called “Selling New York.” They have been trying to turn Nissequogue into a tony alternative to the Hamptons. Credit: Newsday / Steve Pfost

Tom Postilio stares silently at the expanse of water outside the 10-foot-tall bank of windows across the back of his home. The wind had picked up and whitecaps dance all the way across the surface to a blue strip of land in the distance. It’s like a painting come to life.

“It’s easy to forget where you are,” he says, as if waking from meditation. “You could be looking over the Mediterranean.”

Actually, he is staring at the Long Island Sound. And the mysterious strip of land in the distance is called Connecticut. Even more prosaic is the fact that his dream view is from the shores of Nissequogue, a mid-Island village not generally considered an exotic locale.

All that could change if Postilio and his husband, Mickey Conlon, two real estate “superbrokers” whose Manhattan celebrity client list includes the likes of Liza Minnelli, Barry Manilow and Lady Gaga, have their way. Known for their innovative marketing techniques, the two just completed the renovation along with some new construction on an 11,000-square-foot weekend village home and now are campaigning to raise awareness of the area as a Hamptons alternative.

“Some people from the Hamptons have moved here already,” says Conlon, flashing a conspiratorial smile. “But very quietly.”

Using the home as a safe house wasn’t in mind when they began their three-year project, but they also have discovered the area’s country spaces make it a fine place to self-quarantine. Since decamping there from Manhattan seven weeks ago, they have busied themself with cooking, catching up on reading and taking beach walks, they say.

“We have friends in the city who haven’t been able to leave their apartment,” says Tom. “We knew we were fortunate to have this place before and we appreciate it tenfold now.”

The virus shutdown also has curtailed their promotional efforts for the area, but they are still making inquiries and looking for future homeowners for when the market returns.

One day, they insist, Nissequogue will be the new “in” spot.

“The next hot neighborhood doesn’t emerge from the ether,” says Postilio. “It is created.”

They tick off the advantages: Situated 50 miles from Manhattan, the sparsely populated community is half the distance to the East End. Water views? Got that. A wide strip of the triangle-shaped land mass faces the sound and is bounded by a river on one side and a harbor on the other. This means plenty of town beaches and preserves for hiking, biking, canoeing and fishing. There is a private yacht club, equestrian center, golf course and two local vineyards. Homes are zoned on 2-acre properties and the village has a ban on industrial real estate (the connected sister village of Head of the Harbor also is undervalued and overlooked, the two say). Its rural vibe is reinforced by the still operational, 163-year-old St. James General Store.

“A friend calls it the perfect mixture of country and water,” Postilio says.

“They’re trying to increase the wattage of the spotlight a little,” he says. “It’s a bit of a well-kept secret.”

Both of the brokers grew up nearby: Tom, 49, in nearby Hauppauge and Mickey, 43, in St James. The couple started looking for a weekend retreat both upstate and in the Hamptons before finally realizing Dorothy was correct in “The Wizard of Oz.”

“Sometimes you have to move away and come back to a place to truly see it,” says Postilio.

Their California Spanish-style residence was purchased from a relative seven years ago. It sits a stone’s throw away from the Sound and close to a wildlife sanctuary. The 12-foot-high entrance doors that greet visitors open into a foyer with a cathedral-tall ceiling. In the gourmet kitchen, a painting of Judy Garland presides over the dining table. CinemaScope views of the water are everywhere, especially the music room, which has 11-foot-high windows and a kaleidoscope of mirrors on the walls.

The owners added a second floor during the project and several of the sleeping quarters — the “Sinatra” bedroom and the “Noel Coward” bedroom, for instance — reflect their idols.

Visitors sometimes ask why they have no pool. Tom nods at the Sound.

Nissequogue is the site of the original Town of Smithtown settlement which dates back to 1665, according to Smithtown historian Bradley Harris. The legend of its founder, Richard (Bull) Smith, making a pact with local Native Americans to keep whatever land he circled in a day’s time on his trusty bull apparently is bunk, says Harris. In reality, Smith was an astute businessman who negotiated with the English and locals for the land, then fought his way through the courts to secure it. After that, it was passed on to relatives.

“They say there were so many family members around back then that if you passed someone in the street and weren’t sure who they were, you just tipped your hat and said, ‘Morning, Mr or Mrs Smith,” says Harris. “And most of the time you were right.”

It even had a bit of bling at one point. With no air conditioning, Broadway theaters at the turn of the century were too hot to stay open in summer, a fact that drew an “actors colony” of Nissequogue vacationers. This included the likes of Lionel Barrymore, Buster Keaton and Irving Berlin. A 1903 New York Morning Telegraph headline read: “Stage favorites loaf the summer away, raise pigs and cabbages, play baseball and go a-fishing in the bay fifty miles from Broadway.”

Showbiz also is familiar territory for both brokers. Postilio toured the world as a singer with the Glenn Miller Orchestra. Conlon, noted for his colorful bow ties and towering hair, was a Broadway producer. The two turned to real estate after the last recession and became well-known as hosts of “Selling New York,” an HGTV show that lasted for eight seasons. At Douglas Elliman, they have racked up over $2.5 billion in sales over the years.

The two sometimes use a script, lighting and set design to develop a fantasy about a property. Postilio has been known to break into song to pitch a deal. When they represented the Manhattan home of a songwriter, they edited a video to include one of his tunes. Joan Collins called them after she had trouble selling a co-op. They brought in designers and high-end furniture dealers who staged it so well buyers got into a bidding war over it.

Despite the fact that there are only 550 homes in the Long Island area, Mayor Smith believes there is room for more since many have multiple-acre lots. But things move slowly there.

“People returning to the area always remark how little it’s changed,” he says.

Postilio and Conlon say their emphasis is on historical preservation, not development.

Their first sale was an 8-acre estate next to the Nissequogue River that went for $3 million. They recently put a historic residence situated on 19 acres next to Stony Brook harbor on the market for $2.5 million. Known as the “Homestead,” the residence is a grand, white-shingled structure that has been in the Smith family for three centuries.

“It’s seeking a steward to bring it into the next century,” says Postilio.

Of course, not everyone is swayed by this boosterism.

“Good luck to them,” says Nicholas J. Planamento, an associate broker with Town & Country Real Estate who sells property both in the Hamptons and on the North Fork, “but there is no place like the Hamptons.”

Yes, he adds, the drive may be a bit much — unless you have a helicopter — but the East End is the place to be as far as social connections, glamour and access to the Atlantic. Sure, the sunsets in Nissequogue are great. “But the bottom line is people want an ocean,” says Planamento.

True or not, what they do have in Nissequogue is plenty of quiet, says Conlon.

“The most amazing scene out here is no scene at all,” he says.