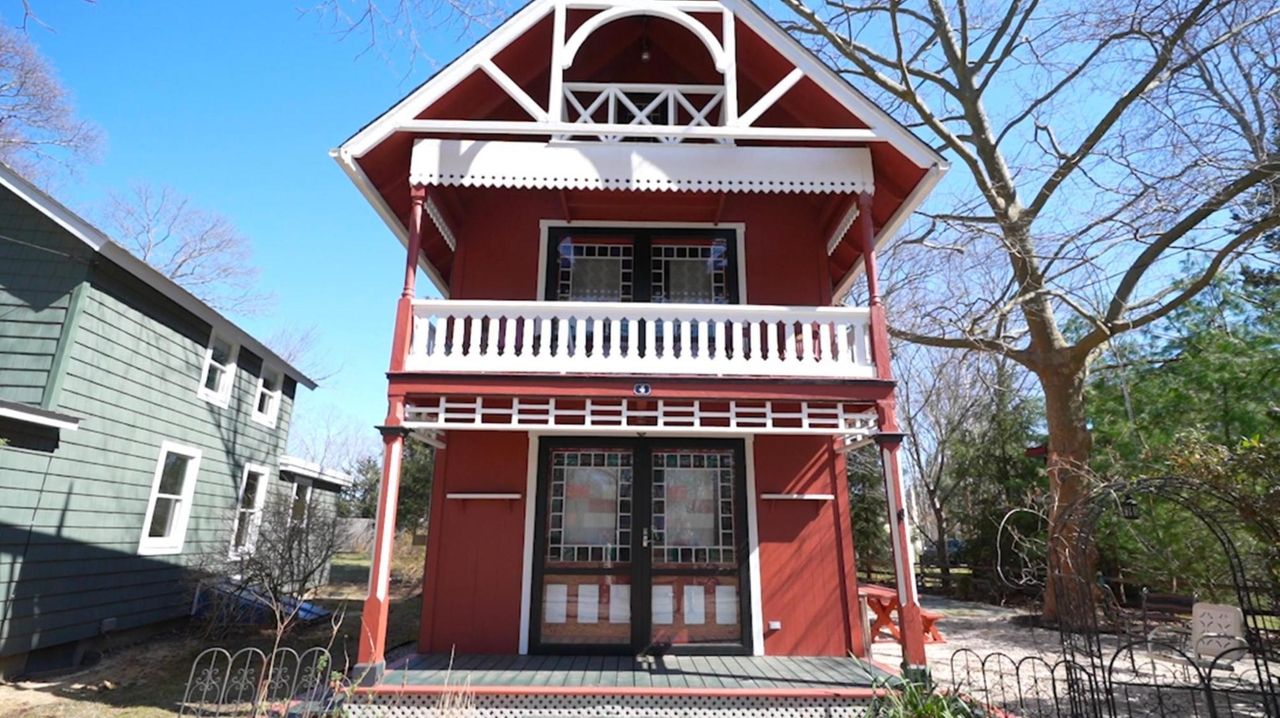 Twelve years ago, George Morfessis bought a house in Jamesport with charming exterior latticework, colorful stained-glass windows and a small outbuilding. It turned out the house has an extensive history, as part of a former Methodist campground that began in 1834 among a grove of oak trees.  Credit: Randee Daddona

George Morfessis was taking a drive on the North Fork of Long Island about 12 years ago when he made a wrong turn in the hamlet of Jamesport. Coming across the historic Campground Circle, he was propelled back in time.

After noticing a "for sale" sign on a turn-of-the-last-century home, Morfessis and his wife, Eftihia Thomopoulos, decided to make it their summer escape from Bellerose. They outbid a developer and set to work fixing it up.

The house, with charming exterior latticework, colorful stained glass windows and a small outbuilding, has an extensive history as part of a former Methodist campground that began in 1834 amid a religious revival, among a grove of oak trees. Many of the families there have deep roots.

“It’s rare to find a house that was built in the 1880s or ‘90s,” says Morfessis, 56, who’s deputy commissioner of information technology for the Town of North Hempstead. “We bought from the grandson of someone who was there 70 years.”

Members of the United Methodist Church held summer religious camp meetings on the site over the ensuing decades, following a tradition with ties to the American West, where frontier communities lacked churches.

The Methodists in Jamesport built an auditorium, boarding house and dining room and owners of the surrounding 20 lots pitched tents on permanent platforms. Behind each tent was a small structure called a cookhouse, where the tents were stored in the winter. In the early 20th century, the owners began turning the tent platforms into small summer cottages and some connected the cookhouses. Most homes were not winterized. They face inward toward a circular green.

The summer in Campground Circle revolved around the annual camp meeting in August, which drew prominent preachers from the metropolitan area, with concerts and parties rounding them out.

“All she commented on were what kind of hats people were wearing and that there was ice cream,” says Wines, who noted that his family were not Methodists, but nondenominational Protestants. “It was more social than religious. People came from all over for those camp services.”

Similar communities that have sprung up from former Methodist campgrounds include Tiny Town in Merrick.

Eventually, the camp meetings disappeared and families turned Campground Circle into a summer community, though residents of the circle gather one evening every August on the center green for a covered-dish supper.

Growing up in the 1940s, 81-year-old John Peck remembers piling into the family car in Queens Village each summer weekend and heading east to stay in their circa-1906 home, which had its original tent stored in the attic. He and his siblings spent the summers playing outdoors and clamming in nearby Peconic Bay.

Peck’s parents winterized the home in 1972. It was updated more extensively in 1990, after which Peck retired from Grumman and began living in the home year-round.

Though the camp meetings ceased, there was still plenty of socializing in the summer community. Barbara Kimmel, 76, met her husband Ford, 80, at a dinner party hosted by her aunt and uncle.

Kimmel, who grew up in Bronxville, in Westchester County, remembers summers of playing hide and seek in the woods and placing pennies on the railroad track so they would expand after the train rumbled over them.

The Kimmels eventually moved to California, but still drove cross country with their kids to spend summers in their circa-1911 Jamesport cottage. Their son, Scott, a veterinarian, lives in the cottage year round.

Earlier this year year, in light of the COVID-19 pandemic, the scene at the campgrounds was a bit different, residents said. The Kimmels decided to remain in California instead of making the trip east and some residents from out of state have rented out their cottages for the summer.

“What was going on in New York was just too dangerous,” Kimmel said. “We're missing it terribly, but we're safer here. It’s sad, since I always felt to me that Jamesport was my refuge from the world.”

It’s not new for the campgrounds to have visitors looking for an escape from the city. For a time, kids from New York City came to the area as part of the Fresh Air Fund and stayed in the lodge the Methodists had built, says Alan Stromberg, another year-round resident.

Stromberg, 79, who has owned his grandparents’ Victorian cottage since 2006, estimates that just four of the 12 properties in Campground Circle are not winterized. Several have been torn down.

While there has been increased interest in rentals at Campground Circle and across the East End over the past few months, it is rare for homes in this community to come up for sale, as many are passed down to family members, says Victoria Germaise, an agent with Douglas Elliman Real Estate who has listed properties in Campground Circle.

There has also recently been a push by longtime residents to try to preserve the original tent properties. Kimmel says she’s encouraging the members of the community to have their houses declared historic landmarks.

The hope, says Stromberg, is to retain the community’s mystique, which has drawn in newcomers, like Morfessis, who want to preserve the historic structures.

“Everyone’s maintained the houses in their historic style,” Stromberg says. “Some people when they come into the circle they think it’s a fairy tale place.”

JAMESPORT HOMES ON THE MARKET

Jamesport is a mix of historic farmhouses, midcentury ranches and new homes, with many close to either the Peconic Bay or the Long Island Sound. Here are five currently on the market.

Features: A circa-1913, multifamily Victorian with six bedrooms and 5½ bathrooms

Features: A three-bedroom, 3 ½-bathroom condo in a private community on the Sound that overlooks a 25-acre pond.

Features: A three-bedroom, two-bathroom ranch a half-mile from a public bay beach.

Features: A three-bedroom, 1½-bathroom ranch with an in-ground pool.