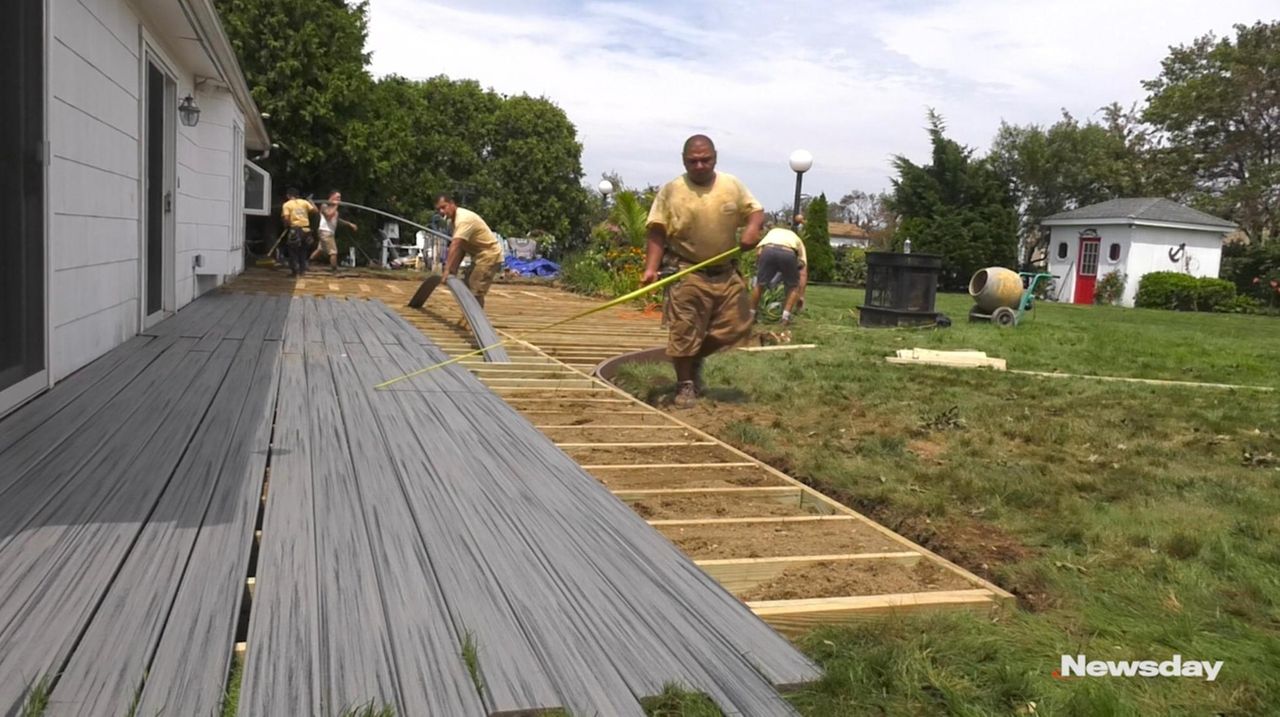 With Long Island residents spending more time in their homes amid the pandemic, many, like Rob Chiffone of Copiague Harbor, are looking to renovate their properties. Credit: Newsday / John Paraskevas

Dawn Edwards couldn’t wait to have the work started.

New York was awakening from coronavirus limbo and had just reopened construction. Edwards wanted her bathroom fixed up, shopped online for a sink and vanity and found one that looked right — until it arrived at her doorstep, not just the wrong color, but broken.

"It wasn’t really gray," said the 51-year-old Freeport resident and financial adviser. "You don’t know how it will look until it arrives."

Edwards was among thousands of sedentary Long Islanders eager to upgrade their spaces who found themselves getting a crash course in the pleasures and pitfalls of home renovation.

With the economy reopening, home renovations went into overdrive on the Island.

"A lot of people are cocooning at their house, working from home," Brett said. "They walk around the house and say, ‘I never noticed how bad my roof, siding or windows look.’ We’re doing more work.’"

A renovation revival makes this a good time to look at how to avoid common mistakes and follow best practices, including basic rules such as using licensed contractors, general contractors for big projects and paying in installments.

"It never hurts to ask for a reference," said Brian Herz, vice president of sales for Sterling Floor Designs, in Commack. "The big thing to take away is do your homework."

When it comes to flooring, what you don’t see matters as much as what you do: the sub floor or surface beneath the flooring is crucial.

"The finished floor is only as good as the sub floor it is being put over," Herz said.

Some choices include ceramic tile, vinyl tile, new wood flooring and refinishing wood flooring. Luxury vinyl plank or LVP, vinyl that looks like wood, is in fashion, and can save money over wood.

Some wood floors can be refinished, while others may be too damaged, Herz noted. Woods range from hickory to ash, but Herz said oak, relatively resistant to denting and scratching, is most popular.

Woods are often graded in knots, mineral staining and lines, which determine the look rather than quality. The National Wood Flooring Association grades participating mills’ wood and provides a stamp of approval.

Consumers and contractors should make sure the type of flooring matches what they asked for, including price and color, Herz said.

It’s relatively easy to buy materials online for bathroom renovations, but nothing beats seeing it for yourself when it comes to tile, said Charlie Torres, owner of Charlie T. Contracting in Island Park.

"Go to the store and see the tile," Torres said. "You have to see it, touch it."

Today, Torres said, many customers choose tile not only for bathroom floors, but rising 4 feet on walls.

Residents often don’t know who will do the work, wrongly believing the contractors they hired will do it all.

Residents can get tile designs and other information and ideas by searching "bathroom renovations" on the Internet.

Dawn Edwards, for instance, has installed motion-detector lights in her bathroom.

"I changed colors in the bathroom," said Edwards, who used Brooklyn-based O.J. Mechanical Corp. for plumbing. "Now it’s gray. Now, I have to shop for new stuff like a rug and soap dispenser."

Features such as heated bathroom floors — with heated mats installed beneath the tiles — can add a touch of luxury, Torres says.

Edwards, who has lived in her house for 16 years, said renovating her kitchen meant moving items out of the space.

"I never thought of all the stuff in my kitchen that I had to find a place for in my home," she said, noting she placed dishes, glasses, Tupperware and other items on her dining room table.

Make sure you’ve cleaned out rooms entirely before work begins. Timing for delivery is key, she said, noting delays in obtaining materials and appliances can stall work.

Edwards got a touchless faucet operated by a motion detector — something she saw at a friend’s place.

Her kitchen is now brighter, with new lighting. An island has replaced the peninsula. But the old appliances remain.

"To come home to a kitchen I absolutely love," is her goal, she said. "Prior to the pandemic, I used to entertain a lot. I can’t do that right now."

The roof: A high priority

Charles Davis bought his 3,200-square-foot Freeport Colonial house in 2016 and in 2017 replaced the roof when water began cascading from built-in gutters.

He says he picked King Quality to work on the roof because they did a good job replacing his 48 windows and siding.

Windows, siding and insulation can impact a roof, which Brett, of King Quality, says shouldn’t be looked at in isolation. "All these things interact," he said.

While roofers should be licensed by counties and other authorities, that only ensures they’re licensed and insured, not adept at work, he says. "The best way to find a remodeler, but roofing especially, is through the manufacturer," he said. "You want a contractor certified by the manufacturer."

Davis liked the fact that King Quality was certified by roof maker GAF as a "master elite contractor," indicating training and experience installing their product.

Homeowners can use apps to view colors or look at real roofs. Davis says replacing his roof cost about $7,800 and took three days, despite several levels of roof rather than a single, standard shape and structure, and Yankee gutters that are built into and attached to the house and require changing the roof to repair.

"Make sure the contractor has a separate service department," said Brett, who added his company did more than 600 roofs and $18 million in business in 2019.

As many Long Islanders spend more time at home and outdoors, decks are becoming more than a detail.

"It’s one way to enlarge your living space," said Louis Pagnutti, owner of Decks Unique with a showroom in Commack. "You have an outside room."

Most decks today use composite material, which is easier to maintain than wood. An experienced deck builder typically helps with design.

Some people divide decks into levels, creating sections that can lead to smaller, crowded spaces.

Decks can be done in multiple colors, with decks and railings in different colors or a "picture frame" design with the deck in one color and the border in another.

New decks typically need town permits, which could depend on their height from the ground, and taxes could rise.

Plumbing: A matter of depth

"They focus on what’s visual," he said. "When somebody wants to spend more on a chair than to ensure the life of their plumbing, I identify that as a problem."

Plumbing is part of other renovations, such as kitchens and bathrooms. Plumbing companies should be licensed, insured and, ideally, certified by the company whose products they use, providing training and, potentially, better guarantees, Cartelli says.

Work should comply with state and local plumbing codes, such as those of towns, Cartelli says.

A lot of new construction includes valve manifolds, so each fixture off the main line has a dedicated water line that can be shut down individually. "You could do that when you renovate," Cartelli said.

Installing new plumbing can cost up to $65,000 for an entire house, including bathrooms, kitchen and heating, depending on the size of the home, he says.

But regular upkeep is vital.

"It’s like brakes on a car, an oil change," he said. "You have to have preventive maintenance."