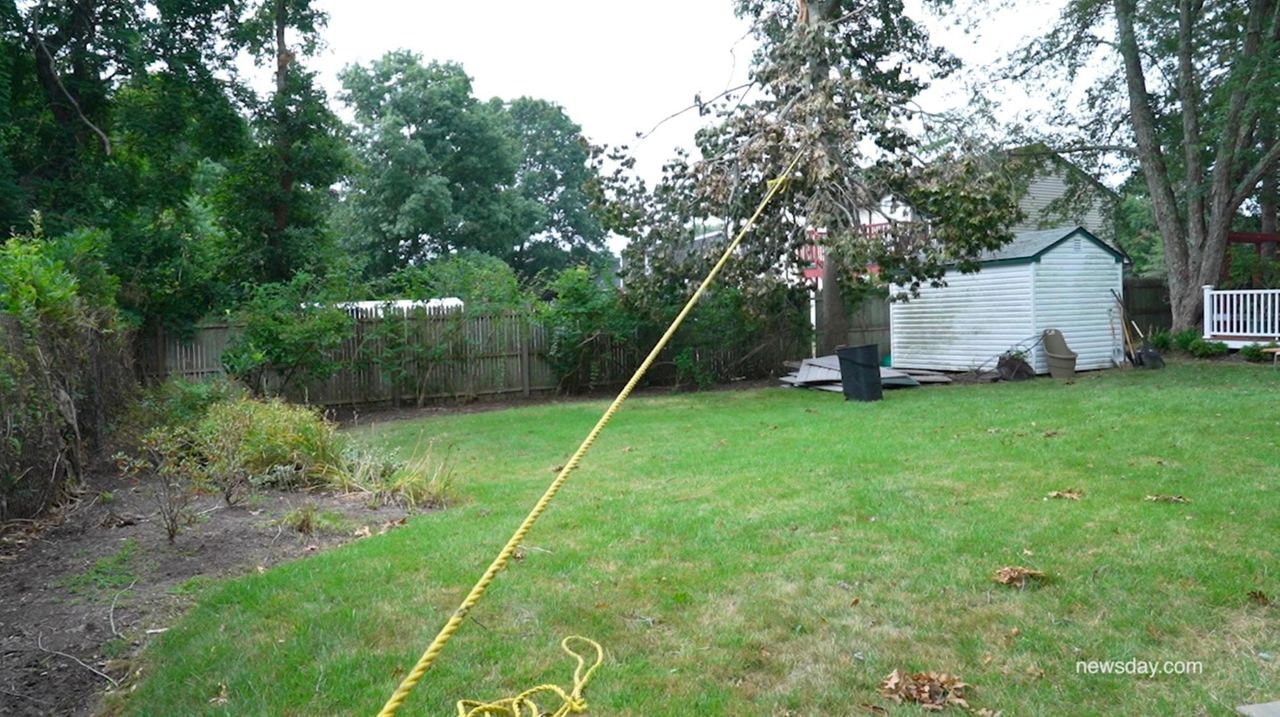 Jack Rosebery, owner of Rosebery Architectural Studio in West Sayville, offers some tips on how to protect your home from storm damage, after he lost a shed in Tropical Storm Isaias. Credit: Randee Daddona

Jack Rosebery wanted to be as prepared as he could.

The day before Tropical Storm Isaias hit Long Island, Rosebery hired a landscaper to do some trimming and take down a small, dead tree in the backyard of his Medford home.

He also tried to get trimming companies to remove overhanging branches — something he had been trying to get done for weeks.

“I cleaned up,” said Rosebery, an architect and owner of Rosebery Architectural Studio in West Sayville. “I got everything in pretty good shape beforehand.”

Then Isaias hit, felling the top half of an oak that crushed an 8-by-8-foot shed, littering the property with debris from the toppled tree.

“It could have been worse,” said Rosebery, who has helped others after storms, including Sandy. “The tree could have fallen on the other side of the yard where my new fence is.”

Isaias’ winds are gone, but the tropical storm has left a trail of damage to homes in the region still early in the Atlantic hurricane season, which runs from June 1 to Nov. 30.

As residents rebuild from one storm, experts say there are things homeowners can do to better prepare for the next Big One — but you'd be better off assigning some of the work to professionals.

“Keep safety in mind,” said Ben Jackson, owner of Ben’s General Contracting in Freeport. “There are hazards with storms and preparing for them.”

Here are some ways you can prepare:

Many Long Island homes are close to trees, which could be problematic amid high winds. Tree-trimming companies can identify and remedy potential hazards.

Homeowners ideally should look for an arborist certified by the International Society of Arboriculture, headquartered in Atlanta, Georgia, says Kevin Sheehan, Hicksville-based Long Island district manager for The Davey Tree Expert Co. of Ohio. Have them check your trees every few years, which Sheehan says most will do for free.

“A tree is a hazard if it has a target, such as a home or a car, pedestrians or other structures,” he said. “Those are the trees you should be most concerned with.”

Trim trees close to your house, although there is no exact footage, but not more than 20%, since the tree “feeds itself through leaves,” he said. Remove dead and rotted branches.

“Even the strongest and healthiest tree couldn’t withstand the winds we had,” Sheehan said. “It helps if the tree’s thinned out. There’s more wind flow. A dense tree can act like a sail.”

Possible signs that you should remove a tree include cavities in the trunk, decay-producing fungi such as mushroom, chipped or peeling bark and dead or hanging branches.

A visual inspection from the ground or a cellphone camera’s zoom lens sometimes can reveal problems, and no resident should take risks when it comes to their roof. A roofing installer can inspect a roof, although drones also can identify missing shingles,

Make sure siding isn’t loose and have damaged or missing shingles replaced. Make sure shingles are nailed down properly with correct work on the edges, so they don’t unzip in the wind, says Anne Cope, chief engineer at the Insurance Institute for Business & Home Safety, a Tampa., Florida-based nonprofit scientific research organization funded by the property insurance and reinsurance industry.

An inspection from the attic can determine whether wood underneath the roof is fastened properly. Bracing a roof’s side walls with two-by-fours and hurricane straps to fasten the roof to walls can provide additional protection, according to the Federal Emergency Management Agency.

Make sure gutters are clean, so they don’t overflow and cause problems, and repair dangling gutters. “Keep the trees away from the house,” Jackson said. “It’s leaves that typically go in there.”

Putting thicker brackets, the runners used for wheels, on garages can reinforce them against wind, says Christina Shaw, an Allstate agent in Wantagh. Residents also may want to make sure the garage door is well sealed, without a gap at the bottom.

You can also get hardware to brace the back of the door, per an option noted by FEMA. And a garage door inspection can indicate if it’s time to get a new door.

Make sure all your windows and doors are closed and locked before a storm, Rosebery says. Check doors’ weather stripping. Wind can find its way in through even small openings.

Impact-resistant windows can make windows stronger. While it’s possible to get hurricane-proof glass designed to be hit by projectiles and not break, Jackson cautions about a potential downside. “If you have a fire, firemen could have trouble breaking the glass to get in,” Jackson said.

You can cut and secure plywood with screws around your window frame to protect windows from storms.

Steel storm shutters, standard in states such as Florida, can be used for storms and to close vacant homes as well, but can be costly.

Surge protectors on computers, TVs and other devices, battery backup and backup generators can protect you temporarily from power loss. “You should also have them on your routers,” Rosebery, the architect, said.

Surge protectors also are available for the whole house, providing an added layer of protection.

But are they fail-safe?

Rosebery says surge protectors, which often include USB chargers, have limits on what they can protect. They are rated in joules — the higher the joule rating the more the surge the protector can guard against.

“Most failures are from people putting too many things on the surge protector when it does not have a high enough rating to handle it,” he said.

And it’s possible to get small battery backups for computers, routers and other essential electronics lasting from hours to days. And bigger, backup generators can provide more power for the house, Rosebery says.

Jackson described someone whose backup generator didn’t work during superstorm Sandy, when natural gas was shut off. Dual-fuel generators offer a second-fuel option.

Permanently mounted backup generators automatically kick in when you lose power, but you should test them periodically, ideally every 30 days, Rosebery says.

Unplug electrical devices such as computers and TVs that don’t have surge protectors. If you are concerned about flooding, place electronic devices on elevated surfaces, Shaw says.

Water damage could be a huge problem from a storm and heavy rain. Improper grading around the foundation of a house can lead to leaks and flooding, Rosebery says. But care should be used not to pitch the soil too high at the house, he adds. Soil piled too high near the house can make a natural entry point for carpenter ants and termites, he says.

If water puddles around the foundation, you may have a problem with the pitch of the soil. Topsoil can be piled and pitched away, even measured with a level to make sure it’s slanting away from the house.

“It’s probably one of the simplest things,” Jackson said. “But if you don’t know about it, you won’t pick up on it.”

This is something you might be able to do yourself or with the help of others, although you should still be careful, Rosebery says.

Airborne branches can damage a home, but so can potted plants, stray tools, lawn furniture and toys swatted by the wind. Bring them inside before a storm. You may want to put trash cans in the garage or otherwise secure them.

Check your fence to make sure it’s firmly grounded and doesn’t have loose planks. Detached structures, such as sheds with no permanent foundation, can be a risk with storm winds.

“A lot of our customers’ detached structures came up and blew to the other side of yard,” Shaw said. “That’s coverable, but you can prevent it by anchoring it down.”

“Insurance is your first line of defense, whether it’s an earthquake, tornado, hurricane, any emergency or natural disaster,” said Don Caetano, a spokesman for FEMA Region 2, which includes New York, New Jersey, Puerto Rico and the Virgin Islands. “Insurance has to be in your tool kit of things to protect your home should another Isaias, Sandy or Irene occur.”

Understand your homeowner’s policy and deductibles and be aware of how fallen trees are covered — or not, Shaw says.

Thousands of trees tumbled onto yards, but that doesn’t mean insurance will help in every case. If a tree falls without damaging a structure, a homeowner’s insurance may not cover costs.

If a tree falls on a car, even if that car is on the homeowner’s property, it could be covered by comprehensive car insurance.

If a tree falls on a house, homeowner insurance typically covers ancillary expenses such as food spoilage as well. If the only claim is food spoilage, the limit may be less than the deductible, so insurance might not kick in.

If there is negligence, the neighbor’s policy could be required to cover it. “You would have to document you put your neighbor on notice that the tree is dead and they didn’t do anything about it,” Shaw said.

A homeowner could send a letter to a neighbor through certified mail, but neighbors sometimes team up to cover costs.

Tenants may tap renter’s insurance to protect their assets — even if they're living outside flood zones.

FEMA’s Caetano said the “preparedness piece” should include emergency evacuation plans and materials on hand.

Have a bag or a “go kit” with necessities to grab at a moment’s notice, in case you have to stay with a relative, friend, in a hotel or shelter.

Evacuation plans include when and how to leave home and where you’ll go, to a neighbor’s, relative’s, friend’s, shelter or hotel, if you must evacuate due to a storm or other disaster.

Have necessary items on hand, such as batteries, water, medicine and nonperishable food. “A lot of my neighbors are without power,” Caetano said about the recent storm. “They lost a lot of their food, because it was refrigerated. Have food that’s not perishable.”

Insurance may not cover it all

While some Long Islanders hit by Isaias waited out the power blackout in their homes, others moved out temporarily — and insurance picked up some or all of the expenses of those who had policies to cover such situations.

What’s known as “loss of use” or “additional living expense” insurance typically kicks in, if you have to move out of your residence due to damage, according to Christina Shaw, an Allstate agent in Wantagh.

If a tree slices open your home, you may still have to make your mortgage payments even if you can’t stay there, Shaw said.

But loss of use or additional living expense insurance could pay for you to live elsewhere, renting a home or in an extended stay hotel and eating out, she noted.

“That’s a coverage that I think is worth highlighting and making sure people look at,” Shaw said.

The coverage typically is capped in dollars, but sometimes it is measured in time.

“I’m seeing a lot of that,” Shaw said of people filing claims under this policy, “people being in hotels or extended stay, because their house is open from a tree being on it.”

Even if you have this coverage, you may want to review it to make sure it’s substantial, she says.

FEMA tips on preparation for emergencies