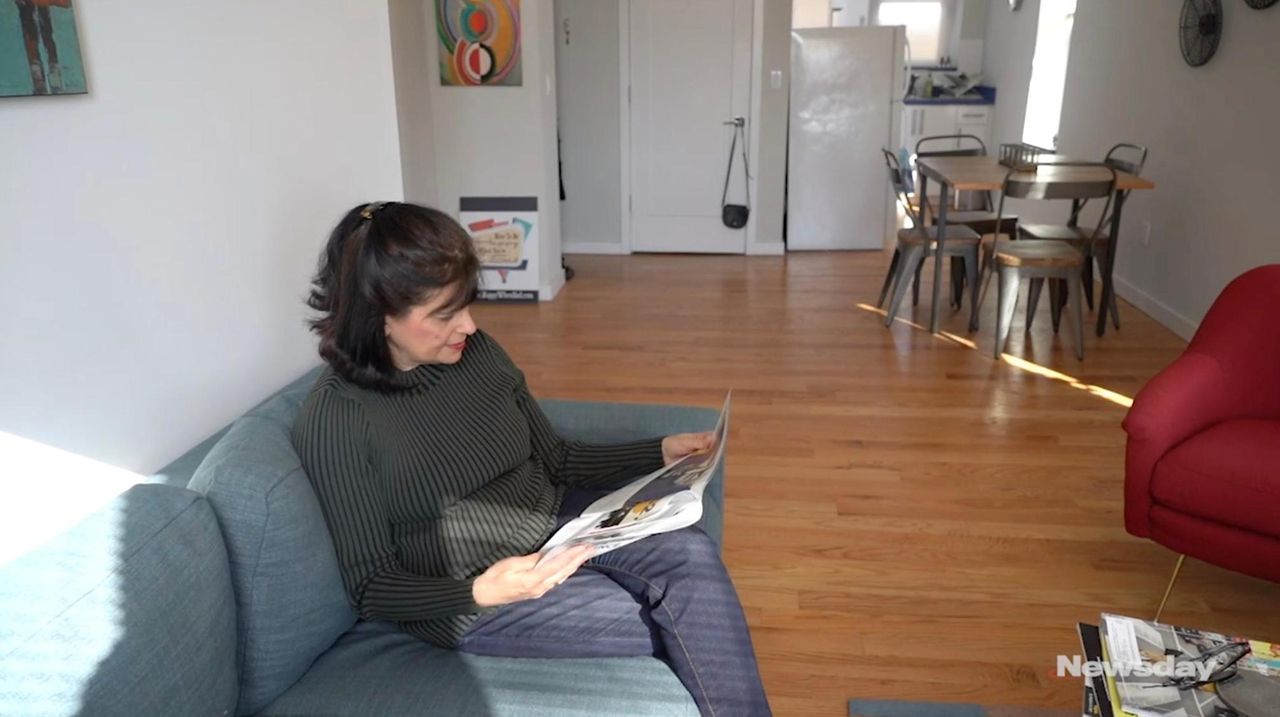 Jane Fisher, of Long Beach, talks about renting an apartment rather than own a home.  Credit: Debbie Egan-Chin

Wendy Sanders and her next-door neighbors are friendly — and the coronavirus isn’t going to change that.

Under shelter-in-place orders, renters in a Roslyn building may have to make do with smaller quarters than homeowners in roomy houses with yards, but they do enjoy a few advantages.

Sanders and her second-floor buddies in the Roslyn Lumber Yard — two stories of apartments in a main building over retail space — never stopped interacting, even when six feet apart.

“We can open our doors and chat…I make a banana bread, and I knock on my neighbor’s door and leave it and go,” says the 50-year-old agent with Douglas Elliman.

While there may be some sidestepping in hallways to keep a safe distance, and a trip to the Laundromat means wearing masks and gloves — and not going in until someone else comes out — living in tight spaces does take some maneuvering.

Luckily, there are more ways than the building’s elevator to get to Sanders’ apartment, including stairways. The doors in the newly constructed building open with Key Fob, an app, so there are fewer things to touch. A part of Sanders’ living area has been converted into a makeshift gym, where one person — she has three teenagers at home with her — can work out at a time.

“We know to stay safe and to respect each other,” she says.

Sanders is among a fifth of Long Islanders who have been renting, either by choice or compulsion.

While many tenants are saving to buy a house, some are motivated by reasons other than financial: They say it's easier to rent than spend time and money on maintenance. Others like the geographical mobility to move for a new job. Still others are in it for the perks of luxury apartment living that owning a home wouldn’t offer.

Cindy Shelley, 61, had owned three homes in her lifetime and got tired of all the maintenance and upkeep. She gave it up to rent a bungalow in Bayville, some 30 feet from a private beach. Now that she is self-isolating, she is happy to be there, she says.

“I don’t feel isolated,” she says. “I can go to the beach with my dog, and I can look out the window and see if it’s a good time to go out.”

The small community of 20 homes is a close-knit group, she says, and there is plenty of neighborly help among them. The neighborhood lost two people to the coronavirus, both older with underlying health conditions, Shelley says. A freelance floral designer, she made bouquets for their families. When her next-door neighbor got stuck in his Texas winter home, Shelley says she FaceTimed with him so he could see his yard was in good shape.

Linda Faraldo, of Daniel Gale Sotheby’s International Realty, who sold Shelley’s house and secured her the rental, says she has seen an increase in both the supply and demand of rentals over her 22 years in the business.

“You read articles that renters today are mostly millennials that don’t want to buy a house, but that’s not the case,” she says. “It’s every age. It’s all over the map. Renting is a personal decision.”

The pandemic, she says, has slowed down sales, but there is still renting via virtual tours. And there are many ready to move out of the New York City area, Faraldo adds.

Frank DeLucia of Century 21 American Homes says although he sells houses and condos in Long Beach, he gets quite a few renters.

“People who don’t know the area want to come into the area and check it out, so renting gets them that,” he says. “You’re getting the lifestyle of Long Beach whether you rent or buy.”

However, rentals now  —  much like home sales — are way down, he says, as much as 90% since the pandemic began. As with all sales and rentals, the stay-at-home order from the state means brokers can’t show homes. So, it is up to virtual showings or homeowners who oblige. Even if an apartment is vacant, prospective renters have to sign a “hold-harmless” agreement, protecting the broker or landlord against legal action by the home viewer for any damages, DeLucia says.

“Landlords are understanding,” he says. “After all, they are losing months of rent.”

Brokers and landlords are not the only ones dealing with the slowdown.

With a usual daily run of eight trucks serving the East Coast, Robert Falvo, president of Long Island Moving and Storage Inc., says his company reopened recently and is down to running two trucks a day, if that.

"If you don't have to move right now, I say just wait a week or two," Falvo says. "But if someone has to move, I'll help the people who need it." He and his son, Robby Falvo, who also works at the company, notice that renters have an edge right now, because it's easier to break a lease than sell a house.

David Lofton doesn't plan to go anywhere. A senior citizen living in the 251 Jackson St. apartment complex in Hempstead Village and president of the Madison Monroe Tenants Association, he says he plans his outings more carefully, including trips to the supermarket.

“My wife and I go down to Eisenhower Park early in the morning, around 7 a.m., but otherwise we stay in,” he says. When leaving the apartment, for the laundry room for instance, he dons his mask and gloves. If he sees someone in the room, he will wait until they are gone.

Good, according to one local expert.

With COVID-19 affecting every aspect of people’s lives, it’s important to consider the specifics of your living condition, says Dr. Sharon Nachman, chief of the Division of Pediatric Infectious Diseases at Stony Brook Children’s Hospital.

Population density is the most important thing to consider when taking precautions in your home, whether it’s a 200-unit apartment building, a 10-unit condo building, a two-family house or a single-family house, she says.

Jane Fisher is coping with the challenge in her own way.

After moving from her home in Freeport to a rented apartment in Long Beach recently, she embraced the change. Then came the coronavirus and the need to self-isolate. But she's finding ways to make it work.

“I haven’t had a meal with anyone else in the last month,” says Fisher, an employment manager with the Hempstead School District. “You would think that would be a recipe for disaster.”

Instead, she chooses to be happy, she says. Unable to ride her bike on the now-closed boardwalk, she has taken to walking the neighborhood. She also tunes in to remote exercise classes online, and cooks for friends two or three days a week. She even has a website that reflects her thinking, happywhensad.com.

“I’m not happy to be renting. I miss my house, but you have a choice when you are confronted with a situation. And I’m fine.”

Renting vs. owning over the years

Pros and cons of renting

Little or no maintenance

Can afford to live near mass transit/downtown, waterfront

No equity in a house

Subject to restrictions of a lease

Landlord/superintendent may not be responsive to issues

Landlord can opt not to renew lease