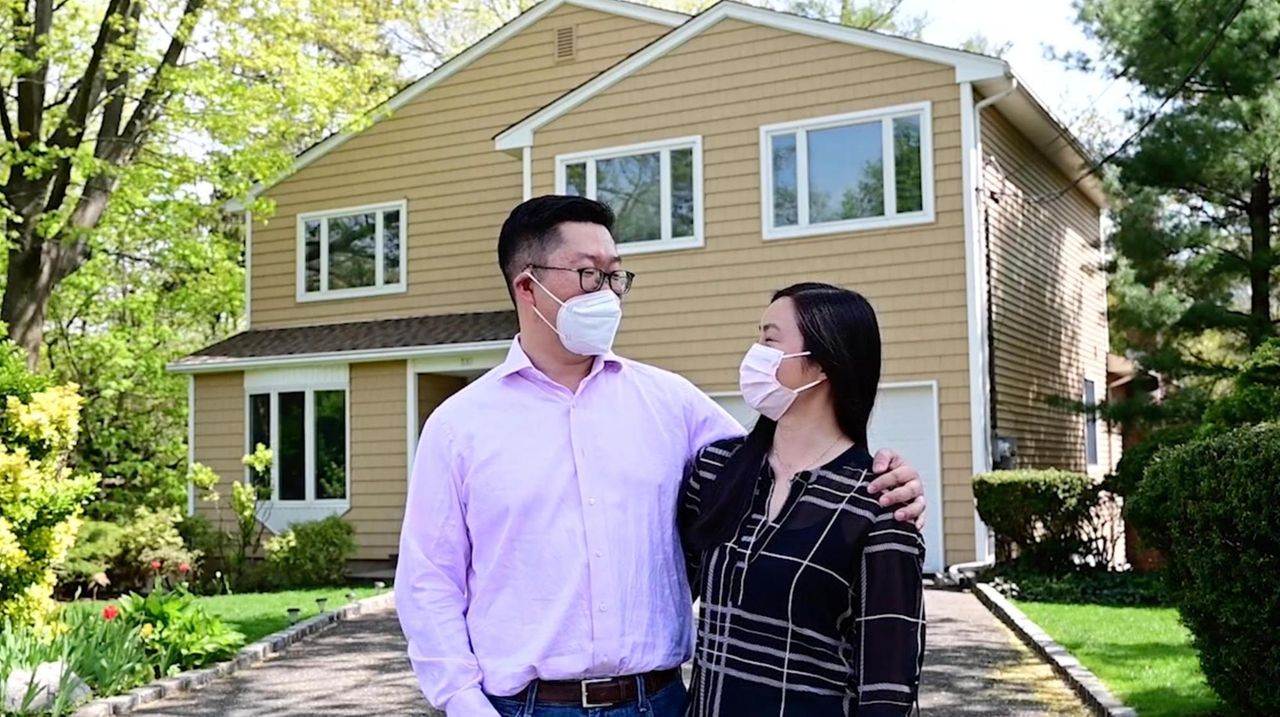 Mark Zhang and his wife, Diana Auyeung, have moved to Port Washington from New York City. They were used to walking in the city and have settled in Port Washington because of the walkable main streets and downtown. Credit: Newsday / Thomas A. Ferrara

When Diana Auyeung was growing up in Hong Kong, she visited relatives in East Meadow every summer, getting to know such Long Island attractions as Jones Beach and the dim sum at the Fortune Wheel Chinese restaurant in Levittown — before returning home for school in the fall.

Despite those warm memories, the idea of a permanent move to Long Island last year had Auyeung — now 35, married and working as an accountant — wondering whether leaving her midtown Manhattan apartment near Grand Central Station was a step in the right direction.

"I’ve lived in big cities all my life," says Auyeung, who met her husband, Mark Zhang, 39, an investment banker, while they were both studying in Lehigh University near downtown Bethlehem, Pennsylvania.

With a 4-year-old daughter driving a need for more space, the couple eventually made the transition with assistance from The Suburban Jungle Group, a Manhattan-based real estate firm that offers a free service for people looking to relocate to the suburbs. The firm connected the couple with Frances Lisner, a licensed real estate salesperson with Daniel Gale Sotheby’s International Realty in Manhasset and Port Washington. Lisner helped them lease a Manorhaven home for a year and also brokered their impending purchase of a four-bedroom Colonial near the Port Washington Long Island Rail Road station.

Despite her earlier reservations, Auyeung is enjoying discovering Port Washington, which she says "is not at all like in the country, where you’re just surrounded by trees."

As the urban exodus to Long Island continues this spring, many city dwellers are finding the best of both worlds in homes and apartments in or near Long Island’s walkable downtowns. They’re learning that moving to the suburbs won’t necessarily turn them into social hermits or force them to drive to the local coffee shop, real estate experts say.

"One of the concerns is that they are going to lose their social life," Lisner said of these homebuyers. "A big request from [New York City] buyers is, ‘this isn’t going to be too rural, is it?"

Eric Alexander, director of Vision Long Island, a Northport-based nonprofit planning organization, said the desire for walkable towns here is "nothing new. There’s been a two-decade-long effort by over 50 downtowns [on Long Island] to improve walkability and approve projects and I think all the pieces are coming together as we recover from the coronavirus."

Alexander said recent surveys show that "around 50%" of Long Islanders want to work or live in walkable downtowns, an increase from one-third 20 years ago. He added, "Now there’s an additional need [for walkable downtowns] because of because of demographic changes and the New York City exodus of folks who want those experiences."

Walking and biking can improve social and mental health, and "support Main Streets through 'shop local' initiatives that help small businesses who have been hurt from coronavirus regulations and downtowns featured as local tourism destinations and staycations," Alexander said.

"For us, convenience is key — being able to walk to everything be it coffee or a slice," said Meg Gaber, 32, senior account director at a digital marketing and advertising firm. Gaber and her husband David, 34, co-founder and managing partner of an executive recruitment firm in Manhattan and Melville, have been living for the past five years in an apartment above a Starbucks in Hoboken, New Jersey, a community that she says is "literally a square mile, so you can walk anywhere." But with a 2-year-old son and a newborn, they have been searching since December to move out into a house on Long Island with more living space, including a backyard, near a traditional downtown.

"The main things for us are top schools, top sports programs, a short commute to the city and walkability, so Garden City checks all the boxes," said Gaber, who grew up in Garden City and whose parents still live there. (David grew up in suburban Suffern, New York.) They’re also house-hunting in Manhasset and Cold Spring Harbor.

Help with the move

According to Allison Bernstein, founder of Suburban Jungle, 500 towns are within commuting distance of New York City. The company helps urbanites to "develop a home search strategy" to "look at every possible town they can move to across the tristate area," Bernstein said.

More help is available from Redfin and Walk Score, which rate walkability on a scale of 1 to 100, based on proximity to amenities such as public transportation, neighborhood schools and shops.

Here are Long Island communities that either boast walkable Main Streets or are taking steps to revitalize their downtowns.

To promote the downtown’s walkability, a local environmental group is posting signs around Main Street to "encourage people to walk to stores and activities by showing them how few minutes it actually takes to walk to their destination," said Bobbie Polay, executive director of the Port Washington Chamber of Commerce. A recent "face lift" replaced trees, sidewalks and the drainage system near the Port Washington Long Island Rail Road station. Main Street, which winds for a mile from Port Washington Boulevard to the Town Dock on Manhasset Bay, contains about 170 businesses within walking distance of local homes. Just beyond Main Street’s intersection with Shore Road, Town Dock Park is open until sunset for strolling or fishing from a pier on Manhasset Bay. Although a walk score isn’t available for Port Washington itself, The Landmark on Main Street, a local cultural institution at 232 Main, rates very walkable (87 out of 100) and somewhat bikeable (46) by walkscore.com.

The South Shore village is best known for its Nautical Mile, the waterfront strip on Woodcleft Avenue where a Hilton Garden Inn will be constructed on the former site of The Schooner restaurant destroyed by 2012’s superstorm Sandy, Mayor Robert Kennedy said. The historic waterfront promenade known for its sea-to-table restaurants and pleasure boating is within a half-mile of 1,000 housing units including single-family homes, co-ops, condos and apartment houses, Kennedy said.

The community actually boasts two downtowns, said Kennedy’s wife, Mary Kennedy, a licensed Realtor at Coach Real Estate in Rockville Centre. "An influx of people coming from Brooklyn, Queens and Manhattan due to COVID-19" are resettling around Freeport’s Main Street, with its mix of ethnic eateries, nightclubs and mom-and-pop retailers, she said. "We’re getting a lot of requests from people coming out here because of the diversity." Freeport apartment rentals start at $2,000 a month, she said.

The project is being helped along with a $10 million grant from New York State, $1.1 million in federal funds for downtown revitalization and $150,000 from Nassau County for improvements along Broadway. The redevelopment project is expected to include "500 new housing opportunities, restaurants, shops and office space," said town spokeswoman Marta Kane.

Tourists and residents alike stroll the city’s historic 2.2-mile boardwalk on the Atlantic Ocean. Wide bike lanes are marked down the middle of the multi-use boardwalk, rebuilt after superstorm Sandy.

But if you settle in Long Beach, you’ll find the rest of its 3.5 square miles are equally walkable, said John McNally, city public information officer. McNally said that the shops and restaurants on Park Avenue, the main commercial drag, and in the smaller shopping district on the West End of town, are "within walking distance of just about every home in the city." Long Beach’s West End neighborhood boasts a street closed to vehicular traffic where residents can stroll, ride bikes or walk their pet. Long Beach city buses, which include open-air trolleys in summer months, run on a West End route on West Park Avenue and West Beech Street and an East End loop along East Park Avenue and Shore Road.

Adding to the urban ambiance, more than 40% of the city’s "housing stock is rental, which is more akin to New York City," said McNally, who has lived in Long Beach for two decades.

The 3.25-square-mile village offers single-family homes, townhouses, condominiums and apartments, according to its website. Rockville Centre boasts its own police department, a Long Island Rail Road station and, as the seat of the Roman Catholic Diocese of Rockville Centre, a Gothic cathedral rivaling St. Patrick’s in Manhattan. The downtown area around Merrick Road and Sunrise Highway buzzes with restaurants, pubs and independent retailers.

Luis Ramos Gomez, 43, a cab driver, recently moved into a four-bedroom Rockville Centre single-family home about a mile from downtown. The family had previously lived for eight years in a two-bedroom apartment in Middle Village, Queens.

"The kids were growing up and they need more space, and there are better schools here," said Gomez, who is married and has two children. Another reason for the move was to escape annual increases that drove his city rent from $1,300 to $2,000, he said. In Queens, Gomez added, "we spent a lot of time looking for a parking space. Now we have our own garage."

In the past decade the former mill town, waterfront resort and regional retail center has emerged as a magnet for millennial transplants from the city, said David Kennedy, executive director of the Greater Patchogue Chamber of Commerce. It’s "one of a very few communities that has seen their age demographic track younger, while the overall Long Island trend has been growing older," Kennedy said.

Among the residential real estate developments attracting millennials: New Village, a 291-unit luxury apartment complex with office and retail space developed by TRITEC on the former site of Swezey’s department store. Although Patchogue isn't rated by Walk Score, New Village's score is 84, because, according to walkscore.com, it is "surrounded by vibrant restaurants, shops and entertainment ... a few blocks from the Long Island Rail Road station" and the ferry to Fire Island. Patchogue is participating in Suffolk County’s first bike-sharing program, modeled after Citi Bike in New York City. Bicyclists can use an app to rent a bike from a rack at the Patchogue Long Island Rail Road station and the Blue Point Brewery downtown.

"Patchogue is the perfect stop in between the young city life and settling down and starting a family," said Colavito, who said he is looking to buy a house on the North Shore, preferably in Northport.

Ronkonkoma has "a downtown, but it’s sort of struggling," said Christopher Kelly, vice president of marketing for TRITEC real estate in East Setauket.

"The Ronkonkoma Downtown has some great events like their St. Patrick’s Day parade and Ronkonkoma Day but it lacks cohesion and defining characteristics," said Christopher Kelly. "We hope the addition of our project Station Square can help create an energy and vibrancy to all of Hawkins Avenue."

Robert Kent, TRITEC’s senior vice president of development and a board member of The Real Estate Institute at Stony Brook University, said that developing new walkable Long Island downtown spaces like the Hub will offer "better health through increased physical activity," less traffic congestion on local streets and a boost for the local economy.

Walk Score, a Redfin company, measures the walkability of addresses throughout the United States. New York City, with a walk score of 88, ranks first in the state.

Here are some Long Island communities’ scores based on the proximity of residential areas to amenities such as parks, groceries and other shopping places, drinking and dining spots, cultural attractions and schools:

Freeport teen who won vaccine scholarship welcomes the boost
2:15
De Blasio rolls out plan to address racial inqualities in education
Former Head of Harbor judge resigns amid misconduct allegations
Best: The Isles want to keep winning. The Coliseum already has.
Husband-and-wife LIRR conductors stole wages, MTA internal watchdog says
Teacher who 'never did anything by halves' dies at 87
Didn’t find what you were looking for?