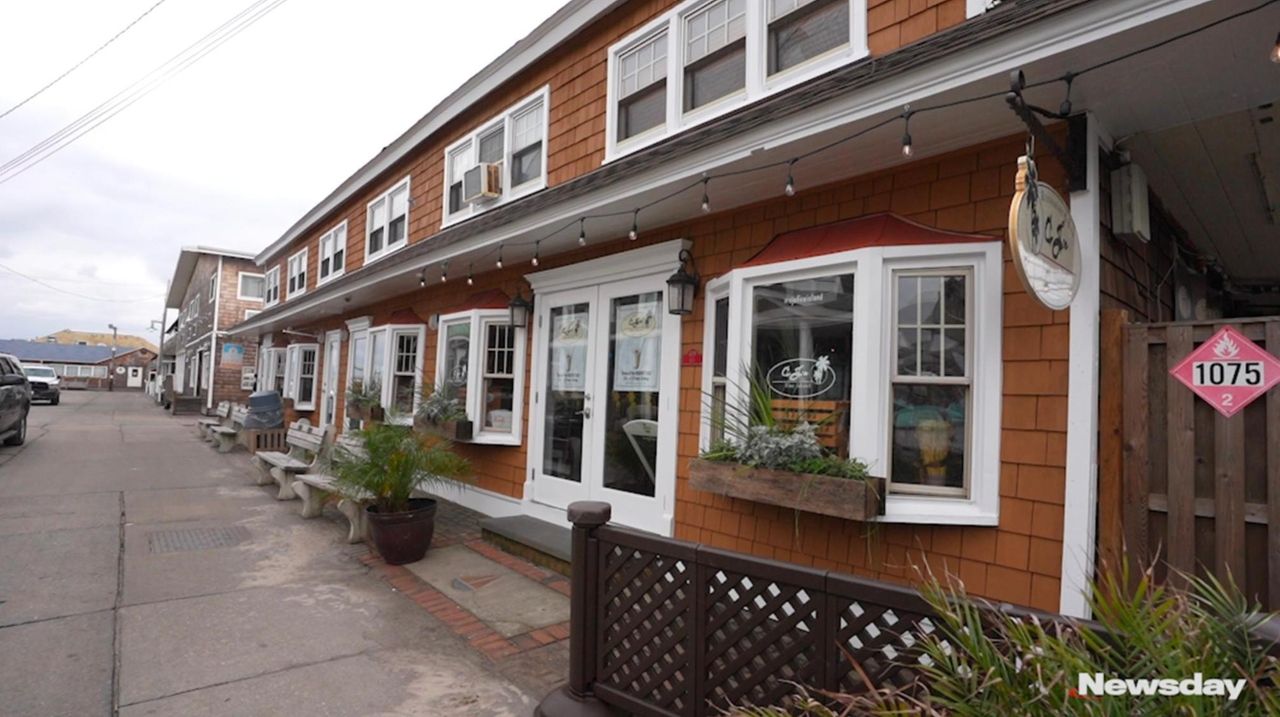 For many Long Islanders Fire Island is a summer getaway, but for some it is their year-round residence. Newsday spoke to those who call the Island home all year round and what life is like after the summer crowds leave.    Credit: Randee Daddona

Brendan Reynolds summered for a decade on Fire Island before giving in to his love for the sea. He moved into Lonelyville, an idyllic beach community on the western end.

"It was very nice not to have to lock your doors and be able to sleep with windows open and hear the ocean," says Reynolds, 46, about his decision to settle on the Island 25 years ago.

Byron Chenault and his family, too, went from spending summers on Fire Island to moving into their Ocean Beach vacation home four years ago.

"You can walk along the beach for miles and hardly see a soul," says Chenault, 40, who is among about 300 die-hards who live on the 32-mile barrier island all year round.

The lifestyle comes with a price. Residents are barred from driving during the high season, when the population swells to about 15,000. Driving permits are hard to come by. Permanent residents are used to rugged living, with four-wheel drive vehicles and boats.

Shifting to the nondriving season can be disorienting, Reynolds says.

"That’s probably the hardest thing when you’re working, raising a family and trying to commute on and off the island, and all of a sudden, the restrictions come in in the springtime," he says.

Offseason facilities are scant. "The few supermarkets are not open. The ferries run a skeleton schedule. So, you really have to plan," says Reynolds, who heads the Fair Harbor Fire Department and has a landscaping business.

But Fire Island’s year-rounders wouldn’t have it any other way.

The winters are tranquil and each season brings a different feel, Chenault says.

Sure, things have changed with the coronavirus pandemic, but people have taken it all in stride.

Usually, every summer, tens of thousands of vacationers flock to the island, move in to their holiday homes and, after the season is over, head back to their lives in the fall.

Last year, the influx started early in spring, when the lockdown began, with people fleeing crowded cities. Many wound up buying properties on Fire Island. Some stayed longer in their holiday homes.

"March and April felt like the summertime here," says Judi Phelan, of Kismet. "There were so many people walking around. It was a pretty busy summer here."

Fire Island vignettes on Dec. 2, 2020: Clockwise from top left: The beach in Kismet; 3-year-old Kai Chenault rides his bike as his sister, Kailah, 5, follows behind near their home in Ocean Beach; a sign for the Kismet community; and houses in Ocean Beach. (Photos by Randee Daddona)

Anecdotally, there may be more people on the island.

"It’s definitely more lit up at night," Reynolds says. "If you drive on the beach, it’s surprising how many houses have lights on, even in November, December that normally would have been dark."

In the daytime, there are more people walking around, he says, adding that many people quickly winterized their homes so that they could remain in them this winter. "There are houses that are typically not occupied that have people in it this winter," he says.

"It’s just become the new normal for most folks," Reynolds says about the year-rounders.

Some residents feared summer visitors would spread the virus. That didn’t happen. Fire Island has a total of seven COVID-19 cases, according to Suffolk County data. "Shockingly, we were incredibly low," Reynolds says.

The Chenaults have dug in for the long haul. "My kids love it here!" Byron Chenault exclaims. Their three children have about a dozen friends close in age.

"They have a nice little crew and they enjoy the quiet offseason, but it’s not as isolated as it probably once was," Chenault says. "And the school out here is phenomenal," he says about the island’s only school, the Woodhull School, which goes up to sixth grade.

Children on Fire Island spend a lot of time outdoors, enjoying the beach, marine life and the Sunken Forest. The Chenaults still venture to the mainland to enjoy the aquarium and other activities and amenities not available on the island.

It wasn’t easy for the family, at first. During their first winter, several pipes in their home broke, which meant no running water and other problems.

"People gave us a heads-up about what to do and we thought we were ready, but we learned that winter that we had a little more work to do," says Chenault, who is secretary to the Fire Island Year Round Residents Association, a group of about 180 islandwide members that meets quarterly to discuss local issues.

Judi Phelan had a learning curve too. When she married Rusty 36 years ago and moved into his Kismet home, Judi wasn’t well versed in Fire Island living.

"In the summertime we’re not allowed to drive, so that was a big adjustment for me," says Judi, 59. That was tough on her teenage daughters. "It was hard to tell them they couldn’t go off and see their friends." Their daughter, Kiley, 32, recently got a job in New York City and moved back home.

In the winter, Kismet has no ferry service for the 30 families who occupy a few of the 200 homes year-round and must live there for a year before they can get a permit to drive on the island. Often, they have to wait longer. The Fire Island National Seashore, which administers the permits, allows only 145 permits islandwide. So an applicant has to wait until someone gives up a permit, which is unlikely, or moves off the island or stops driving, or dies. "One of my neighbors waited five years to get a driving permit," Judi says.

When ferry service ends, year-rounders with permits can drive either on the beach — 4-wheel drive is a must — or on sidewalks, which double as roadways.

To decamp from Kismet during the summer, Judi, Rusty, 74, and their daughter use their boat to shop, keep appointments and for other necessities. "Our town does have a small market, but it doesn’t have everything," Judi says.

Travis D’Arienzo, who bought the Mermaid Market in Ocean Beach six years ago — the only market that serves the entire island, from Kismet to Point O’ Woods — says business picks up in mid-April and dies down by mid-September.

"Typically, after Columbus Day it’s just myself and CJ’s that’s open, which is a bar/restaurant, also located in Ocean Beach," says D’Arienzo, 30, of West Islip.

To protect the island from flooding and tidal surges, the Army Corps of Engineers has undertaken two major projects. One is almost complete, says James D’Ambrosio, a spokesman for the Army Corps. However, "Army Corps projects are designed to reduce, not eliminate, flood risks from severe storms," D’Ambrosio says.

Ocean Beach is the island’s largest community, with a full-time police force and EMTs.

The virus has hit the Woodhull School in Corneille Estates. A bus that seats 20 kids had to be limited to eight, forcing the school to hire two additional bus drivers, Fire Island School District Superintendent Loretta Ferraro says. The school has a total of 47 students, an increase of 16 over the previous year, Ferraro says, and some classes had to take in up to 13 children, which is close to capacity.

"We were lucky," Ferraro says. "We were able to easily adapt, but had we gotten many more it would have posed challenges for us."

Ocean Beach’s infrastructure has stood up so far, says Steven Brautigam, the village clerk/treasurer. "We just rebuilt the whole sewer plant, the water system, so those are all intact and there’s no pressure on that," Brautigam explains. "We just did it because it was old."

But 2020 was a rough year. Gearing up for spring and summer crowds during the pandemic had stressed the fire departments, Reynolds says. In Fair Harbor alone there were 50 to 60 more houses occupied in April than in a typical year, an increase of about 10%, he says.

"It was the stress of planning for your worst-case scenario that was really a burden to handle on everybody involved with EMS," Reynolds says. "And that goes for the whole island."

The island’s real estate market has been on fire, says Robin Citriniti, an agent for Netter Beach Estates. Inventory is low and the average sales prices increased by about 11% from 2019 to 2020.

"I attribute it to the low interest rates," she says. "I do believe COVID has something to do with it. I also feel that people were looking for a safer way to invest rather than the stock market. People do buy homes here as an investment, to rent."

Since the COVID outbreak, more people are looking to buy winterized homes and renters are staying out longer, she says.

"It certainly is more crowded: You see a lot more people here now than you normally do this time of year," Citriniti, who lives in Corneille Estates, said in the fall.

"I see a lot of construction," she says. "A lot of clearing of properties and very beautiful, new contemporary houses will be going up. That’s the trend."

Here are a few homes on the market in Fire Island:

Features: This wood-sided bungalow sits on a 0.16-acre lot in a 100-home community and offers 875 square feet of living space with an open floor plan, wood floors, high ceilings, updated kitchen with white cabinets and granite counters. Outside, there’s a large deck, built in hot tub, large outdoor shower and beach access. The house has electric heat and a wood-burning stove in the living room and Is not winterized.

Features: This 3,920-square-foot cedar-shingled home on a 0.09-acre lot is the second from the ocean and features hardwood floors, painted wood breadboard walls throughout, a wood-paneled sunroom with window seats, finished attic, wrap around cedar deck, updated AC and electric. The winterized house has electric heat.

Features: Known as "The Madison," this 2,200-square-foot home on a 0.21-acre lot has been run as a guesthouse, but can be used as a private home with the penthouse serving as the master suite. Renovated three years ago, the house has among other updates, a new hot tub and siding. The property, which has an in-ground pool, overlooks the bay from the roof deck. The house has natural gas heat and is not winterized.

Features: Located on Clam Pond Cove which leads into the Great South Bay, this 3,600-square-foot home on a 0.59-acre lot boasts two bayfront decks, custom details and casework throughout and is the only home on Fire Island that has a private beach, boat dock and pool. The house has two fireplaces and electric heat and is not winterized.

Population: 293 year-round, according to 2019 Census for Fire Island CDP, and about 14,840 at the peak season, about 60 times the year-round population, according to the Suffolk County Division of Planning and Environment.

Transit: Passenger vehicles are generally not allowed in most Fire Island communities with these exceptions:

Smith Point County Park and the Fire Island National Seashore in Shirley can be reached via the Smith Point Bridge by car.