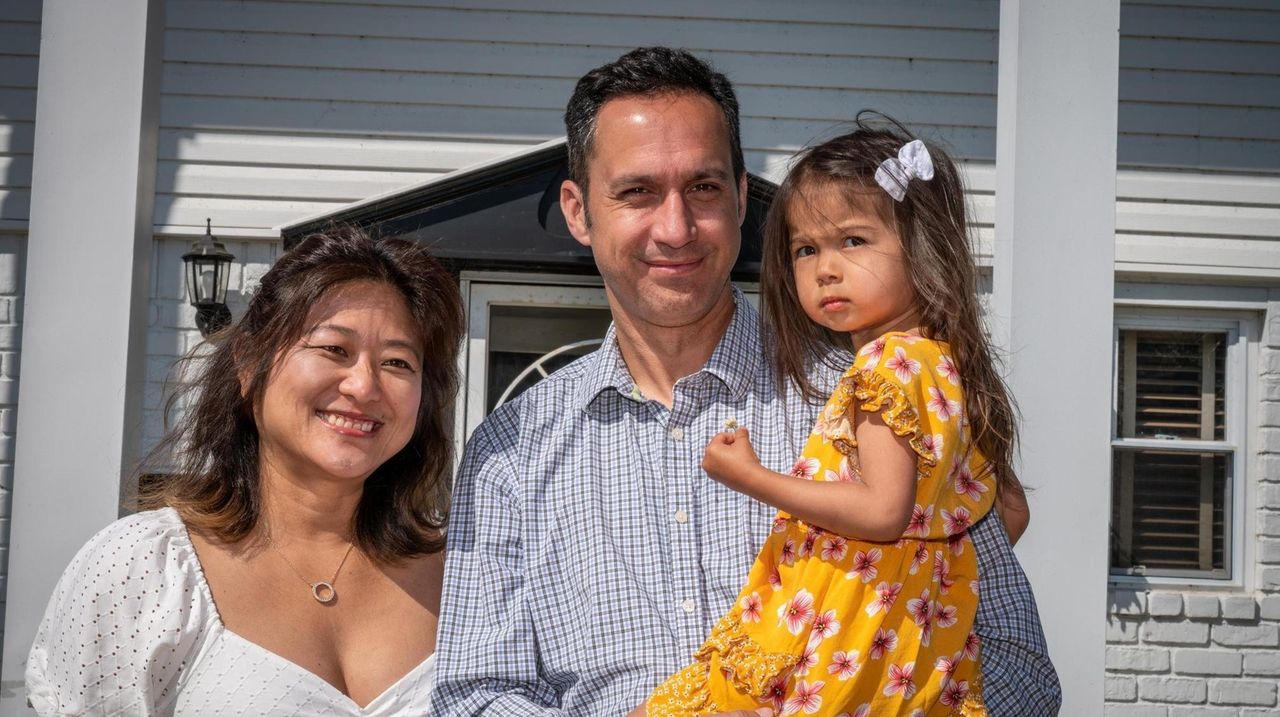 Fed up with the price wars over scarce properties, many are losing hope, and some are giving up looking for a home. Risa Matsuki of Bayville said it was one of the most stressful periods of her life. Credit: Newsday / J. Conrad Williams Jr.; Kendall Rodriguez

For Sarah and Ian Bogaty, selling their home was definitely less stressful than finding a new one.

The couple sold their Plainview house in a few days without an open house and over asking price, but it took a year-and-a-half to find a new home on Long Island while actively looking, living in a rental during some of that time.

"We made three or four offers, but they fell through," said Sarah Bogaty, 42. "And there were a lot of houses where they looked good, but when we got there, it was completely gutted … We had one where we were in contract, but the appraiser said we can’t loan for that."

Despite looking originally in the Melville and Dix Hills area, they ended up in the same school district they were in, a good thing for her two children, ages 9 and 13. In the end, Bogaty said, it worked out.

"I don’t think we settled. It is definitely a house we are happy with."

They close on the house in October and are living in a rental for now.

The dizzying speed at which houses are being bought and sold has changed the business. Before, it was standard to make an offer, sign it and then overnight or fax it to the seller for signature, and then await the inspections and mortgage approval. Now, these same inspections are being waived, buyers are being lured to make a larger down payment, and contracts have become a nail-biter until the seller signs. Even novel ways of making your offer stand out, such as personal pleas and agreements to postpone the closing six months or more, are now standard.

Joanne Mills, a real estate agent with Exit Family Realty in Lindenhurst, has one buyer who recently made an offer that was $50,000 over the asking price, had gone through underwriting to have a mortgage commitment ready to go, has excellent credit rating, no house to sell, and was willing to be flexible on the move-in date. That buyer did not get the house.

"It’s a frustrating time," Mills said. "Sometimes, the buyers feel they are settling. They feel forced to make an offer for more than the seller had even asked for, and that builds on that frustration."

Some real estate agents feel the pain, too. While listing agents, the ones commissioned to sell a house, are doing well with houses selling in no time and for well over asking price, buyer’s agents are dealing with tons of work making offers that never get to the table.

One of the biggest frustrations is that after offers are accepted and buyers sign contracts, sellers prefer to hold out for a better deal and not sign right away.

"It’s not illegal," Mills said. "The seller has every right to accept the best offer until it is signed by both parties. So, it is a dance. Buyers are feeling frustrated, feeling disrespected. It’s very emotional."

Mills sold Risa Matsuki’s home in Copiague in four days, after 14 offers, for about 10% over asking price. The person she chose was financially secure, but the tipping point in her favor was a note she wrote to Matsuki describing what the house meant to her as a first-time homebuyer. Matsuki said she could relate, and approved the offer.

She was thrilled at how easy it was to sell, but soon discovered how excruciating it would be to buy her next home.

"I thought it would be easy, but it was the worst thing ever," she says.

Looking not only for herself and her 3-year-old daughter, but also for her fiance, Paul Davidson, and room for his three older children, Matsuki was set on moving to Syosset for the schools. She found the homes there were going well over the listed price, just like her own, and they kept getting shut out. After months of looking, they settled on a home outside Matsuki’s original quest, in Bayville with harbor views — only to discover that their ordeal had just begun.

"We put in our offer, and they said the price on the flyers and listing were wrong, and it was actually $30,000 more," she said. "It felt crazy. We had to adjust our offer to meet exactly what was said."

Sellers often have final say over when the closing takes place. Matsuki and Davidson made the offer at the end of December, with closing expected in March, but it didn’t close until May 5.

Todd Zipkin, co-owner of Americana Mortgage Group Inc. in Manhasset, advises clients not to get too hung up on the "over-asking price" bid, within reason.

Buyers with good credit are often getting rates just under 3% for a 30-year mortgage, lenders say.

The low rates continue to attract new homebuyers to open houses — like one in Farmingdale on Saturday that drew Brooklynites Khalid and Sadaf Khan, and a Queens couple, Eddie Delvalle and his wife Luz Oviedo, with their children Gabriel Delvalle and Maia Delvalle.

Anthony Zanni, of Keller Williams Points North in Woodbury, who held the Farmingdale open house, said it brought 450 prospective buyers over the two-day weekend, resulting in 53 offers, one of which has already been accepted.

"It’s easy to have 53 offers and present them to a seller, but I can take a buyer to 50 homes and make good offers, and lose every one," Zanni said. "It is frustrating."

Matthew Lenner, agent for Keller Williams Realty Gold Coast, who sold the Bogatys' house and found their new one, said he has never seen anything like this in his 20 or more years in the business.

Sometimes even a high offer doesn’t secure the deal, leaving buyers in a tailspin.

"In Southold, we were literally on our way to the inspection," he said. "The listing agent called on the way. A cash offer of $50,000 over our offer was made. Those are the moments when you get a pit in your stomach."

Still, in the end, there is usually a house.

Mills likened the process to childbirth.

"There is the moment, in the end, when they have the keys in their hands, that it is worth it. It’s like having that baby in your arms. Nothing else matters."

New homebuyers can get help

NYSAR Housing Opportunities Foundation grant: Eligible first-time homebuyers working with a broker can apply for a $2,000 grant to be used for closing costs or down-payment assistance. Grants are given through a monthly lottery. All inquiries should be made via email to: nysar@cfgcr.org.

State of New York Mortgage Association “Achieving the Dream” program: Low income first-time homebuyers could be eligible for a 30-year fixed rate mortgage for as low as 3%, and up to 97% of the purchase price could be financed through the loan. Loans with less than 20% require PMI insurance.

RemodelNY: A state program for anyone who hasn’t owned a home in the last three years and buying a home that needs money for safety hazards and structural reconstruction. Financing is available for up to 97% of appraised value or purchase price as well as funding for the improvements, and as much as 3% of closing costs, with a $15,000 limit.

It seems that some of those buyers rushing to buy a home may be having some regrets months later.

Nearly two-thirds of millennials regret buying a home in last year’s frantic home sales market, according to a survey commissioned by Zach Wichter Bankrate. Among the complaints by that group was that it was more expensive to run a home than originally thought and the rush had them settling for a home that was not the right fit for them and their families.

In the survey taken in April, 64% of millennial homebuyers, ages 25-40, and 33% of baby boomers, ages 57-75, have remorse over buying their homes in the past year. Among the reasons are that they are paying too much, especially in interest and in the high cost of the property, and the home itself — including location and layout of the home. It might not just be this year’s frantic market. Surveys have shown similar results in some years past.

Most millennials also noted the higher-than-expected cost of maintenance of the home as another reason for their regrets.

According to the survey, 15% said they aren’t happy with the house location and 30% felt it was not the right size for their family.

Low inventory and low interest rates have led in some parts of the country, with Long Island being among them, to accelerated buying. Housing costs have risen 20%, and just as importantly, buyers are signing contracts waiving usual protective measures, such as home inspections. Because of the head-spinning market, buyers are left little time to make a decision. Home inspections can show problems with big-ticket items in the home, such as major appliances, heating and air conditioning, foundations, and roofs.

Which LI community is right for you? Find out with the ultimate home-buying guide.Each LI neighborhood has its unique characteristics. Check out dozens of profiles covering communities from Western Nassau to the East End to see which one you should call home. LI home prices hit record highs as listings dwindleIn Nassau County, homes sold for a median price of $630,000 in April, up 13.2% from a year before. The Suffolk median sale price was $480,000, an annual gain of 12.9% LI homebuyers with low, moderate incomes can apply for grantsThe grants are available to families with incomes up to about $113,000 for a family of four. Income limits vary according to family size.