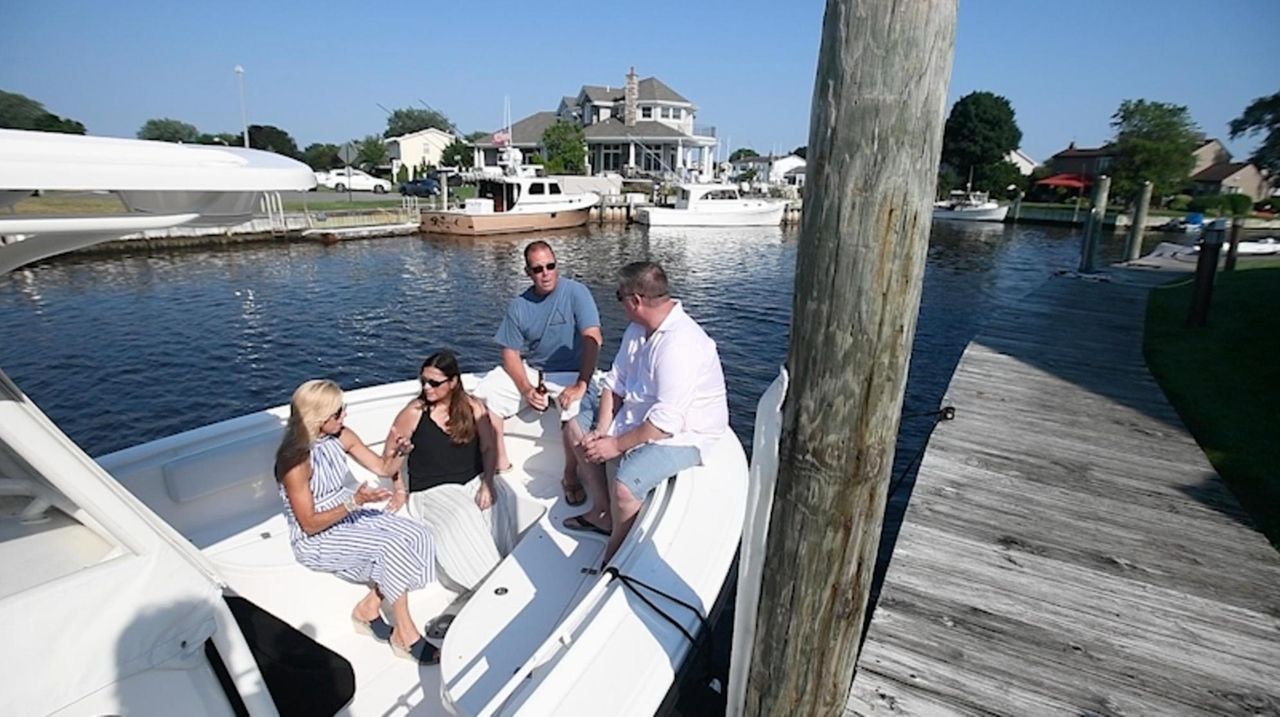 Yes, there's the fear of flooding. But the cinematic sunsets, instant fishing, water sports and the Zen-like ambience is a lifestyle dream come true, according to canal residents Christopher Brennan of West Islip and the Edlers of Freeport. Credit: Newsday / Thomas A. Ferrara; Jeff Bachner

Canal neighbors are an amiable sort, but those separated by a wall of bulkheads and an expanse of water can be hard to get to know. Dr. Christopher Brennan, who grew up with three brothers and a sister alongside a canal in West Islip, accidentally discovered a way to fix this.

“At some point in our childhood, all of us fell in the canal,” he says. “That’s how we met our neighbors.”

Those who live in these unusual communities accept such things with a shrug. Yes, there are dangers, random storms and sporadic flooding. But counter this with cinematic sunsets, instant fishing, water sports and the Zen-like ambience that comes with being close to the ocean and you have a lifestyle dream come true.

“There’s nothing like being able to walk into your backyard, jump in your boat and go,” says Debra Brown, 57, who along with her wife, Sherry Mederos, 58, moved into an Amityville canal home last December. “I’m still trying to get used to it.”

How many people live in the neighborhoods that penetrate like watery capillaries along the South Shore is difficult to figure since municipalities don’t usually break out that statistic. But why they are located there is easy to answer. The phenomenon dates back to a housing boom after World War I along with a health movement that urged city dwellers to enjoy the fresh air of the “country” — Long Island, that is, says Babylon town historian Mary Cascone.

“People were saying get out of the city and get yourself a summer home for the health of your family,” she says.

Back before the war, much of the South Shore was marked as mosquito-infested swampland. But developers realized that upraised canals would alleviate a lot of that problem and give people quick access to the water, a seductive sales point. Clever advertisers promised new homeowners they could park their car in front of their house and a boat in back. One community, dubbed “American Venice” in Copiague (only vestiges of which remains), took its inspiration from Italy and added such features as a lagoon-surrounded gazebo and a copy of the famous city’s arched bridges.

“They actually imported gondolas that would take clients along to show them the properties,” says Cascone, who is also the author of a book about the history of Copiague.

The communities thrived for several years, but were flattened by the Great Depression. Many of the promoters went bust, although some developments, such as “American Venice,” hung on. The canal movement remained dormant until another housing boom appeared after World War II.

Some of the areas were lashed by the storm while others on higher ground got away scot-free. Although prices have rebounded since then, he says, flood insurance costs also have gone up.

The buying public’s response has been mixed.

“Some people ran from the water. Some people ran toward the water,” O’Neill says. “Now, those looking to buy a canal home simply factor in the extra insurance cost and regard it as the price of having a boat in the backyard.”

Canal life is nothing new for Debra Brown, a lawyer and senior education specialist in public health at Stony Brook University. Her mother lived on a canal in Lindenhurst and she remembers summer days paddling around in a rubber raft with her dog, Buttons, and sometimes jumping in to cool off.

Brown never lost her love of the water and even after moving inland kept a boat at a marina. But accessing it was “an all-day affair” that required collecting supplies, driving to the dock and then cleaning the boat at day’s end.

Now, she just throws back the tarp on her 21-foot outboard and roars off toward the bay, she says.

As far as drawbacks, she has discovered that sea grass tends to pile up near her home and the water can rise to an ominous level during storms, although her property hasn’t been flooded yet. These are more than offset by the positives, like being able to spend the morning drinking coffee in the sunroom overlooking the water with Sherry, a clinical social worker/therapist, she says. The two discovered they could anchor off nearby Tanner Park and listen to concerts without having to deal with the crowds on shore. Both are “birders” and were thrilled to see green Quaker parrots hanging out in their trees.

“I never thought I’d be able to sit in my backyard and watch parrots,” Brown says.

Naturally, Brown is anxious about another massive storm blowing into town, a fear shared by Teresa Brace Edler, 36, the manager of a car repossession company who bought a canal home in Freeport two years ago. Several months ago, there was so much water around her property after a storm it looked like an island, she says.

“I’m always worried my yard is going to float away,” Edler says. “But I feel like if you’re going to live on Long Island you need to take in all of it. Or else, why be here?”

Their street has been flooded to the extent that she and her plumber husband, Robert, 41, bought pickup trucks for the vehicles' clearance above the water when they drive home after a downpour, she says. Edler sometimes is annoyed by the town’s limitations on fences that makes backyard privacy difficult. But the compensation is being able to hit the water on weekends to fish or travel to beaches that are only accessible by boat, where their dog, Lincoln, a mini-golden doodle, can run free.

And, of course, people on the water are super friendly.

“Everyone waves,” Edler says. “You almost feel like you have to wave back or you’re snubbing them.”

For Dr. Christopher Brennan, 40, an internal medicine specialist at Good Samaritan Hospital in West Islip, being raised on a canal with his three brothers and sister was a kid’s paradise. His father spotted the property when he was 14 years old and later bought it to raise his family there, he says.

“All our lives were spent boating, fishing, water skiing and taking trips to Fire Island,” he says.

It was paradise lost for awhile when Dr. Brennan moved inland to Rhode Island to complete his medical residency training. The death of one of his brothers, also a physician, caused him to reevaluate his life and he returned to the house he grew up in and bought it from his retiring parents. His wife, Dr. Janet P. Cevallos-Brennan, who is also an internist at Good Samaritan, spent six years in a Navy amphibious squadron and on a search and rescue team. She also loves the water.

“I tell people it’s kind of like an antidepressant,” Brennan says.

Yes, sometimes the mosquitoes can swarm and he is not looking forward to an expensive replacement of the bulkhead, but he enjoys the environment both in the summer and winter, he says.

Living on the water also has its share of drama. Two years ago, the doctor — who was a Fire Island lifeguard in his youth — saw an elderly man in a nearby boat fall into the water near the Robert Moses Bridge. He grabbed a life vest, jumped off his boat, swam to the man’s side and held him above water until the Coast Guard arrived. The doctor visited him at the ER afterward and wheeled him out to his car when the man was released, all part of his “full service” with the hospital, he kids.

Since moving back to his boyhood home, the Brennans have enlarged one of the picture windows to expand their water view. Another favorite pastime is watching the marine life attracted to underwater lights he installed near his dock, Brennan says. His nighttime “aquarium” draws striped bass, weakfish, eels, baby crabs and snappers.

He can see the bay one way and Good Samaritan Hospital when he looks in the other direction. He walks to work.