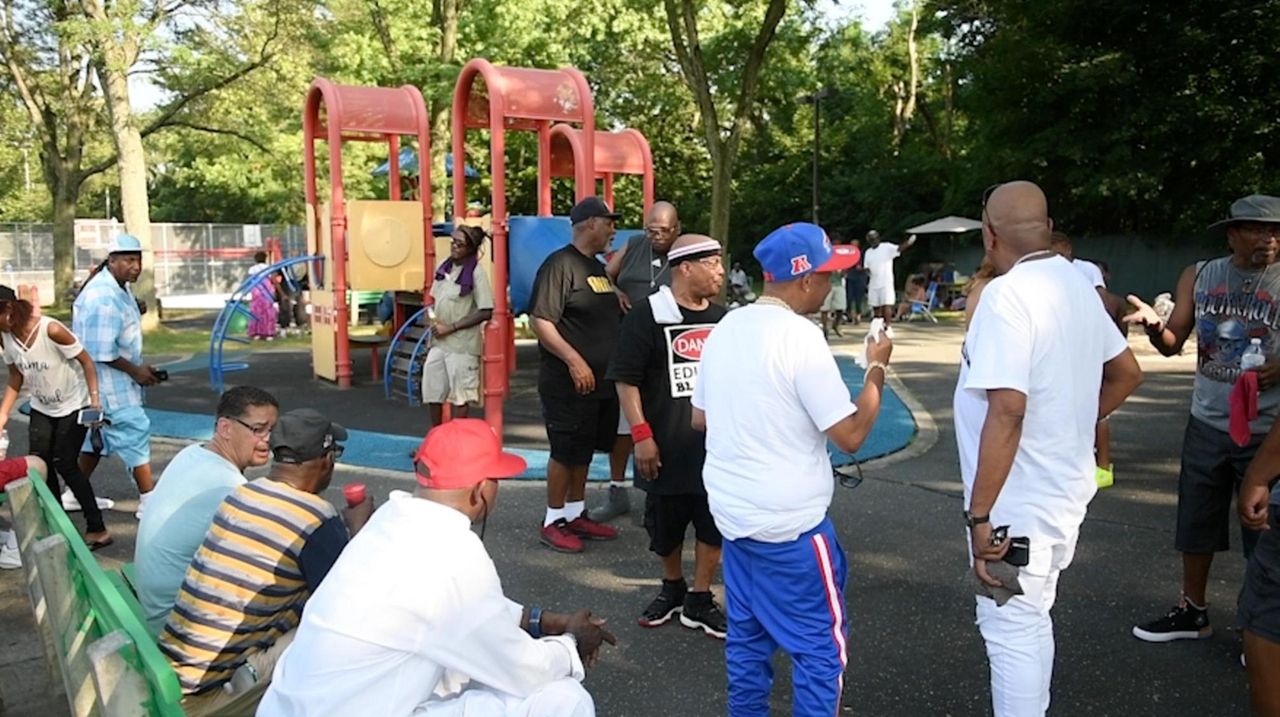 Whether it's a summer concert in Sea Cliff or a reunion of childhood friends in Uniondale, each community has its own traditions. Credit: Newsday / Steve Pfost, Thomas A. Ferrara

These are experiences people crave, says Margot Garant, mayor of Port Jefferson Village, where residents turn out in droves to support beloved community traditions such as an annual Charles Dickens Festival each December.

“People want that … we’re kind of starving for that as a culture,” says Garant. “It makes them feel they’re connecting with something we’re kind of losing, which is a historical cultural experience they can participate in."

A scorching heat wave in late July didn’t stop friends and neighbors of all ages from reconnecting at a spot that has long served as the heart of the neighborhood: a park with basketball courts, where local youths have been shooting hoops and forging friendships for generations. The former Smith Street Park — recently renamed Bernard Brown Park to honor a school district staffer who was a dedicated mentor of Uniondale youth — has become the site of an annual reunion picnic, now in its ninth year, for those who know the unique joys of growing up in this tight-knit, supportive neighborhood.

“We all look forward to that third weekend in July," says Larry Moore, 66, a retired corrections officer whose late best friend the park was named for. "Everybody gets together, it’s just beautiful."

He says that the camaraderie runs deep. "The way we were brought up, the kids I went to school with, everybody loved each other, respected each other and that’s how we grew up," says Moore, a lifelong resident.

Buying here In a recent search of MLSLI.com, homes for sale in Uniondale ranged from $260,000 for a three-bedroom, one-bathroom ranch to $659,999 for a four-bedroom cape with two full bathrooms and two half bathrooms.

In the North Shore village of Sea Cliff, overlooking Hempstead Harbor and the Long Island Sound is a grassy gathering place, officially named Veteran’s Memorial Park. Locally known as “Sunset Park,” it has long been a favorite spot for residents to come together and enjoy the sky’s long, lazy tradition from daylight to twilight — especially during the summer concerts known as Sunset Serenades.

For one area resident, the sunset itself is beside the point. Vinny St. Marten, a local musician who has been blind since childhood, says he has enjoyed the tradition from both sides of the microphone over the years. On a recent warm August night, he performed a Sunset Serenade with his band, Vinny St. Marten & Blind Boy Blues. Though he can’t see the sunset, the concerts are like a treat for his other senses, he says. “Between the smells and the sounds and the people laughing and having a good time — it’s like being at a feast,” says St. Marten, 74, who lives in nearby Glen Cove. “Music, people playing, people dancing. It’s really a great place to be.”

Buying here In a recent search of MLSLI.com, homes for sale in Sea Cliff ranged from $437,000 for a two-bedroom, one-bathroom Colonial to $1.15 million for a six-bedroom, four-bathroom Colonial with views of the Long Island Sound.

Many Long Islanders are familiar with the Mattituck Strawberry Festival, a multiday affair that unofficially kicks off the summer season each June with a celebration of a signature North Fork crop, the strawberry. But while the main event draws thousands of visitors annually with carnival games, rides, fireworks and fruity treats, a more intimate gathering, known as Hulling Night, brings neighbors together on the eve of the festival to prep the berries and get ready to put their community’s best foot forward.

“It’s just a lot of fun,” says Vivian Fritz, 16, a junior at Bellport High School. “You don’t do much except hull strawberries, but for some reason we can sit there for hours, and we get bucketloads done, and it’s nice.” Fritz says she enjoys the opportunity to unplug and connect in person. “You can’t use your phone while your hands are covered in strawberry juice,” she says. “You’re just there for hours doing the same task. It’s a really nice way to get to bond with people.” Fritz and her 20-year-old sister volunteer every year along with their mother, a development director for a charitable organization that benefits from the festival

Buying here In a recent search of MLSLI.com, homes for sale in Mattituck ranged from $265,000 for a one-bedroom, one-bathroom seasonal cottage to $12.5 million for a seven-bedroom, eight-bathroom estate and equestrian farm.

For nearly a quarter of a century, the Village of Port Jefferson has been transporting holiday visitors back in time for the Charles Dickens Festival — an immersive experience in which one might encounter a roaming Dickensian character while strolling through streets bedecked in Victorian-era holiday splendor. Seasonal music, ice skating, horse and carriage rides and sweet confections set a magical scene.

“It is super fun because everybody’s in a happy spirit for Christmas,” says resident and performer Nicholas Rodriguez, 10, who made his festival debut as the street character Young Scrooge four years ago. He will play Oliver for his second time this year in an outdoor performance of the musical “Oliver!”

Village Mayor Margot Garant says that one of the keys to keeping this tradition alive and thriving is a commitment to the performing arts. “We are dedicated to this. There’s not a lot of people who really invest in the arts the way that we are investing in the arts. They should be treated as an anchor, and one of the pillars, that makes a community strong.”

Buying here In a recent search of MLSLI.com, homes for sale in Port Jefferson range from $379,000 for a two-bedroom, 2½-bathroom condo to $3.25 million for a six-bedroom, 5½-bathroom waterfront contemporary.

For sale This house in Port Jefferson with three bedrooms and 2½ bathrooms is listed for $499,000. It recently went into contract. Annual property taxes are $10,631. Listing agent: Lauren Blackburn, Douglas Elliman Real Estate, 631-751-6000.

When the Huntington High School community has something to say, you’ll get the message: For more than 50 years, the 12-foot face of a boulder, locally known as The Rock, has served as a sort of low-tech message board that students, and sometimes parents and alumni, paint and decorate to mark an occasion, commemorate an event, make a statement or even a prom proposal.

Ilene Messina, 61, a 1975 graduate who has worked as an aide in the district for 15 years, says The Rock has been a part of her family’s life for several generations. She recalls painting the school’s blue devil mascot on The Rock during her own high school years — as well as starting a new tradition for her daughter’s class in 2010. She and other parents were the first to cover the rock with the logos of the graduating seniors’ chosen colleges.

“It’s this kind of beautiful, unscheduled, grassroots kind of thing, where people respect each other’s messages and they won’t go over them for a certain period of time. And we don’t govern them,” says Huntington High School Principal Brenden Cusack. “To me, that’s pretty special.”