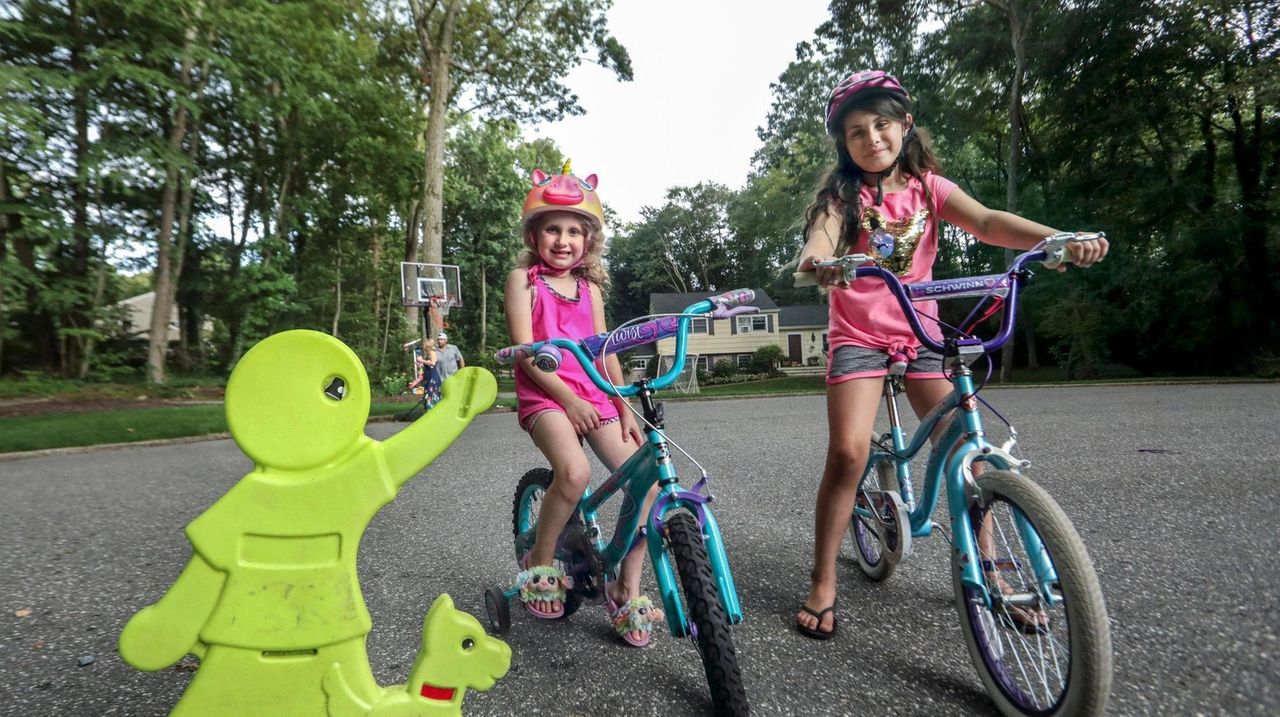 When a house went up for sale on the Huntington cul-de-sac Vj Hannemann grew up on, buying it was a "no-brainer," said the teacher and father of two girls.  Credit: Newsday / John Paraskevas

Nearly 30 years ago, when Donna Rabin Borenstein and her husband, Steven, were looking for a home, they had a few criteria in mind: four bedrooms, at least three bathrooms, and a quiet street. But there was also one additional feature they were really hoping for.

“We wanted to be on a cul-de-sac,” Borenstein, 59, says. “I wanted my children to be able to play outside with no traffic coming in.”

And that’s exactly what she got when her family moved into their Hewlett residence 28 years ago. Their home joins four others on the secluded street, a perfect play area for the neighborhood’s kids.

Like picket fences and neatly manicured lawns, cul-de-sacs are a trademark of Long Island suburbia. While commonly referred to as dead-ends, which also only have one way in and out, cul-de-sacs are distinguished by their rounded end — hence their name, a French term that means “the bottom of the sack.”

Though now the delight of bike-riding children, these circular turnarounds date back to the 15th century, when they were used to entrap enemy soldiers in Athens and Rome. Fast-forward a few centuries to 1930, and cul-de-sacs became the rage in America once the Federal Housing Authority began promoting them as a solution to monotonous urban street grids.

And today, the community crescents remain just as popular — for both sellers and buyers. A study done in 1990 by Temple University credited cul-de-sacs as raising home values as much as 30 percent, while research done this year in Bakersfield by California State University revealed that living in a cul-de-sac increased home value by 5 percent, in addition to raising the value of homes next to a cul-de-sac by 7 percent.

“People will generally pay $15,000 to $20,000 more on the average, just because a house is on a cul-de-sac,” says Adolph Littlejohn, a Realtor with Hauppauge’s eXp Realty.

Lawrence Levy, vice president for economic development and the executive dean of the National Center for Suburban Studies at Hofstra University in Hempstead, notes that cul-de-sacs provide homeowners a sense of both inclusivity and exclusivity.

“The cul-de-sac is the closest thing to a gated community without a gate. The cul-de-sac creates a spirit of inclusivity, where you have a much better chance of getting to know your neighbor,” Levy says, adding that “because of the geometry of it, you’re separated from the rest of the neighborhood in a way that you aren’t on just a straight street.”

Those looking to buy a home on a cul-de-sac typically have children or are expecting them, says Littlejohn. And once they move in, it’ll be a while before they leave, he adds.

“People stay there a long time,” Littlejohn says. “There’s really no negative side to them.”

When a house went up for sale on the Huntington cul-de-sac  Vj Hannemann, 47, grew up on, buying it was a “no brainer,” he says.

“I just had awesome memories of myself and all the neighborhood kids playing in it when I was young. It was like having your own private park,” says the teacher and father of two girls, ages 10 and 6. “Now my kids can play on the same cul-de-sac I did.”

Kendra Monahan, 40, an insurance broker, moved into a cul-de-sac in East Northport eight years ago, joining neighbors who had been on the street since the houses were built in the late 1960s.

“We didn’t know we wanted a cul-de-sac, we just wanted a quiet street. But we love the cul-de-sac now that we’ve been here,” Monahan says. “I feel like you get to know your neighbors better because everyone is right there and not out of sight.”

Effrain Reyes, 46, has lived on the edge of a cul-de-sac in Islandia for the last 42 years. Having grown up in the home he now lives in, he says he enjoys the privacy that the cul-de-sac provides. “There’s not a lot of cars going in and out. You can tell if there’s a car that doesn’t belong because everyone parks in their driveway,” says Reyes, a Long Island Rail Road conductor.

Making sure he knows who is in the neighborhood is especially important for the father of two, whose children go to the cul-de-sac at least four times a week to ride their bikes.

“It’s very quiet and safe. I don’t have to worry about my kids being outside,” he says.

The unique shape of the cul-de-sac also provides parents an advantageous vantage point.

“There was nowhere they could play that I couldn’t see them,” says Levy, who raised his kids on a cul-de-sac in Dix Hills for 10 years. “And there was no one on the cul-de-sac who didn’t belong there. If you see them, you know them.”

HOMES FOR SALE ON CUL-DE-SACS

This Bayville home, once an inn around 1912, is listed for $899,000. It is on a cul-de-sac. The house has four bedrooms, three bathrooms and one half-bathroom and is on a .5-acre property. Annual property taxes are $13,681. Listing agents: Kimberly Bullis Byrd and Paul Dougherty, Daniel Gale Sotheby's International Realty, 631-427-6600