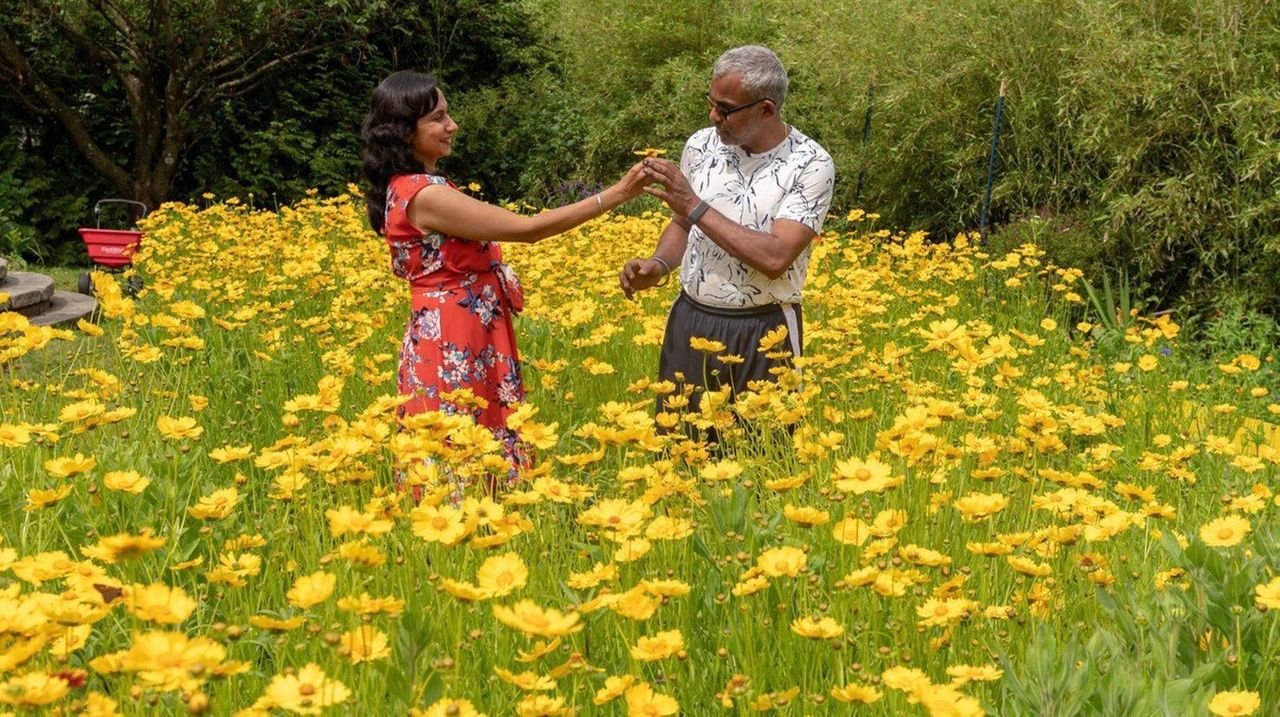 For Bill Bohn of Huntington and Sonia Arora and Raju Rajan of Port Washington lawn maintenance is a labor of love. On June 7, Bohn talked about how lawn maintenance is a year-round process. And, Sonia Arora and Raju Rajan talked about trading their neatly cut yard at their Port Washingtom home for an ecologically friendly meadow. Credit: Corey Sipkin

A precisely cut, lush green lawn is more than just a symbol of suburban America; for many homeowners, it’s a badge of honor. However, having the perfect yard isn’t as easy as it looks: there are seeds to sow, weeds to pull and patches to fix, not to mention the mowing. But for these Long Island homeowners, maintaining the best lawn on the block is all a labor of love.

Taking the lawn into his own hands

After 30 unsatisfactory years of using a landscaping service, it was exasperation that drove Bill Bohn, 65, to do a complete overhaul of his Huntington lawn. In the fall of 2017, he ripped up his entire 10,000-square-foot lawn, turning the soil over, aerating it and raking the land. He also switched to all-natural and organic fertilizer, seeds, micronutrients and topsoil.

“In one year, my lawn looked spectacular,” said Bohn, who owns a printing company. “It was a big process in the beginning, but the results are worth it.”

Lawn maintenance is a year-round process for Bohn and his son, a fellow lawn lover. He dethatches and overseeds in the fall, aerates in the spring and puts down pelletized lime to offset acidity in the soil and restore it to a neutral pH. Bohn’s efforts kick into high gear in the summer, when he sticks to a strict biweekly mowing schedule, sharpening his mower blades every time for a precise cut. Micronutrients are also applied throughout the year according to a schedule.

Not only is Bohn seeing results, but the switch has paid off financially. He estimates he has saved close to $2,000 a year by doing his yard work himself. He admits that maintaining the perfect lawn is laborious, but adds that the view from his window is worth it.

“You need to stick to it; it’s not something you can just let go,” he said. “But the profit is in the way the lawn looks.”

The greenest lawn on the block

For Guy Lockhart, 45, maintaining the best lawn on the block is more than just a point of pride — it earns him bragging rights. The Hempstead resident has maintained a friendly competition with his neighbors and friends to see who can have the most luscious lawn.

“We don’t share tips -- it’s a fierce competition,” he says with a laugh. “I take photos and send it to my friends. It’s friendly banter.”

The Long Island Rail Road engineer uses a landscaper for maintenance and mowing, but is meticulous about treating his lawn. At the start of the season, he puts down a blend of Kentucky bluegrass and tall fescue seed, in addition to treating it with lime and a starter fertilizer. During the summer, his efforts lie largely in maintaining a proper water schedule, and in the fall he overseeds, aerates and dethatches it.

“I’m the nurturer of the lawn,” Lockhart says, noting that his interest in lawn care began at a young age. “As a kid, I cut grass and I always admired other people’s landscaping. Once I became a homeowner 12 years ago, I put all those ideas into my house.”

He favors products from nurseries over chain stores, noting that results lie largely in the quality of the products.

“I’ve seen my best lawn come from when I have good products,” Lockhart said. “You need good grass seed from a reliable company, good fertilizer and to keep it watered as best as possible.”

Encouraging biodiversity with a meadow

Butterflies, bees and wildflowers abound in the Port Washington backyard of Sonia Arora, 49, and Raju Rajan, 53, who in 2018 decided to trade their neatly cut yard for an ecologically friendly meadow that required less water and fertilizer in an effort to promote biodiversity and lessen their environmental impact. “The lawn is a waste. It’s a monoculture with zero productive purpose,” said Rajan. “No one eats it, we pay to plant it, we pay to throw it away, and we pay to bring fertilizers in to grow more of it.”

After rototilling the backyard, they put down flat pieces of cardboard to stop the grass from growing and topped it with mulch. Three months later, Rajan put down seeds for flowers and plants native to Long Island, including sweet William, black-eyed Susan and milkweed. Twelve weeks later, flowers began to bloom in the backyard.

In addition to the natural beauty of the meadow, it requires very little maintenance. Rajan estimates he spends about 20 minutes a week in the yard to pull weeds.

“Meadows require knowledge. It’s not brute force, it’s knowing your plant from your weed,” he says, adding that the iNaturalist app is a helpful aid in identifying plants. “You develop an eye for it.”

They use a rain barrel supplied by the Town of North Hempstead to offset the need for sprinklers and don’t apply fertilizers, pesticides or insecticides.

“This is better for all of us,” says Arora, an educator. “It conserves water and prevents fertilizers and pesticides from going into the water.”

While there was some initial hesitation about what their neighbors would think, Rajan and Arora say the feedback has been positive so far.

“A lot of people come by and say it’s beautiful and that they’ve never seen so many birds and butterflies," says Arora.

In addition to the hard work and financial investment that goes into lawn care, there’s a lot of trial and error. Here are some tips to make your thumb as green as the lawn of your dreams.

How to plant: Tall fescue and Kentucky bluegrass are ideal for Long Island lawns, says Tamson S. Yeh, a turf and land management specialist with the Cornell Cooperative Extension of Suffolk County. Yeh favors tall fescue for its ability to withstand heat and drought, as well as for its massive root system.

The Long Island Native Plant Initiative, a volunteer organization that seeks to promote biodiversity through the preservation and planting of Long Island’s native species, notes that those looking to attract butterflies and native birds can also plant big and little bluestem, broom sedge and switchgrass.

How to water: One of the most common problems homeowners have is overwatering, says Karen Musgrave, marketing and education specialist at Hicks Nurseries in Westbury. She advises putting down a total of 1 to 1 ½ inches of water per week in one or two applications.

“People think because they can water every other day, they should. But you shouldn’t,” Musgrave says. “By applying all the water in one or two waterings, you are encouraging a deeper and healthier root system, which is healthier for the grass plants. Watering too frequently encourages shallow roots that will struggle during stressful times such as drought and hard, cold winters.”

To figure out how long you need to run your sprinklers to put down the perfect amount of water, Musgrave suggests placing shallow containers, such as tuna cans, on the lawn and running the sprinklers to see how much is collected in one hour.

How to mow: Mowing your own grass is an easy way to save money on lawn care. Musgrave suggests having a sharp blade and moving it up and down, depending on the season and how long you want the grass to be. During the summer, she advises mowing at 2 ½ to 3 inches tall. “By mowing [at that height] you’re giving the lawn just the right amount of shade so it retains moisture and doesn’t get too many weeds,” she says.