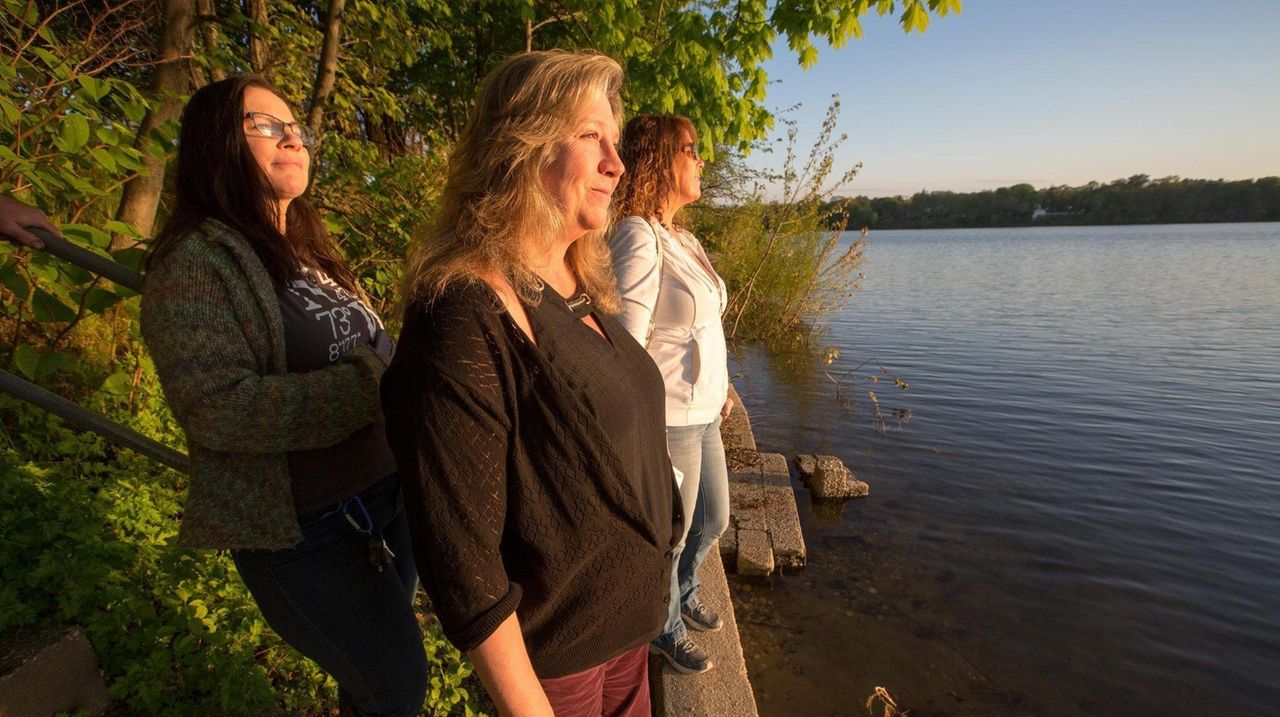 Kathy Meyers, a Lake Ronkonkoma native, brings people together to watch sunsets at the lake as a way to appreciate the community and each other.  Credit: Linda Rosier

The Hamptons may get all the glory, but the East End is far from the only summer hot spot in Long Island’s history. In fact, resort colonies have gone in and out of vogue in coastal communities all across Nassau and Suffolk counties since at least the late 19th century, when the transportation improvements of the Industrial Revolution first began to make Long Island a feasible and tempting destination for city dwellers.

Since then, some of these areas have become year-round communities that bear little resemblance to the fashionable vacation spots they once were — while others continue to draw summer crowds today. Following are the stories of six Long Island communities with resort-town roots.

Bellport’s transformation from fishermen’s village to trendy resort began with a 19th century Long Island Rail Road brochure promoting the Great South Bay location as a seaside and sailing destination. It caught on; the wealthy began to buy grand country homes there, and a resort scene flourished. At its height, Bellport had several large hotels and an assortment of other accommodations, which thrived until tourism slowed between World War I and World War II. Even then, the village remained a popular weekend and day trip destination.

“It was a very relaxed but cultured summer society where the outdoors was a really important part of life here,” says Tricia Foley, director of the Bellport-Brookhaven Historical Society. “It was really quite a destination. There was so much going on" -- everything from golf and sailing to concerts and art classes, she says.

Though Bellport’s last hotel was gone by the 1950s, its resort-era love of the arts endures today. A bandshell hosts a summer concert series. In June and July, the village will celebrate area artists with “An Artists’ Place,” an exhibit and related programming. Beaches, boating, golf and bicycling around Bellport have never gone out of style, Foley says. An abundance of period architecture remains, such as historic sea captain’s houses, as well as an original inn that is now occupied by the restaurant Porters on the Lane.

Home prices in Bellport Village range from $329,000 for a two-bedroom cottage to $5 million for a seven-bedroom waterfront Cape in a recent search, according to a recent search of the Multiple Listing Service of Long Island.

Yesterday Oceanfront living in Long Beach once could be had for the price of a shack — literally. According to city historian Roberta Fiore, primitive wooden shelters once were delivered by barge and “plopped on the sand,” where people of limited means could vacation at the beach. But the first formal attempt at resort development was the Long Beach Hotel. Built in the 1880s, it was the largest oceanfront resort in the world at the time — but its heyday came to an abrupt end in 1907, when the hotel burned down.

And then came the visionary New York State Sen. William H. Reynolds, whose grand plans ushered in “a very elegant way of life,” Fiore says. “A fabulous boardwalk … fancy houses … and a very posh hotel, where very famous people would come and stay.” Shopping, music, dining and nightlife arose to cater to the new upscale crowd. “And all of sudden, boom. The blossom opens. The rose came to fruition,” Fiore says. “The history of Long Beach is a property that in 10 years had turned from a sun and sandbar into a city.”

The city’s architectural evolution is evident today in its eclectic patchwork of unfussy bungalows, opulent Mediterranean-style homes, high-rise condominiums and everything in between, all of which continue to house both year-round and seasonal owners and renters.

The boardwalk — now rebuilt, after significant storm damage by superstorm Sandy in 2012 — and the public ocean beach continue to draw the visitors that support the city’s diverse mix of shops, restaurants and bars. Entertainment still abounds, from concerts to craft fairs to fireworks displays.

Yesterday Roaring '20s revelers once frequented the shores of Long Island’s largest freshwater lake. It started as an undeveloped picnic site — but once local developers took note of its growing popularity among well-to-do weekenders, a grand colony of open-air pavilions, restaurants, a Ferris wheel and other amusements arose. A lakefront hotel and nearby bungalows accommodated overnight visitors, says Joyce Sorrese, curator of the Lake Ronkonkoma Historical Society. Indeed, her own home, now expanded and modernized, was one of the original summer cottages.

“My grandmother told me she and my grandfather used to come out here in the '20s,” says Sorrese. “It was just incredible. There were pavilions, there were parachute jumpers, there was singing, dancing, all sorts of merriment … There were bands and dance halls … You could hear the music clear across the lake.”

After the tourist trade dried up during World War II, the former resort descended into decades of neglect, fires and pollution — until determined locals formed the Lake Ronkonkoma Improvement Group about three years ago and began holding monthly cleanup events.

Their impact is noticeable. “Now it’s so obvious that it’s loved again,” says lifelong resident Kathy Meyers, 55. She is a member of that group, and the founder of The Sunset Club, which gathers informally to watch sunsets from Larry’s Landing, the former site of a lakefront bookstore. In the future, “I would love some kind of walking trail with little signs that would explain what lives here, what we’re trying to do ecology-wise, why you shouldn’t feed the geese,” says Meyers, noting that goose overpopulation and droppings lead to unhealthy bacteria levels in the lake. She says she hopes that one day the water will be clean enough for swimming again.

Home prices in Lake Ronkonkoma ranged from $229,000 for a two-bedroom ranch to $685,000 for a five-bedroom Colonial, in a recent search of MLSLI.com.

Against the backdrop of segregation, discrimination and violence, an unlikely resort community was conceived and built by and for African-Americans through the vision, resourcefulness and tenacity of two women. It was during a 1940s stay in Sag Harbor’s historically diverse Eastville community that Brooklyn schoolteacher Maude Terry spotted the potential in an undeveloped 20-acre parcel of land. She sought out the landowners — Elsie and Daniel Gale, of Long Island real estate fame — and forged a partnership to subdivide and sell the lots.

Terry and her sister Amaza Lee Meredith — one of the first African-American female architects — became co-managers in a syndicate that helped African-American buyers bypass lending discrimination and other obstacles to build the homes that would form this unique summer haven. "Because it was so vibrant and diverse — with active crafts people, artists, intellectuals and professional residents — the community was able to sustain itself and creatively maneuver the challenges of the Jim Crow era,” says Sarah Kautz of the Cold Spring Harbor-based nonprofit Preservation Long Island.

Even as newcomers and new homes are added to the mix, the three subdivisions that grew from those efforts — Sag Harbor Hills, Azurest and Ninevah Beach, or SANS — maintain a strong sense of the community's past. To help preserve the neighborhood’s historic character in the face of increasing modern development, resident Renee Simons successfully led an effort to have SANS listed on the New York State Register of Historic Places in March; national registry is expected to follow.

This four-bedroom waterfront Contemporary in the SANS community of Sag Harbor Hills is the former home of restaurateur B. Smith. It's listed for $7.9 million with Joyce Jackson of The Corcoran Group (917-710-1277).

Yesterday A scenic spot, an active steamboat port and the arrival of the Long Island Rail Road were attracting summer crowds to hotels and boardinghouses along Glen Cove’s shores by the mid-1800s — but an asparagus blight gets the credit for turning the area into a playground for tycoons at the turn of the century, says Amy Dzija Driscoll, director of the North Shore Historical Museum. When the local crop failed, some area farmers decided to sell their vast properties to New York City business magnates, who built lavish second homes there.

Those owners of those so-called Gold Coast estates popularized posh pastimes, such as yachting, equestrianism, polo and golf — leisure activities which in turn attracted a new group of up-and-coming professionals to build in the area, says Paul Mateyunas, an author of multiple books on North Shore history and an agent with Douglas Elliman Real Estate. “A picturesque country house community developed around what’s now the Nassau Country Club,” Mateyunas says.

As upkeep became difficult in a declining economy, most of the grand estates were subdivided after World War II. However, a number of the original mansions have been repurposed for modern use, such as the Mansion at Glen Cove, a hotel and conference center, and the Webb Institute, a private college; both are former estates of the Pratt family.

Home prices in Glen Cove ranged from $230,000 for a one-bedroom co-op to $4.39 million for a four-bedroom Contemporary, in a recent search of mlsli.com.

Yesterday A skinny sandspit poking into Stony Brook Harbor was once the site of a hotly contested — and ultimately doomed — colony of summer bungalows. In the early 20th century, families put up tents, and later, erected wooden cottages, on beach lots leased from the Town of Brookhaven. Many returned every summer for generations to enjoy the simple pleasures of sand, sun and surf. It was idyllic while it lasted. “People had great times there,” says Brookhaven town historian Barbara Russell. “They had clambakes on the beach. It was simple beach living.”

The problem was that these private cottages were built on public land, creating the impression that a desirable stretch of the taxpayer-owned beachfront was being kept off limits to all but a privileged few. After years of bitter disputes and legal and political maneuvering, the cottages were ruled illegal. Almost all of them were removed in 2004.

West Meadow Beach is now a public park. In addition to the beach, there is a playground, a spray park, a volleyball court and a paved path for walking, biking and skateboarding. Gamecock Cottage, an original boathouse constructed at the turn of the 19th century, still stands at the tip of the peninsula.

The park is most accessible from the Three Village communities of Stony Brook, Setauket and Old Field. In a recent search of MLSLI.com, homes for sale ranged from $435,000 for a four-bedroom Colonial in Setauket to $16.888 million for a Mediterranean-style five-bedroom waterfront estate in Old Field.

This 1929 four-bedroom Stony Brook Colonial located near West Meadow Beach is listed for $789,000 with Patricia Cain and Stephen Healy of Daniel Gale Sotheby's International Realty (631-689-6980) and recently went into contract.