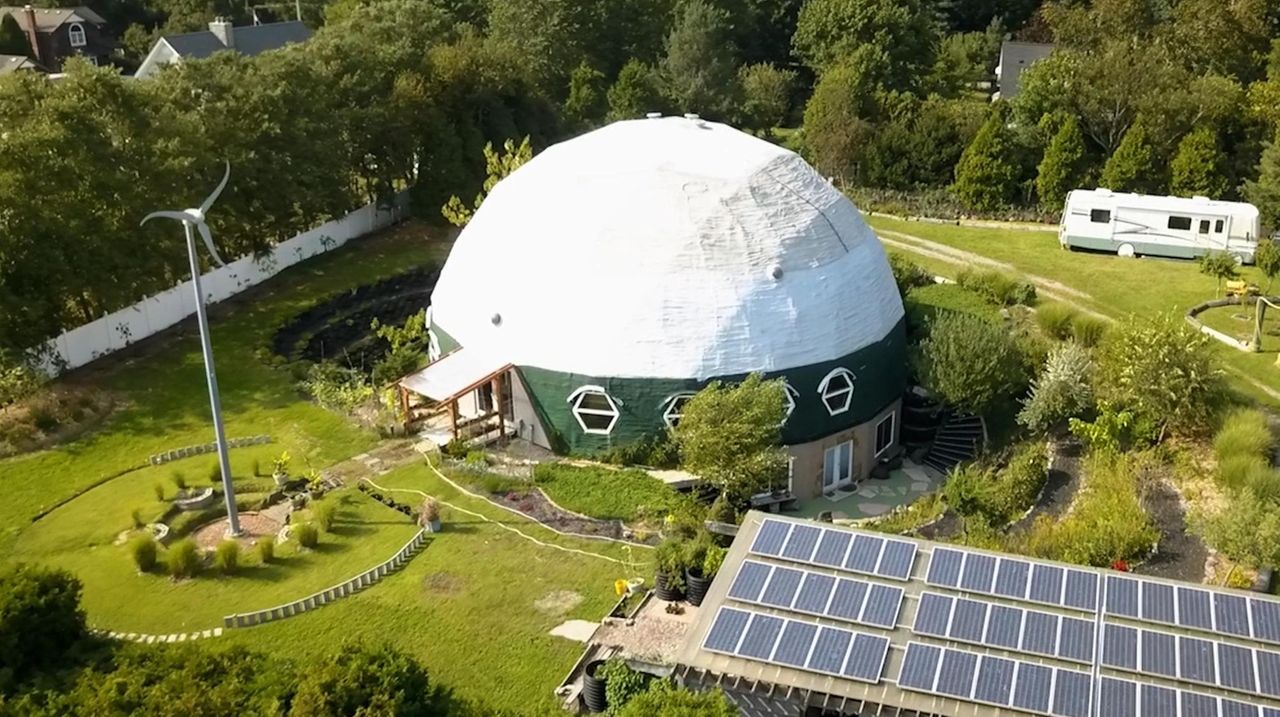 Kevin Shea gives a tour of his three-level dome-shaped house in Baiting Hollow, which he designed and built to be eco-friendly. Credit: Newsday / Chris Ware

Long Island is filled with houses of all sizes, from miniature cottages to vast mansions that, at their core, are fundamentally square or rectangular structures. But the landscape is also dotted with unusual abodes that don’t just break the mold, but re-imagine what a home can be, challenging our assumptions and combining functionality with aesthetics along the way.

Here is a brief tour of some of Long Island’s more unusual houses, from the Double Diamond to geodesic domes to a house that looks like a stack of Legos.

In 1958, Arthur Pearlroth, a writer, and his wife, Mitch, who worked in fashion, hired noted architect Andrew Geller to build a beach house after they read about one of his designs. The couple was delighted when Geller presented them with plans for a 600-square-foot beach house in Westhampton Beach designed as a pair of diamond-shaped cubes that looked like they were balanced on their edges. The land and house cost $12,000.

"It was a magical house," says their son, Jonathan Pearlroth, 61, a lawyer. "I enjoy hanging out in the old Double Diamond house for hours on end."

Today, the house, which has three tiny bedrooms, still looks cutting-edge, but it now sits behind a 3,600-square-foot house that Pearlroth built in 2014, after moving the Double Diamond closer to the road as part of an effort to preserve it. The new home has five bedrooms and a facade with a wood pattern that looks like waves, including two giant doors that close, providing a backdrop that highlights the shape of the original beach house.

"It was tastefully done, a simple, new structure intentionally designed not to clash with the diamonds," Pearlroth says of the complex that also includes a swimming pool. He lives in Greenwich Village, coming to this house on weekends in the colder months with his wife, Holly Posner, 55, a neurologist, and two children, and rents out the beach house and bigger house as a package in the summer.

"I still enjoy looking at the architecture," Pearlroth says. People who rent the complex are "blown away by it."

For 45 years, Jim and Jane Baringer called a geodesic dome in East Hampton home. The couple built the 2,400-square-foot structure with a 40-foot diameter in 1977.

"I fell in love with the shape and the idea of how much space you could get, and the idea that it wasn’t a traditional house," says Jim Baringer, 77, "It wasn’t four walls and a roof."

A retired movie-set builder, Baringer built the residence himself using kiln-dried wood from Oregon that he arranged into hexagons and pentagons to make a geodesic dome. He got help from professional plumbers, electricians and a mason.

The original mortgage was about $30,000. The pentagonal skylights leaked in the beginning, so Baringer rebuilt them tighter about a decade ago, he says. In order to hang pictures vertically on the angled walls, the Baringers put wedges behind them. The couple furnished the house with typical furniture and a wood-burning stove in the center to supplement the oil heating.

A curved staircase around the exterior wall leads to the spacious second floor. Light comes in via large windows, dormers and skylights. The house has four bedrooms and three bathrooms.

Baringer and his wife, Jane, 77, a former medical secretary, social worker and teacher, sold their dome in February for $865,000 and moved to New Hampshire to be closer to family.

They will always have fond memories of raising their kids there. "It’s eye-catching," Jim says of the house that has more curves than corners. "The kids loved it. They were quite proud of it."

While most houses are variations on a cube, the residence in Long Beach that some call the Lego House consists of four interlocking cubes.

Built in 2017 on a 60-by-60-foot double lot, the 2,200-square-foot home stands out from its neighbors. From the terrace, there’s a waterfront view of Reynolds Channel.

"The owner wanted it to be completely modern and unlike other Long Beach homes," says Alex Rubin, the associate broker at Douglas Elliman handling the sale of the house, which is on the market for $1.24 million.

Long Beach-based architect James Joyce designed the house for the owner, who had visited and fallen in love with the oceanfront and bayfront city. Rubin says the idea for the design came from container homes and an affection for "anything Frank Lloyd Wright." The house includes lower and upper decks, a dumbwaiter, an oversized front door and a large staircase made of maple with custom metal railings in the center of the house.

"The house will suit someone who doesn’t want a cookie-cutter beach house," Rubin says. "I love the finishes of the house. No one comes through the door and doesn’t say ‘ooh’ and ‘aah.’ "

Cartoonist Bill Hoest is the originator of The Lockhorns, which debuted in Newsday in 1968 as "The Lockhorns of Levittown," but his largest work of art is the house he created in Lloyd Harbor.

"It looks like a small castle," says his widow, Bunny Hoest, who has kept The Lockhorns going, with artist John Reiner, since her husband died in 1988. "All that’s missing is the moat." The home is notable for its turret, which Bill Hoest used as his artist’s studio.

Bill Hoest studied at The Cooper Union in Manhattan, where he learned that not only does form follow function, but "If it doesn’t function, no matter how gorgeous it is, you’ve failed the course," Bunny Hoest recalls.

Hoest, who turns 89 next month, says her husband designed the home to take advantage of the parcel they bought in 1974. The builder was Jimmy Russo, a shop teacher in the Huntington School District who was also a builder, she says.

With a view of Long Island Sound, the turret, 10 feet in diameter, was designed as an illustrator’s studio with all of Bill’s materials within reach. "It’s a fantastic situation to sit and swivel and have everything at your fingertips," Hoest says. "We see sunsets. They’re gorgeous."

Kevin Shea, a retired New York City firefighter, designed, built and lives in the Long Island Green Dome in Baiting Hollow, although he says the proper term is a "geodesic polyhedron," a sphere composed of a series of triangles — 624 triangles in this case. Shea designed the three-level house, completed in 2005, as an example of green architecture.

Shea, 54, got interested in domes as environmental variations on standard boxlike housing designs in 1993 and began searching for an eco-friendly home he could build and afford. "I started looking up domes," Shea says. "They said it was an eco-friendly house. You use less lumber to produce more space."

Two-thirds of the materials used to build the home were recycled or reclaimed, Shea says. The dome is insulated with 5½ inches of foam and is heated with hydronic floor heating, with tubes in the concrete that fill with water heated by electricity from a solar array. "The house never gets too cold, because it’s submerged 9 feet in the ground," he says.

The house is 70 feet in diameter, 45 feet tall and has 5,850 square feet of living space, with a 3,760-square-foot first floor. Sunlight pours in from the windows on the south side, and the home is surrounded by a terraced garden with 800 tires filled with perennials. The house has an open plan, with a spiral staircase leading to a second floor that includes a bedroom designed to look like a ship, complete with portal-shaped windows and helm and then to a third-floor home office.

"It’s so spacious. I never get cabin fever," Shea says. "I feel comfortable and calm, like I’m in a big bubble. It’s like being in a fortress of solitude."

When Mark and Wendy Biderman first saw the house in Bridgehampton that Modernist architect Norman Jaffe had designed for sportscaster Jack Whitaker in 1977, they knew it was for them, with its slanted roof that slopes to the front entrance and other classic Jaffe features.

"It wasn’t the typical Hamptons house," says Mark Biderman, 75, a financial consultant and corporate director. "The wood and colors made it feel like a home, not a showpiece."

Jaffe designed many houses on the East End near the ocean, and the sloped roof, room proportions, light on the interior and cedar paneling in this home all were part of his signature style. "It’s the typical Jaffe shape with a long roof," Biderman says. "He tried to mesh the houses with the earth and the sky."

The Bidermans bought the 4,300-square-foot house, which sits on 1½ acres, in 2002 and have enjoyed it with their children and grandchildren. They did a total renovation in 2004, adding a garage with a bedroom above. "It fit our needs very well, particularly during the pandemic, where we used it full time," Biderman says.

While he describes his home as "livable and warm" and practical for aging in place, Biderman appreciates the individuality of the architect’s imprint. "It’s so different from the cookie-cutter houses built now,'' he says.