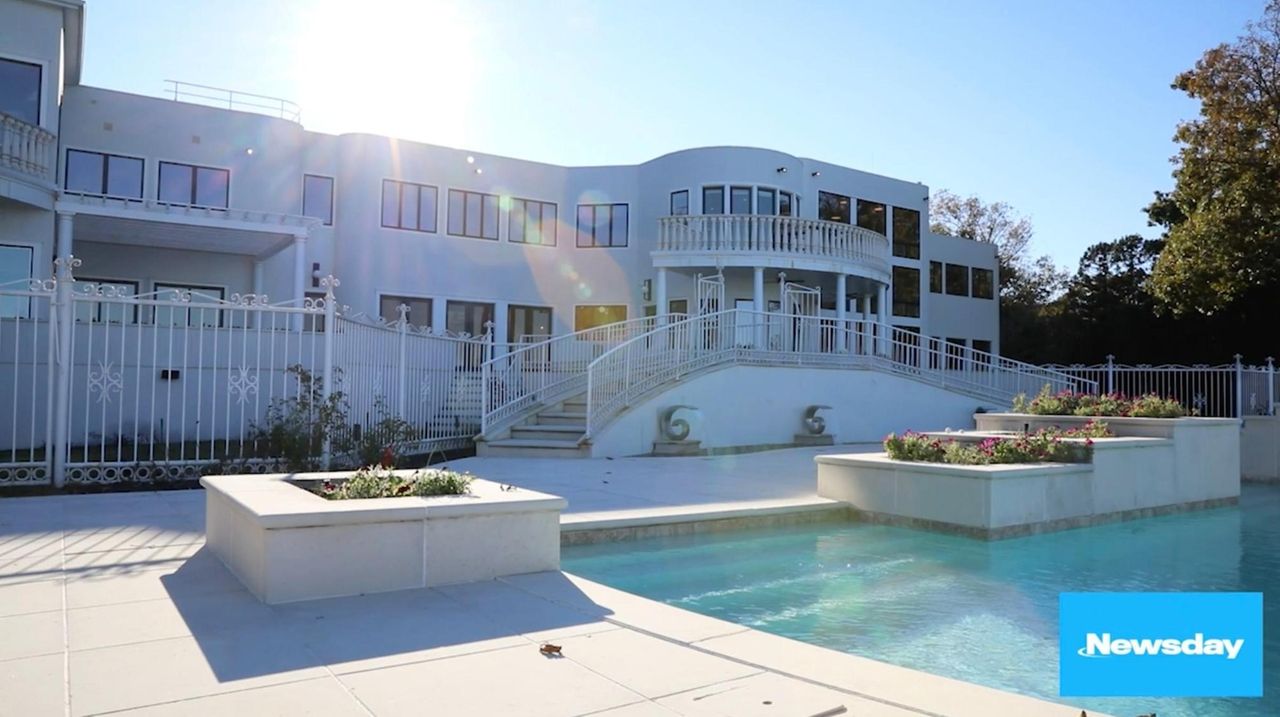 Atlantis Manor, an ultramodern mega-mansion, is perched on a bluff over the beach and has views to the ocean. Credit: Morgan Campbell

When Richard Schwag was a teenager, he and his cousin used to climb into the woods overlooking the tennis court Marilyn Monroe would play on while visiting Amagansett — little did the boys know that Schwag would one day own the nearby house in which the star used to stay.

Amnon Shiboleth lives in a Westhampton Beach village mansion designed by someone you could say wrote the book on what it takes to make a house beautiful — the architect was a founding editor of House & Garden magazine.

And for generations, Muffie Potter Aston’s family has lived on a spectacular Locust Valley estate that helped put Long Island on the worldwide map by serving as inspiration for F. Scott Fitzgerald's classic novel "The Great Gatsby."

These homes are among a record number of Long Island residential properties for sale for $5 million or more that experts say are part of a new luxury niche market that includes homes with bells and whistles ranging from celebrity connections to private helipads to amusement-park-like amenities.

The number of homes in the Hamptons that sold above $5 million during the third quarter of this year was the highest it has been since 2006, with some properties listing for more than $100 million, according to an October report by the Manhattan-based appraisal firm Miller Samuel.

"The way to think of it is the pandemic was the pivot point," says Jonathan Miller, CEO and president of Miller Samuel, which gathered the findings in conjunction with Douglas Elliman, the largest residential real estate firm in the metropolitan area. "Prior to the pandemic the high end [market] was weak; after the lockdown ended that flipped, and there was a disproportionate number of high-end sales, creating a luxury niche market."

The pandemic prompted many wealthy Manhattanites to head to the Hamptons and the North Shore, which they viewed as havens ideal for a "second primary home," Miller said.

So, what can you get in this luxury niche market? Here's a sampling:

This grand 12,000-square-foot waterfront mansion listed for $5.918 million in Hewlett Harbor includes a primary en-suite bedroom reached via elevator, but one of its most eye-catching features is a giant chessboard built into a floor.

"The house was built all based on the idea of togetherness and family," says Ilana Kiselman, who owns the home with her husband, Gene. "My grandfather played chess, and I had fond childhood memories of playing with him when I was young, so I wanted to bring a piece of him in to my kids’ floor in my home with the hopes that they would have the same fond memories playing together."

Known as Cashelmara and before that, Bogheid, this 20-bedroom Gold Coast mansion listed for $8.5 million in Glen Cove was built by William H. Porter, partner of financier J.P. Morgan, for Porter's daughter, Helen Porter Pryibil. It was designed by the famed Beaux Arts architectural firm Delano and Aldrich. "They spared no amenity, including an indoor tennis court, bowling alley, and speakeasy-style pub," says Denise Carey Bettencourt, whose late father, Martin T. Carey, once owned the estate.

Bettencourt adds, "The main staircase, for which the design firm was renowned, was showcased in the original film 'Breakfast at Tiffany's,' and the pub was dubbed the Trophy Room, where the sportsmen would return to display their prowess after a hunt on the original 127-acre property."

In the listing for this 9,464-square-foot Colonial in Old Westbury sitting on 3.7 acres that is on the market for $8.345 million, the property is described as a combination of "a custom residence, a resort, the ultimate vacation, summer camp, and a top-notch country club." A go-cart track with three go-carts in their own garage, tennis, beach volleyball and shuffleboard courts, a batting cage and raised par-3 golf hole with driving net are some of the wow attractions here.

"Our dream at 50 Applegreen was to create a sanctuary for our family and friends to gather and for 20 years everyone has come to us and they never want to leave," says owner Scott Paston.

Many Long Island mansions boast water views, but in this five-bedroom, 10,684-square-foot home with a floating 50-foot dock in Old Field listed for $9 million there are floor-to-ceiling windows from which a variety of bodies of water can be seen. "Looking out from the kitchen and dining room you can see Whitehall Beach, Long Island Sound, Conscience Bay, Port Jeff Harbor and Connecticut in the distance," notes listing agent Dina Powers of Signature Premier Properties.

The architects "were very particular about there being views from every room and what you could see, says owner Ross Blechman, who describes Old Field as a well-kept secret that offers a Hamptons-like experience. "This is the North Shore of the Island for people who don't want to fight the hustle and bustle of the East End."

An elegant double-sided staircase and 30-foot ceilings greet visitors to this modern 20-room mansion known as Atlantis Manor set on a lavish gated 8.2-acre compound that is on the market for $9.75 million in Belle Terre that has four separate subdividable lots. But the true bells and whistles are its 25,000 square feet on a secure cliff with a private helicopter pad, and an open view of the Atlantic Ocean with direct access to the beach.

"The best way to describe this place is heaven on earth — with skylights throughout and a helipad perfect for an individual who wants complete exclusivity and privacy," says listing agent Luciane Serifovic of Luxian International Realty in Manhattan.

The fame factor can help drive the price of a property through the roof. Here are some on the market that share that special spotlight:

Built in the 1800s, this former working windmill that is on the market in Amagansett for $11.5 million was converted into a guesthouse by Samuel Rubin, founder of Faberge Perfumes. During the late 1950s it became an escape from the glare of the press for Marilyn Monroe and her playwright husband, Arthur Miller. Other notable visitors included writer Kurt Vonnegut and actor Terence Stamp.

"It’s a magical place and you can't see it from the road," says Douglas Elliman listing agent Bobby Rosenbaum.

Located in Westhampton Beach village, Meadowcroft-- the last remaining Long Island home built by noted architect Wilson Eyre, one of the founders of House & Garden magazine-- is on the market for $13 million. The updated 9,000-square-foot mansion was built around 1904 as a summer cottage for industrialist Theodore Conklin. Conklin's family owned the property for five generations, and many of the original details remain, such as bespoke fireplaces and a butler's pantry.

Owner Amnon Shiboleth says that when he first saw the home with his wife at the time, "We couldn't believe what we had seen — it was like something from a century totally lost."

Frequent guests to this 32-acre Gold Coast waterfront Locust Valley estate listed for $28.5 million included F. Scott Fitzgerald. It has been home to only two families since 1929.

"I must admit there are times I pinch my cheeks when I realize the history that has roamed the halls of Lands End Manor," says owner Muffie Potter Aston. The property was originally owned by Helen Whitney, an heiress to the Whitney paper fortune, and her first husband, George Galt Bourne, a Singer Sewing Machine Co. heir.

"They entertained lavishly and lived in a very grand way," Aston says, adding that it was during the Jazz Age that Fitzgerald visited. "The doors to Lands End were flung open to entertain, particularly through the summer months as there would be a cool breeze coming off the Long Island Sound. It was in those days that F. Scott Fitzgerald was living on Long Island."