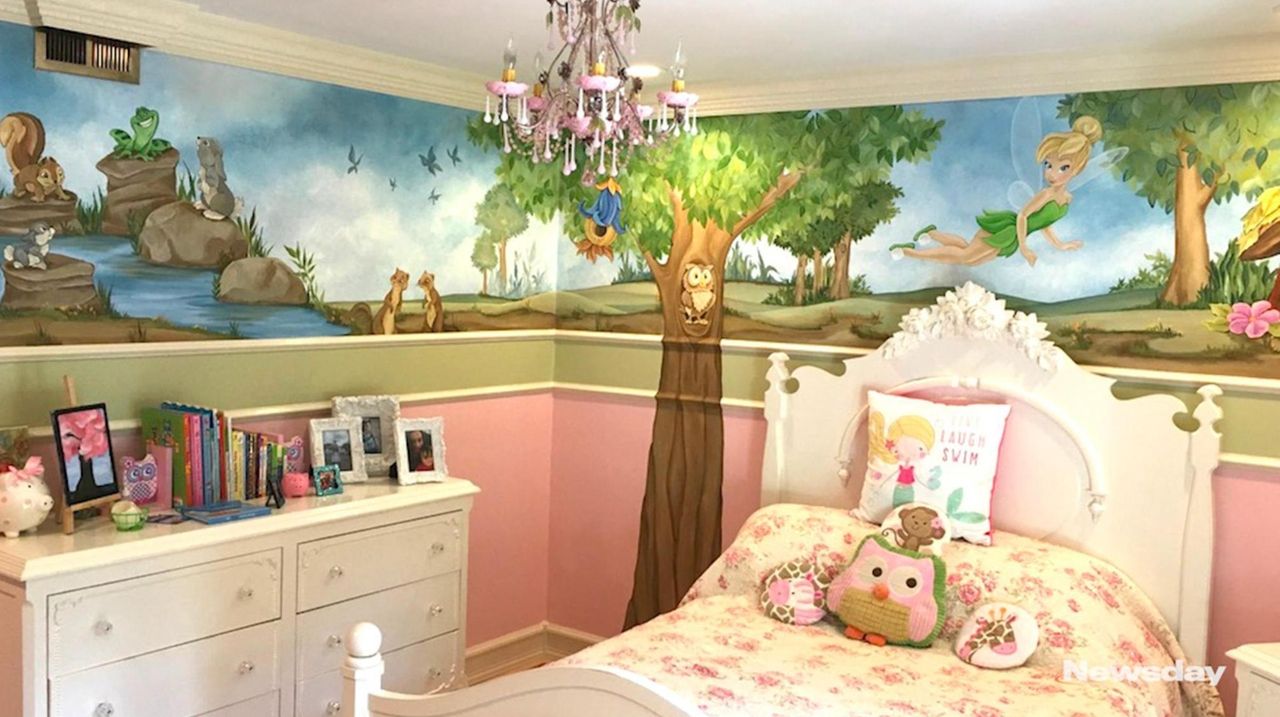 Mural artists Donna Greenfield and Talik White talk about what goes into creating and painting a mural and Greenfield discusses what she has had to do during the pandemic to adjust. Credit: Newsday / Reece T. Williams; Johnny Milano

When Talik White designed a mural for Michelle Miller’s game room in Ridge in October, the space seemed to grow. The blue in one section of wall matched the pool table, the green reflected the pingpong table and yellow and black the foosball table.

"There’s an abstract zigzag to split them off," White, 35, of Amityville, said. "It makes it feel like three different rooms."

"This is a room without walls," Miller said. "He made walls with his artwork."

Murals can be abstract expressions or follow themes — depicting action scenes and superheroes in playrooms and restful, idyllic environments in bedrooms — a splash of art without a frame.

"It adds perspective, dimension to the home," said Vanessa Baird-Streeter of a geometric mural White did in her Dix Hills home. "It’s thought-provoking."

Murals can influence moods and set a tone, said Donna Greenfield, of Nesconset, who has been creating murals for 20 years.

"It changes the whole look of the space," said Greenfield, who is in her forties. "It shows the house is special, treated well and taken care of."

She said that after a lull due to COVID-19, demand picked up as people sought to make home improvements and incorporate murals. "It gave people a lot of ideas on how to upgrade their home," said Greenfield, who owns Green Street Custom Designs in Nesconset.

Parents considering murals for their infants’ rooms may want to reach out to muralists months in advance, so the walls are ready, Greenfield said.

"People want the nursery they always dreamed of," she said. "They want it to be beautiful, soothing, calming." Color schemes often coordinate with furniture, bedding and rugs. Some homeowners like their kids to see sports, cartoon characters or picket fences and flowers.

Children outgrow some designs, but parents "may want something the baby won’t outgrow," Greenfield said.

"It goes according to the personality of the child," said White, who has been painting murals for three years. "I can make them feel like they’re part of the cartoon or video game they love."

Greenfield's murals take an average of three to five days to complete. She does a spot mural — on a portion of a wall — in a day and has labored on larger ones for as long as three weeks. Spot murals look better on lighter colors, Greenfield added, although she has done murals on darker walls.

A mural can be a great gift. "Sometimes it’s a birthday or holiday gift," Greenfield said. "It’s usually just because they want to redo the room."

It can get complicated when there are two or more children to a room. "I have to come up with a plan that makes sense, but doesn’t look like two separate things," said Greenfield, who often shows children sketches before doing a final project. "I have to please them all."

As for adults’ game and movie rooms, they can be a field day for muralists. "A game room creates a vibe, not just for games, but parties, game nights," said White, who owns a company called Trew Colors NYC.

Colors, lines and shapes can add kinetic energy. "Those are a lot of fun," said Greenfield. "That’s where I can get really creative." She paints mock movie posters, movie scenes and games.

White helped convert Michelle Miller’s garage into a gym, with a treadmill, stationary bike, other equipment and walls that are black, red, white and gold. "It’s very eye-popping," Miller said. "The colors give you more energy."

Miller’s garage gym sports a heart and a BMW logo — a token to her favorite car.

Greenfield has done murals in powder rooms, bathrooms and half-bathrooms, adding decorative finishes. She did a mural in a boy’s bathroom with blue-and-white graffiti, including initials, matching the colors of the towels. "Everything gets color-coordinated," Greenfield said.

Clockwise from top left, three murals by Donna Greenfield: "Treehouse," a preschool design; "Grandkids' Jerseys," for a boys room; and another sports mural for a boys room; third row from left, "Candy and Grandkids," a basement play area decoration; and Donna Greenfield in front of her mural for a car show in Oyster Bay (all photos by Green Street Custom Designs/Donna Greenfield) and an abstract design by Talik White (photo by TREWColors NYC/ Talik White); bottom row from left, two more abstract designs by White and White in the basement of a Ridge home where he did the mural (photos by TREWColors NYC/ Talik White).

White painted a straight line in one bathroom, rising from a toilet to the ceiling that gave it a unique look. "It’s kind of fun and it’s art," he said.

Muralists don’t just do walls — sometimes they do ceilings as well.

"Instead of stopping at the top of the wall, I keep going," White said. "The design travels from the wall to the ceiling." He might draw a tree on the wall with leaves and branches stretching to the ceiling.

Greenfield has done day and night skies filled with stars, clouds and birds. They used to be popular, but aren't anymore.

Ceiling murals often are more abstract, she said. "Everyone’s going modern," Greenfield said. "I do a lot of metallic ceilings."

Also out of style are murals depicting the outdoors, Greenfield said. Children’s rooms often fill with scenes. "They want to look at scenes, characters, favorite things to do," Greenfield said. She still does some scenes with hills, grass, flowers and trees for children’s rooms along with lighthouses, beaches and rainbows, but fewer than in the past. "It’ll be back," she said. "Every 10 years things come back."

There are opportunities for outdoor murals beyond actual walls. A wooden fence that’s an eyesore can be the perfect surface for a mural with flowers and butterflies. "You can do part of a fence or a whole fence," Greenfield said.

She even painted a mural of a lighthouse with water on a metal vent. She retouched faded exterior brick, stone and tile.

"I can match what their brick looks like and redo sections that faded or darkened," Greenfield said.

Exterior murals, however, are not as durable as those painted inside, which should last forever, said Greenfield, who uses latex wall paint, the same type of paint used to paint walls. "The only time it would require retouching is if the wall was damaged,'' said Greenfield, whose murals range from $500 to several thousand dollars, depending on the size, detail and other factors.

"All my murals are still in good condition," said White, who uses PPG brand paint with metallic tones, as well as regular paint used in homes, such as Behr, Sherwin-Williams and Benjamin Moore.

White sometimes paints a frame on the wall with a painting in it. "Instead of buying a canvas painting, it’s like the artist came and painted the canvas on the wall," he said. Muralists also do paintings on surfaces (like canvas, wood or metal) placed on walls, rather than painting on walls. That creates a kind of mobile mural. "Anything that can be done on a wall can be done on a canvas," Greenfield said.

While murals are the product of the artist, they also need to reflect the resident’s tastes. "I go for the vibe," said White, whose custom designs start at $850. He did a mural for an ER nurse including a heart and a Red Cross symbol.

Murals can lift spirits. "When you walk into your home and you see art, you feel better," White said. "It doesn’t fix all your problems, but it adds a light to your life."

Stairs are usually for walking on or bounding over.

But the ones in Stacey Pinto’s home that lead to a playroom take the family back in time.

The Huntington resident hired Donna Greenfield to paint a book cover on each of the steps, to depict her son's journey as a reader.

"You start with ‘Goodnight Moon’ and you end with ‘Harry Potter,’" Pinto said. "As the stairs ascend, so does the reading level."

The stairs look like stacked books, Pinto said. "I’ve always been a reader. And my son’s a reader. It worked for our family."

Other Long Islanders, too, have found that staircases can become a canvas for the imagination. Talik White turned a staircase in Vanessa Baird-Streeter’s Dix Hills home into a wall filled with geometric images.

"Walking up the stairs makes me think differently," Baird-Streeter said. "It’s a different pattern in my home." She finds the wall "a foundation for creativity," she said.

Visitors walk up what looks like a staircase with books such as "Charlotte’s Web," "Peter Pan," "Children Make Terrible Pets" by Peter Brown and "Just Only John" by Jack Kent.

"I selected the books meaningful to me and my son and we took it from there," Pinto said. "They’re exact replicas of the books."