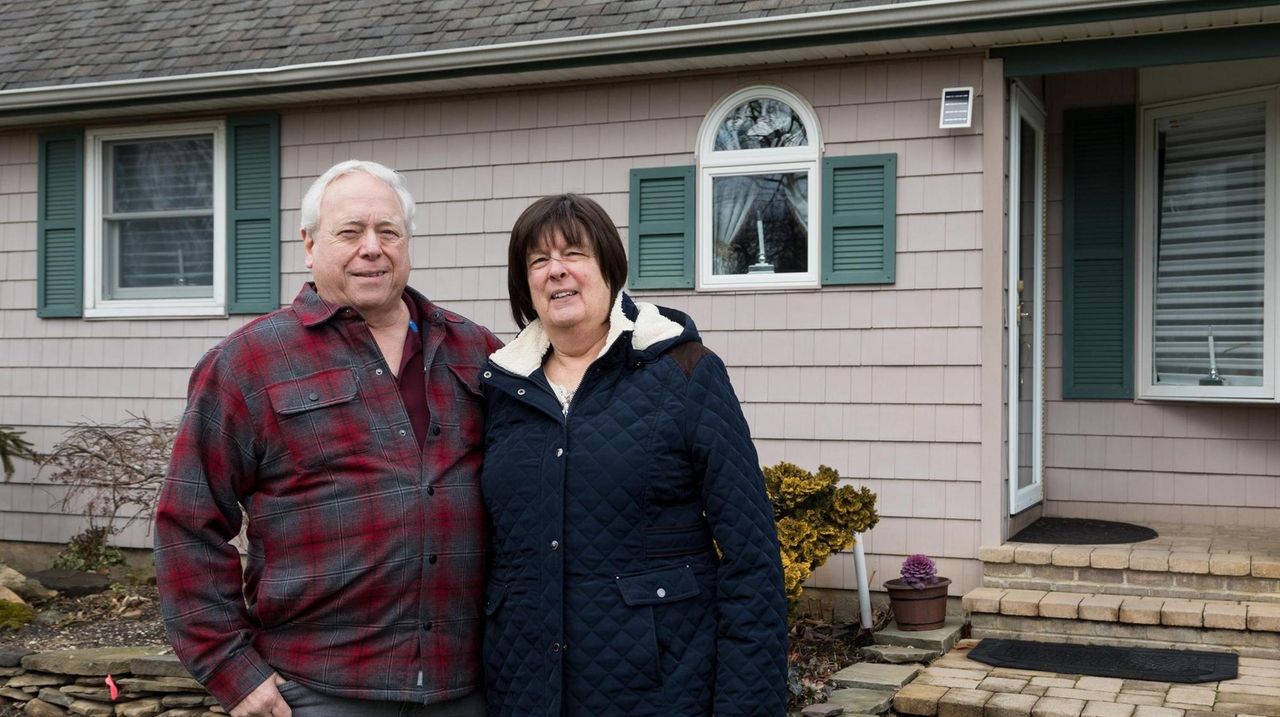 Bonnie and Tom Evans of Shirley talk about how the neighborhood has changed over the past 50 years and show us around to explain what it was like before. Credit: Barry Sloan

When Bonnie and Tom Evans bought their newly constructed Shirley home in 1972, the town was a quiet place with one deli, one restaurant, and a nearby bait-and-tackle shop. William Floyd was a two-lane road leading from Sunrise Highway to Smith Point Beach.

The big draw, other than the lower house prices compared with other parts of Long Island, was the natural beauty. Not yet built out, the area around their home had woods, a place where Bonnie Evans says, "the kids would build forts" and ride their bikes with few limits.

"There were always a lot of kids around," Tom recalls. "It was free and easy living for the kids."

Bonnie and Tom spent most of their childhoods in Bay Shore. After they were married, they looked to move west on the Island, but decided to settle on Probst Drive in Shirley, where they were able to get a new home for $29,990. Later, they did what other neighbors did — expand their home. They added a large kitchen, a great room and a swimming pool.

Parkland down the block

Many parents worked in New York City, either taking the train or driving the 65 or so miles. On their block alone, there was an FDNY firefighter and a welder who commuted to the city, and Tom, who worked nights as a nurse anesthetist in Far Rockaway Hospital, now called the St. John's Episcopal Hospital, would drive the two-hour reverse commute.

For Tom, it was worth the hassle, for his wife and three children. Wertheim National Wildlife Refuge, a 2,500-acre nature preserve with the impressive Carmans River running through it, was down the block from the Evans home. It was mostly passive parkland at the time, and the family would often spend afternoons on the walking trails there spying deer and foxes.

Also nearby was Southaven Park, where the Evans family would take their children to ride the ponies, which are no longer there. The park drew national attention when it was later rumored to be the site of an alleged UFO crash in 1992.

History abounds as well. The sprawling estate of William Floyd, one of the original signers of the Declaration of Independence and a slaveholder in Mastic Beach, is the site of school field trips. Many of the community’s schools are named after Colonial leaders — Tangier Smith Elementary after a 1700s landowner, and Nathaniel Woodhull, a brigadier general in the New York Militia during the American Revolution, for instance.

But for children growing up in the 1970s and '80s, the beach was a big part of their lives. Often, Tom Evans would often take a gaggle of kids — along with his own — to the beach for the day, and later as teenagers, his kids would ride bikes with their friends to the shore. Daughter Jennifer Evans, now Bila, remembers hamster races in the King Kullen parking lot, all of which was life in a small town.

"We would have sleepovers at the beach all the time," says Bila, who now lives in Miller Place.

A beach and a library

Unlike its neighbors farther west on Long Island, Shirley didn’t get the large shopping malls or chain restaurants during the 1970s and 1980s or large entertainment places. Like many kids at the time, Bila took gymnastics classes at 5 years old from a couple at a nearby home in Mastic instead of the usual gymnastic schools. She later went on to compete, making it to the New York State gymnastics competition in the fifth grade, and in high school.

Kelly McMaster, assistant professor of English and director of Publishing Studies at Hofstra University and author of "Welcome to Shirley: A Memoir from an Atomic Town," says that the lack of public planning — no Main Street for instance — was the reason the beach and the local public library became a community hub, places she rode her bike to as a kid and worked as a teen.

The reasonable cost of living and natural beauty turned the Shirley/Mastic area into a thriving suburban family community in the mid-1970s when the Evans children were growing up. The William Floyd School District passed a $13 million bond in 1973 to build two new elementary schools and a middle school to relieve overcrowding in its existing four schools — already on double sessions and housing students in portable classrooms.

Bonnie and Tom Evans saw the neighborhoods grow exponentially over the decades, with new homes coming up over the years. Even lately, they have seen a large number of young people moving in. "Houses are popping up all over," Tom says.

While many parents headed west for work, Brookhaven National Laboratory, the home of the soon-to-be shuttered heavy ion collider and future home of the high-speed atom smasher, was also a big employer, under a shroud of mystery, locals say.

Situated on William Floyd Parkway in the Upton area of Shirley, the laboratory employs 2,500 people, many of them highly skilled scientific positions. The former Camp Upton military training facility has had its share of environmental hazards, including a toxic plume from decades ago, which has been in remediation ever since.

Bonnie Evans remembers a time when she accidentally turned into the entrance and was told by a guard at a booth to turn around.

"They have done amazing things, positive things," says McMaster, whose book centers on the secrecy of the federal nuclear research center. "But at the time I lived there, it was a secretive place…. It was a hard neighbor to have."

While the plant may be a worry because of the work being done there, it has also embraced the community with its student field trips and community events.

Finding land to build on is scarce, and new houses sell immediately, according to real estate agent Gina Walter, a third-generation resident, who has been selling Shirley homes for more than 20 years.

"I have a waiting list for new construction for Shirley," she says. "We are seeing a lot of younger families … I get a listing and it flies off the shelf in days."

Many are coming from the city due to the pandemic, much like what is happening in other parts of Long Island, and like homes with reasonable prices close to the beach.

Like the Evans couple, many have stayed in Shirley for decades, and some are even second- or third-generation residents.

For Bila, now a mom of three kids of her own, growing up in Shirley gave her and her friends a sense of freedom. "It was different," she says. "Everybody knew everybody. We knocked on each other’s doors. When we were bored, we played kickball or climbed trees." They rode their bikes to the nearby candy store, she said. Parents didn’t plan every moment of their days. It was freer and easier.

"It feels like our generation was the last to have that," she says.

Shirley by the numbers