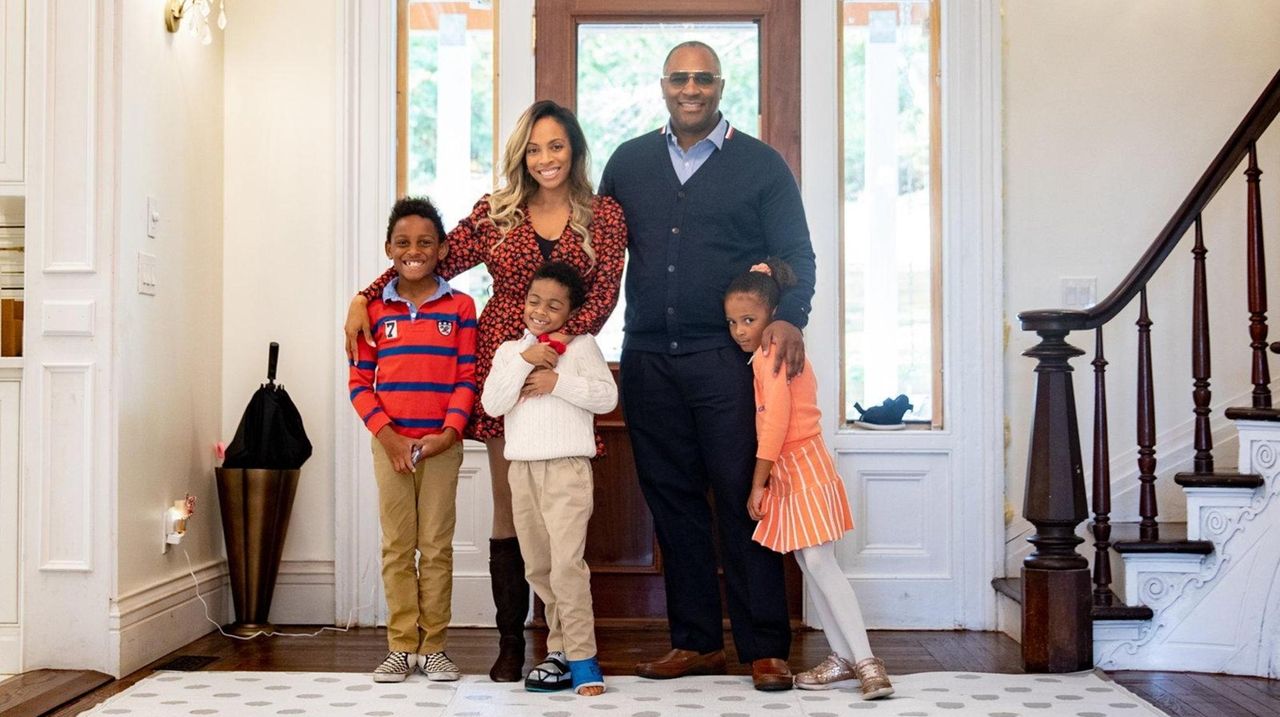 When Jamie and Frantz Arty bought a stately Colonial-style house in 2018 they didn't know it was once owned by a prominent New York abolitionist and judge. Tour the home and see the renovation with Newsday's Faith Jessie. Credit: Newsday / Raychel Brightman and Reece T. Williams

Any homeowner renovating a historic property knows there's a possibility of discovering a surprise or two lurking behind the walls. Water damage, mildew, faulty wiring systems and more are not uncommon. But the surprises may be more than expensive or hazardous. Sometimes, they're painful reminders of generational trauma.

Jamie Arty, 40, and her husband, Frantz, 41, a tech engineer, are restoring a circa 1834 mansion in Oyster Bay, where they live with their children, Gigi, 7 and 5-year-old twins Fitzgerald and Fallon. When they purchased the stately Colonial-style house in 2018, the African-American couple was apprehensive about previous owners and the house's history.

"Were they enslavers? What side of history were they on?" Jamie Arty recalled thinking.

But they soon discovered that their new home had once been owned by a prominent New York abolitionist and judge, William Townsend McCoun.

Several months into the renovation, Jamie created a Facebook group to keep family and friends updated. The group, Making Over a Mansion, quickly grew, and it now has more than 30,000 members from around the world. She started an Instagram account around the same time (@making_over_a_mansion).

In addition to documenting their restoration work on the property, the family also posts about the home's history, including interesting finds and photos of famous 19th-century guests. They are uncovering the past in more ways than one.

The couple, whose followers have grown to love more than just the house, also share updates on their family and lifestyle. Jamie, who was an event planner before the pandemic, showcases the elaborate holiday decorations that adorn the mansion each season. In 2020, she created a business around her fun, over-the-top décor.

"I had to make a left turn, since no one was throwing parties anymore," she says.

The Artys stumbled upon the 10,000-square-footmansion when they were house hunting and made a wrong turn. They pulled into a driveway to look at their map and saw the dilapidated house with a guesthouse behind it.

Without going inside, they called the real estate agent listed on the sign out front and began negotiations to purchase the property, which, at the time, was entirely uninhabitable.

The couple were unable to obtain a mortgage on the property, so they paid $800,000 cash for the house. "We just did it blindly while the kids were screaming and crying," Jamie says.

She wanted a fixer-upper, but she wasn't prepared for the scope of this project. The house had stood empty for several years before the family found it; a fallen tree had left a gaping hole in the roof, and the interior was packed to the rafters with collectibles and garbage. Evidence of trespassers — candles, Ouija boards, empty beer cans and cigarette butts — littered the space.

The couple renovated the guesthouse over 11 months in 2018, and they moved in with Frantz's parents while they worked on the main house. In March 2020, they finally moved into two floors of the mansion, which were marginally completed.

Shortly after, the pandemic struck, and Frantz's father died of COVID-19. The family's loss cast a pall over everything, but they used the time at home to complete more renovations.

They tackled the kitchen first, turning a dark, enclosed space into a bright, airy expanse with classic white cabinetry, light counters and a marble backsplash. The fireclay kitchen sink features an embossed apron front and bridge faucet, in keeping with the home's history. The original kitchen fireplace, discovered enclosed behind a wall, has been restored and repurposed into a brick pizza oven.

The Artys chose bright colors for the other main rooms. The dining room is a sunny yellow.

A portion of the expansive room was originally an outdoor space, and uncovered siding showed that it had once been a similar color. "We will just modernize it a little bit," Jamie says.

Choosing a similar color felt, to the couple, like paying respect to the home's history. The front living room is a cool blue. Afrocentric art adorns the walls, and white wainscoting provides visual detail to draw together the massive space.

Although their main living space is complete, the Artys have many more rooms that are untouched. This includes a few they can't safely enter, because they're in an advanced state of disrepair or are filled with century-old items. The back staircase is still in its original state, with a domed brick ceiling and rough wooden treads, a testament to the domestic staff required to run such a large home.

Unearthing the house's rich history has been an unexpectedly rewarding byproduct of the renovation.

The family has been enraptured by the story of McCoun, who lived in the house until his death in 1878. The home was once called the Chancellor's Mansion, as McCoun was first vice-chancellor of the New York court of chancery.

"He was so progressive. He was a judge, a lawyer. He helped a Black soldier from Long Island who was supposed to be compensated for serving in war but never received his due," Jamie says. "I am now good friends with the great-great-great-granddaughter of that soldier … That is full circle."

Described by the New York Historical Society as "a patron of the arts and a friend of many artists," McCoun entertained a lengthy list of celebrities in his home, including Charles Dickens and a young Theodore Roosevelt.

Sophia Moore, a former enslaved woman, is buried mere feet from the judge on the Artys' property. She was born in 1786 in Morristown, New Jersey.

The inscription on her stone reads: "In Memory of Sophia Moore, died 1851, aged 65 years. Born a slave in the State of New Jersey, bought her freedom and for 25 years was a faithful friend and servant to the family of William Townsend McCoun."

In the 1800s, even cemeteries were segregated; to include Moore in the family plot was a significant gesture. Jamie and Frantz work hard to highlight Moore's role in the household as they restore the mansion.

Leslie Antonoff, a Black designer who is the Los Angeles-based lifestyle blogger behind Hautemommie and co-host of the upcoming HGTV series "Divide and Design," said large-scale renovations, such as the Artys' mansion, are uncommon undertakings for Black people. Yet, what they're doing is important, Leggs said, and their visibility provides needed representation.

"African Americans can reclaim historic spaces and narratives to create new forms of power and healing for themselves and their community," Leggs said. Historic sites contain what Leggs calls "cultural memory," and he urges restorers to learn from the preservation of each site — even if what they learn is painful.