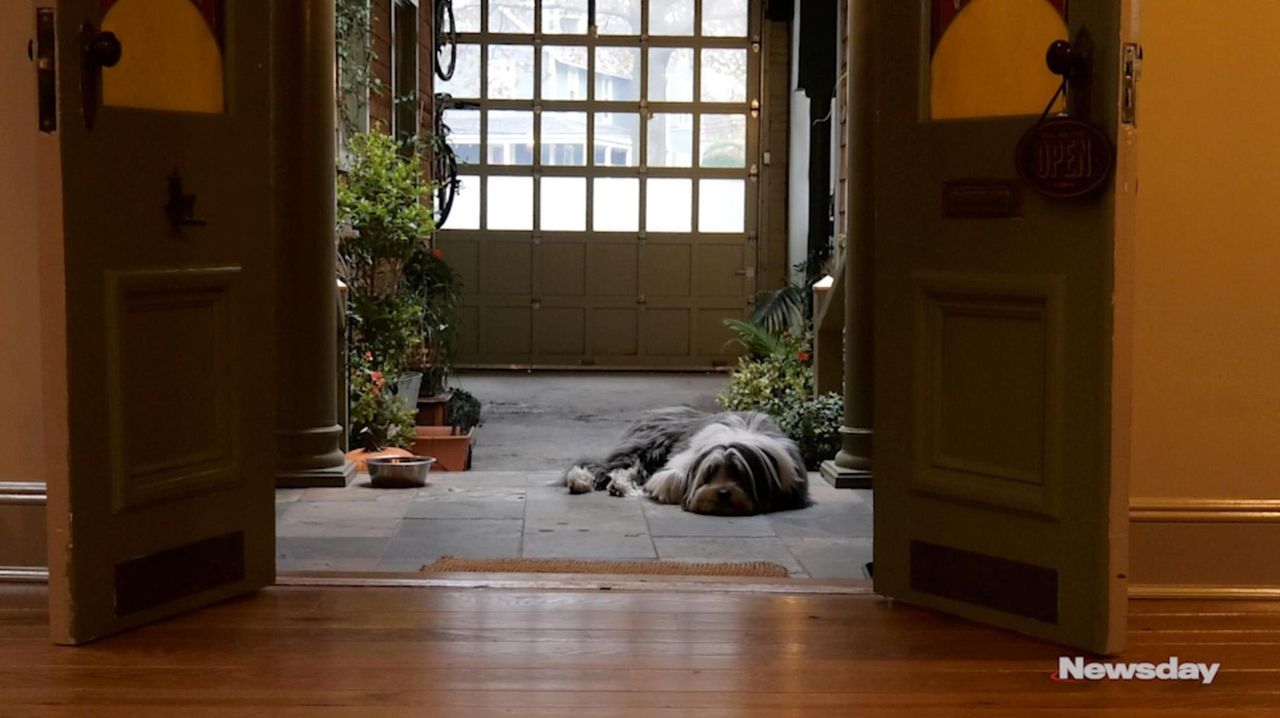 "A house within a house," is how Lesly, of Sea Cliff, explained the unique home she and her husband bought about seven years ago. She gave Newsday a tour of her home on Thursday, Nov. 22. Credit: Newsday / John Paraskevas

As a longtime Glen Head resident, Lesly had often passed the warehouse garage on the corner of a leafy neighborhood in nearby Sea Cliff and wondered what it was. Obviously, it had been transformed into something different from its original use. But what? Then, six years ago, she and her husband sold their residence and began house hunting. She noticed a “For Sale” sign on the warehouse. They knocked on the door and discovered what was inside. It was a house. Within a house.

Strange? So, was their reaction.

“Two seconds after we walked inside, I knew it was going to be ours,” Lesly says.

Over the next five months, she and her husband, Lenny, who requested that their last names not be used, reconfigured parts of the interior to create bedrooms and closet space. Most of Lesly's friends thought the move was unorthodox considering first impressions. Point taken, Lesly admits.

Step inside and that perspective changes. The garage entrance that houses one of the family cars remains at the front, but the walled-off space to the side has been turned into a spacious entertainment area — also the hangout of their bearded collie, Nella.

Proceed inward and you come to the “house in a house” part — the shingled facade of a conventional home complete with steps and a doorway flooded with overhead light from a Plexiglass-paneled roof.

Inside is a vast living room joining a gourmet kitchen. Lesly and Lenny are pizza lovers and had a pizza brick oven built. Behind this is a bay-door garage for another car, which has an open roof toward the rear and a covered courtyard area to the side. It has a large teak table, wicker furniture, a TV and BBQ grill. "In the summer, we're out there every night," Lesly says.

The whole structure takes up the .11-acre lot, except for a strip of grass on the west side.

With its cavernous spaces, 15- to 25-foot-high ceilings and five rectangular skylights scattered throughout the rooms, it could easily be mistaken for a luxurious Manhattan loft.

“We have loved every minute here,” says Lesly.

The structure, built in 1925, is somewhat shrouded in mystery, says Peggie Como, director of the annual Sea Cliff Holiday House Tour, which includes the warehouse residence for the first time. Apparently, its earliest manifestation was a doctor’s office, she says. Then, it became a glass repair place, possibly when the two-bay garage doors were installed. At one point, it was a business that sold car manuals. After that, it was purchased by an English author who created its domestic interior. The last former owners added more details to make it a home and filled it with a car collection. It was housed in the two garage areas, which were larger then since they didn't include the two spaces now converted into living areas.

Why did the author decide to make it a house within a house? Go figure.

“I don’t know whether it was his idea or the contractor's or whomever,” Lesly says. “Maybe he just had a vision.”

Como has been trying to get permission to show it for 16 years, she says.

“When I tell people it’s on the tour, they say, ‘I’ve been dying to get into that house.”

The dwelling is completely different from the three-story Colonial on a secluded 1½-acre lot in Glen Head where Lesly and Lenny used to live, Lesly says. But the two were ready for a low-maintenance lifestyle within walking distance of a downtown.

“Sometimes you need to change things up,” she says.

Still, she hasn’t quite gotten used to the notoriety that goes with it, she says.

“Whenever I’m outside, people stop and say, ‘You have the coolest house in Sea Cliff.”

The 17th annual Sea Cliff Holiday House Tour will be held from noon to 4 p.m. Dec. 7. The event will feature six homes — including the house within a house — all decorated for the holiday season. Tickets for the self-guided tour are $40 with the proceeds going to charity. It includes a light buffet lunch and post-tour complimentary appetizers at the Metropolitan Bistro. Tickets are available at Sherlock Homes Realty, 305 Sea Cliff Ave., Sea Cliff. For information, call 516-671-1717.