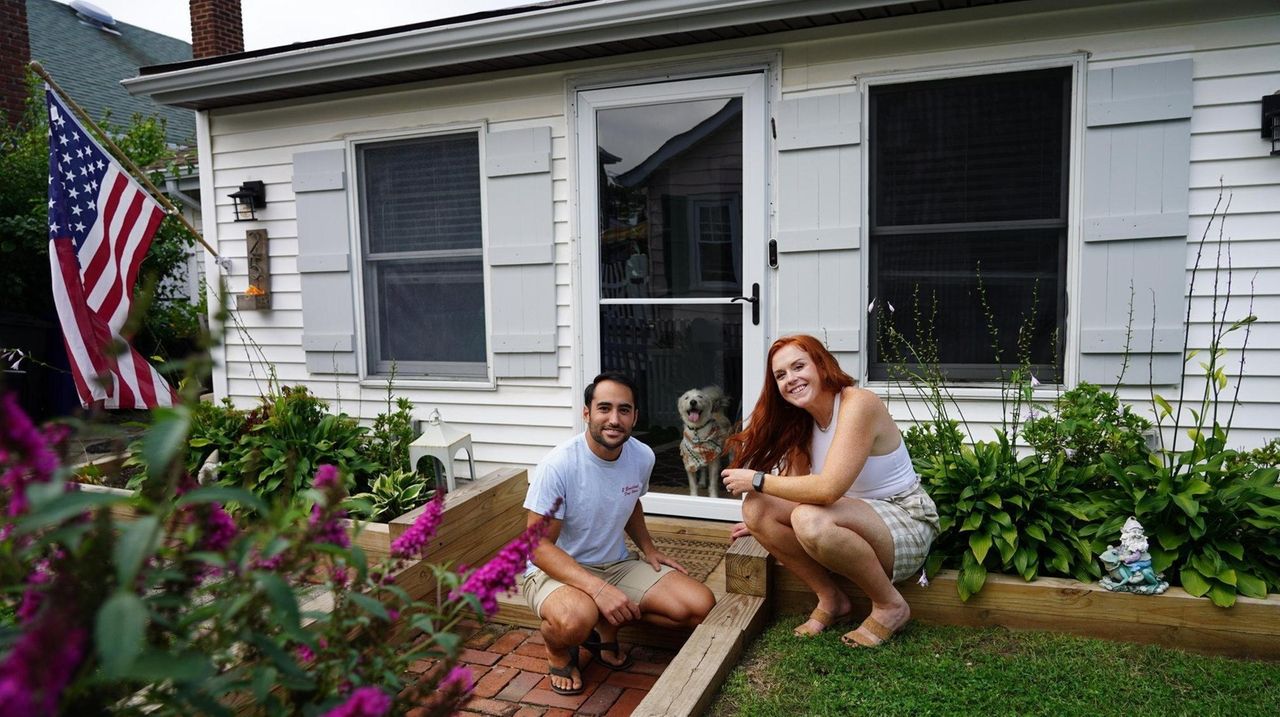 Shane Hassin and Megan Long say the positives outweigh the negatives when living in a small home in a community like Long Beach. Credit: Debbie Egan-Chin

You can call it diminutive. Perhaps modest. Just don’t call it cozy.

"People say that to us all the time, but to me that’s saying it’s small," says Alexandra Martinez, who lives with her partner, Brian Leverton, in the limited comfort of a … er … petite 1,200-square-foot cottage in Centerport. The distinction is important for the couple. Of course, it is physically limited, but to casually place it in this category trivializes their choice.

Forget cozy. This is home.

"We love this place," says Martinez. "We never want to give it up."

This is not an unusual attitude for those who live in the bungalows, cottages and assortment of undersized homes that can be found in various communities sprinkled throughout Long Island.

"This is perfect for this time in our life," says Shane Hassin, who lives with his wife, Megan Long, in a 1,176-square-foot bungalow in a unique section of Long Beach. "We see people our age who have a big house and expensive cars and are stretching themselves to keep up with the Joneses. We don’t have to deal with that. Here it’s about enjoying what you have."

Although hard to document, empirical evidence suggests Long Island has more than its share of homes such as these. This is based on the fact that from horse-and-buggy days it was a hot-weather getaway from New York City, generating numerous summer cottages usually built close to water. Bay houses constructed by fishermen, baymen and duck hunters have been around for a century. Other additions came when religious movements in the 1800s and early 1900s drew thousands of people to Long Island for summer get-togethers, leaving behind a residue of pixie-like homes in places like Sea Cliff and North Merrick.

Many are unrecognizable now, having been expanded with extensions or second-floor additions, but settlements of this size still can be found.

Small homes are about 1,200 square feet, according to Lloyd Kahn, author of "Small Homes: The Right Size." He also wrote a highly popular book about tiny homes, which are in the 200- to 300-square-foot range, but considers the small home size "much more practical." Today’s average home is about 2,500 square feet, or about 62% larger than in 1973, Kahn says.

"If they have any sense, they are," he says, adding that such residences are better for the environment, easier to clean and typically have lower utility bills.

Leverton and Martinez first glimpsed their residence four years ago when they spotted an open house while driving around Centerport. On the way in, they passed a couple coming out.

But for Leverton, a 36-year-old utilities worker, and Martinez, 33, a school librarian and volunteer historian, it was love at first sight. "It was just the right moment for us," says Martinez. "And it all worked out." They paid $390,000 for their home.

At first glance, it is easy to see why the first couple had reservations.

The front of the 94-year-old home is so pint-sized it is half obscured by Leverton’s black DodgeRam pickup parked in the front yard driveway.

Making the most of their living space has been a project.

They installed IKEA-designed cabinets in the kitchen to expand storage and took out the dishwasher (Martinez says her family didn’t have one growing up so she didn’t see the need) to conserve counter space. Her companion added storage benches in the rear dining area and also built in the dining table. Just inside the living room door is a his-and-hers coat rack, a necessity because there are only two closets. Their bedroom wall can be touched on either side of the bed, which also contains storage drawers.

Peanut the cat lounges on the screened-in porch, which is appointed with framed stained-glass windows and strewn with slogan-laden throw pillows. Occasionally, the couple have drinks there at day’s end and play records by Bing Crosby or Ella Fitzgerald on the Victrola Leverton bought after they moved in. Overall, the interior feels surprisingly habitable. The effect is like walking into a Harry Potter tent where the inside seems twice as big as the outside.

The two plan to get married soon. Martinez points out a line from a poem on the wall that sums up their philosophy.

"Love grows best in little houses …," it says. "We think it’s a special place," she says.

That feeling is shared by Shane Hassin, 30, and Megan Long, 32, a couple of attorneys who occupy a cream-colored bungalow in the barrier island city of Long Beach. The two live in a historic area known as the "Walks," an offbeat neighborhood of modest residences with postage-stamp yards each separated by a narrow walkway. Each of the arm-length "streets" in the 10-block area is named after the months of the year and are within strolling distance of the ocean.

The prefabricated dwellings, built to accommodate military personnel in the early 1900s, initially cost $2,500 and were meant for summer use only. But tenants began sticking around all year. Many added second stories and/or attics, and by the 1970s it was a permanent settlement. Strolling through the neighborhood today there is no denying its amiable feel. Passerbys call out to each other and stop to chat. Backyards stuffed with plastic tree houses, swings and kiddie pools are common, and the shouts of children echo throughout the area.

The Long Beach Historical and Preservation Society presents a plaque to homes that turn a century old. "We get our plaque in three years," says Hassin.

He and Long bought their home in 2019 for $420,000 after living in a Long Beach apartment for five years, which makes their new quarters feel big by comparison, he says. Long says the compact nature of the area creates a close feeling, which is why their rescue dog, Alpaca, knows he can sit out on the front stoop, cadging treats from passing neighbors.

"Everybody knows everybody else," Long says. "We’re always handing tomatoes to each other from our gardens. It’s old school."

The home’s entrance is an enclosed porch with a reading nook and a stationary bike. The combined living room and dining room is dominated by a rock fireplace. The three bedrooms and an attic give an illusion of expanded space, while the backyard is festooned with lights and a table for a vacation vibe.

After all, the beach is their backyard.

This fact is reflected by a surfboard mounted on the dining room wall, indicating one of Hassin’s passions. Another board is affixed to the pantry ceiling, three are outside in a home-built wooden enclosure and four are stored in his wife’s combo walk-in closet and office.

Of course, living in a bungalow does have its limitations. The home fronts a walk with no cars or parking, so the couple has to find parking nearby, which Hassin said can be a "nightmare." Many residents cart in groceries by wagon or have them delivered.

Still, Long grew up in a larger home in Huntington and remembers her father taking two hours to mow the lawn. Here, they do it in 20 minutes using a weed whacker. Long likes the fact that the limited space makes purging clothing and personal items an occasional necessity.

"The more space you have, the more crap you fill it up with," she says. "This forces you to work with what you have."

Both worry about the appearance of another superstorm like Sandy, which destroyed the city’s boardwalk and flooded homes in 2012, including their own, causing $80,000 in flood damage for the prior owner, Hassin says. If so, they probably would rebuild, they say. Another concern is what happens if they start a family. But, Hassin points out, a couple across the pathway from their home raised nine children within the confines of their bantam dwelling.

"If they could fit nine kids in that house," he says, "we can fit a couple in this one."

SMALL HOMES ON THE MARKET

With two bedrooms and two full baths, this renovated two-level cottage on Fifteenth Avenue in Sea Cliff faces a park. The 1,320-square-foot home sits on a 0.06-acre lot and was built in 1922. It has a living room with vaulted ceilings at street level and kitchen and dining room on the lower level, which opens to the backyard. Taxes are $9,253. Vivian Zhang, Coldwell Banker, 516-376-7295.

This updated ranch on Lakeshore Drive in Ronkonkoma, built in 1942, has two bedrooms and one bath contained in 750 square feet of space. It has an eat-in kitchen, great room, an unfinished basement and detached garage on a half-acre lot. Taxes are $10,632. Eric and Christopher Neitzel, DeBarbieri Associates, 631-862-7447.

Built in 1953, this two-bedroom, one-bath bungalow on a quarter acre on Eastport Drive in Sound Beach is up the street from Long Island Sound and has beach rights. The approximately 850-square-foot home has a den, family room and eat-in kitchen. Taxes are $8,793; sale is pending. Allyson Bruetsch, Executive Group Realty, 631-678-7477.