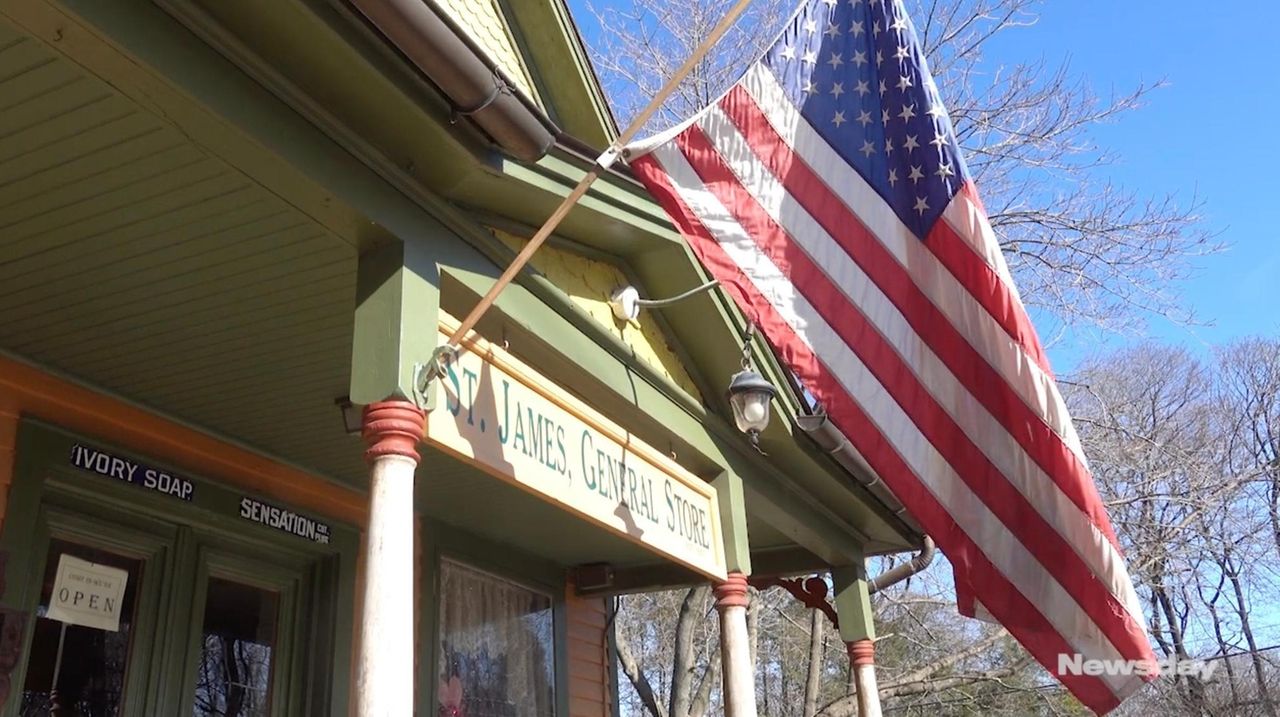 While there are many historic neighborhoods on Long Island’s North Shore, few provide a trip back in time as much as a slice of Moriches Avenue and the surrounding area in the hamlet of Saint James.

The spot is home to the Saint James Historic District, a national historic district comprising 21 buildings, including what Suffolk County says is the oldest general store in the U.S. that is still under operation, and Deepwells Farm, both remnants of the early 19th century and owned by the county's Department of Parks, which purchased the properties around 1990 as part of a preservation effort.

The Saint James General Store has a unique place in the hearts of many in the area. It operates primarily as a gift shop and is known for its selection of old fashioned candy and toys, and visits from Santa Claus each weekend during the holiday season.

“Our four-year-old son thinks that Santa lives next door,” jokes Olivia Chmielewski, 35, who purchased the home next to the store with her husband, John Wilkinson, four years ago.

The couple, who moved from Ridgewood, Queens, and had been looking around the North Shore, in Oyster Bay, Huntington and Northport, fell in love with the home, with its thick, hand-carved front door, and the area’s history.

“The story definitely helped sell the house for us,” says, Wilkinson, 41. “It had a charm about it.”

The store was founded in 1857 by Ebenezer Smith, a descendant of Town of Smithtown founder Richard "Bull" Smith, who lived in the house next door at the time. The store supplied staple goods to the area's farmers and sailors, served as the local post office and was also home to the hamlet's first telephone in the late 19th century. A two-story addition was constructed by the early 1900s and the upstairs houses a book room, with volumes on the area’s history along with Victorian-era antiques.

In later years, the store was operated by Ebenezer Smith's son, Everett, and then taken over by Everett’s father-in-law, Karl Ericson, who operated the store until he was 90 years old.

Around 1959, the store was run by Louise and Andrew Havrisko, and by 1980 it was owned by John and Eleanor Oakley.

Famous visitors over the years have included architect Stanford White, who built the nearby Wetherill Estate in 1895 (it's currently on the market for $1.499 million), as well as Vaudeville stars, who spent summers in the area.

In 1845, prior to the store’s founding, Joel L.G. Smith, another Richard “Bull” Smith descendant, built Deepwells Farm, a 50-acre farm, which has had several owners in its 175-year history, including William J. Gaynor, the mayor of New York City from 1910 to 1913, who bought the property in 1905 from Clinton Smith, secretary of the New York City Parks Department. It is said that Gaynor named the property Deepwells for the two 125-foot wells on the property.

After the county purchased it, the store was run for many years by the Friends for Long Island's Heritage, a nonprofit preservation group, until the group filed for Chapter 7 bankruptcy protection in 2004.

The county now manages the store, and the Deepwells Farm Historical Society raises funds and organizes events in the farm’s Greek Revival home, including a haunted house, concerts and a holiday craft fair, and the rest of the property is used as a park. The society also works on restoration projects with the parks department's Division of Historic Services.

"It's a great partnership between the government and the private sector," says Scott Posner, president of the Deepwells Farm Historical Society, who remembers taking school trips to the store when he was growing up in East Northport. "The people that live in the community and saw a danger of Deepwells being closed down. It's the local volunteers that bear the biggest benefit of having these properties here."

The store is at the heart of this historic spot, with visitors who have patronized it for generations.

“About half of the people who walk through door are our regular customers,” says Karen Sheedy, the store’s merchandise manager. “We don’t know them by name, we know them by face.”

While the store no longer sell bonnets, hay and horse feed, it has an extensive selection of home goods, including tea towels and gourmet jams, and a back room filled with toys. Antiques and locally-made artwork line the walls.

“If they buy nothing else, they buy candy,” Sheedy says.

Erin Pulito, a lifelong resident of neighboring Smithtown, grew up going to the store, back when it was privately owned.

“We used to go there after church for the molasses lollipops, says Pulito, 59. “They always end up in Christmas stockings.”

Pulito visited the store on a recent afternoon to procure the molasses lollipops for a family member living in Georgia, who had spent summers in the area.

“It just brings backs memories and it’s someplace you want to bring out of town guests,” Pulito says. “It brings you back to your childhood.”

A little over a half-mile from the St. James General Store and Deepwells Farm lies another slice of history, and an architectural pedigree, which is currently for sale.

The unusual octagonal structure, with a gable topping each section of the octagon, was built in the shape of a Maltese Cross, says Nicole Petersen of Icon Properties, who is marketing the property. Wetherill was in the house for a couple of weeks when she asked White to add on a servant's wing, Petersen says.

The estate was added to the National Register of Historic Places in 1993 as a national historic district. The home is considered architecturally significant and the architectural plans are on file with the Museum of Modern Art.

"He was one of the first to do those cedar shake-type designs,” Petersen says.

The house has since fallen into disrepair, though investors have spent more than $100,000 to fix the home's roof.

"Most people want to see it preserved," Petersen says.