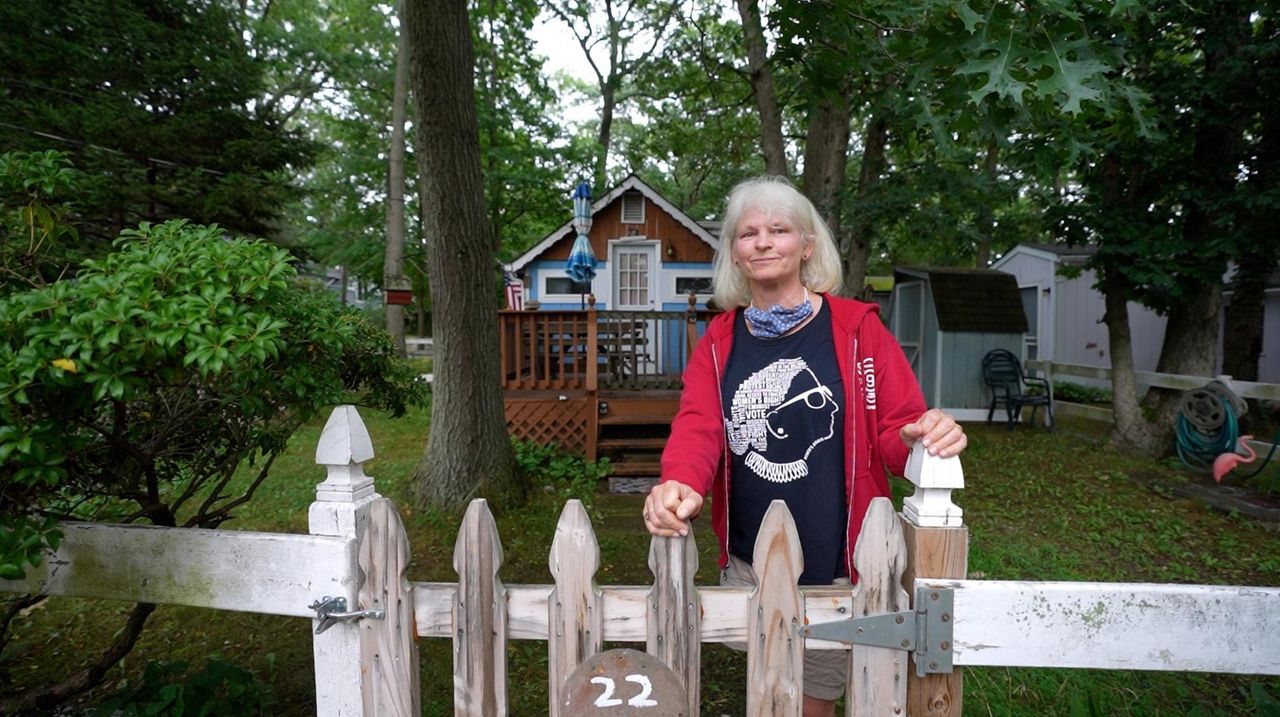 Jennifer Hoeppner remembers summer vacations at her grandparents’ one-bedroom cottage across from a potato farm in Wading River, where she learned to ride a bike, took swimming lessons in the Long Island Sound, played croquet and went to Friday night square dances with her extended family.

"It's still my happy place, my favorite place to be," said Hoeppner, 55, a retired teacher who lives in Long Beach. In addition to her grandparents’ cottage, now owned by her father, Ray Hoeppner Jr., 80, two other relatives bought their cottages on the site, Hulse Landing Cottages, and Jennifer bought hers eight years ago. The family jokingly refers to the place as their own Kennedy compound. The price tag for her vacation home on the East End, where homes easily list for $1 million or more, was $32,000.

Hoeppner’s third-generation purchase is part of what she and other long-term residents think of as a hidden treasure of the East End — four affordable seasonal vacation communities around Wildwood State Park in Wading River that were built around WWII.

"It’s a sweet gem that feels like a vacation in the country," said Hoeppner, whose grandparents Ray and Eileen Hoeppner were one of the original families. They came out from Greenpoint, Brooklyn, in the 1940s. "Hulse’s camp was always about spending time and making memories with my grandparents and family, and I hope my two daughters will continue the family tradition," she said.

Even before WWII, German, Irish and Italian families from Queens, Brooklyn and other parts of New York City would make the three-hour trek to Wildwood State Park to camp at the edge of the Long Island Sound on Hulse Landing Road. Over time the area became so popular that Wildwood limited stays to two weeks.

Enterprising nearby farmers started leasing spots on their property for people to pitch Army-grade canvas tents for the summer. Then they leased out platforms. Eventually summer residents started putting up walls with materials they brought from the city.

Today, these seaside cottages, many of which have the retro feel of the original campsites, range from 500 to 800 square feet. One bathroom is the standard because there isn’t room for more. The community, which is still solidly middle class, has become racially diverse, and residents still come from the city and other parts of Long Island.

Helene Mandzik, an agent with Little Bay Realty in Wading River, said the beachside camps operate from April 15 through Oct. 15. Residents buy their cottage and lease the land from the park owner, in the case of Hulse and Woodcliff Park Cottages, or pay into a co-op as with Sound Shore Club and Oakwood on the Sound. Cottage prices currently range from $50,000 to $350,000, depending on how close they are to the water. Fees, which range from $3,500 to $8,500, include water and garbage collection, as well as amenities, like a clubhouse or pool.

Houses do come on the market. But Michele Sanchez, an agent with Century 21 Castle Real Estate Property, said that because so many families pass houses down through generations, availability is scarce and they sell quickly. All sales must be cash because the camps are zoned as seasonal properties with the Town of Riverhead.

"You get a bill of sale for the cottages, but not a deed, since the land is not included. It's a simple transaction," Sanchez said. "The cottages are usually sold as is and most of them come completely furnished, down to the gardening tools."

OAKWOOD ON THE SOUND, WADING RIVER

Jerry Waters, president of the board, said his grandparents Margaret and John Puccio first came from Brooklyn in 1943 to rent a campsite for the summer at the end of Hulse Landing Road. His grandparents’ place was half tent and half wood. Everyone had to build outhouses because there wasn't running water until 1962, when the town required residents to install wells.

Ed Hulse, 74, and his wife, Astrid, 69, run Hulse Landing Cottages. The property has been in his family for eight generations and includes 1,800 feet of Sound beach, a half-mile walk from the cottages. His family had a farm on the same road as the state park. In the 1940s, his father, Jay Hulse, started storing people’s tents in his barn for the winter before they asked him to build platforms on the fallow part of his potato farm for the tents. His mother, Kitty, set up a store to sell produce to the residents and they eventually put in communal bathrooms, washing machines, a payphone and a spot for movie nights.

"Back in the ’50s and ’60s, husbands would drop their wives and kids off for the entire summer and come out on weekends," Hulse said. "It was, and still is, a great place for people to afford to live here for the summer. Many people now live here from April to October and then go to Florida for the winter."

Joe Columbo, 61, of Islip, spent his summers with his grandparents Joe and Emma Williams, who came out every summer from Ridgewood, Queens, starting in 1947. The house they eventually built on their campsite is still in his family, and he owns his own, which he bought in 1992 for $1,500, turning it into an 800-square-foot cottage.

"It’s probably worth $60,000 now, but I could never sell it. This is the greatest place to grow up in the world," Columbo said. "It’s a small community. Everybody knows everybody."

In 1938, five families who camped at Wildwood State Park bought the Penrose Estate, which was west of the park on what is now North Wading River Road. They paid $2,800 and let other campers know that sites were available. Fifty families chose sites and later built bungalows. By 1939 the owners had named their grounds Sound Shore Club. In 1978, it reverted to shareholder ownership and is still managed by an elected board of directors. There is now a private beach, basketball and paddle tennis courts, a community center, swimming pool and softball field. All expenses are shared by the owners.

Russell Ficken, an associate broker at Little Bay Realty in Wading River, said that homeowners buy their homes and own a share in the community. While many houses have been updated and rebuilt, there are still some original homes on the grounds. "Houses don’t come up for sale often because they pass them on for two, three and four generations because everybody remembers going there and they all love it and they use it," he said. "It's a cool spot to be, and it's nice for folks to come out and get away from the grind."

What is now known as Woodcliff Park Cottages started in 1949, when Benjamin Karlin set up a tent community outside Wildwood. The current owner, his son, Ben Karlin, said early vacationers were firefighters from New York City who formed a summer firehouse on the grounds. His father opened a general store, as well as a building with showers and bathrooms. Eventually he built cottages that he rented out for the season; others were built by the tenants or hired builders. "Our family lived in one of the cottages," said Karlin, who spent his summers doing roofing, carpentry and plumbing on the property.

There are 13 streets in the community that until 1996 weren’t even named, as well as a playground, a clubhouse and a private beach.

Theresa Butler of Ridge bought her 700-square-foot, two-bedroom, one-bath cottage there seven years ago for $50,000. Butler, a listing agent with Realty Connect USA, said she wanted a summer place on the East End.

She appreciates that she has an affordable vacation spot that is always available to her and the close-knit community whenever they want a dose of the East End.

"We bought it because at that point we lived in Levittown, so it was close enough to home, but far enough away to feel like we were on vacation on the North Fork of the Island," she said.