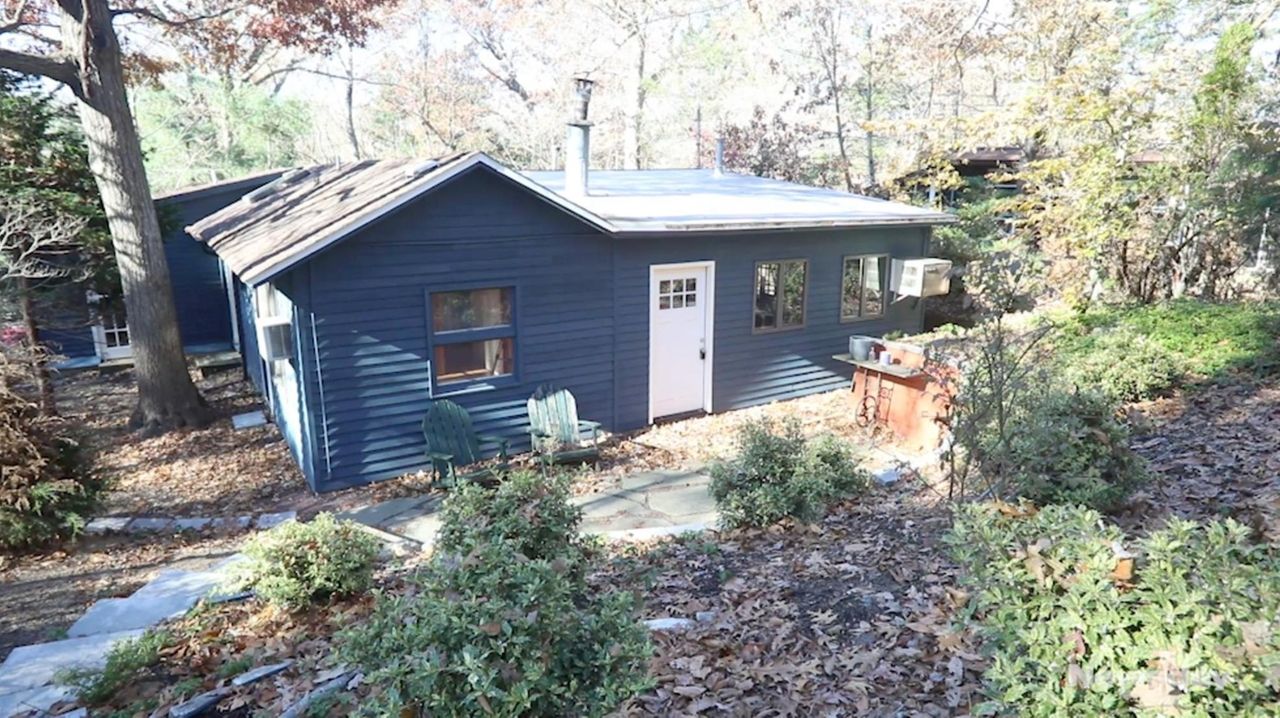 For the first time since the 1940s, the rustic Wading River home with a tree running through the center of the dining room is on sale. Peggy LoScalzo of Coldwell Banker M&D Good Life gave Newsday a tour of the house.  Credit: Morgan Campbell

A rustic Wading River home with an oak tree running through the center of the dining room was once home to a prominent 20th-century author. Now, it is for sale for the first time since the 1940s.

Built around 1926, the house part of a summer camp called Huckleberry Hills, says owner John Korman, 68, an artist and a gardener.

The camp opened in 1931 and operated throughout the 1930s, according to a 1935 Handbook of Summer Camps. For $150, 20 boys and girls ages 4 through 12, were able to come to the camp and learn about music, clay modeling and the nature that surrounds the campgrounds, the Handbook states.

The camp was comprised of four buildings, three for the campers and one main house, Korman says. The house that is for sale is still filled with features of the camp’s architecture, such as egress doors in every room.

Korman’s uncle Frank Safford, a doctor, bought the house in 1941, along with the three other houses that surround it, Korman says. The home for sale has been owned by the family ever since, he says.

After the family bought the house, it became a significant spot for the art community of New York, Korman says. Some of the most prominent artists, writers and intellectuals of the mid-20th-century spent time there, he says.

“Salon artists and interesting people were always coming in and out,” he says.

As a child, Korman's father and uncle told him stories of those who had lived there or visited before he was born, he says.

Korman says he was told the house was once home to writer Richard Wright, who is known for his novels “Native Son” and “Black Boy." Wright lived in the house in 1947, according to biographies of the author.

Another frequent visitor in the 1940s was the Tony Award-winning Broadway dancer, actor and choreographer Michael Kidd, Korman says. The family still has the birth announcement from the performer's second child, he says.

Sometime after Korman's family bought the house, they built an extension that has now become the dining room. The family built the room around a large oak tree that grew next to the home.

When the tree began to interfere with the structure of the house, it was cut down and sealed, Korman says.

A trunk now runs through the center of the dining room. It is so large that if you were to wrap your arms around it, your hands would not be able to touch, says listing real estate agent Peggy LoScalzo of Coldwell Banker M&D Good Life.

“This house is very eclectic,” she says. “It is for someone who likes something unique and different.”

Korman owns the house with his husband, Sean McGuinness, 65, who recently retired as a National Park ranger. Members of their family still live in the homes surrounding it, and the little neighborhood is a bright community, Korman says.

“It is filled with light and love and laughter,” he says.

The couple, who also own one of the homes next door, spends the winters in Jackson Hole, Wyoming. They decided to sell the home rather than renting it out, Korman says.

“You go there, and you feel like you’ve gone upstate,” she says. “The house is adorable.”