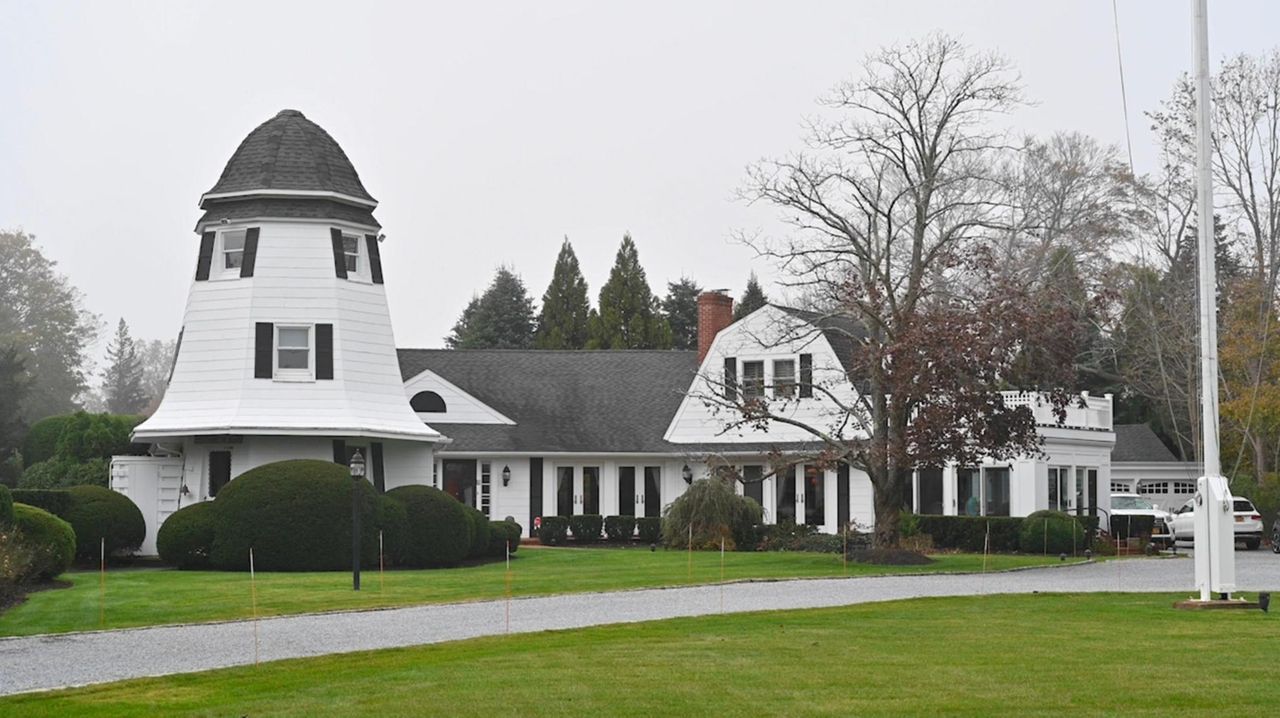 Some homes in Westhampton Beach have a unique feature — windmills that are remnants of the 19th century. Two are up for sale and one recently sold. Credit: Gordon Grant

Westhampton Beach, now known for stately homes with landscaped properties, was once dotted with so many windmills that pumped fresh water into local homes, it was nicknamed "the windmill town."

A 1902 map shows at least one per property, according to Dot Berdinka, collections manager of the Westhampton Historical Society.

But after the Quogue and Westhampton Water Company came into existence around 1898, creating a pumping station and holding tank, eventually windmills became unnecessary.

"By 1932 the area was divided into smaller properties and there were fewer windmills because they were of no use and to keep them was not practical," Berdinka said.

However, three original windmills remain today in Westhampton Beach, kept for decades by owners who recognized their historic value. Two were incorporated into the construction of homes currently on the market — 25 Seafield Lane and 15 Sunswyck Lane — and a third is a stand-alone at 32 Beach Lane, which sold in October for $5.65 million. All three are in walking distance to the beach on Dune Road and the village on Main Street.

Older homes "have a past that ties in with the rich history of a town and are often filled with charming architectural details," said Aimee Fitzpatrick Martin, a licensed associate with Saunders & Associates in Westhampton Beach, who is representing two of the windmill homes.

The fact that there are two windmill houses on the market is just a happy coincidence, she said.

"Both homes are priced well and sit on very large lots in the Estate Section of Westhampton Beach with easy access to the beach," Martin said. "They offer 21st-century Hamptons buyers a rare opportunity to either preserve, expand or rebuild to their own specifications and start their own history there."

While each home has the unique element of a historic windmill, they also have other features to make them stand out on the market.

Here’s a look at their past and present histories.

Former stable with a twist

The windmill then wasn’t attached to the house, as it is now.In 1900, what is now a 4,700-square-foot, five-bedroom, 5½-bath house was actually a stable. Today, four of the bedrooms are on one side of a window-filled hallway with original wood features, indicating it was likely where the horse stalls were, Berdinka said.

The house was last renovated in 2000 by the current owners, Ralph and Lynda Folz, and has a three-car detached garage, large fountain, koi pond with lily pads, a guest suite with deck, and a heated 20-by-40-foot gunite pool all on a landscaped 1.5-acre lot.

The once-working windmill tower has three floors. From the outside there’s an entrance to an indoor cabana. But Lynda Folz said the only access to the second and third floors of the tower is inside. The second story is a gym with a view of the Bay. A spiral staircase leads to a room that has a built-in bed and closet left by a previous owner.

Some of the original windmill blades were found in the attic.

The Folzes, who are both retired and spend part of the year in Florida, said they’re selling because they’re no longer in the area often. Lynda saId what has always been part of the charm of their home is how unique it is, and that for an old house, it has "remarkably large rooms. We have a dining room that seats 14 people comfortably."

Their location has always made them easy to identify, Ralph saId. "As soon as we tell people we live on Seafield Lane and we’re the house with the windmill, everybody knows which house that is."

Martin shares the listing with Laura Dalessandro of Saunders & Associates.

Windmill of their dreams

This house was built in 1894 for Desmond Dunne. Stephen P. Nash became the second owner. Around 60 years ago, it was bought by George McNeil, an FBI agent. His sister Joanie Blagdon, the current owner, inherited it from him in 1993. She saId her brother had told her that the windmill was once used as a working mill for grain and seed.

Blagdon's children competed in card games for sleeping rights in the windmill, she saId. "Whoever won got to sleep in the windmill bedroom," she said.

The windmill bedroom is accessible by a back stairwell that was originally the maid’s quarters. A trap door in the bedroom reveals the top of the windmill, which has all the original wood construction. The base of the windmill connects an attached three-bedroom guest cottage to the main house.

The 5,300-square-foot house, Blagdon said, has many hidden treasures that all date to the original: There’s a window seat in the dining room that lifts for storage, a front Dutch door with colorful bull's-eye glass, a butler’s pantry, wood floors and four working fireplaces. Three separate staircases lead to the second floor where there are eight bedrooms.

"We had to number them so people know where to sleep," she said.

Blagdon’s favorite is the fireplace room, where her brother often had puppies and a jigsaw puzzle was always in progress.

The house holds a lot of memories for her from the past 60 years, but since she lives in Massachusetts, it’s not practical for her to own it anymore.

The house and grounds on the 1.71-acre lot take up the whole street with a Har-Tru tennis court, gunite pool and pool house with laundry.

The house has a solid rental history and seems suitable for conversion to a bed-and-breakfast, said Martin, who shares the listing with Martha Lewis of Saunders & Associates.

The stand-alone windmill on this property, which was sold by listing agent Patrick Galway with Town & Country Real Estate on Oct. 15, can be seen from the guest room deck of 25 Seafield Lane.

According to Jeremy Wheaton, president of Hamptons Habitat Enterprises Corp., in Quogue, which redesigned and reconstructed the 1900 house in 2008, the windmill is octagonal and has three levels.

"A winding spiral stair takes you to the second floor and a somewhat precarious ladder climb yields access to the third level with an open ceiling to the underside of the dome roof structure," he said. "The overall exterior height is 34 feet."

Wheaton said though the windmill hadn’t been used for anything but storage for many years, it has a curious feature. "Someone went through a lot of effort to get a cast iron bathtub up the spiral staircase to the second floor," he said. "Yet there’s no water in the structure."

The original home was a backdrop in "Rocket Gibraltar," the 1988 film starring Burt Lancaster and featuring Patricia Clarkson, Kevin Spacey and Macaulay Culkin. It has six bedrooms, 6½ baths and is 7,057 square feet on a 1.93-acre lot.

New homeowner, David Caslow, has no plans to remove the windmill on his property, which also has the largest and oldest copper beech tree in the area.

"Our plan is to keep the windmill in its existing condition," he said. "We love the appearance and the feeling of tradition that it represents."