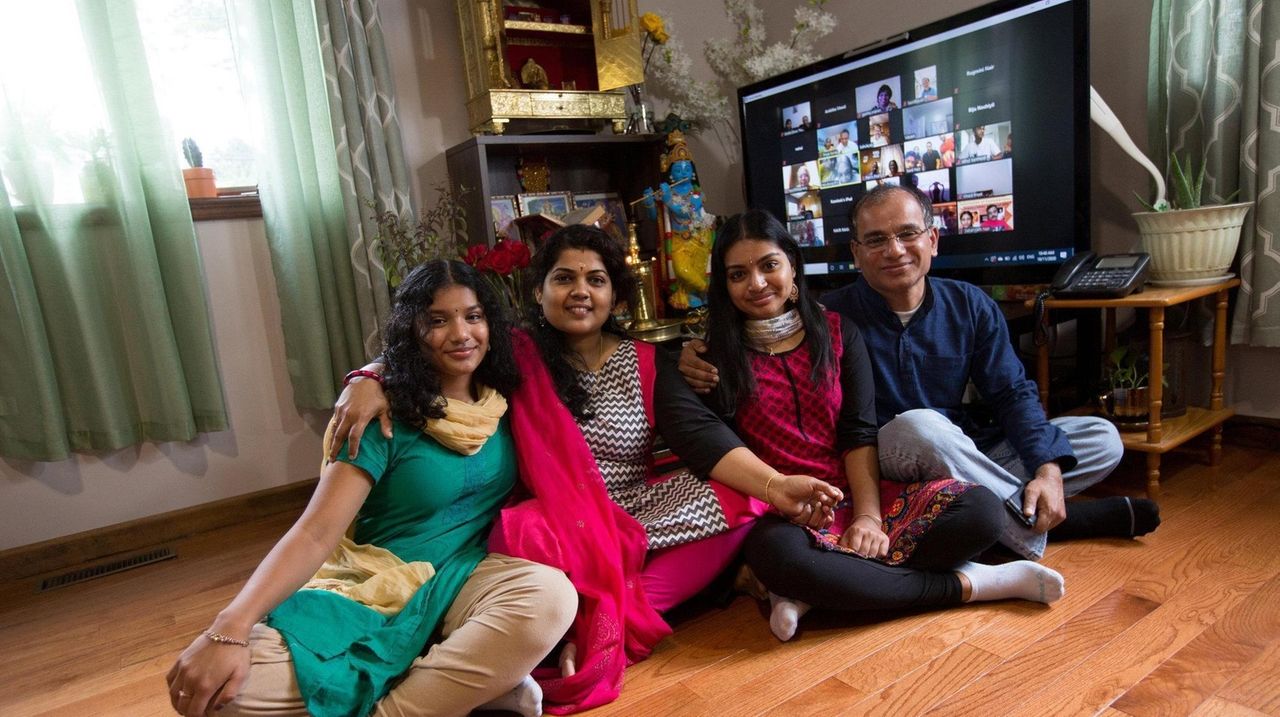 Many families around Long Island have adapted to the coronavirus pandemic by worshipping at home. The Preet family of Williston Park prays over Zoom and they and the Kaurs of Muttontown have devoted a portion of their home to pray at home. Credit: Jeff Bachner, Linda Rosier

For Harpal Kaur, the Sikh temple in Glen Cove is an inseparable part of her life.

The homemaker attends weekly prayers at the gurdwara, helps prepare and serve free meals at the community kitchen and has been involved in the ladies congregation since 2001.

Then came the pandemic, which closed houses of worship earlier this year. The lockdown left Kaur and her fellow congregants "feeling disconnected," as it did followers of other faiths, including Hindus, Muslims, Buddhists, Jews and Christians.

"In our religion, there is no middleman needed," said Kaur, 51, of Muttontown. "The whole teaching of Guru Granth Sahib-ji teaches us how to connect with God one to one."

The Sikhs believe in one God and their holy Scripture, the Guru Granth Sahib, contains 1,430 pages.

So, during the lockdown, Kaur and her community formed a WhatsApp group of about 25 members including the priest, to take turns reading from the holy book.

They also "prayed for the whole entire universe every day," Kaur said. "During this pandemic people were so scared so we thought let’s start praying for people. By doing this we kept ourselves busy, but also we were comforted and had peace of mind."

The restrictions on mass worship have only strengthened the devotion of Long Island’s religious communities — and in some cases have served as a teachable moment for their children who have been missing the temple gatherings. Some have modified their living space to be able to pray more at home.

And technology has proved to be a godsend.

Kaur and her fellow devotees use WhatsApp to do what they would do in the gurdwara in the privacy of their homes.

"Whoever wanted to participate in the prayers, I call them, and I tell them they can start from this page," she said, and "when they are done reading the 10, 20 or 30 or 40 pages" they let her know they are done and "then I update in the group. So, the next person can continue with the prayer."

Convenience is key. "People do it as they have time or any time of the day," Kaur said. It takes three to four weeks to finish the entire holy book.

Kaur also prays at home, which she shares with her husband, Charanjit Singh, son Davinder Singh, 31, daughter-in-law Lovepreet Kaur, 23, and her mother, Tarsem Kaur, 73. Her daughter Chahat Singh, 29, and another son Bhavneet Singh, 26, live in Manhattan.

Since pandemic restrictions started to ease on Long Island, Kaur has resumed going to the gurdwara. But she said: "The WhatsApp group recitation is still on. Because many are elderly, they are afraid to go to the gurdwara on a regular Sunday or any other time."

Saving on the commute

The Bootwala family’s Westbury living room has been doing double duty as a place of worship since mid-March. The family, which includes matriarch Zahra Bootwala, her husband and their three children, are members of the Dawoodi Bohras, a branch of Islam.

Before the pandemic, hundreds of members would meet in a rented community center, known as a markaz, in Queens. But for the last several months, families have switched to services via Zoom.

In a way, the switch to online worship has been a blessing, says Bootwala, saving them time on commuting and allowing them to take part more often in prayers.

"It’s pretty convenient. It has worked pretty well," said Bootwala, 40. "Depending on the events, we usually went [to the center] an average of two to three times a month. We’re participating in more events now."

So far, Bootwala says she has "no complaints" about the switch to home worship. The family has brought many of the traditions they would typically do at the center into their home, including dressing in religious attire and doing prayers on the floor on a sheet. During Ashura, a holiday observing the 10th day of the first month of the Muslim calendar, the family decorated their home with banners as they would have their community center.

Being able to practice the rituals of her faith have helped her stay "calm and strong" during the pandemic, says Bootwala. Being at home has also made it easier for the Bootwala children, ages 15, 12 and 2, to be more involved in the faith.

"It’s easier to explain to them certain things," Bootwala said. "In the community center, sometimes they’re with friends and don’t want to listen. Being home, they can focus more."

Vinod Preet really misses going to the Hindu temple in Flushing but during the pandemic, the puja area in the living room of his Williston Park home — replete with a mandap, or a religious altar, a statue of the Hindu god Krishna, and sacred texts — has become his holy ground.

"At home we were not regularly doing prayers or anything even though I tell my kids everyday they should be praying but after COVID the frequency has improved," Preet said. "My kids are setting aside time in the evening … sitting there and doing prayers and singing bhajans."

Things have only gotten better for the family — Preet, his wife, Sudheera Vinod, and their daughters, Arpitha Vinod and Ankitha Vinod.

"The frequency of sitting for prayers has improved after COVID for kids, and for me and my wife," Preet said. "The timing and type of prayers we do, that also has gone up …. We are learning new things also."

The family, members of the Malayali Hindu Mandalam, or MAHIMA, a congregation founded in 2001, used to attend religious events held by the group on Saturdays at a school auditorium in Floral Park where the kids learned language, culture and religion and the adults read and discussed Scriptures and religion.

But during the second week of the shutdown, Preet, an IT professional, started Zoom sessions as a way to continue the religious instruction and programs. "Just like me, many more new families have joined, praying together through Zoom. Kids, families, everybody together from their home."

The Zoom group has been meeting more frequently, with about 20 families participating at least three times a week.

Daughters Arpitha and Ankitha Vinod also teach a religious class. Arpitha said she has been "giving classes online to the kids, so they still can practice their religion. We’ve also been praying a lot more and faith has been more incorporated into my life because since there is a set time and with Zoom we can do more at home," she said.

As for Preet, "Even though Zoom has given more opportunity to explore new things nothing can substitute sitting together and praying," as well as the food and fellowship. "I do really miss going to the actual temple."

The live telecasts hosted by the Long Island Buddhist Meditation Center in Riverhead have been a lifeline for Rosemary Davis, who lives with her immunocompromised brother.

"I’m thankful [they do] this online. There’s a lot of suffering going on. If you don’t have any spirituality, how can you survive?" said Davis, who had been tuning in to the center’s online meditation classes even before the pandemic.

Some days Davis joins the center’s program, which consists of 15 minutes of meditation followed by a lesson, while on other days, she sits outside her Coram home and meditates for 30 minutes.

"I find it fulfilling to meditate in general, but I like to do it online because I’m with other people who are praying," Davis said. "It’s a nice feeling to know you’re not alone."

For Lisa Ramsland, a teacher at the center, the pandemic has encouraged her to be more intentional, helping to enhance the way she worships at her Riverhead home.

"Meditation was part of my life but I was always involved in a lot of things. This gave me an opportunity to slow down," said Ramsland, 47, who has continued working at a drug and alcohol rehab center in Westhampton through the pandemic. "It gave me more time to sit in meditation and make time for it. I wasn’t trying to rush through and fit everything in."

Not only has she taken part in the center’s livestreamed meditations, she’s also hosted her own. A sound healer, Ramsland conducted a Tibetan singing bowl session — aimed to increase relaxation and decrease stress — from her living room on Facebook Live. Not only did her video get a positive response, with people sharing it and viewing it multiple times, but Ramsland said it "helped me enhance my practice by sharing it with other people and reaping the benefits of slowing down myself."

"Church was my life," said Strati Demertzis, of East Norwich. As a longtime cantor and choir director, he was a friendly face at the Greek Orthodox Cathedral of Saint Paul in Hempstead every Sunday and on holidays. For the last seven years, he has also been traveling to different churches, filling in when a cantor was unavailable.

Though they now worship primarily via Zoom services from their couch, instead of a pew, Demertzis and his wife, Hope, say the change has been relatively convenient.

Their home already had an icon shelf with icons of Christ and various saints, and prayers have continued as normal, as that "doesn’t require a special building or anybody to lead it," Hope said. Strati continues to stand and kneel during the service, just as he would in the church building, and he also leaves comments on the livestream about inspiring homilies.

And while their faith has continued despite the change of venue, they do miss the atmosphere the church provides.

"In a Greek church, there is the smell of incense, the brightness of the candles," said Hope. "The minute you enter ... there’s a familiarity. You smell the incense and you know you’re home spiritually."

For Strati, the hardest adjustment has been a social one.

"When I want to be in touch with real people I go to the churches and participate as a cantor," said Strati, who has been attending in-person services twice a month since churches have reopened. "What the change really is is the camaraderie you feel with the people you know for many years. I’m missing the personal touch, to be with other people and to pray together."