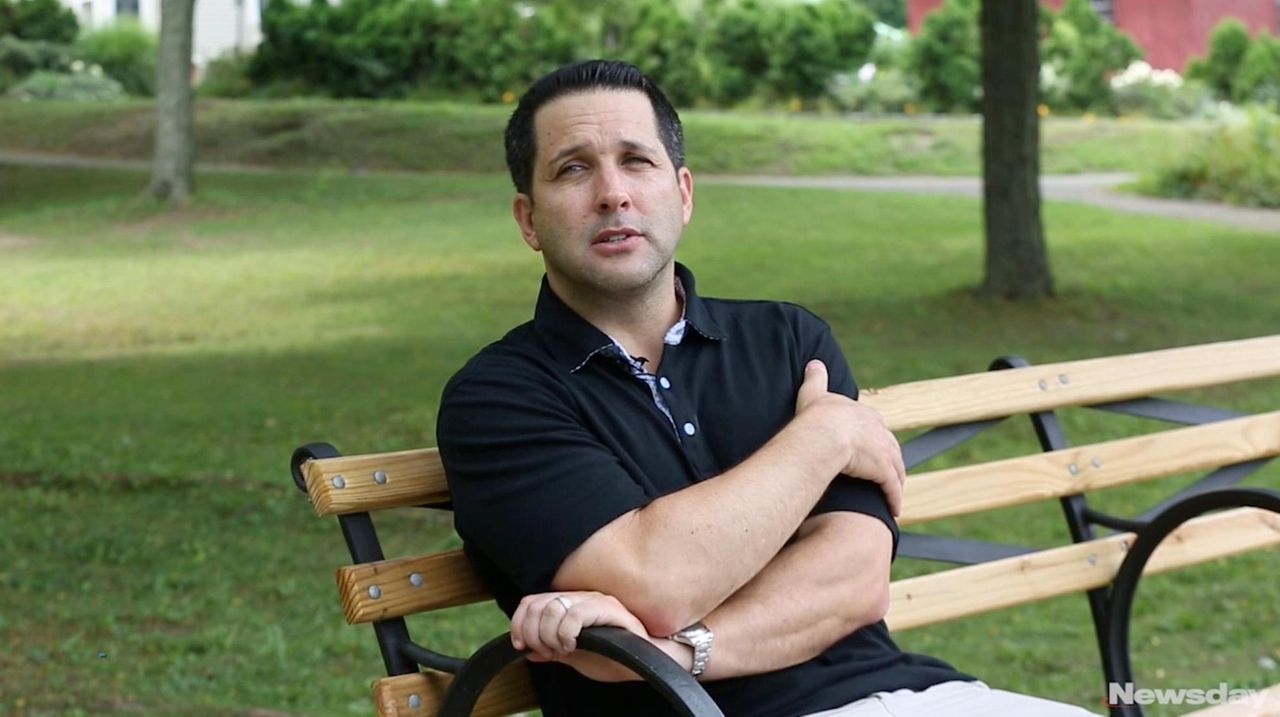 ESPN football analyst Adam Schefter has written a book about his wife's first husband, who died in the 9/11 attacks.  Credit: Yvonne Albinowski

In 2006, Adam Schefter was at the top of his game careerwise. After working as a reporter at The Denver Post covering the Broncos, he gained national prominence as a National Football League “insider” on the NFL Network, then ESPN. He appeared on TV, lived on Manhattan’s Upper West Side, but, with a disappointing romantic life that included a failed marriage, he was unsatisfied. Then a friend set him up on a blind date with a woman on Long Island.

On that evening in July, Sharri Maio made an announcement up front: She was a 9/11 widow raising a son, Devon, by herself. Her husband, Joe Maio, worked for Cantor Fitzgerald and was among the company’s 658 employees who died in the north tower of the World Trade Center, leaving her with a 15-month-old toddler. Her life, clearly, was complicated. Any man who got involved with her had to deal with her past.

Taken with Sharri, Schefter was up for the challenge. An 11-month courtship ended in marriage. The couple has one daughter, Dylan. Now Schefter has written a book, "The Man I Never Met" (St. Martin's Press, 196 pp., $26.99), documenting the unusual circumstances of his life, which, in many ways, is defined by a man he did not know. He spoke with Newsday by telephone; the conversation has been edited for length and clarity.

How did you come to write "The Man I Never Met"?

On the opening Sunday of the 2016 football season, ESPN ran a feature on my wife’s deceased husband. I couldn’t believe the response. Two straight days of emails and texts from hundreds of people from all walks of life — people in the White House, actors, actresses. Everyone was moved by the tribute to Joe. It was suggested that I turn the tribute into a book.

How is your marriage different from most marriages?

Every marriage has issues. But if you’re married to a 9/11 widow, it does seem everything is more accentuated. After 9/11, Sharri hasn’t enjoyed traveling. She gets anxious. She was diagnosed with Type 1 diabetes a year after the attacks. These are all fallouts from what happened. My hope was to make her as happy as possible and try to help replace what she lost. That’s difficult because Joe was such a great man.

A graduate of Boston University, Maio rose through the ranks at Cantor Fitzgerald to become director of equity derivatives. Tell me about him as a person.

Joe was a golden boy. He was charismatic. He was smart. He was successful. He was handsome. He was charming. He was sensitive. He was beloved. He was respected. Honestly, he was the kind of guy you’d want your daughter to marry. You might ask, how could anyone be that good? If you read the memorial tributes to him that poured in after he died, he was that good.

It has been one of the great honors of my life. It’s hard because you love him as your own, but Joe is still his biological father. So when a difficulty comes up you don’t always want to be as hard on him as maybe you would otherwise. There are challenges all the time. Sometimes I fall short. I’m sure there were times when Sharri was thinking — what would it be like if Joe were here? But there was nothing I could do about that. Devon is 18 and this fall he’ll be attending the University of Michigan, my alma mater. It was a decision I let him and his mother make.

Since your marriage, how has 9/11 changed for you?

It was always hard for me because I had friends who were killed. Once I married Sharri, the day took on added importance. I had a more acute understanding of what the day means. Not that I didn’t understand it already; I did. But it just became that much more painful and personal.

What would Joe Maio think of "The Man I Never Met"?

I’ve never stopped to think about that. My first thought is: Joe wouldn’t believe he could die because so many people thought he was invincible. If you could get past that — a fact that is hard to — I would hope he would be honored by the way we tried to remember him and the light in which we portrayed him. And I would hope that we did him proud.

WHAT Adam Schefter talks about “The Man I Never Met”

5:41
Biz Markie's best friend shares memories of the hip-hop artist
5:41
Two turntables and a microphone made Biz Markie a legend
Who's next? Jodie Whittaker to leave 'Doctor Who' in 2022
Margaret Cho joins cast of 'Fire Island' movie
7:26
The Buzz: Michael Bishop talks about 'Spin,' his upcoming Disney movie
PBS' 'Arthur' to end after its next season
Didn’t find what you were looking for?