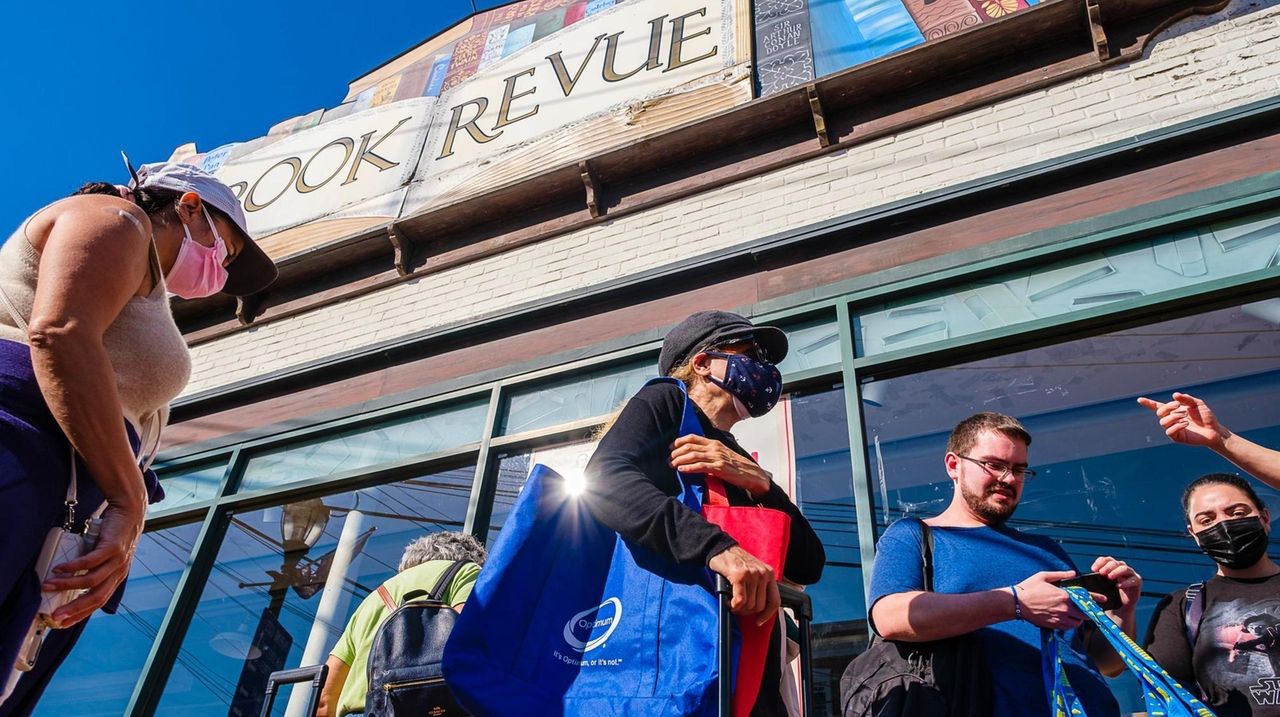 "It's been a great run, i think it's somehow fitting that it ends this way," Book Revue owner Richard Klein said as the last 10,000 books flew off the shelves of the Huntington store. Newsday's Steve Langford reports.  Credit: Newsday / Reece Williams; Jeff Bachner

There was a lot of judging a book by its cover at Book Revue in Huntington on Friday as the long-running village bookstore allowed customers to take its remaining stock free of charge.

The line snaked around New York Avenue and onto Main Street as customers awaited the 10 a.m. opening of the doors, after which hundreds swarmed into the store. Book Revue officially closed Thursday after 44 years as one of the centerpieces of the community and offered a last-day spree as an opportunity for customers to snag up the used books left behind.

Book-seekers brought grocery bags, burlap bags, rolling carts and suitcases and picked up psychological thrillers, history books, cookbooks and more. Some, like Kristen Nelson, 44, who works in the Northwell Health central billing office and lives in Deer Park, came with a game plan — she had a list of authors she planned to seek out. "I’m really hoping for some ‘Lord of the Rings’ action," she said.

Others, such as Tim Lau, 43, of Plainview, said he "looked at the cover and it was very intriguing" when he chose "Avoid Boring People," by James D. Watson and grabbed "Fire In The Lake: The Vietnamese and the Americans in Vietnam" by Frances FitzGerald because his wife, Melissa, 39, is Vietnamese.

Owner Richard Klein stood behind the counter and watched the activity on the two floors of the bookstore, where sections were marked for "Humor," "Performing Arts" and "Military History." One customer dropped a $50 bill into the counters' tips basket for the employees; another shook his hand and thanked him for what the store has done for the town.

Book Revue announced last month that it was being evicted by its landlord after struggling to pay rent as a result of the coronavirus pandemic.

"I didn’t know what to expect," said Klein, who added that the scene "feels right. Everything ends. This had to be done. I’m very happy to be making people happy and giving them books." The books available were all used books; new books had to be returned to the publishers, Klein said. Klein had tried to donate them to charity but couldn’t find any takers.

The choices people made Friday were eclectic. Dylan DeFeo, 26, of Northport, was one of the first people out of the store with his take. He’s a musician, and he was thrilled to find opera books. "I got 'La Boheme.' I got Verdi’s opera of ‘Macbeth.’ Not only does it have the score, but it also has pages of notes and stage direction," he said.

Mamun Rayhan, 25, a nurse from Levittown, recently married Nadia, 23, a music therapist. She laughed at his choice of "The Expectant Father" — they aren’t even pregnant, she said. Mildred Hodgson, who is in her 70s and lives in Amityville, hoped to find books about African American history. "I’m an avid reader. I’ve read every book James Baldwin ever wrote," she said.

Some people left disappointed — Jean Brown, 61, of Huntington, came with three carry-on sized suitcases hoping to fill them with children’s books for the Rye Public Library, which she said lost 7,000 children’s books due to flooding from Hurricane Ida. "Unfortunately, there was not a lot left by the time I got there," she said.

Emma Brech, 20, a student from East Northport, said she grew up going to Book Revue with her cousins and friends. She was looking for romance novels for them, and for historical fiction for her grandfather. "Anything that looks like something I might see on my grandpa’s bookshelf is going right in my bag," she said, adding, "I’m really sad. There’s a community associated with Book Revue."

Others echoed Brech. "People would go out to dinner, go get drinks, go to Book Revue, get a coffee. It’s been a part of our lives for a very long time, almost half a century, think of it that way," said Maureen Palmieri, 70, a retired professor from Greenlawn. "It’s a big loss for Huntington."