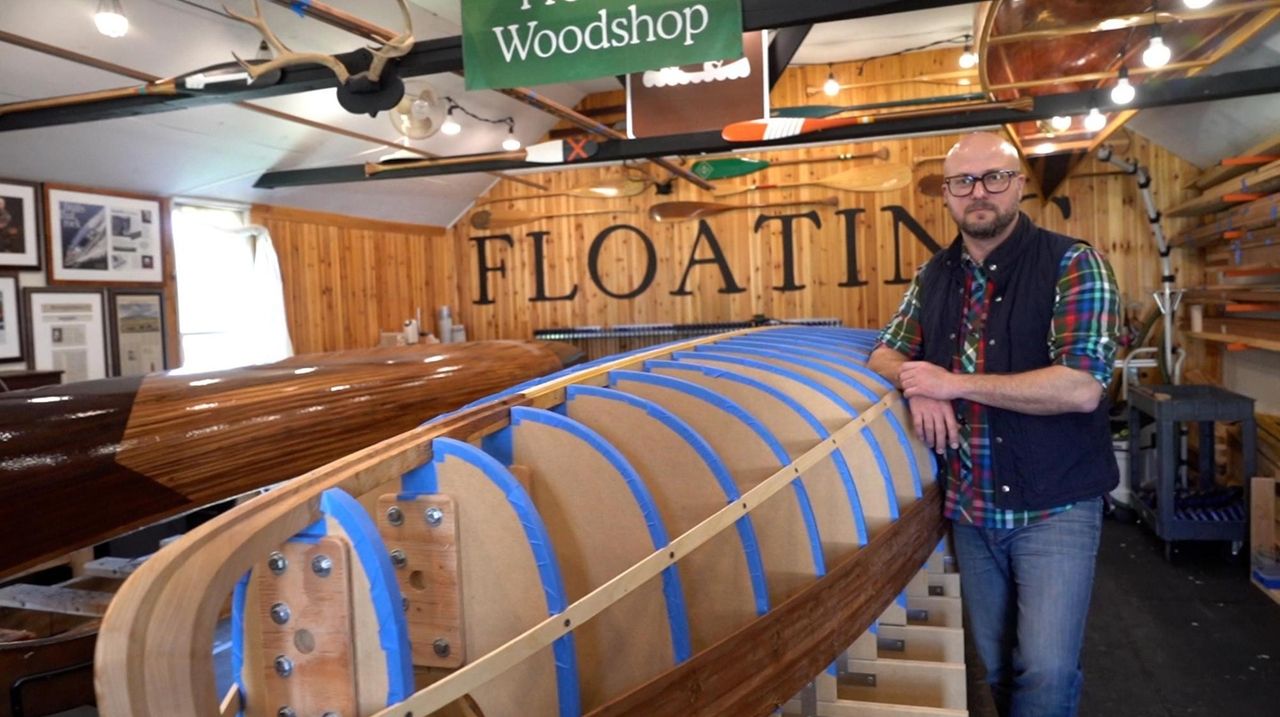 Trent Preszler, CEO of Bedell Cellars in Cutchogue and owner of Preszler Woodshop in Mattituck, talks about his memoir "Little and Often" and how building canoes using his father's tools changed his life. Credit: Randee Daddona

Trent Preszler came to Long Island for a job interview in 2003 and immediately fell in love.

"I’m still amazed all these years later that you can be 80 miles from Times Square, paddling in these pristine waters and feeling like you’re all alone," he says.

Preszler was living in a beach house on Peconic Bay in 2014, when a phone call from his estranged father launched him on the odyssey chronicled in his moving memoir, "Little and Often" (William Morrow, $26.99). His father died shortly after their tentative reconciliation, leaving him a set of tools with which Preszler decided to build a canoe. Speaking from his new home in Riverhead, he explained how that process helped him to better understand his father — and himself.

You write in an author’s note, "My greatest wish in writing this book is to help people." Can you elaborate?

I often wonder how different my life would be if I had heard a story like this when I was a boy. I didn’t have any mentors or anyone I could look to as an example of how to go through the world as an openly gay man. I hope that there will be gay kids or families that are struggling with these kinds of relationships who read this and find some glimmer of hope.

I’ve also been heartened by conversations with people who are not gay and maybe haven’t always had the best relations with their parents and have been driven by the book to have the sorts of conversations they’ve always wanted to have. I hope that by seeing my vulnerability and what I went through that people can see hope for whatever they’re struggling with.

You felt out of place as a boy in South Dakota but also as an adult in New York "too gay for the country but too country for the city." Did building the canoe heal that split?

Absolutely. I was able to bridge my young self and my grown-up self and, more importantly, I realized that I could just be my own man. One of my favorite lines in the book is when I finish the canoe and I feel that it’s speaking to me: "Whomever you made yourself into, that is who you always were." Who I am today is who I have always been, but there were parts I ignored or kept out of sight because I thought I had to act a certain way to fit into a certain crowd.

Using his tools also helped heal the split with your father, bringing back memories of how close you were when you were a child.

In the moment of building, there would be a limited thought like, "Oh, this is the rasp he used to shoe horses." The beauty of a memoir is that you can go back and dig through those memories. I kept iPhone pictures of everything, the stages of the boat and the tools, and those really helped me to go back five years and think, "What was I thinking when I took a picture of Dad’s rasp and surfed the web for pictures of horses?" It ended up being therapy for me twice; building the boat helped me bridge a lot of gaps in who I am, then writing it down crystallized all the lessons I had learned from that experience.

The most important lesson you learned from him was how to tackle hard problems one step at a time: "Little and often makes much."

Not just hard things; beautiful things also happen little and often: the way trees grow or a glacier scours the earth. I think it has universal applications for the human condition.

Building a canoe is definitely a matter of "little and often," and your memoir describes it in a lot of detail. Why was that important?

I didn’t want this to be just an emotional memoir about family, but I also didn’t want it to be a boatbuilding manual. I wanted readers to feel by the end of the book that they built a book, too. It wasn’t just, "I waved my hands and this boat happened"; they could actually experience why it was so excruciatingly hard. I hoped that would make the emotional parts of the story resonate more deeply. "We’re building a boat and we’re sanding and — what’s this about his Dad?" If I didn’t have these two themes to play off each other in the narrative, I don’t think it would have been a compelling story.