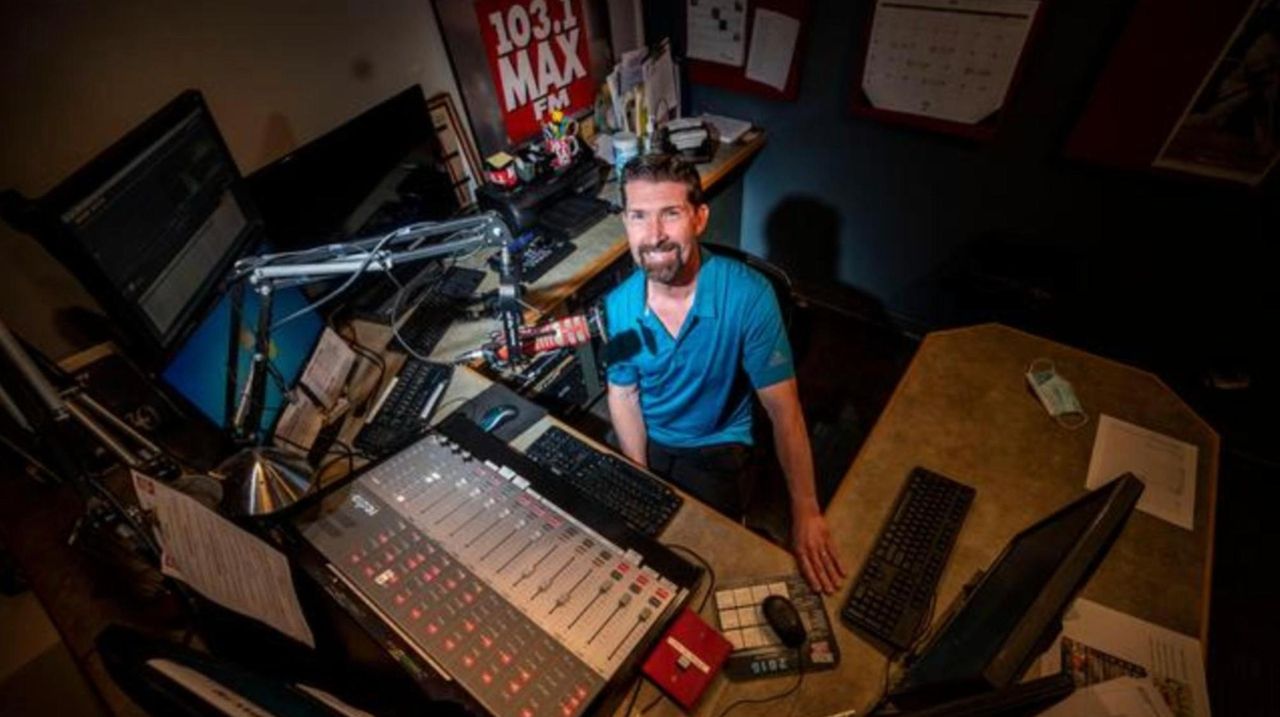 Jim Douglas is morning anchor at MAX-FM, a classic rock station in Farmingdale. Douglas has worked out of his studio these past few months and played a unique role during the pandemic, providing a sense of stability to listeners. Credit: Newsday / Alejandra Villa Loarca

Long Island radio fans know that radio these past few months has been a friend, information source, constant companion, comfort food, and also perhaps this: In a world turned upside-down, their favorite station and favorite host has remained rightside-up. Often in the middle of the night, that voice — that familiar voice — was still there. Still is.

Newsdaty's Verne Gay spoke recently to Douglas about just how upside-down his own world has been since March:

Have you been working from the studio or home?

In the studio every single day and I really enjoy it because if I'm at home I can't interact with the audience. [Besides] it's a huge complex and only two people in the building at a time …[The studio is] also located right above the Stew Leonard's wine store, and I think every radio station in America should be located above a liquor store.

How did you process all this back in March?

The company [Connoisseur] said you can do this at home and we'll set you up technically but again, I can't interact with viewers at home. Home by the way is Seaford, so I'm only about ten minutes away. This wasn't a big deal.

Why the studio versus a home studio?

I have all my toys at the radio station — the ability to record callers, edit them, play them back. I have all my music beds, my contest elements [Douglas runs two a day.] I really wanted to go in and try to make it sound like a normal day. The idea was, 'let's talk about what you're doing, the problems you're facing.'"

Obviously people are worried at best, panicked at worst. What role did you think you could play in that?

Well, just by going to the radio station and talking to people, that gave me an insight into how they're doing — what do they need? Their concerns? Things that perhaps you haven't thought of yet. The whole toilet paper thing! If anybody knows where to buy it, call me up and I'll put it out. You wouldn't believe the number of calls that came in. Or someone might call and say, 'there's a truck coming into the ShopRite in Manorville and should arrive by 8:30.' You could end up coordinating with different stores"about deliveries for various products.

Anyone you know directly affected by COVID-19?

Yah, yeah. I actually lost a couple of friends. Pretty shocking. Healthy people. I just kinda worked through that [and] didn't mention it on the air because we try to keep the show upbeat.

Humor seemed to be something you went to a lot.

I believe that if you give somebody an opportunity to say something funny, just let them do it. That really worked.

What did you learn about your listeners these past five months that you never knew before?

That they're smart and resourceful and they want to be funny. [A call-in] named Andrea as an example. She calls to say she's been quarantined with her husband, and that they've been together for decades, literally decades, and that just now noticed his chewing, 'and it's driving me crazy. He could chew through soup.' So that kind of thing …"

Without the office or cars stuck in drive-time traffic, where were people calling from?

I do get some essential workers calling in from their offices or from home, like 'Hi my name is Jane and I just got off the ICU shift at Good Sam, and I'd just like to ask you how things are going?' Sometimes it was grim. The calls mostly come after the contest and it's really very interesting because once you get past the contest element and 'congratulations you won the prize,' then I'd ask them about themselves and they're willing to open up.

I'm just a guy playing some music, having some fun. That's what it boils down to. I think our main goal is to be honest with you, not to generate fear or to repeat the fearful things you hear on the news [but] we would tell you where things were open and where to get pizza — just to let everyone know that there is some sort of normalcy going on and if you do want a slice, you should know where to go. Our goal was just to provide hope and a little comfort. If we're comfort food, we're burgers, fries and shakes. Particularly now.

What about you? What have you done to escape? I know you're a big golfer.