Matthew Lish is what’s known in circus lingo as a “First of May.”

The 19-year-old Hofstra University student started with Ringling Bros. and Barnum & Bailey’s “Circus Xtreme” in January. So for the past five months he’s had dues to pay. One of his responsibilities was to set up Clown Alley each time the mile-long circus train parked at a new location.

“It’s the most secretive place in the circus,” Lish said of the space where the clowns prepped for performances, donning red noses or floppy shoes or silly wigs. “No one is allowed in but the clowns.”

Lish used a hand truck to cart the steamer trunks loaded with each clown’s costumes, makeup and props. His own trunk contained his signature green glasses, his pinstripe vest, his cap.

New clowns are called First of Mays because in the old days, May 1 was the date circuses left their winter quarters to begin touring the country. For Lish, a First of May is all he will ever be. He learned just days into his 18-month contract that the circus, after 146 years, would be closing this May.

The company that owns the circus, Feld Entertainment, has two shows touring the country this season. Lish was part of Ringling’s Red unit, which performed “Circus Xtreme” for the last time May 7 in Providence, Rhode Island. The Blue Unit performs “Out of This World,” an outer space-themed show that will have its last performance May 21 at the renovated Nassau Coliseum.

That gave Lish just 15 cities and 128 shows in which to live out his lifelong dream — a dream he nearly squandered.

FROM CAMPUS TO ARENA

As the show toured up the East Coast, Lish lived in a room on the circus train — Car 32 — with eight other clowns who shared two bathrooms, two showers and a washer-dryer. Also in his car: Beth Walters, another First of May clown who happens to hail from Smithtown.

Lish’s room had a bunk bed, a fold-down table with two benches, a mini-fridge, microwave and sink. He ate in the “Pie Car,” essentially a diner. And he says he got “the best sleep of your life when you’re rocking back and forth.” 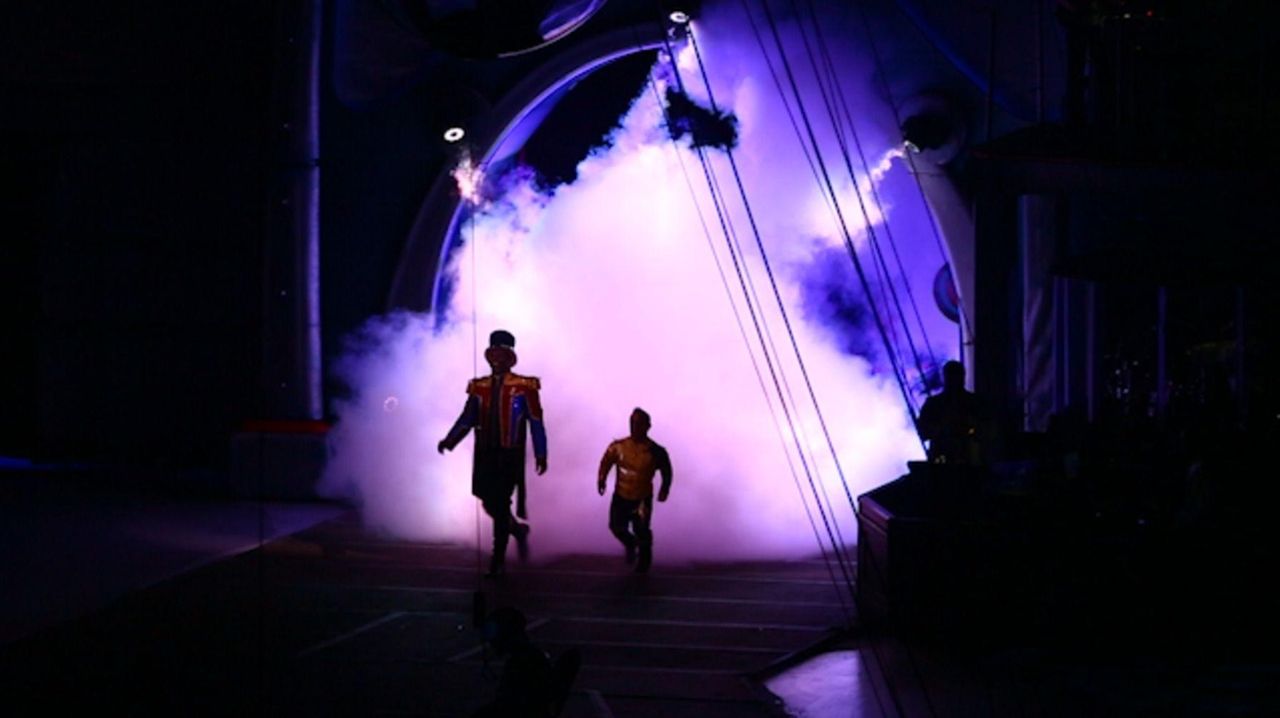 Ringling Bros. circus opens at the Nassau Coliseum On Friday, May 12, 2017 Ringling Bros. and Barnum & Bailey Circus, an American institution born 146 years ago, began its last run of performances Friday night at the new Nassau Coliseum. After more than a decade of legal battles with animal rights groups and a decision last May to pull its Asian elephants from shows, Ringling announced its closure in January following an unexpectedly sharp downturn in attendance. Credit: Newsday / Christopher Ware

Lish, who grew up in Fresh Meadows, Queens, earned his spot with the circus after practicing his clown skills throughout childhood. He also excelled academically — in 2015 he got a standing ovation for his valedictorian speech at Francis Lewis High School’s commencement by juggling a bowling ball, rat trap and egg, explaining it as a metaphor for perseverance in life. He won close to a full-tuition scholarship to study mechanical engineering at Hofstra.

That summer, Lish auditioned for the circus, thinking, “Let me get my foot in the door, so they know my name. They said, ‘So what are you doing in the fall?’ ”

Lish explained about his college scholarship and turned the job down. “As I’m going through school I still have this regret in the back of my mind,” Lish said. “What if I’d done that? How would life have been different?”

He asked to take leave from college to join the circus, and got the nod. “He’s such a brilliant student, I wasn’t worried about him not completing his education,” said Hofstra Honors College dean Warren Frisina.

On Jan. 10, Lish flew from JFK to Orlando International Airport with two pieces of luggage, his ukulele and a backpack. By the end of the week, word would come that the circus was ending.

Lish’s performances started an hour before each show, when ticket holders came onto the arena floor to interact with the performers. That was Lish’s favorite part. “It’s the time we get to make those one-on-one personal connections,” he said. He’d sign autographs and hand out free clown noses, sometimes on a pogo stick.

And then the show would begin.

“When our ringmaster says ‘Welcome to the Greatest Show on Earth’ and the pyrotechnics go off, I still get goose bumps,” Lish said. Energy levels were “through the roof” for the final performance, as performers delivered the audience “a piece of Americana,” Lish said. 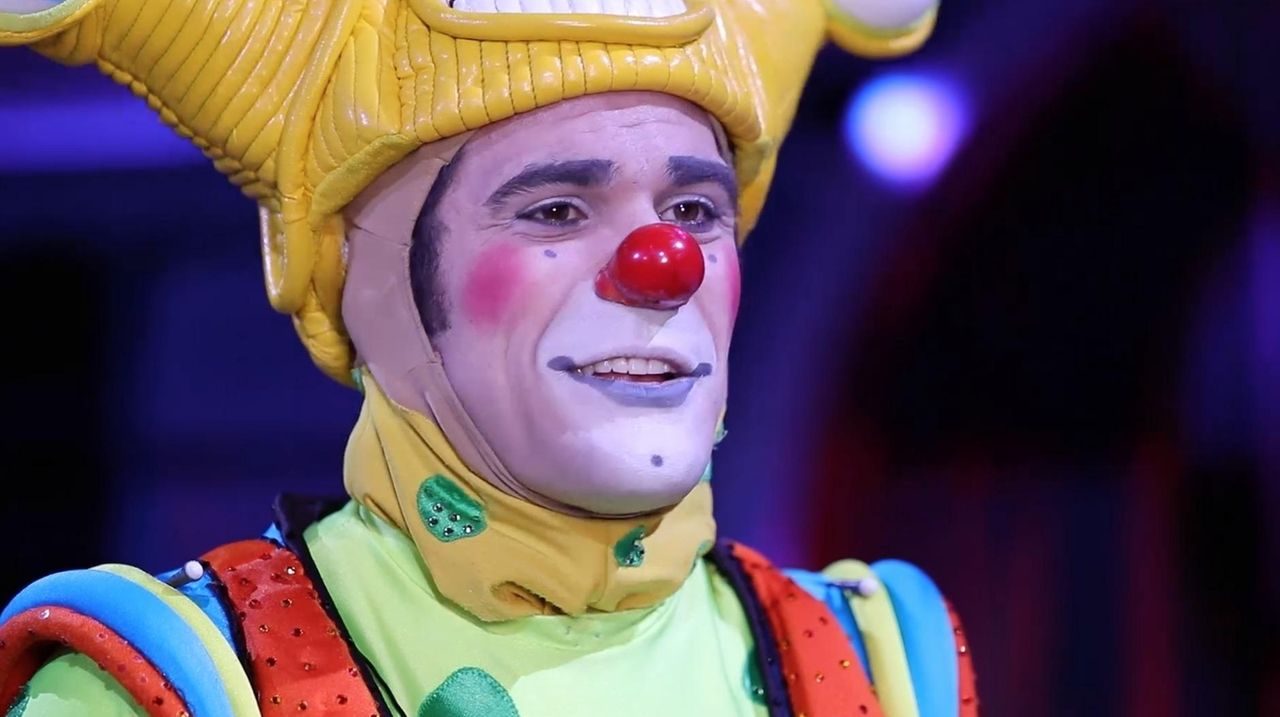 At the end of the very last night, the ringmaster brought the entire staff onto the arena floor to be applauded by the audience. Then the performers returned to the circus train to pack up and head home for good.

Lish is now back in Fresh Meadows and will return to Hofstra in the fall. But he plans to be in the audience at Nassau Coliseum on May 21, to watch the Blue Unit bring Ringling Bros. and Barnum & Bailey to its ultimate conclusion.

From do-it-yourself clown craft to the big top

Beth Walters is a self-taught clown. She learned to ride a unicycle by balancing between two parked cars on her Smithtown driveway. Juggling came via YouTube videos.

She landed a job with the Ringling Bros. and Barnum & Bailey Circus after earning a degree in communication and theater from SUNY Oneonta in 2016.

“It was the best feeling in the entire world,” Walters, 22, said of getting the gig as a clown. “I just cried so much because my dream was finally coming true.”

During her five months touring with “Circus Xtreme” Walters’ costume was a pink and purple dress with neon leggings. Her favorite act was when the clowns imitated the Mongolian Marvels — the show’s strongman act. “We have big medicine balls, we throw them. The music is a lot of fun. It gets some good laughs,” Walters said.

Learning her show would close on May 7 “was probably one of the most heartbreaking moments of my life,” Walters said. Her parents saw her first show in Orlando, and then the whole clan — Walters is the oldest of seven children — came to a performance in Wilkes-Barre, Pennsylvania.

For her next act, Walters plans to work this summer in the box office at the John W. Engeman Theatre in Northport. “We’ll see what happens from there,” she said. — Beth Whitehouse