Newsday reporter Faith Jessie profiled five performers about what life has been like during the COVID-19 pandemic and being unable to perform in front of an audience. Credit: Newsday

Intermission — for performers, it's usually a 15- or 20-minute break during a show. Thanks to the coronavirus pandemic, entertainers from classical musicians to Broadway actors have had to endure the longest intermission of their careers: 11 months and still counting.

For these five Long Island entertainers, the past year has certainly been challenging, and not just in a financial sense. Being able to again hear the intoxicating sounds of claps, cheers and laughter from an audience is what they’re most looking forward to once live performances finally resume.

In the meantime, let’s give them a big round of applause for telling their stories about coping during the pandemic and how they’ve found new creative outlets for sharing their talents.

These interviews, conducted by Rafer Guzman, David J. Criblez, Daniel Bubbeo and Verne Gay, have been condensed and edited for clarity.

Jasmine Gobourne was still feeling elated from her 2019 summertime run in a production of "Aida" at Northport's Engeman Theater when the pandemic put her career on pause. Gobourne, 27, hasn’t sat idle: She’s been taking voice lessons, teaching dance classes and even rehearsing — virtually — with the Caterina Rago Dance Company in Manhattan.

"[The pandemic] was just a shock to everyone. My life before that, I was working toward something. I was very busy, I was waking up every morning at 5 or 6 a.m. to get on the train and then come back home. And then everything just stopped. At first you just experience the uncertainty and fear. But after some time, I wanted to take advantage. I teach at a dance studio out here [Variations, in Huntington]. I teach from age five up to adults. I try to just give everyone hope and share some light and positivity to keep everybody uplifted during this time. After the initial shock, I decided to keep training. I just want to be prepared for when things do start coming to back normal and theater is open again. I always want to keep moving forward." — RAFER GUZMAN 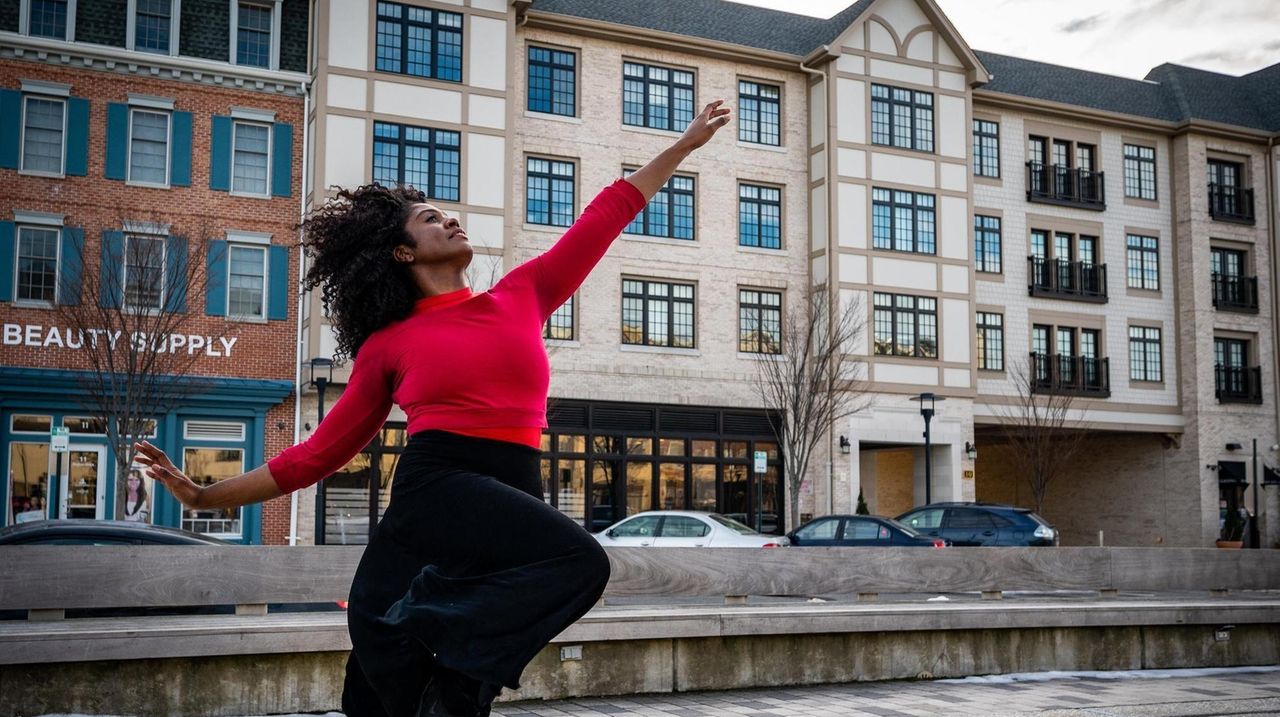 Annie "Mac" Seymour, 39, has been missing her musical family, local cover group Jellyband, for which she has sung and played flute and saxophone during the past eight years. The band typically performed two to three times a week, but in the past 10 months, it as only regrouped for three gigs, two outdoor and one virtual. However, she keeps her creative flame lit by teaching music.

"We used to go into the studio to jam and learn new songs. We don’t do that now because it’s not safe. But it has forced me to really sit with myself and focus more on my solo development. I’ll practice on different instruments to keep the creative juices flowing. We [the bandmates] text every once in a while. Sometimes on a Friday night, we will have a group text going and someone will chime in at 10:30 p.m. saying, ‘How about this for a set list?’ Pretending we are at a gig. Part of me feels like it’s just a really long week and I’m waiting for the weekend to come so I can play a gig. But that weekend never comes. There’s a magical, electric, unspoken communication that happens between us and the crowd. It’s a feeling like no other. I definitely miss that. We will see what the future brings. We are all still shellshocked from this thing." — DAVID J. CRIBLEZ 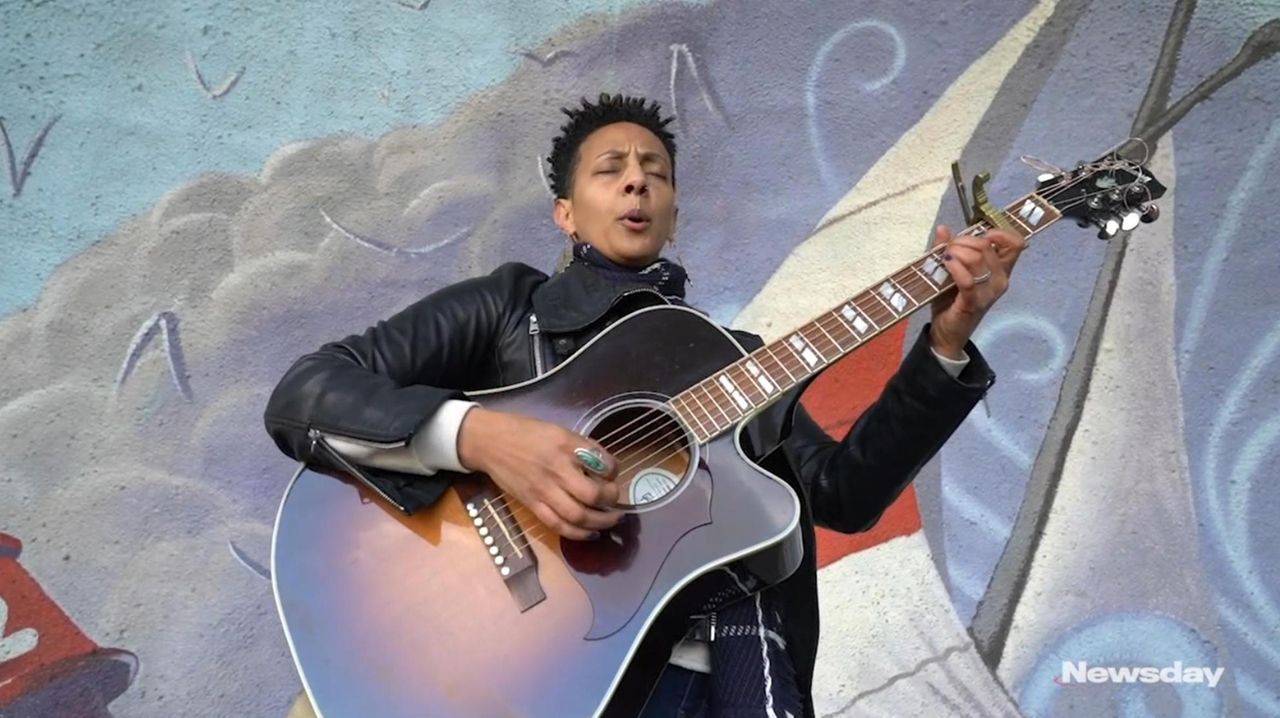 For Rick Caran, 75, of Northport, nothing brought more joy to him than the joy he and the canine crew of Team Jilli Dog — three Yorkshire terriers and a Mexican hairless (who actually has hair) — would bring to audiences wherever they performed. Whether it was star canine Ruby playing against — and usually beating — Caran at poker or all four pooches playing their version of basketball, Team Jilli Dog was always a hit doing events at Old Westbury Gardens, Long Island Pet Expo, Samantha's Li'l Bit of Heaven in East Northport, nursing homes and private parties. Since March, the dogs still get to go through their paces every day at home, but both Caran and his pups have missed having an audience.

"If somebody comes to the house to just drop something off, they [the dogs] go nuts. They're like, let's do a show. We play every night, maybe 15 or 20 minutes, and they love that, but when somebody walks in, they get crazy. Let's do tricks, let's do tricks. I have a fan page but have never developed it, so that's what we're working on now because you can get millions of people on that. I'm going to try doing more at home anyway. I can give tips. I actually get videos from Facebook friends now where they show me their dogs and I tell them my suggestions. We miss doing OId Westbury Gardens, we miss the outdoor shows. But we don't push the dogs. They're living beings and I don't like to put them on a heavy schedule. The home parties are easy because it's a lot like visiting people, but for the outdoor shows, they have to be there for an hour and half or two hours while we're setting up. People love them and they love the people." — DANIEL BUBBEO 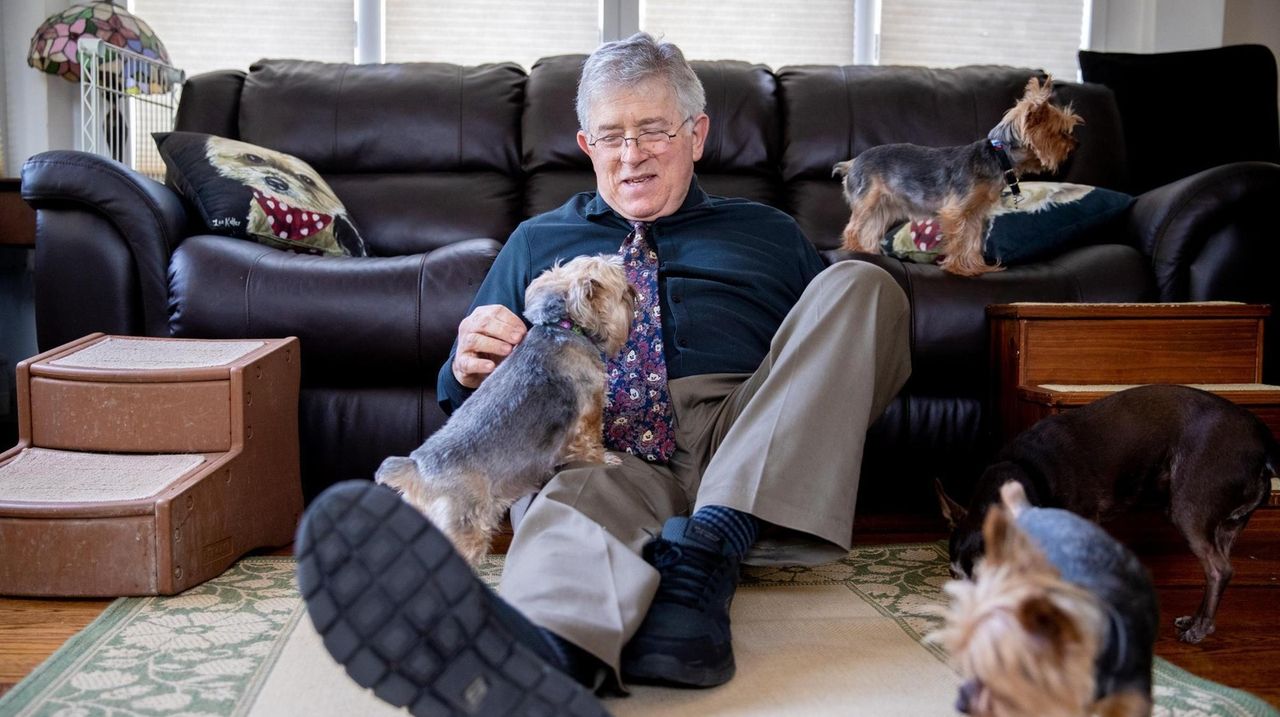 Makayla Joy Connolly, 14, starred as Lily Potter in the Broadway smash "Harry Potter and the Cursed Child." It was a dream come true — until the bitter reality of the coronavirus pandemic shut down Broadway in March. While she says she can't wait for Broadway to reopen, being quarantined has given her the chance to explore new creative avenues and also reconnect with family and friends.

" I miss the adrenaline of just going on stage and being onstage. There’s nothing like that audience interaction. I plan to continue with Broadway. I still keep doing auditions. Auditioning on Zoom has made me a lot more comfortable. I've been doing voice and dance training on Zoom, and I've been focusing more on studies. It [the pandemic] has given me more time to focus on myself than when I did Broadway. I wasn’t as close to my friends, so now I have more time to interact with them. I've been able to focus on life other than theater." — DANIEL BUBBEO 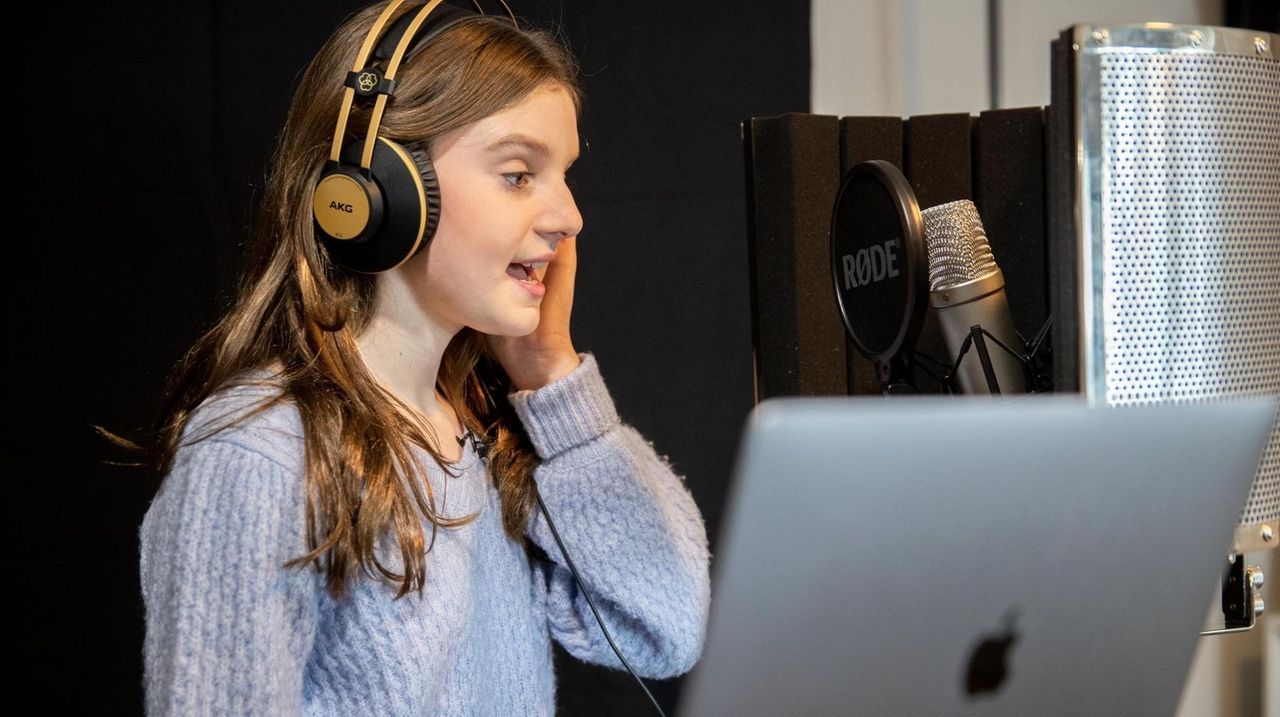 Deborah Sherman, 59, of East Northport, is a flutist and teacher, who had previously worked as a music librarian. She's married to Don Sherman, a former music teacher, now retired, is the mother of three adult children, two still in college and also musicians themselves — Gabriel, Ben, and Emily.

"I freelance and play in some larger ensembles, like the Long Island Wind Ensemble and Long Island Pops. I do it for love. When the pandemic hit, almost all of our students dropped out for a while and not until recently did they start to trickle back. That supplemental income is the difference between being able to pay bills. But I still feel lucky because the majority of our income was still coming from my husband's pension. This year we lost lots of relatives — two of my uncles — my father's brothers — and two of my husband's uncles as well as my grandfather and my husband's father. Music was therapeutic. We started to make videos on Facebook. We called older family members and did live concerts for them by phone or Facebook or Zoom. We'd also have concerts on the porch, including one where our neighbors gathered at the foot of the driveway. When you play with other musicians, it's a subtle kind of communion and communication — you're all speaking the same language through your art and there's nothing more exciting than doing it in a room with other musicians. I terribly miss that. I don't know of another musician who's not anxious to play with others again." — VERNE GAY 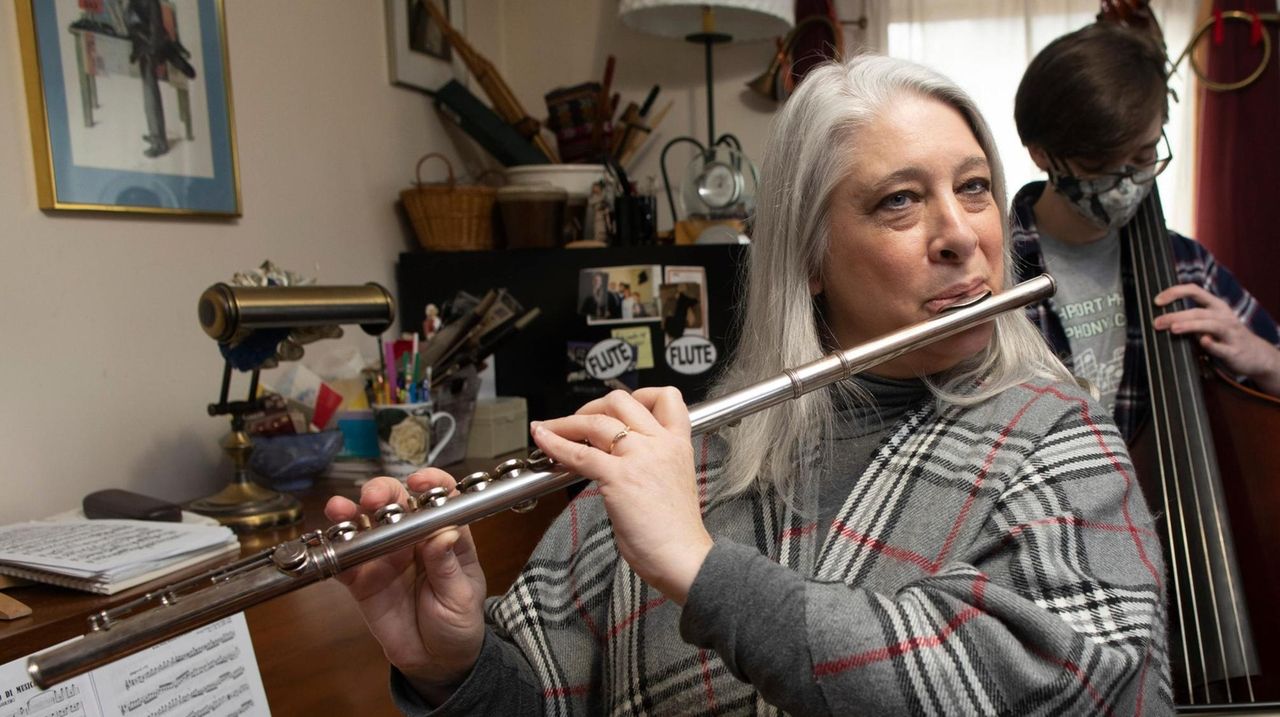